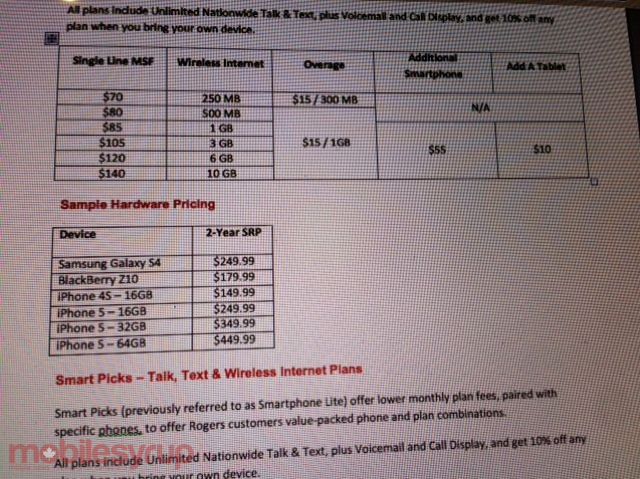 The CRTC’s new Wireless Code mandated all the wireless carriers to shift towards a 2-year contract terms by December 2nd. Bell went live last week, TELUS will be implementing a 2-year term on July 30th, Virgin is set for August 1st, and we can now confirm Rogers and Fido will go live with 2-year contract terms on August 9th.

According to the internal document we received it states that the new plans are “an evolution of the Simplified Plans we launched last Fall” and that the “2-year plans allow Rogers customers to pay off their FLEXTab balance (corresponding to the amount of any applicable device savings recovery fee) sooner, giving them the option to upgrade to a new phone, faster. These new monthly plans will launch August 9, 2013. This approach impacts all Consumer and Small Business Activations (non-MSD).”

Customers will have the choice of a month-to-month or a new 2-year price plan and receive a device subsidy. The hardware discount on a 2-year is similar to Bell and TELUS – for example, the Samsung Galaxy S4 and the 16GB iPhone 5 go to $249.99, other devices like the BlackBerry Z10 will be $179.99.

We’ve listed the complete pricing plans above, but all plans range from $70/month to $140/month and will include Unlimited Nationwide Talk & Text, Voicemail and Call Display, plus customers will be able to share data between plan members and devices (smartphone and tablets).

Rogers will also be coming out with a new hardware subsidy and price plan combo called ‘Smart Picks.’ This was previously known as the Smartphone Lite and will offer low-cost devices on a 2-year contract paired with Unlimited Nationwide Talk & Text, Voicemail and Call Display. The price plans will be $60 and $75/month. Taking a quick look at the doc shows a couple interesting points, specifically that Rogers has increased the data allowance and also added a new 10GB plan for $140 ($65 less than TELUS).