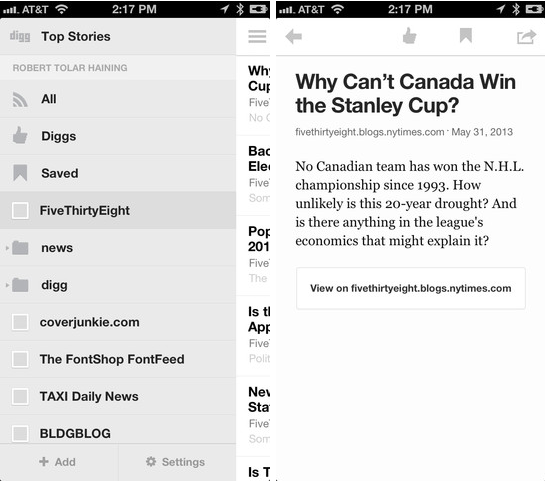 On the eve of Google Reader’s shutdown — it sunsets on July 1st — Digg has updated its official app with Digg Reader functionality.

Reader is tacked on, somewhat incongruously, to the app’s general functionality, but is a competent and minimalistic way to import your Google Reader feeds and scan through your lists. Itms can be “dugg,” which promotes that particular story, and you can save articles for later to services like Instapaper, Pocket or Readability.

The reading view is quite pleasing, with large, legible fonts and easy scrolling between articles. There are some features missing from the app, but considering it’s early days we’ll let them slide.

As for an Android app, Digg hopes to debut it in late July, though they’ve warned it may slip to August or “whenever it’s done.” The web-based version launched this week, too, which you can sign up for.

If you haven’t yet chosen a Google Reader replacement — we recommend giving Feedly a try, since it now works in so many cross-platform apps — Digg Reader is a competent and lightweight choice.