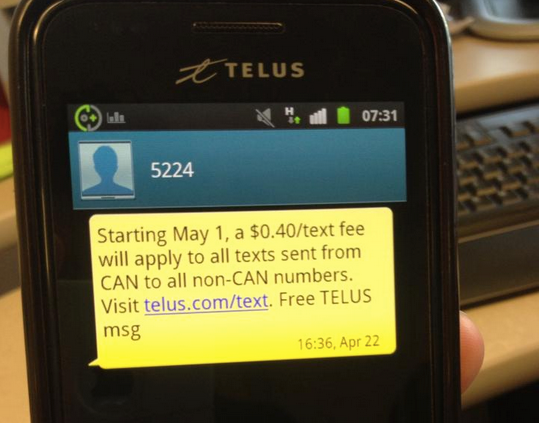 TELUS has announced that, as of May 1st, the cost of a text message sent to a US number while in Canada will increase 15 cents to 40c per SMS.

The company began alerting its customers via text and email yesterday, indicating that the change is due to increased costs of doing business with the carriers in the United States. To offset these costs, TELUS is offering a $5/month add-on pack for 100 international texts, and a $10/month pack for unlimited international texts. Domestic rates for those without any text plan remains the same at 25c/SMS, while international texts originating in the US or outside North America remain 60c each.

The other kicker is that TELUS is discontinuing US numbers as part of its “domestic” text package plans, so an add-on is now necessary to avoid paying overages. Received messages will continue to be 25c each while in Canada and 60c when outside the country, but having a $5 or $10 add-on makes incoming text messages free.

Rogers and Bell charge 35c per message to the US, and both carriers provide various packages between $5 and $15 for add-ons.