Apple: iPhone 5 users experiencing a “colored flare” on their pics should move “the camera slightly to change the position” 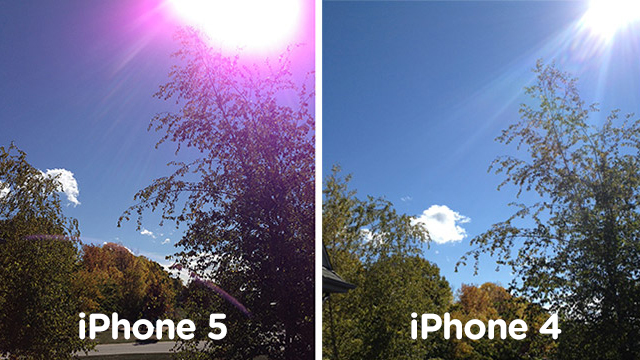 Over the past several weeks iPhone 5 users have reported that their new device has suffered from Wi-Fi issues, scuffs and scratches, lack luster maps, and even a “purple haze” on their pictures.

Apple has looked into all of these issues, specifically for the maps Apple’s CEO Tim Cook said they “fell short” and are working on making it better. The scratches and chips that some users are experiencing is apparently normal, Apple’s Phil Schiller reportedly stated in an email that “Any aluminum product may scratch or chip with use, exposing its natural silver color. That is normal.”

Today, Apple has come forward about the “purple haze” picture issue on their support forum. They noted that “A purplish or other colored flare, haze, or spot is imaged from out-of-scene bright light sources during still image or video capture.” The resolution to the issue, basically it’s a user error and to capture the perfect picture you’ll have to slightly re-position the camera to ensure the purple haze doesn’t appear. Here’s the full response:

“Most small cameras, including those in every generation of iPhone, may exhibit some form of flare at the edge of the frame when capturing an image with out-of-scene light sources. This can happen when a light source is positioned at an angle (usually just outside the field of view) so that it causes a reflection off the surfaces inside the camera module and onto the camera sensor. Moving the camera slightly to change the position at which the bright light is entering the lens, or shielding the lens with your hand, should minimize or eliminate the effect.”

The camera in the iPhone 5 is the same 8MP camera found in the 4S, but they’ve added a “Sapphire lens” and claim that it performs better in low lighting conditions. I can’t remember this issue happening on any previous iPhones. Has this “colored flare, haze, or spot” arrived on your pics?