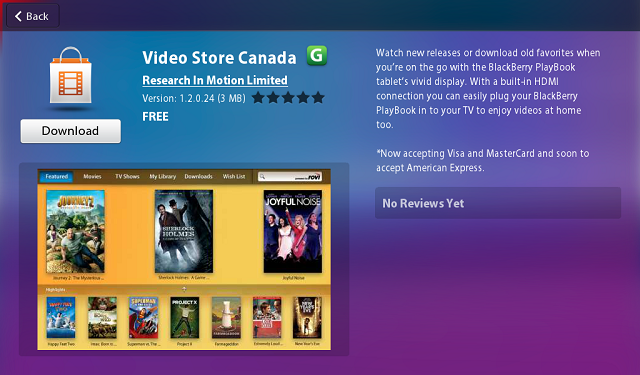 RIM’s BlackBerry PlayBook Video Store was previously available to those in the United States, but today it’s been released to us Canadians. In an email to us this morning RIM noted that PlayBook users in Canada can now watch movies and TV shows on their tablet.

The BlackBerry Video Store is currently at version 1.2.0.24 and is powered by Rovi Entertainment Service. In order to download the app you’ll need OS 2.0.1 or higher and the file size is 2698 KB.

“The BlackBerry Video Store offers a catalog of thousands of movies and TV shows with new releases available for purchase or rent. With the Video Store, customers have the option of streaming a trailer before making a purchase decision, and can also begin watching media as soon as they start to download a file. They won’t have to wait for the entire file to transfer before they can begin enjoying great entertainment on the tablet’s high resolution display or on an HDTV using the BlackBerry PlayBook tablet’s HDMI output.”

Download the app here from the BlackBerry App World
(Thanks Tyler!)