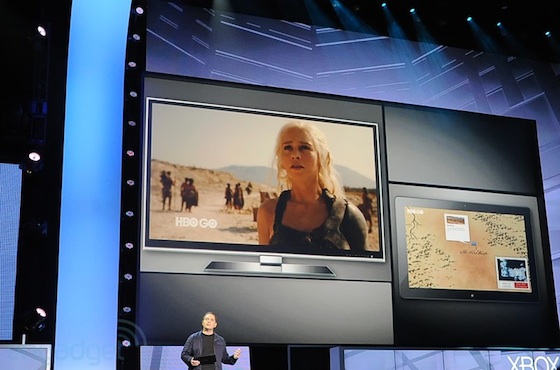 Microsoft has introduced its latest attempt to take over the living room in Xbox SmartGlass. The platform combines the video game console with Windows 8-powered tablets and PCs, as well as companion apps for Windows Phone, iOS and Android. The idea is to use your mobile device, whatever the format, as an accompaniment to what’s happening on the Xbox-connected television.

For example, Microsoft gave the example of watching the popular series Game of Thrones through its HBO portal while using SmartGlass on a Windows Phone or Windows 8 tablet to browser maps of Westeros (the fictional world of GoT, if you’re unfamiliar).

SmartGlass will also act as a sort of AirPlay for consoles, allowing you to “fling” content from your tablet or phone to your PC or your Xbox, and vice versa. In other words, it allows for content sharing while on the same network. Think Windows 7 HomeShare but for live media, not just files. The potential for Windows Phone gaming is there, too, as it will allow for your device to be used as either a dedicated controller or a second screen, much like the Nintendo DS and 3DS have a second non-touch screen for referencing game media.

The company will have more details on SmartGlass in the months leading up to the release of Windows 8, so if you’re an Xbox user or future Windows 8 owner, stay tuned.