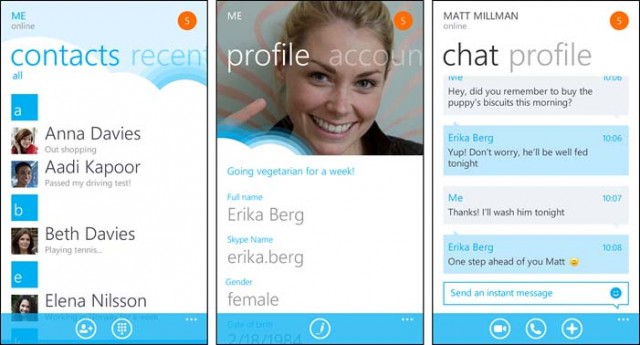 Skype for Windows Phone ambled into beta form earlier this year to mixed reviews. While the Microsoft-owned franchise was a shoe-in for Windows Phone integration, it was missing the key feature that was necessary to carry it over into the mainstream: background notifications. Unlike in Android and iOS, the Windows Phone client cannot receive calls or notifications when the app is closed, negating many of the reasons to use it in the first place.

This is owed to the fact that Microsoft has not in fact given developers any special API dispensation for VoIP apps, which Apple opened up in iOS 4 (and Android always had). But Skype version 1.0 is still a fully-realized affair, with the ability to add contacts, search the large Skype database and, perhaps best of all, call landlines.

Video calling quality is said to be mixed, any only a small number of second-generation devices came with a front-facing camera, but according to WPCentral the quality isn’t as high as Tango, an app that has become the de facto standard on Windows Phones.

If you’re a regular user of Skype, the release of version 1.0 will be a welcome occurrence.

Download it in the Windows Phone Marketplace.
Via: WPCentral