Canada’s HTC One X will not be quad-core, but here’s why it doesn’t matter 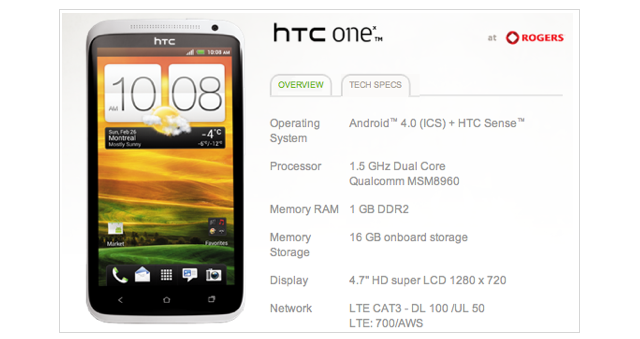 One of the more confounding realizations to come out of HTC’s MWC press conference was that the LTE version of the One X would not have a quad-core Tegra 3 processor like its HSPA+ equivalent. Instead it will be replete with a super-fast Qualcomm Snapdragon S4 processor, but of the dual-core variety. This is a similar situation in which we found ourselves with the North American release of the Samsung Galaxy Note, which had a Snapdragon S3 chip inside instead of the international version’s much faster Exynos SoC.

Why the change? It boils down mainly to the fact that the Tegra 3 chip is not yet ready for LTE integration. This will come later in 2012 by virtue of Nvidia’s purchase of Icera, but in the meantime Qualcomm’s MSM8960 SoC is one such solution that is ready for primetime. With full 2G/3G/LTE compatibility, the One X will come to Canada as the most network-friendly device to date. It will be able to work not only on Rogers/Bell/Telus’ 3G networks, but Wind’s, Mobilicity’s and Videotron’s in the AWS band. It will also be fully compatible with Rogers/Bell/Telus’ burgeoning LTE networks up to 100Mbps download and 50Mbps upload.

As for the speed disparity between the dual-core Snapdragon S4 and quad-core Tegra 3, the difference may not be that great. We took a look at some preliminary benchmarks of Qualcomm’s Snapdragon MSM8960 chipset and some of the results seemed too good to be true. In fact, in the next set of benchmarks, when Anandtech pitted the S4 developer device against Nvidia’s Tegra 3 in the Asus Transformer Prime, and the Snapdragon came out on top many a time. It will take until the One X is released in both LTE and non-LTE versions to compare apples to apples, but it seems North Americans are not going to be at a disadvantage this time around.

In many ways, the One X comes across as one of the most well-rounded HTC devices ever released. A photographer’s friend, a multitasking giant, a consummate media player, gaming machine, browsing force. Its 4.7-inch screen would have been considered a mini tablet two years ago, but now it’s just one more enormous smartphone.

Check out our full hands-on with the HTC One X.