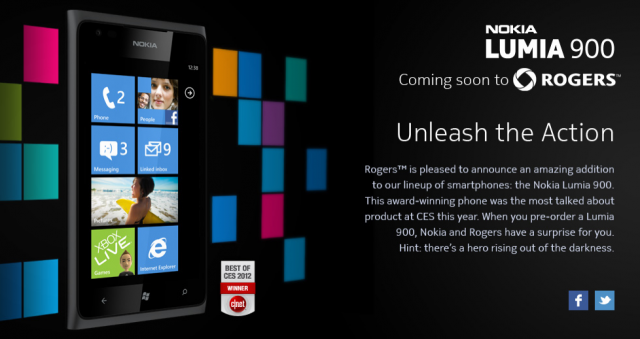 This is awesome. Rogers finally announced their plans to release the Nokia Lumia 900 – their flagship Windows Phone 7 device – in “the Spring”. We’ve been hearing it’ll be here time period, which at this point seems like a lifetime away of having a device “coming soon”. Update: Rogers will be releasing the Lumia 900 in April (video here).

In the meantime a dedicated Lumia 900 page has surfaced on the Rogers website. This gives you the opportunity to “register to know when the Nokia Lumia 900 is available for pre-order”. To keep people interested Rogers has also teasing a treat to those who eventually do pre-order. They give a hint, “there’s a hero rising out of the darkness”. Very interesting. I have my own guesses on what the “surprise” could be, but won’t spoil it (click here for those interested).