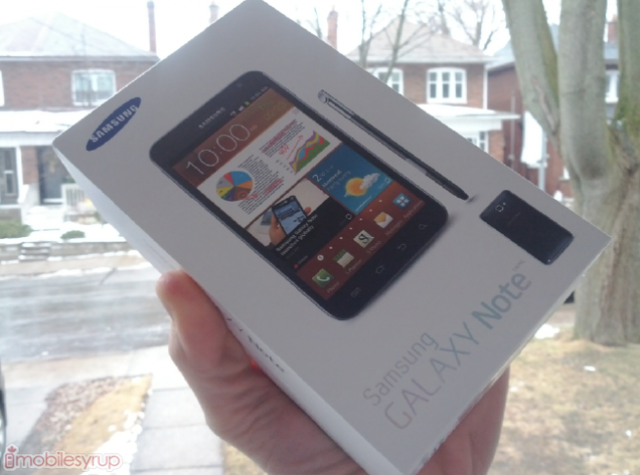 Update: This contest is now closed. We are happy to announce that the winner of the Samsung Galaxy Note is Twitter follower “What’s with Andy”. Congrats. We’ll have more contests coming up…

Here’s a contest for everyone to take note of – pun intended. Our Samsung Galaxy Note contest is ready to go and all the details are listed below.

First, this is a Bell version of the the Note. Second, as we stated in part one of our review, the Note is a Android OS 2.3 Gingerbread smartphone/tablet that will be upgraded to OS 4.0 sometime over the next few months. Apart from the usual features and specs that you’d expect – LTE, 1.5Ghz dual-core processor, S Pen, 8MP camera that records 1080p HD videos – the Note is also good for web browsing, gaming and Mobile TV… mainly because of the huge 5.3-inch display. Bell just announced that the Super Bowl had the biggest Mobile TV viewership in Canadian history.

So you wanna win this? All you have to do to enter this contest is: Follow us and re-tweet this contest on Twitter (@mobilesyrup), “Like Us” on Facebook (Facebook.com/MobileSyrup), or join us on Google +. All current Facebook, Twitter and Google + followers are automatically entered. This contest closes March 2nd and we’ll announce the winner shortly after.

Good luck to all!