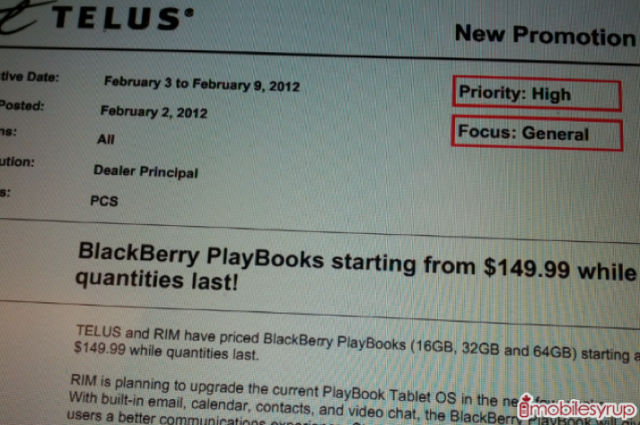 It was probably a good move if you’ve been sitting on the fence about getting the heavily discounted BlackBerry PlayBook. Over the past few weeks we’ve seen RIM’s tablet hit a low of $199.99, but starting tomorrow, for 1-week only, TELUS locations will be leading the way by selling the 16GB and 32GB PlayBook for a wickedly low $149.99! The 64GB version will stay the same price at $299.99. Bottom line… this is a mind-blowing good deal especially since PlayBook OS 2.0 is coming in a few weeks.

Update: This deal is now live on the TELUS site, hearing various reports that stock is incredibly low. Have fun hunting them down. Check it out here at TELUS

Update #2: We’re getting tips now that the 16GB and 32GB PlayBooks are now sold out across the country.