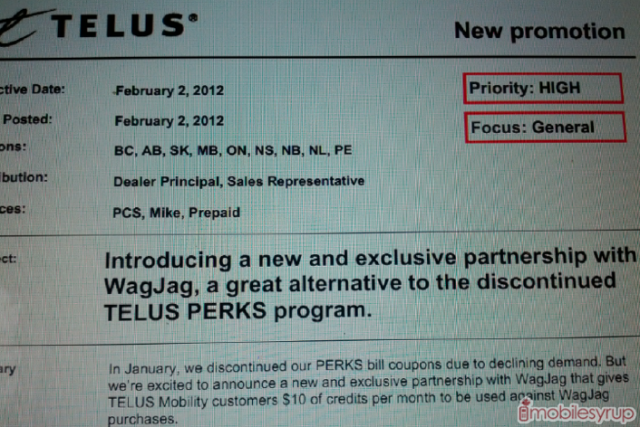 TELUS recently axed their PERKS program, the reason was caused by “declining demand”. It was a good service while it lasted and offered up various discounts on non-related TELUS products. The PERKS program officially ended on January 1st and there was no indication that their 7.2 million wireless subscribers would be seeing something in its place. While competing carriers opted to create their own daily deals site (Rogers has RDeals), TELUS has gone the route of exclusively partnering with Canadian daily deals site WagJag. Every month TELUS will give their customers $10 worth of credits to that they can put towards anything on WagJag. You’ll have to sign up on the WagJag & TELUS site (WagJag.com/TELUS – it’s not live yet) and the credits cannot be rolled into the next month. In addition, as WagJag is not available in Quebec, TELUS stated in the internal doc that “A solution for Quebec is forthcoming”.

Finally, TELUS steps it up by giving a bonus: “As a thank you to our TELUS mobility customers, each month we’re giving them $10 in credits that can be used towards any WagJag purchases in that month. That means on top of the already big discount from WagJag, customers can save another $10 off each and every month.”

Here’s how you’ll eventually be able to sign up:
Step 1: Visit WagJag registration page for TELUS: wagjag.com/telus
Step 2: Sign up for a WagJag account if you’re a new member or sign in to your existing account
Step 3: Enter your TELUS phone number and an SMS will be sent to your device with a promo code
Step 4: An SMS will be sent to the number entered.
Step 5: Enter the promo code to verify the number.
Step 6: Finished. The $10 credit will be in your account

Update: This is available to all TELUS mobility customers with a valid TELUS phone number, including prepaid, postpaid, business, corporate and consumer.