Report: 33% of mobile phone users have a smartphone 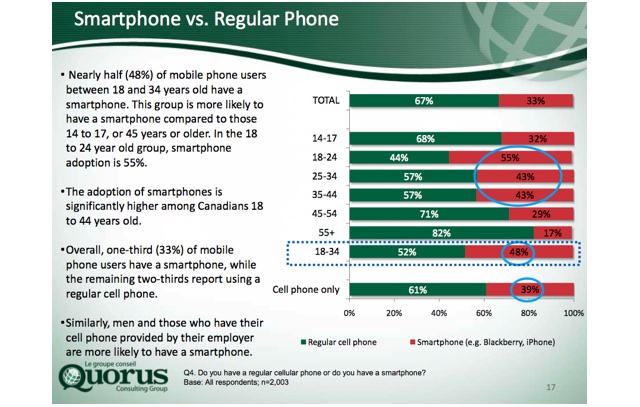 The “2011 Cell Phone Consumer Attitudes Study” was released today and it was completed by Quorus Consulting and the Canadian Wireless Telecommunications Association (CWTA). Over 2,400 Canadians were polled between March 14th and 27th, 2011 and reveals information on mobile phone usage, mobile banking and mobile giving. Here are a bunch of mobile stats for you:

About 58% of smartphone users said they have downloaded apps to their device, with an average of 12 apps (25% were purchased and others were free). When it comes to commerce on your mobile device it seems that security is the biggest concern, about 22% of smartphone users said they “do some of their banking or pay for products and services from their mobile phone”. 18% show interest in using their device at a point of sale terminal or scanner (NFC) but the number increases dramatically to 27% for those aged between 18 and 34. Half of mobile phone users are aware of mobile giving but only 6% have donated.

Regarding tablets: “5% have a tablet, and 2% have a tablet connected to a cellular network”. Not to shocking considering the timing of when the report was conducted, but still lower than I would have thought. IDC Canada predicts there will be “just shy of 1.5 million” tablets sold by the end of 2011 (iPad 2, XOOM, Galaxy Tab 10.1, TouchPad, Optimus Pad and PlayBook) so it’ll be interesting to see the stat next year.

Check out the full report here at the CWTA (PDF)