Canadian Government says no to the iPod tax: “It would hurt the economy, punish consumers and families” 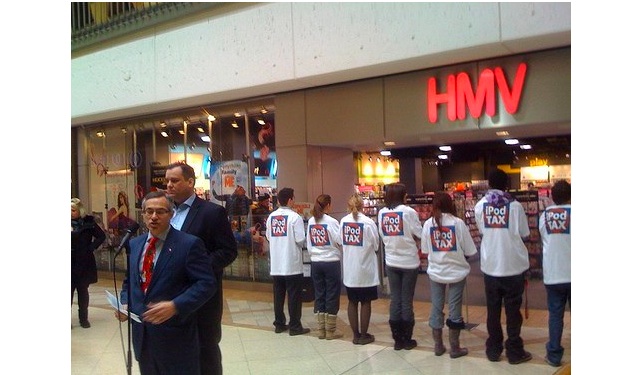 The outrageous “iPod Tax” was proposed way back in 1997 that would see a consumers pay between $25 to $75 for all blank digital media they purchase. Such devices include cassettes, CDs, MiniDiscs and now smartphones. The reason was to compensate for possible piracy. Good news came today from Ottawa… Industry Minister Tony Clement and the Minister of Canadian Heritage and Official Languages Honourable James Moore stated:

“We are here to confirm that the Harper Government will not bring in an iPod tax as part of its copyright legislation. The iPod Tax has been proposed and supported by all opposition parties. We simply cannot support the opposition’s massive new iPod Tax on Canadian music lovers. The iPod Tax would add up to $75 to the price of every mp3 player and smart phone on the market. It would hurt the economy, punish consumers and families, and send the wrong message during this fragile economic recovery.O ur government is committed to ensuring fairness and balance for consumers and creators as we update Canada’s copyright laws. The opposition’s iPod Tax is not fair to anyone. It would just make it more expensive for Canadians to listen to Canadian music and hurt our music industry.”

Bernard Lord, President and CEO of the Canadian Wireless Telecommunications Association (CWTA) congratualted the Government. He said in a release that “This is absolutely the right decision for consumers as the Government moves forward with its digital economy strategy. We don’t agree that law-abiding consumers should have to pay twice – once to legally download a song, and once again for the right to play it on a MP3 player or smartphone. There are also lots of uses for digital media players and smartphones that don’t involve playing recorded music, and this proposal would have unfairly penalized consumers that way too. The Government definitely got this right.”