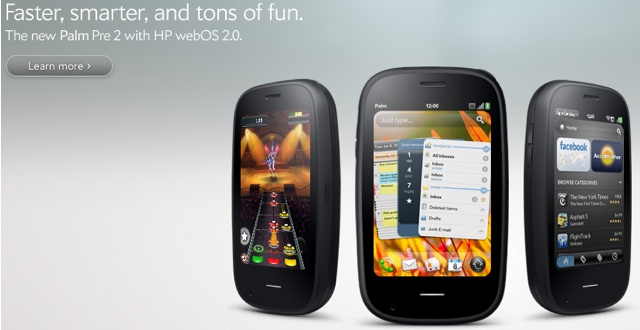 It’s now official… the Palm Pre 2 has been announced and will be powered by their webOS 2.0 In the press release HP (Palm’s parent company) has now re-branded Palm webOS to “HP webOS”. Thankfully they are keeping the Palm name alive though. HO states that “The first device to run webOS 2.0, HP’s new Palm Pre 2 smartphone, will be available on Friday in France from SFR and is scheduled to be available in the coming months in the United States from Verizon Wireless and in Canada”. No word on which Canadian carrier will be launching this yet.

The design is a flatter, mainly due to the new glass touchscreen. Other new features of the Pre 2 comes with a 1GHz processor and a 5 megapixel camera. Majority of all the other specs are the same as the original Pre. For webOS 2.0 this comes with what HP is now calling “True Multitasking”, “Just Type”, “HP Synergy” “Exhibition” and support for Adobe’s Flash Player 10.1 Beta.

Check the Palm Pre 2 out here over at Palm Canada