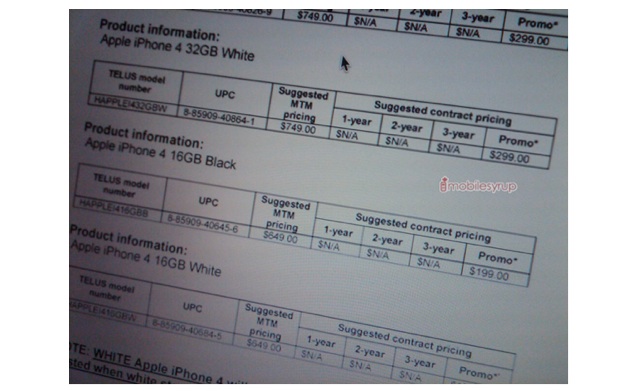 It looks like the price of the upcoming Apple iPhone might be a bit different that suggested earlier ($659 for the 16GB and $779 for the 32GB). Although the internal document we received has “suggested MTM pricing”, it shows TELUS has set the pricing to be as follows:

Note that TELUS does state that the white version will not be launching on the 30th. With the iPhone 4 launching on Friday none of the carriers have officially released device pricing or price plan promos… everything will fall into place shortly.

Update: It seems there’s a conversation going on over at Howard Forums that has the same pricing as above and that there are “limited quantites for launch, maximum of 10-15 units can be ordered for launch date pre-order.”