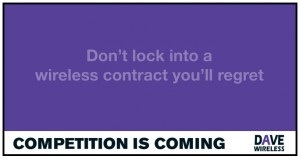 We get numerous e-mails sent to us about Dave Wireless (Data & Audio Visual Enterprises Wireless Inc.)… specifically about their anticipated launch date or the possible name they’ll go with when they actually do enter the market.

DAVE Wireless invested $243.1-million for 10 licenses during the Canadian Wireless Spectrum Auction and what we know about is the following: signed a roaming agreement with T-Mobile and Rogers; brought on Ericsson to design and build their 3G UMTS network; signed a cell-site sharing agreement with Bell and will launch their new network in their five most populous markets – Toronto, Vancouver, Calgary, Edmonton and Ottawa.

When it comes to the team leading the charge, Dave has a stellar cast. The Board of Directors is laced with talent. They have John Bitove who is the Chairman of DAVE Wireless, Paul Godfrey (National Post publisher), Michael Neuman (ex-Bell CEO), John R. Barnett (President of Rothmans Benson & Hedges) and Michael Moskowitz (President and CEO of XM Canada).

For the day to day operations you’ll hear more about these individuals in the coming weeks:

President of Dave Wireless is Dave Dobbin (used to be President of Toronto Hydro Telecom, COO of Telecom Ottawa and former owner of Telus’ largest dealer); Brandon Alexandroff is VP of Finance and came from AIM Trimark Investments; Stewart Lyons is the EVP of Customer Operations, Finance and Corporate (previously was EVP of XM Radio in Canada); Sharyn Gravelle is Vice President of Network Operations (she came from Toronto Hydro Telecom and was VP, before that Gravelle was at Microcell as the Director of Network Operations); Sara Moore is VP of Marketing but came from Rogers Wireless where she was VP of Customer Relationship Marketing and before that she headed Marketing over at Yahoo!; Ryan Lausman has the position of VP of Systems Operations (he was previously Director of Special Projects & Reporting at XM Radio); and finally Victor Viola, VP of Sales and Distribution (was previously General Manager LEAP Wireless).

Dave Wireless will be entering the market shortly and have expanded the list of positions they need to fill. You might want to check them out if you’re looking for a new gig. On the role description it states “… We’re excited about the untapped opportunities in this market as we prepare for our launch and embark on building Canada’s most dynamic and innovative wireless company.”

When it comes to price plans and how they’ll compete in the market, it’s currently known that Dave will offer phones with no-contract, unlimited voice & text messaging, free voice mail and long distance within Canada. Interested in what devices they are considering? Their bands are 1700/2100 so all one has do do is check out what T-Mobile in the U.S. has… some say even the Nexus One could eventually arrive on Dave.

When they do launch we’ll see a name change and there are several rumours flying around. They will in fact launching a new brand name and not a recognized wireless brand.

What are your thoughts on Dave Wireless and what name do you think they’ll go with?