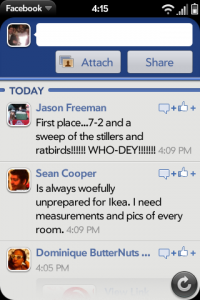 Canadians are one of the countries that use Facebook the most, and for those who have a Palm Pre (soon the Pixi) an official Facebook app has been released. Apparently it’s a basic first run at the real deal and for it to operate you have to have WebOS 1.3.1.

The features include the ability to update your status and upload photos, but can’t search the app for any info within Facebook such as events… when a video is shown you can click to play but it takes you out of the Facebook app and into the YouTube app. In addition, when clicking on a friends name or photo brings up their contact info, not what they are up to.

You would think Palm/Facebook would release a better first version, especially with the integration of Facebook with their Universal Search.