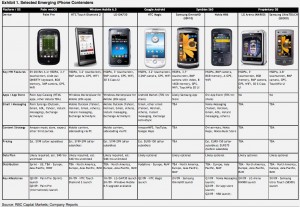 With Apple continuing to gain more Smartphone marketshare, the releases from last weeks Mobile World Congress has stirred up new conversations of some devices that could suddenly take the flame away from the beloved iPhone.

With all these new devices coming out, Abramsky believes this will force Apple to lower its pricing on the iPhone, or introduce new iPhone models. He also believes that Apple will develop a $99 device that will be released June or July of this year… however, Tim Cook, Apple CEO, said a few weeks ago about the iPhone Nano rumour: “You know us, we’re not going to play in the low-end voice phone business. That’s not who we are. That’s not why we’re here. We’ll let somebody do that, our goal is not to be the unit share leader in the phone industry. It is to build the best phone.”

Only time will tell who the real “iPhone killer” will be… perhaps it could very well be the anticipated Palm Pre.