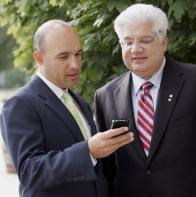 Crikey!! The Globe & Mail is reporting that the Ontario Securities Commission is seeking a record $100 million penalty from RIM’s co-CEO’s, Jim Balsillie & Mike Lazaridis for their role in a 1996 stock option accounting controversy.

If a full $100 million is to be paid out, this would rank as the largest penalty paid by individuals to the OSC.

“In 2007, a special committee of RIM’s board investigated the back-dating issue, and determined the company had backdated more than 40 per cent of stock options granted to employees since 1996. It also concluded that 12 of the 16 option grants made to Mr. Balsillie and Mr. Lazaridis between 1996 and 2006, to acquire a total of two million shares, were priced using an incorrect date.”