A choose-your-own-misadventure game, just in time for spooky szn 👻 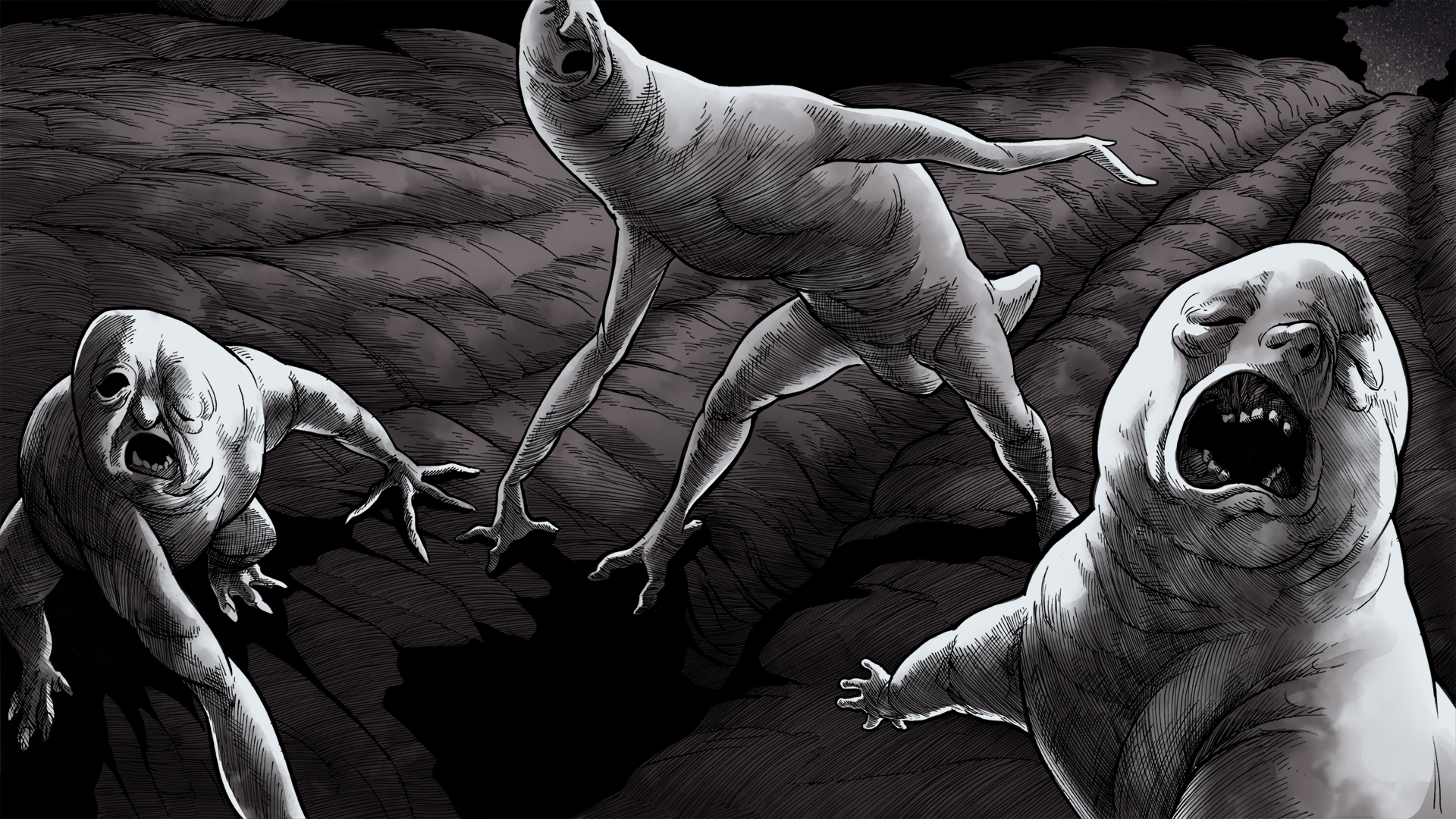 The story is simple: You, the player, have travelled to the small North Carolina mining town of Scarlet Hollow for your aunt’s funeral. Your cousin, Tabitha, is cold and brusque, the family’s ancestral home is literally crumbling off the cliff it was built on, the entire town is wary of you, and something truly terrible is festering in the local forest.

Scarlet Hollow is the brainchild of Ignatz award-winning cartoonist Abby Howard and her spouse, Tony Howard-Arias. The couple launched their two-person video game studio Black Tabby Games in October 2019, inspired by a conversation with a friend at New York Comic Con about horror dating simulations.

“Later on that night, Tony and I realized, ‘Okay, but like, what if we did do that?’,” recalled Abby, when I spoke to the duo over video recently. “Because Tony has some coding experience and visual novels are kind of like comic books.”

The idea changed a lot since then — for one, it’s not quite a dating simulator anymore, though there are some brief opportunities for romance squeezed between the bulbous, deformed animal corpses and vengeful subterranean ghouls.

What Scarlet Hollow is, however, is a genuinely unsettling choose-your-own-misadventure game with an engaging mystery for players to unspool and obsess over.

A (literal) marriage between comic books and computer coding

Scarlet Hollow is currently in early access on Steam, with the yet-unfinished story being released in chapters — not dissimilar to how comic book series are published and distributed as issues.

Funded by a successful Kickstarter campaign ($81,814 pledges from 2,726 backers, tripling their initial $25,000 goal), the game’s episodic release schedule is both practical for the two-person team, and a way to stay accountable to their backers.

“Since we’re a first-time studio, we thought it was good to be able to show our progress as we went along, instead of just disappearing for three years and having people wonder if we were a scam,” explained Abby. “I also wanted to see people have to work through the game’s mystery over time.”

Speaking of comics, we need to talk about the art in this visual novel. Namely, there’s a lot of it: from different backgrounds to a full emotional range of character sprites. In episode one alone, a single character — Stella, your cryptid-hunting would-be love interest — has a whopping 250 unique sprites. 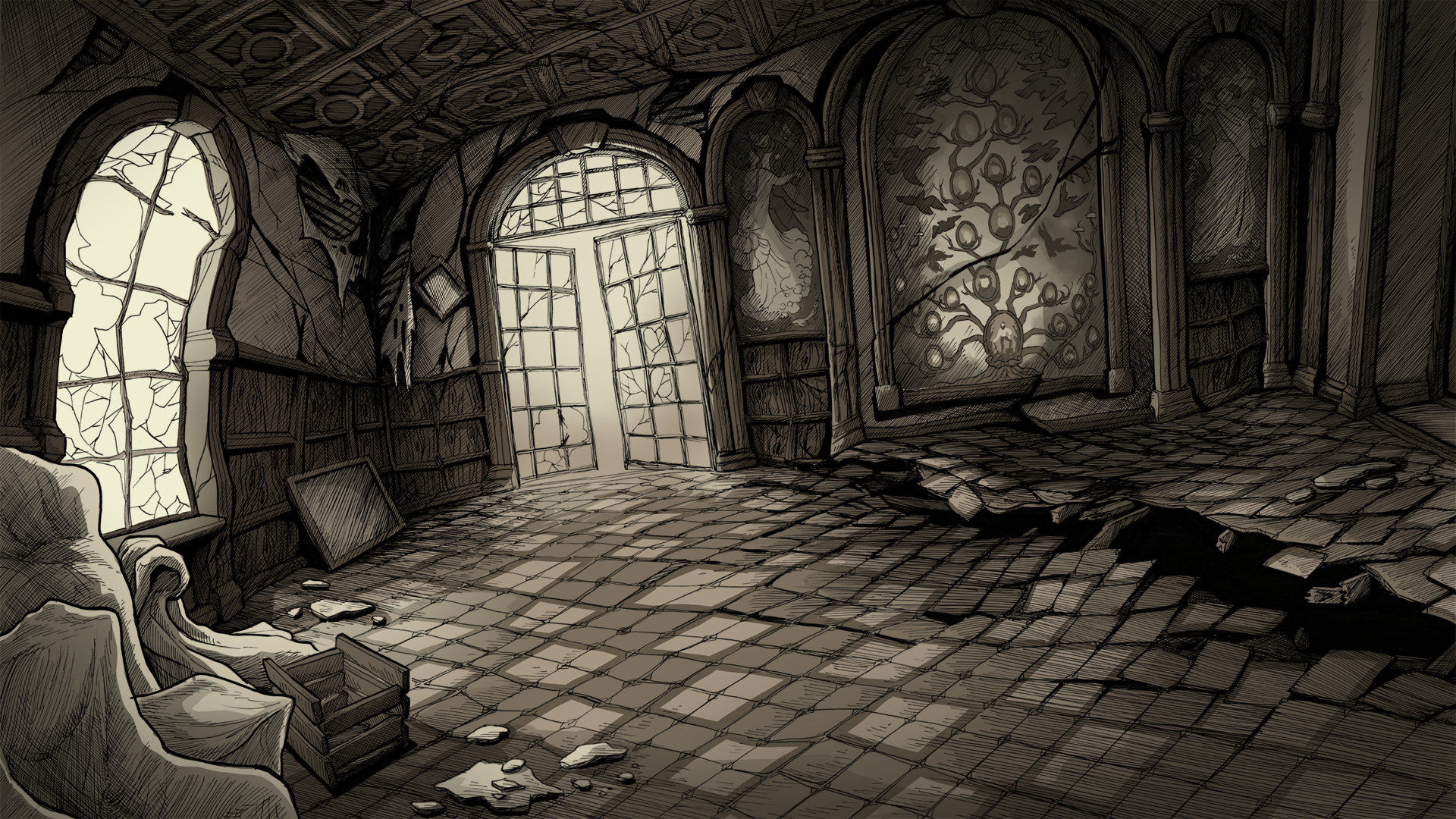 “We wanted to move away from the traditional visual novel format of ‘here’s a sprite pasted in front of a background’,” said Tony.

“We definitely wanted body language in there, we wanted to make it feel like they were really talking to you,” Abby elaborated. “And of course, we decided to do a Kickstarter stretch goal to have the characters change their clothes everyday, so I have to edit all those sprites for every episode so she’s wearing different clothes.

“She’s going to have a jumpsuit in this next chapter, and I’m very excited to draw that.”

As a visual novel game, you as the player are given dialogue options to choose between that reveal new information and story paths.

Scarlet Hollow throws an extra mechanic into the mix called ‘traits,’ which give your character unique ways to explore the mystery further.

Traits include ‘Mystical,’ which lets you read minds; ‘Powerful Build,’ so you can muscle your way out of tough spots; and ‘Hot’ which — just like being hot in real life — makes NPCs respond more positively to you, regardless of your actions.

The trait system is designed by Tony, and inspired by games like Fallout: New Vegas and the Divinity: Original Sin series. 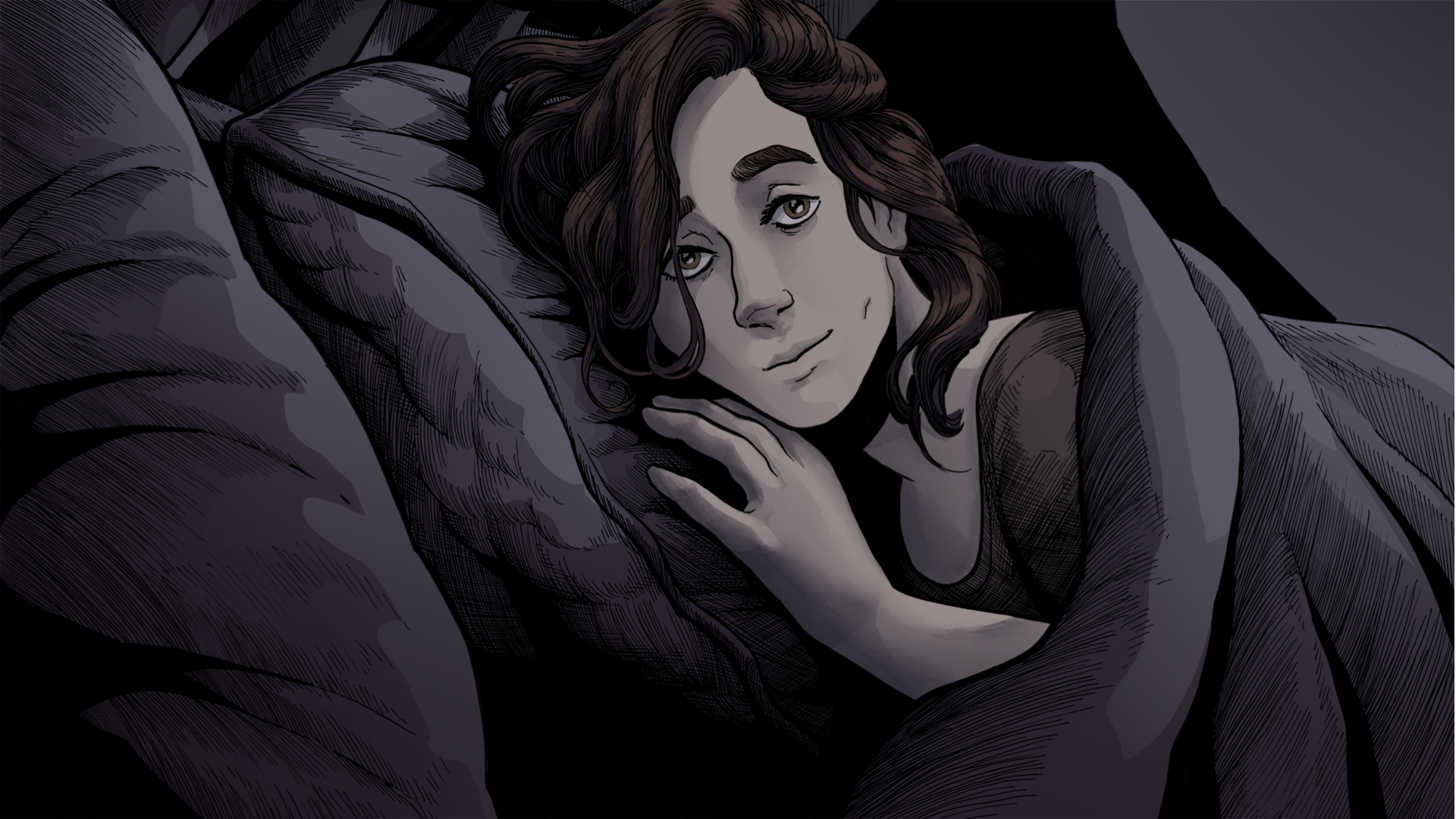 “All of my game design experience before working on this was DMing tabletop games,” explained Tony. “Something that was super important to both of us was setting up the game so that people would actually roleplay.”

Picking traits helps players to get out of their shells, encourages bold choices through special trait-exclusive dialogue options, and gives your avatar-less character some more, well, character.

It also ups the replay value of the game; according to the studio, the median player on Steam has played through the first two episodes three times. While the game’s mystery isn’t unsolvable for any particular trait, some traits do give the player access to bonus lore and hints.

For instance, the ‘Talk to Animals’ trait lets you speak with Dustin, the adorable feral opossum nesting in the dresser drawer of your decrepit guest room. If you select that trait during character creation, Dustin will helpfully inform you that there is, in fact, another person in the house, despite you and your cousin being — to your knowledge — the only occupants.

Your actions have consequences — both in and outside of the game

Another key mechanic in Scarlet Hollow is that you can’t just click all the dialogue options to scrape up every bit of information.

Depending on your choices, you could upset the NPC you’re talking to — and your list of potential dialogue options suddenly shrink mid-conversation.

Moreover, your relationships with each character are determined by a back-end points system hidden from the player (no + heart / – heart here, as Abby puts it).

The system is based on five axes: agreeable vs adversarial, openness vs closeness, boldness vs passiveness, insightful vs dullness, and reliable vs. unreliable.

“A lot of times, when dialogue changes or different paths open up, it’s due to not one of these axes, but a combination of them,” said Tony. “In Tabitha’s case, often if you’re agreeable but a little closed off, she extra hates you, because it seems very phoney. She’ll actually like you more if you’re adversarial towards her but also bold, because you’re calling her on her bullshit and that’s something that forces her to engage with you differently over time.” 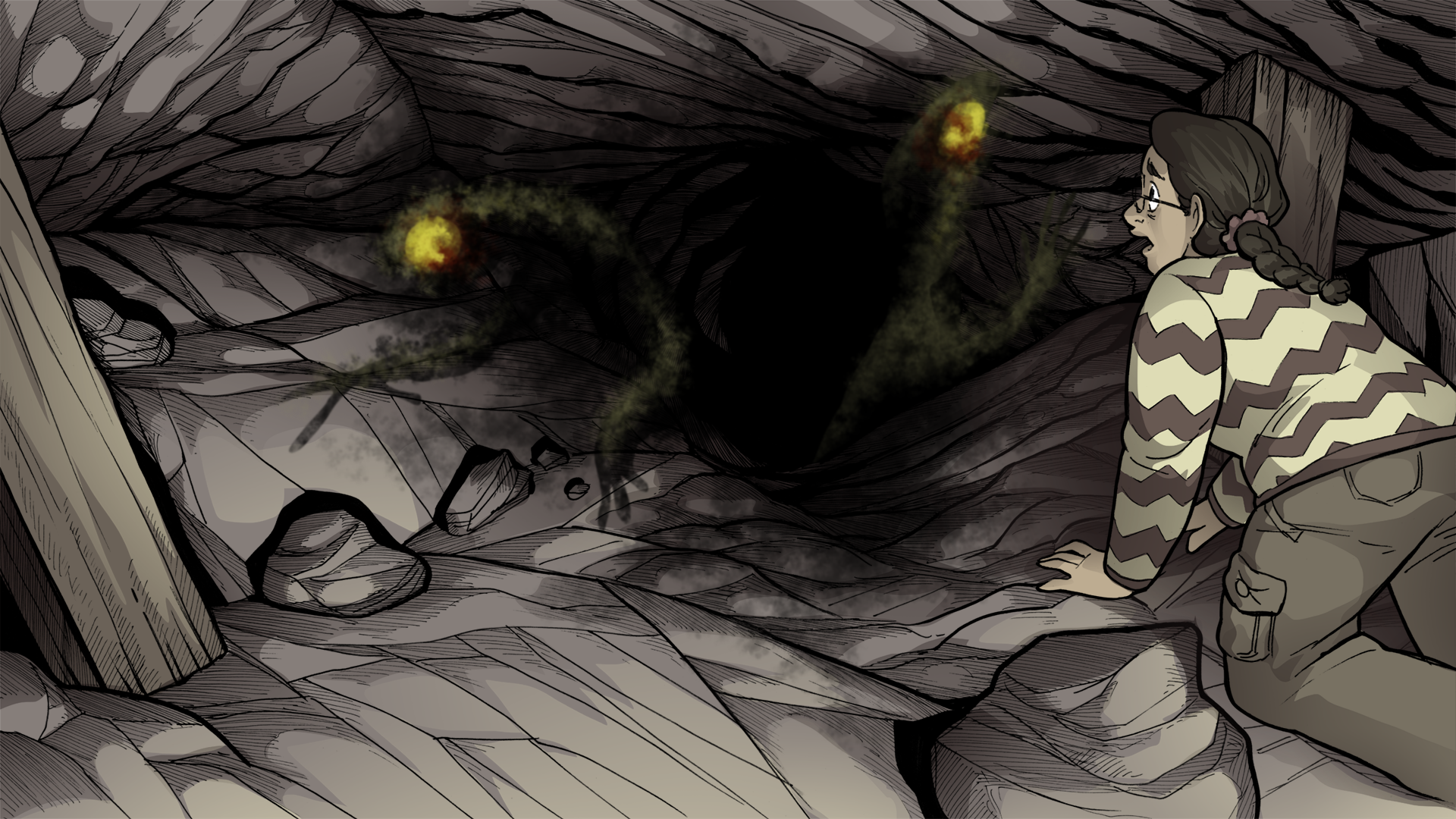 As a result, the way you play Scarlet Hollow really matters — and in more ways than one. Because the game is in early access, with levels being released episodically, the choices you make as a player could actually affect the final story.

The studio is keeping track of the choices players are making and uses this data to tweak the game via patches.

“We just put out a patch because for one of the main decisions in Episode 2, nearly everyone picked the same option,” Abby said. “It wasn’t as even a split as we would’ve liked, and it’s because people didn’t really understand the implications of what was happening in that moment. So we clarified that with the patch.”

According to Abby, it’s “an example of why being a two-person team is a little tricky, because there are some things we forget about or don’t factor in as much as we should.”

A nightmarish cocktail of mechanics, storytelling, and sound design

The double-punch combo of traits and hidden relationship points is really effective at keeping the player emotionally invested in their choices and consequences.

During my playthrough of Scarlet Hollow‘s first two episodes, I spent a lot of time frantically deliberating between dialogue options, torn between not wanting to burn bridges but also very keen on learning more about the horrifying shrouded figure leering at my bedroom window from the garden.

That feeling of being trapped permeates through the title and is introduced during the game’s “tutorial” section. In the opening scene, you’re riding a bus into town while a stranger with Big Serial Killer Energy™ talks your ear off.

Based on a real-life experience the duo had in Boston, this first conversation is deliberately designed both to teach you the game mechanics and establish an atmosphere where no matter what you do, you remain a captive audience at the mercy of another character.

“I think, hopefully, it works to break people out of the shell of ‘look at me, I’m an invincible video game main character, I can do whatever I want,'” said Tony. “It’s a horror game and we want people to feel some amount of powerlessness.”

When it comes to horror, nothing breaks the immersion like moments when the obvious solution is to just get out: leave the haunted house, don’t go into the obviously cursed cave, put down that Ouija board, etc. 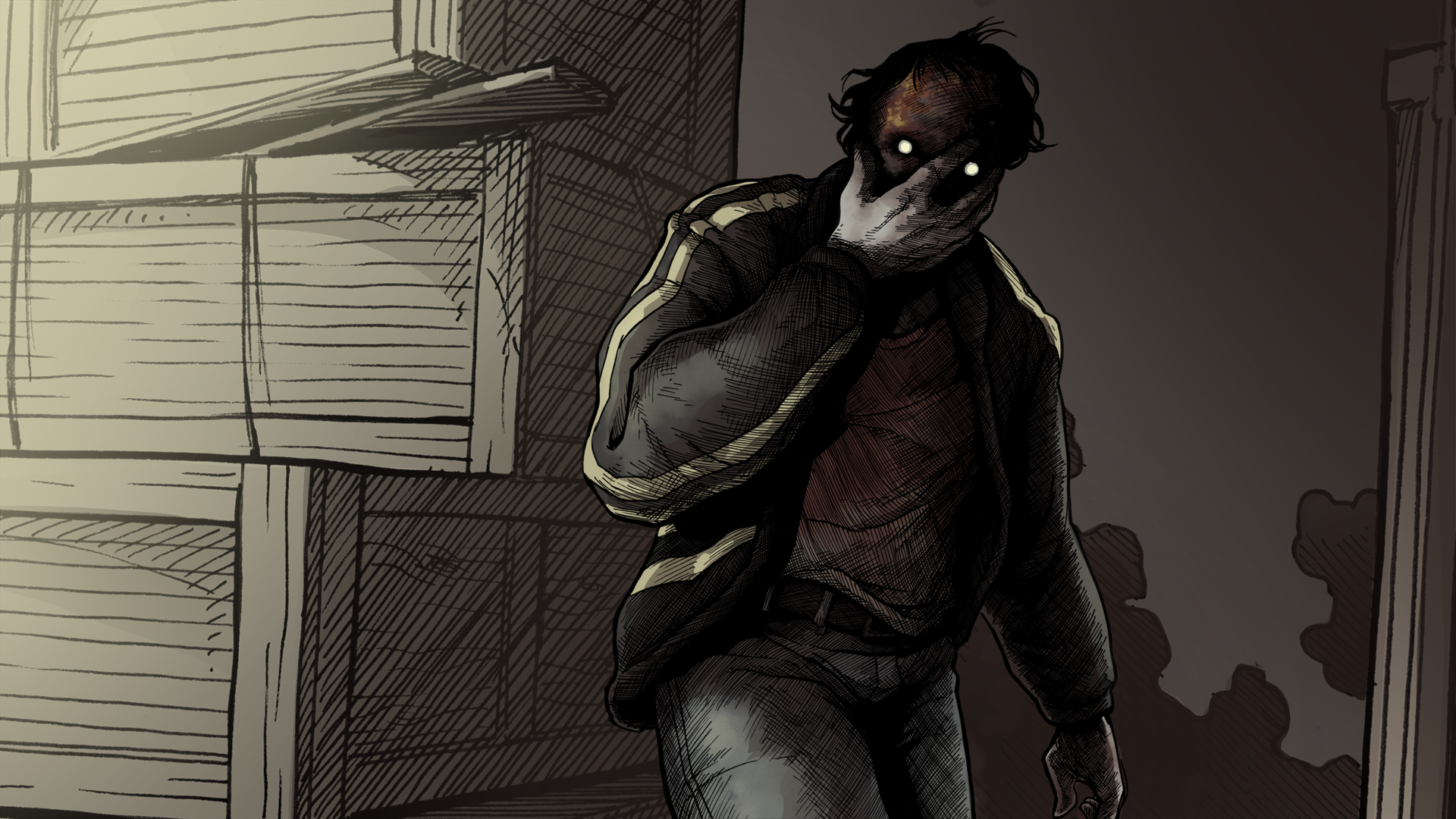 To address that, Scarlet Hollow takes the wickedly smart tactic of giving you the option to repeatedly, desperately ask other characters to help you flee — and of course, every NPC has a good, perfectly normal reason to stay. Even your character, as someone attending a funeral, has a pretty heavy social obligation keeping you from skipping town.

Another terrifying part of the game is the sound design, which is a particularly impressive feat given there’s no voiceover dialogue.

For that, Abby and Tony brought on composer Brandon Boone and sound designer Phil Michalski, who both work on the NoSleep Podcast, a horror fiction audio drama that abso-fucking-lutely lives up to its name.

For example, the end of Episode 1 finds your character in a dark forest full of layered, dissonant noises — and found me with a duvet pulled over my head and my laptop volume at 100 percent, trying to decode hidden clues from a chorus of guttural snarls and shrieks.

Perhaps the scariest part of the game is that it’s still unclear what the horror is. There are hints of a cult, ghosts of the past haunting your ancestral home, dark folklore and history surrounding the mine, rumours of a nearby nuclear incident, and — as previously mentioned — something TRULY AWFUL HAPPENING IN THE FOREST. Somehow this obscurity makes things worse, as you don’t even know what to be afraid of, only that you are, very much, afraid.

“You’re gonna have bad stuff happen to you, no matter what”

The first two episodes of the game are currently available to play on Steam via early access. Episode three is set to come out sometime in late January or early February of next year, and a new episode should be released roughly every six months after that — until episode seven which the studio expects will take at least a year to make.

“There’s going to essentially be three entirely different versions of episode seven depending on what choices you make leading up to that point, so we need extra time,” Tony explained.

“It’s going to be quite something,” said Abby. “I feel like people are really going to feel like their choices mattered.”

Having a bit of a wait time between episode drops also gives folks time to get hooked on the mystery.

“We want all of the endings in Scarlet Hollow to feel satisfying,” Abby shared. “There’s not going to be a ‘true good ending’ or a ‘true bad ending’ — well, there’s at least one that’s pretty bad, but it’s an interesting ending.”

“We didn’t want it to be a situation where you pick strong traits and get to coast until the end. Every episode is going to have a major decision, and each trait will have a chance to get out of the situation. No trait is going to be better or more successful at doing things than another. You’re gonna have bad stuff happen to you, no matter what.”