Thanks for the memories, Mr. Sakurai 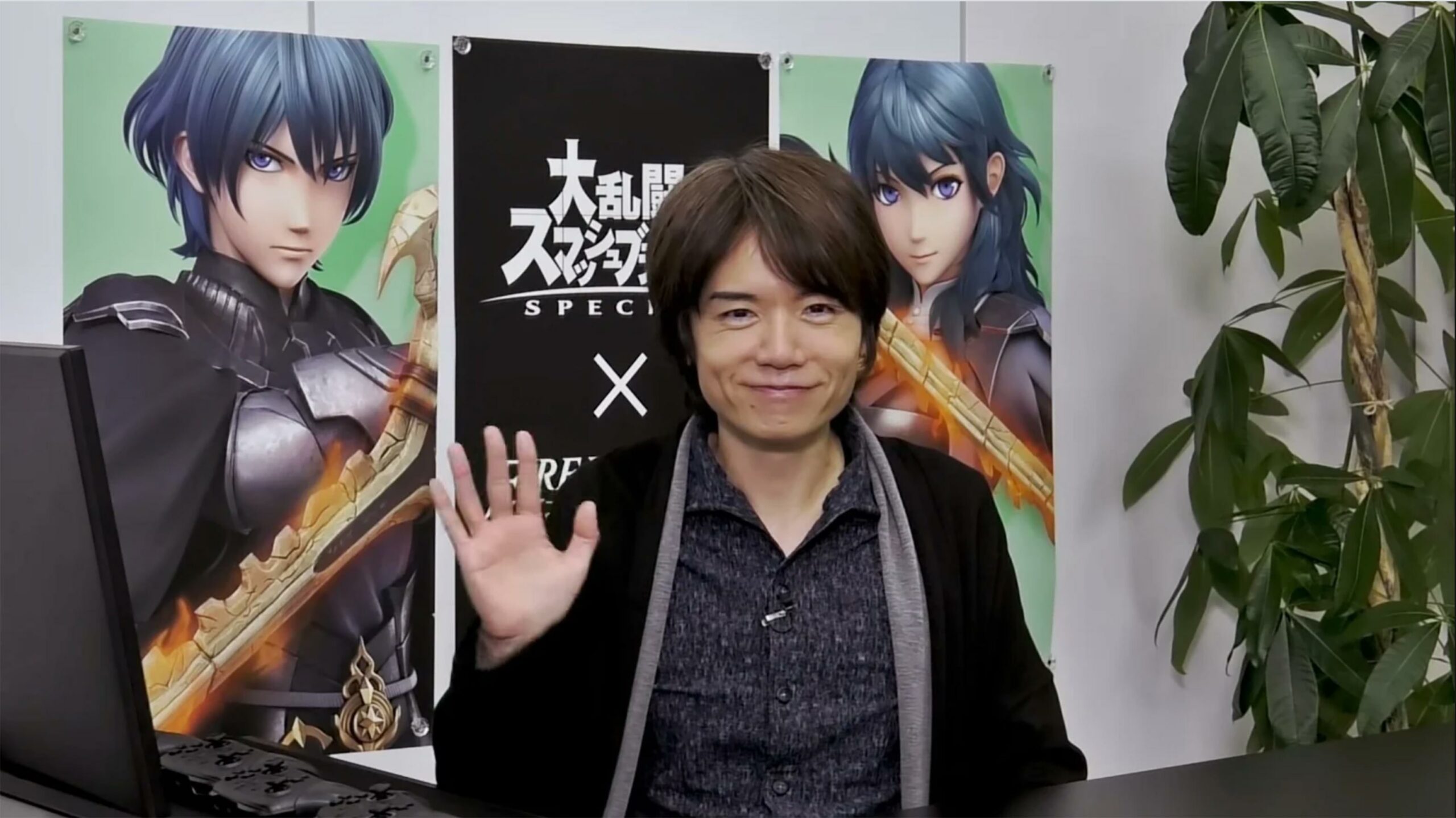 Not because the Direct itself was poor — on the contrary, I found it excellent and filled with all kinds of exciting announcements.  Rather, I’m getting surprisingly emotional over the news that we’ve all been waiting for — the reveal of the Super Smash Bros. Ultimate fighter, which is officially set to come in an October 5th “Mr. Sakurai Presents” stream. There, Ultimate director Masahiro Sakurai will show us the fighter’s moveset and release date, as well as the last batch of Mii Fighter costumes.

Tune-in on 10/5 at 7am PT for the reveal presentation of the final Super #SmashBrosUltimate DLC fighter with Director Masahiro Sakurai. The fighter’s release date and final Mii Fighter costumes will also be revealed!

And, after nearly three years of support for the game, that will be the final Ultimate presentation. Naturally, that’s brought on a lot of speculation. Just who will the last fighter be? People are deeply caught up in all of that, and that’s understandable. I can get that way, too. But I’m less interested in the identity of the final character and more about the significance behind it.

That’s because it’s not just going to mark an end for new content in Ultimate — it’s basically a swan song for Smash. as we know it. It’s expected that Ultimate will be Sakurai’s last Smash, and the game’s title clearly points to it being a culmination of everything that he and his teams have done with the series so far. It’s been an incredible nearly 23-year journey, and it’s one that’s seemingly concluding on October 5th.

“Of course, the fanbase has had its share of toxicity problems, but — and I’m speaking purely personally here — the cycle of ‘Smash hype’ has been a great source of joy.”

And that’s what hit me quite hard. I’ve been playing Smash for more than half my life, and during that time, it’s represented the quintessential social experience to me.

Whether it was Melee at my childhood best friend’s house, Brawl with my cousins during my summertime Florida trip, Smash 4 at game nights with my Future Shop and Best Buy coworkers or, most recently, Ultimate with my current group of friends, Smash has been a big part of my life. Hell, one of the last things I did with friends mere days before the start of the pandemic was a bunch of late-night Ultimate matches in our hotel room in Montreal, which gives the game even more of that “those were the good ol’ days” quality.

In many of these cases, I was playing with friends or family who I rarely got to see because they were in other cities or even countries. As an only child with a single mother, that time spent with others is particularly dear to me, and one of the biggest common threads connecting many of those memories is Smash. The easy-to-pick-up-and-play nature of the series meant that everyone from my friend who introduced me to Final Fantasy to my older non-gamer cousins could join in for some fun.

And that’s just what it’s meant to play the games. As the years have passed, the experience surrounding the series has been equally impactful. Over the past day, there’s been renewed discussion about the fact that trailers are, at the end of the day, just marketing. While that’s certainly true, it doesn’t mean that good things still can’t stem from them. Smash, by and large, is the perfect example of that for me. Of course, the fanbase has its fair share of toxicity and entitlement problems, but — and I’m speaking purely personally here — the cycle of “Smash hype” has been a great source of joy.

I distinctly remember freaking out in between classes at Ryerson University over the reveal that Cloud Strife — the hero of my favourite game of all time, Final Fantasy VII — was coming to Smash 4. My friends and I cheered at the mic drop “Everyone is here!” moment in Ultimate‘s E3 trailer, knowing that the characters, stages and music that we so dearly loved would carry over. And later character reveals, like Persona 5‘s Joker and, of course, FFVII‘s Sephiroth, only further caused us to lose our minds. Whether it was our own spit-takes, our favourite content creators livestreaming character reveals or reactions from Nintendo Store customers, the energy surrounding new Smash content is infectious. It’s the absolute communal experience — millions of people around the world sharing a raw, unadulterated joy, even for just a few minutes.

And those feelings of warmth extend to Sakurai himself. The legendary Japanese developer has always been well-respected for his work ethic, humility and humour, which has given Smash a wholly unique vibe. I can’t think of many other game creators who have millions of fans turning up to, ostensibly, just listen to them talk. That’s because Sakurai’s deep reverence for the industry at large — not just Nintendo games — is on full display during each stream.

The way he goes into the history of each series and shines a light on its creators is endearing — you can truly feel his enthusiasm in every word. And while I don’t even normally like to watch others play games, the bits where Sakurai demonstrates the new character with live commentary are just so pure and enjoyable. And make this all even more wholesome, Sakurai — while accepting an award for Ultimate being the best-selling fighting game of all time — has said that Ultimate was a particularly personal “mission” since it was the last one given to him by his late friend and former Nintendo CEO Satoru Iwata.

“…The franchise itself brings the entire industry together.”

And what Sakurai and his teams have achieved with Smash truly cannot be understated — it represents the absolute best of the video game industry. Yes, it’s exclusive to a Nintendo platform, but the way it tears down barriers like console warriors to celebrate the medium as a whole is nothing short of spectacular. In my original 2018 review of Ultimate, I called the game “a fantastic love letter to all of gaming,” and that’s only become truer ever since. To boast a roster with such Nintendo icons as Mario, Link, Pikachu and Donkey Kong would be good enough, but Smash has gone on to include so many beloved characters across all of gaming.

In fact, even characters owned and/or associated with other platforms, like Final Fantasy‘s Cloud and Metal Gear‘s Snake (mostly known for their PlayStation games), and Microsoft-owned Steve (Minecraft) and Banjo-Kazooie have shown up to Smash. And if that wasn’t enough, Smash shows some love to many more franchises in ways beyond its roster, be it Mii Fighter outfits for Fallout‘s Vault Boy, Devil May Cry‘s Dante and Canadian-made Cuphead, music from the likes of Wii Sports and The Wonderful 101 or Assist Trophies based on Rayman, Bomberman or Shovel Knight.

That’s to say nothing of other talented creators who have collaborated on the series, particularly with new pieces or remixes from such composers as Nobuo Uematsu (Final Fantasy), Yoko Shimomura (Kingdom Hearts), Keiichi Okabe (Nier), Yuzo Koshiro (Streets of Rage), Motoi Sakuraba (Dark Souls) and Toby Fox (Undertale). They didn’t have to go that extra mile to enlist such legendary artists (often just for DLCs), but the fact that they did just makes it all feel even more special. In an industry that often nickels and dimes consumers with monetization, Smash‘s add-on content feels meaningful and lovingly put together.

Think of it this way — new Smash reveals might bring the fans together, but the franchise itself brings the entire industry together. And who knows what kind of other crazy partnerships we’ll see on October 5th. I couldn’t begin to guess who the final character will be, although I do hope it’s someone who would really break the internet, like Halo‘s Master Chief or Kingdom Hearts‘ Sora. But ultimately, it doesn’t really matter who fills that last slot. We’re going to be at nearly 100 characters when all is said and done — that’s nothing short of mindblowing. And beyond that, Smash Bros. has given gamers — particularly me — so much enjoyment over the years.

“For now, though, I’m going to celebrate the work of Sakurai and his teams — not just Ultimate, but the Smash series as a whole….”

Now, Smash isn’t suddenly about to end, of course. Ultimate will obviously remain playable for years to come, while the series is too big of a cash cow for Nintendo to ever let it completely rest. But, as Sakurai says, there’s no way a future game will be this big. How could it be? A game of this calibre, of this scope, with this many companies and their properties featured — it’s unprecedented.

We’ll surely never get a Smash like this again. And while that admittedly gets me a little misty-eyed, it’s also okay. A fresh, rebooted take on the series will be good, especially if it leaves Sakurai open to move on to something new and exciting. His last non-Smash game was 2012’s splendid Kid Icarus Uprising, and, lest it be forgotten, he’s the creator of a little unknown character named Kirby. There’s so much potential for other creative efforts before he inevitably retires.

For now, though, I’m going to celebrate the work of Sakurai and his teams — not just Ultimate, but the Smash series as a whole. Come what may on October 5th, it’s been the ride of a lifetime, and I’m just happy to have been a part of it.