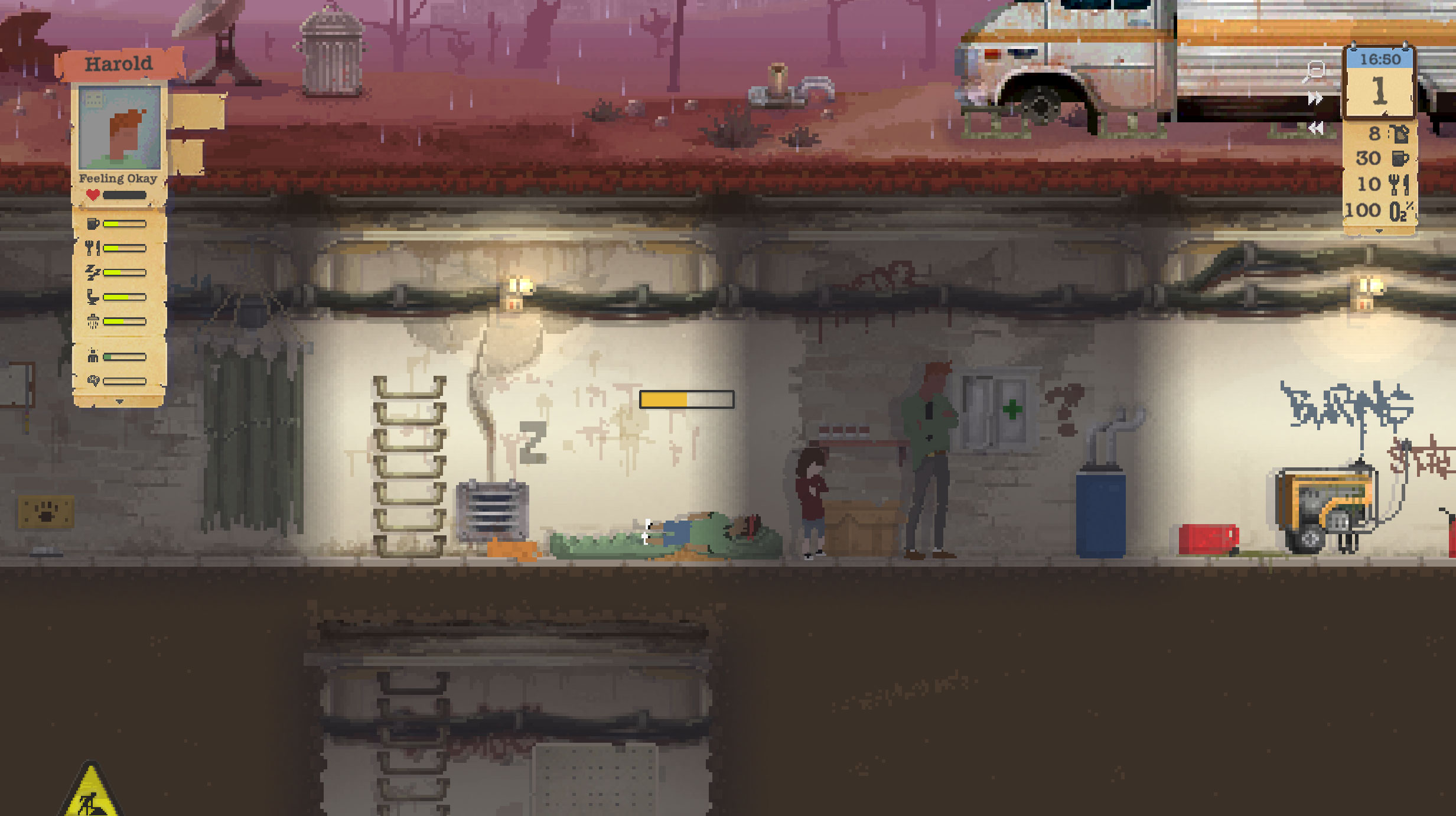 Team17 Digital’s Sheltered is a post-apocalyptic strategy survival game that starts out slow and easy, but ramps up the intensity when food supply declines and sudden infections, radiation poisoning and intruders make it difficult to live.

Sheltered, which was released in March 2016, is currently free to download on Epic Games Store until September 16th, alongside Nioh: The Complete Edition. I tried out Sheltered with no major expectations going in (I’m typically not a big survival game fan) but it’s safe to say it pleased and frustrated me equally. 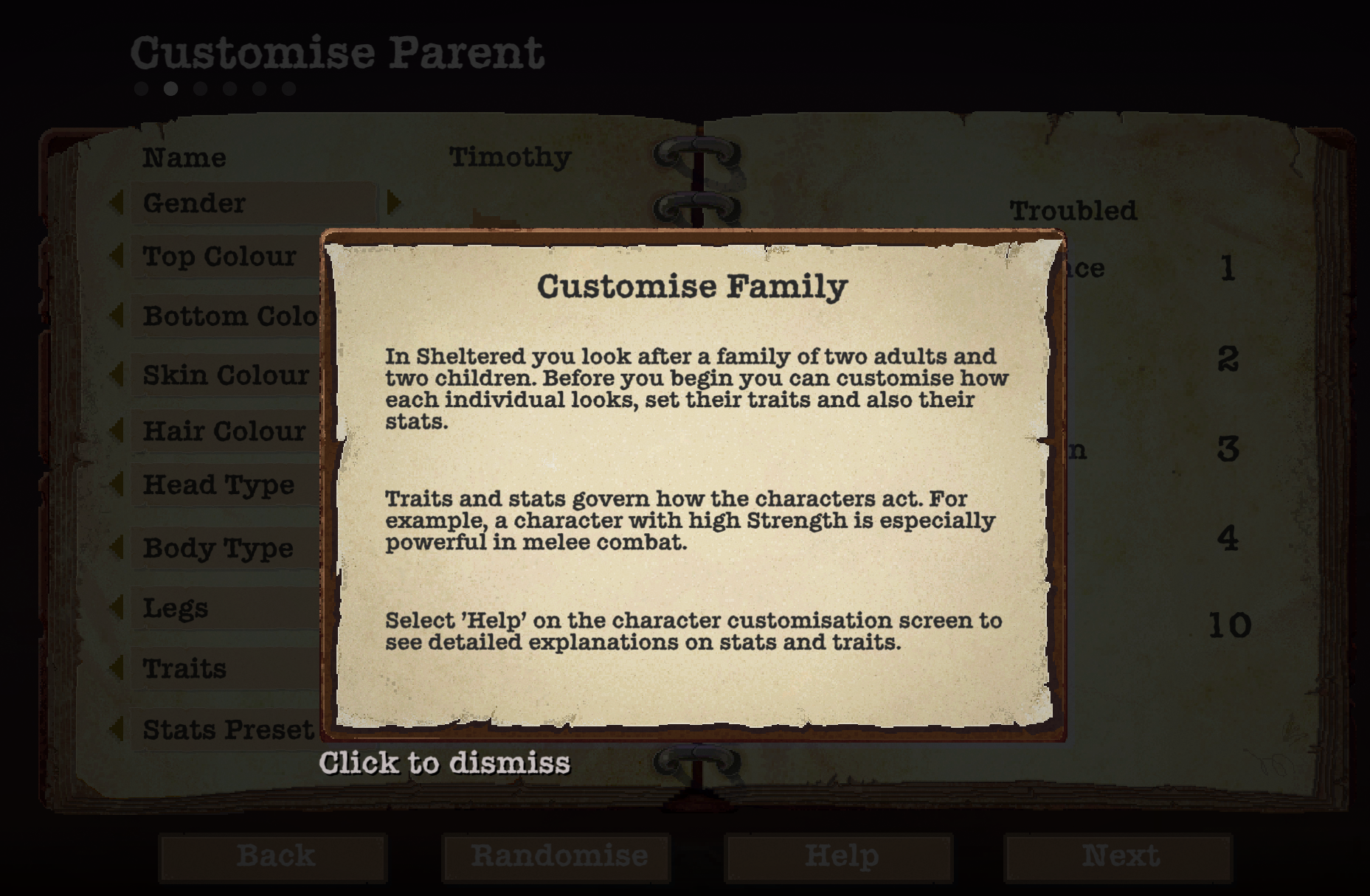 The first task is for you to create your family of five, including a pet (which can be a dog, cat, fish, horse or a snake) with each having its own pros and cons. You also get to select your family characters’ names, gender, skin tone and more.

More importantly, you’re able to choose from a variety of traits and stats that play a major role in your character’s efficiency. For example, the ‘Hands-on’ trait can help you craft faster, whereas the ‘Proactive’ trait enables your character to move around faster. 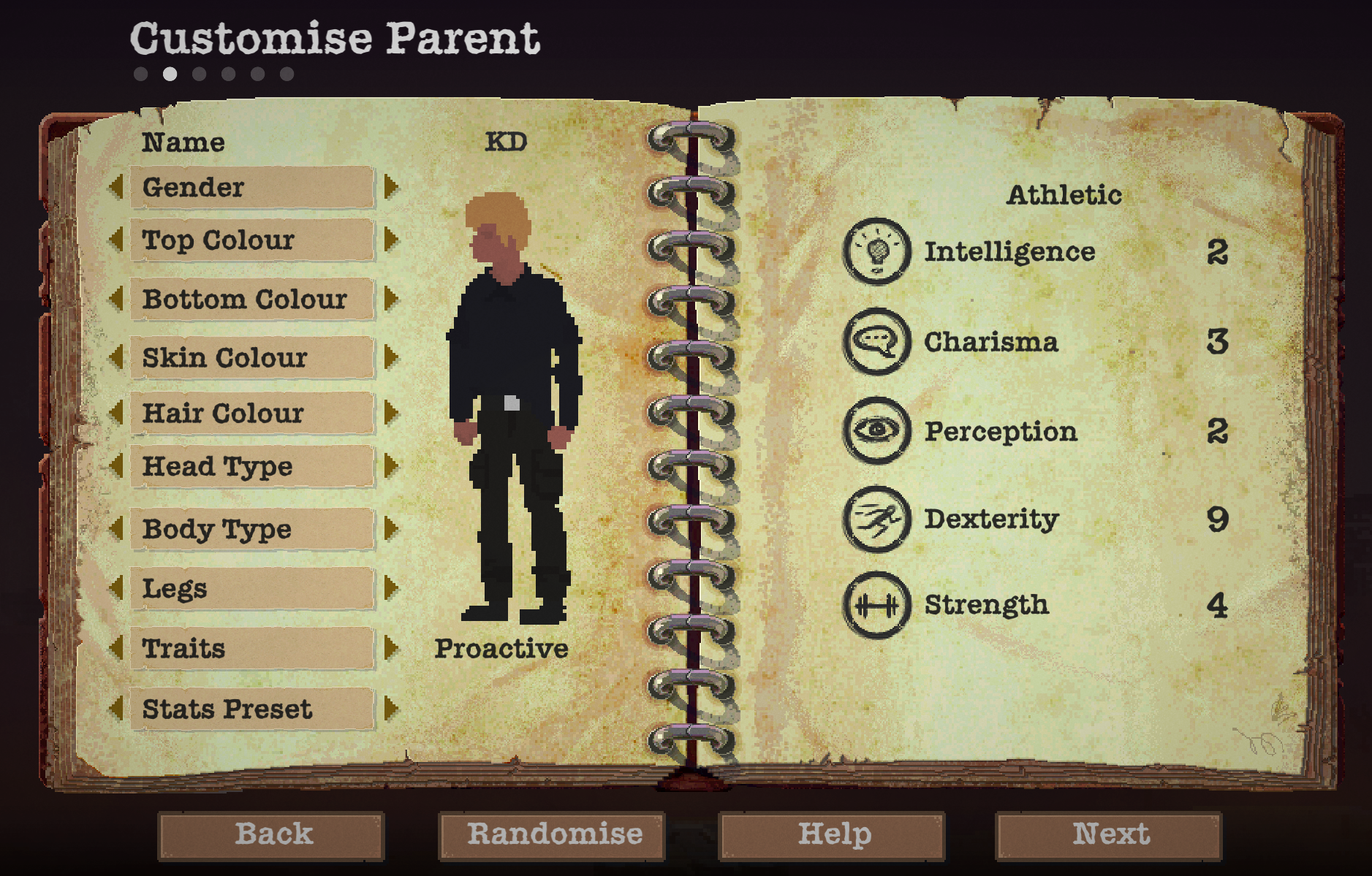 Once you create your family, it’s game on. You start the survival journey in your underground shelter, and the game doesn’t provide you with any knowledge about the reason behind the post-apocalyptic setup. However, judging that radiation poisoning is a thing when you leave the shelter, it’s safe to assume that nuclear warfare may have been involved. But in this game, the past is not something you need to worry about — it’s the dreadful future full of uncertainties that will keep you on the edge.

A short tutorial about Sheltered’s mechanics follows, which hardly explains what you need to do besides the very basic fundamentals of the game, including crafting, gathering resources and water and food requirements. Further, it outlines how going to the surface without a hazmat suit can cause radiation poisoning, how stress and trauma levels play a major part in your family’s wellbeing and that radio transmissions should always be answered.

The tutorial ends and you’re left to fend for yourself and your family.

My first few tries at Sheltered resulted in the eventual doom of most of my in-game family members as we used our resources hastily with no regard for the kids. I sent them out into the radiation to build a horse barn and fix our water filter with no hazmat suits. In short, I initially found the game to be boring and repetitive. 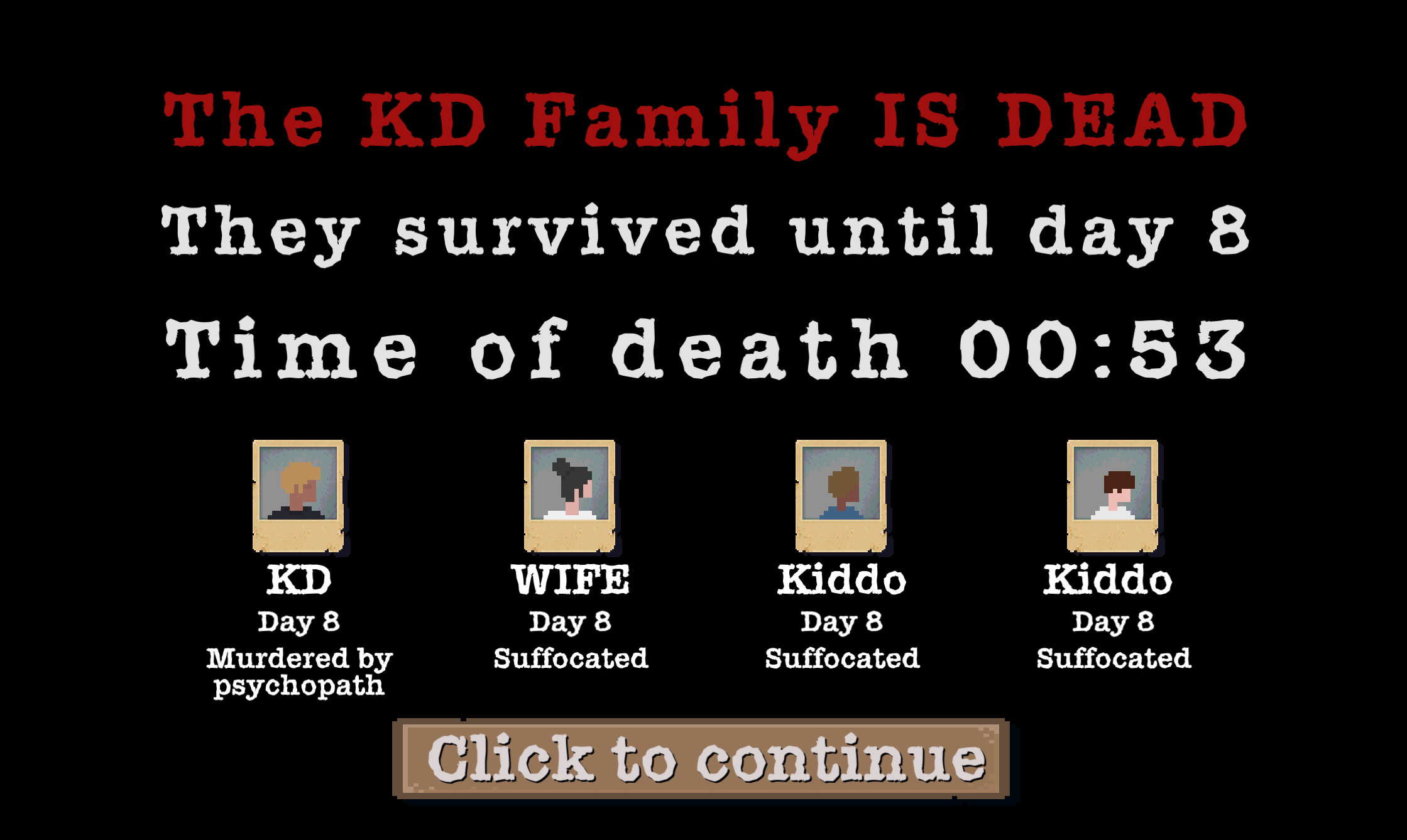 However, over time I got the hang of Sheltered and what I needed to do to survive (spoiler alert: my in-game family still doesn’t survive, and no, Vin Diesel was nowhere to be seen).

To carry out everyday tasks, upgrades and craft new items, you require resources. The best way to find resources is to send your family members out on expeditions, which costs water. You obtain water either from rain or from trades.

You can select two members from your family to go on expeditions with, and make sure you equip them with a gas mask. Otherwise, they’ll come back with radiation poisoning and you’ll have to waste a bunch of meds and resources to get them back to health. 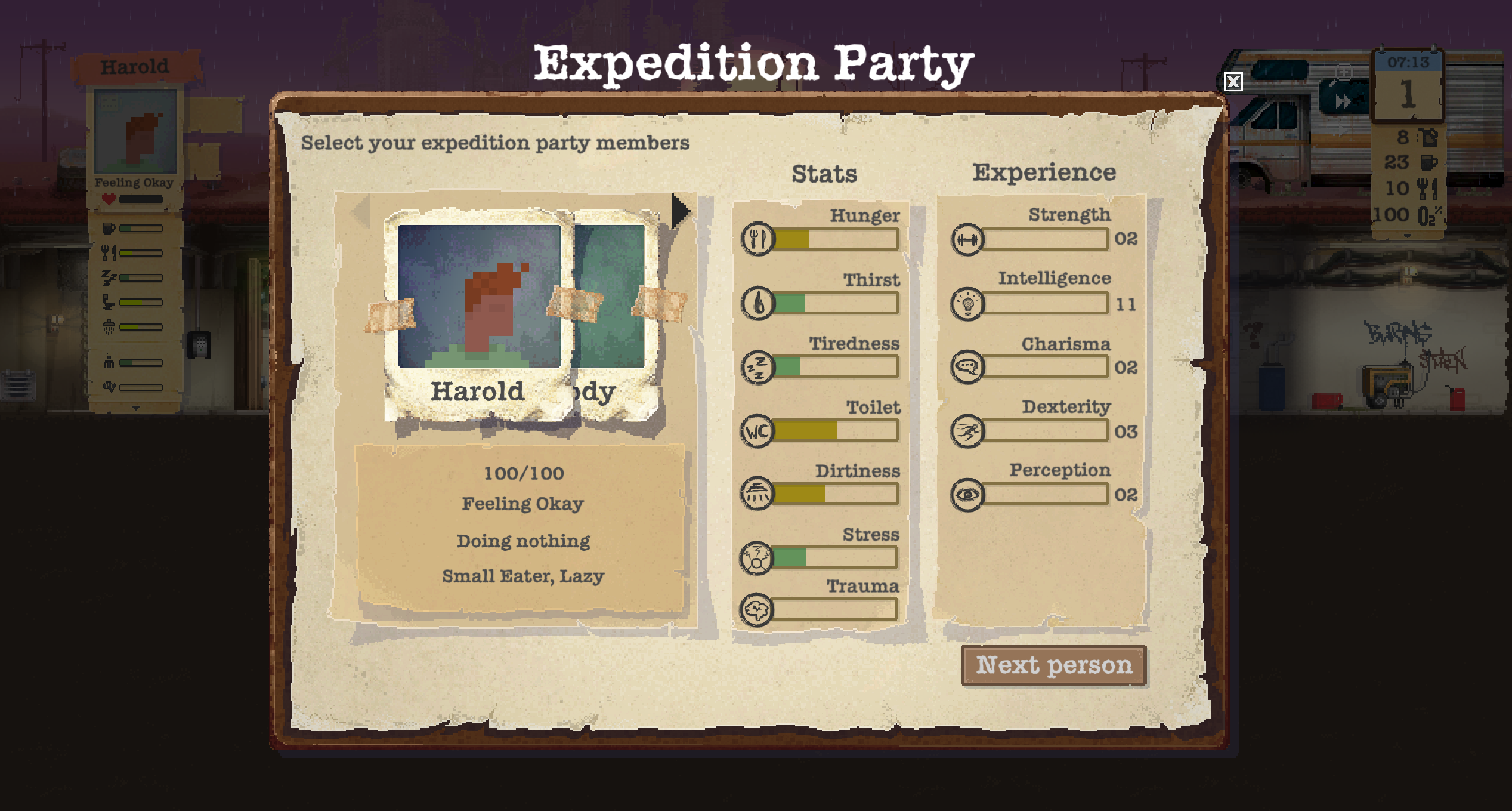 What resources they obtain depends on where you send them. Expeditions to a gas station will earn you fuel, whereas going to a nearby church or home will earn you water, ropes, nails, etc.

It’s also worth noting that your explorers can sometimes encounter NPCs on their way which can be violent, confused or friendly. Subduing them and taking away all their stuff usually turns out well for you and your family. 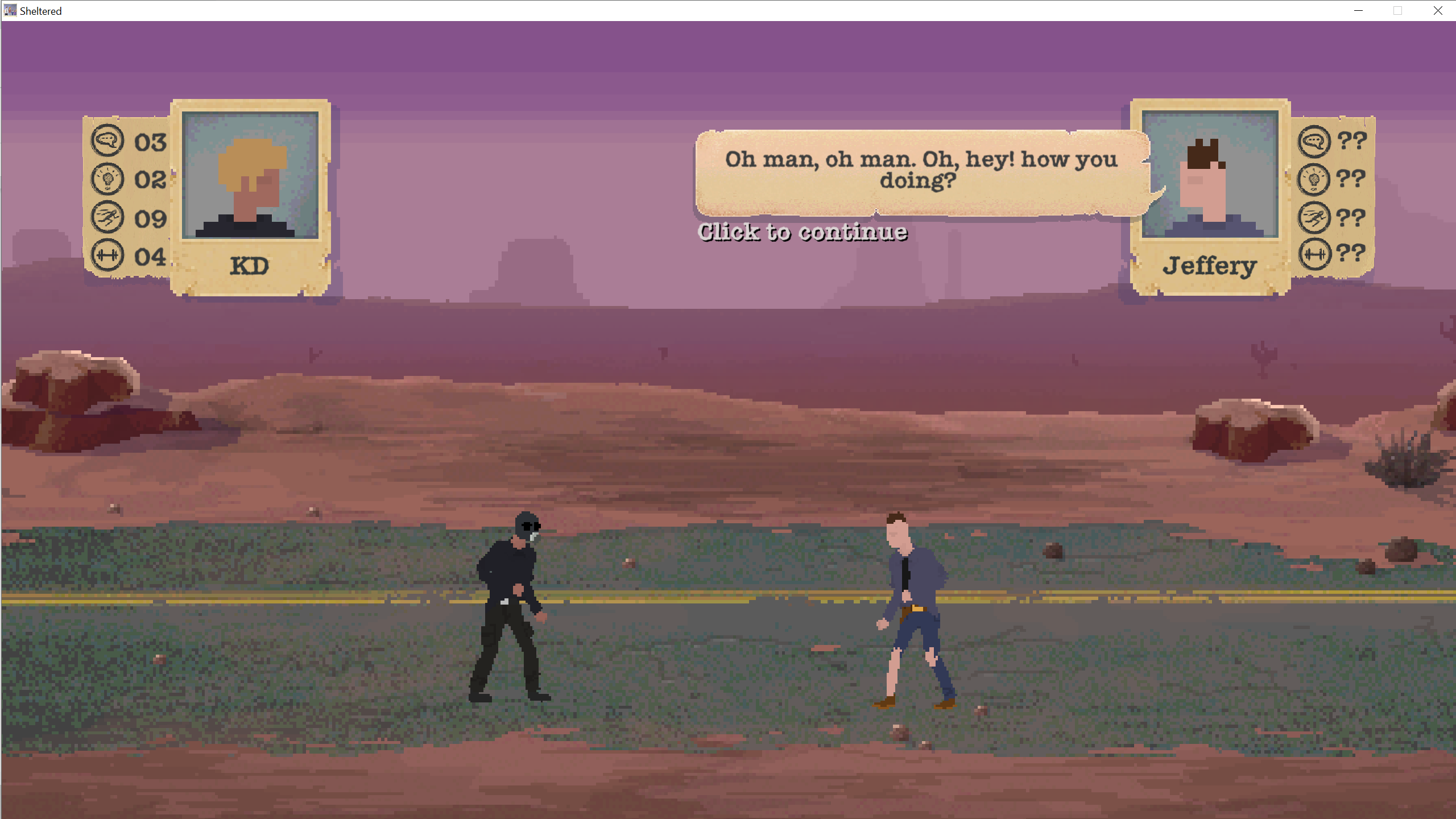 While two members are gone on the expedition, other members of the family can clean the shelter, upgrade the water and oxygen filters, dig out additional rooms, sleep, shower, puke (yep, they puke, and a lot), bury dead bodies, etc.

In essence, Sheltered requires you to plan out every move and micromanage your resources like your life depends on it (it does). 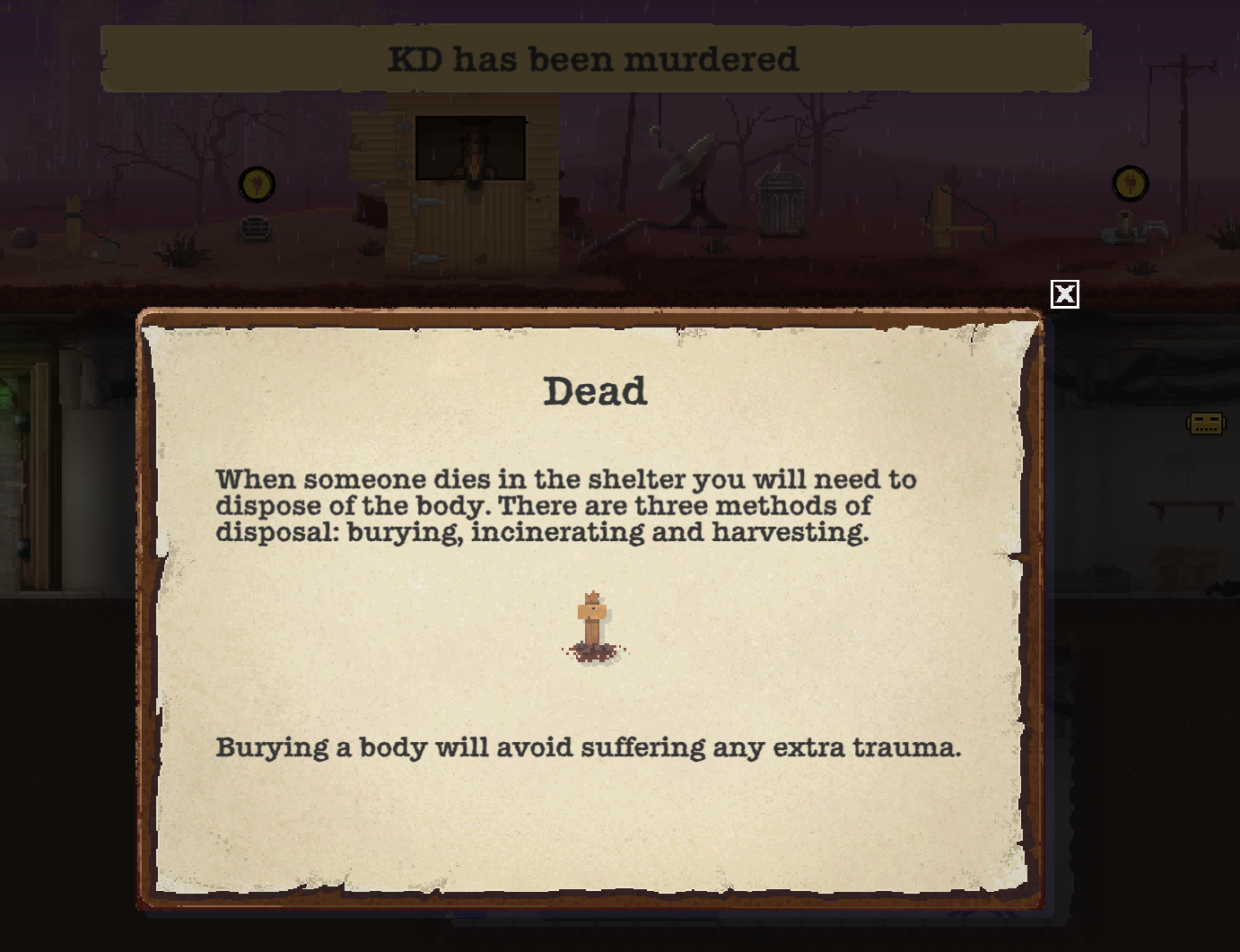 The game’s core mechanics involve repetitive moves that might feel boring and tough at first, but as you get the hang of your duties, and come back from an expedition bearing resources your pixelated family needs to survive, you’ll feel a sense of accomplishment and joy, and this is coming from someone who doesn’t enjoy playing such survival games.

Sheltered is currently free to download on Epic Games Store until September 16th.