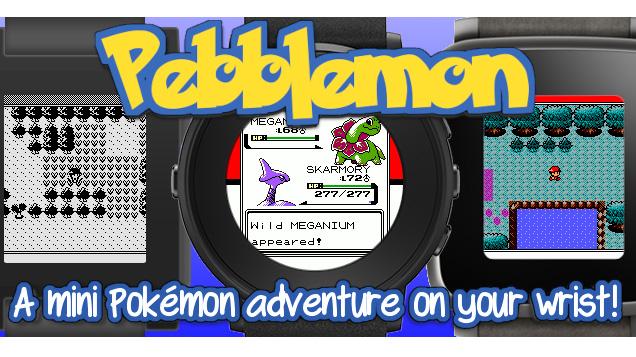 Despite the fact that Pebble was purchased by Fitbit for $23 million way back in 2017, effectively killing the upstart smartwatch maker, there are still dedicated groups of enthusiasts keeping the dream alive.

As a long-time fan of Pebble — I still count the Pebble Time Round as my favourite smartwatch — every time a new app or service appears for the wearable, I jump at the opportunity to check it out.

This is where Pebblemon, a “Pebble-sized” take on the Pokémon franchise, comes in. Posted to Reddit’s surprisingly still active Pebble subreddit, Pebblemon is an impressive take on the iconic Pocket Monster collecting franchise’s Gold and Silver era.

The game even caught the attention of Pebble founder Eric Migicovsky, seen in the tweet below:

5 years on and devs like linksky are STILL building new game engines and beautiful games like Pebblemon for @Pebble. Incredible! https://t.co/gNJhJZb6qT pic.twitter.com/BU7FxSDwlm

According to ‘LinkSky,’ the game’s developer, Pebblemon features several familiar Johto region locations, 251 Pokémon and the ability to “level up and unlock 22 different sprites.” With this in mind, Pebblemon seems to be more of a bite-sized slice of the Game Boy Colour’s Pokémon, rather than a full port of the game.

In the post, LinkSky says that they made “a graphics library that replicates the graphics on the Game Boy Color, and created Pebblemon to show it off!” The game’s source code is also available to download.

For those interested, the game is available through Rebble, a fan-run platform that has kept the Pebble dream alive for the last few years. It’s worth noting that Pebblemon is only able to run on the Pebble Time, Pebble 2 and Pebble Time Round and not the first-generation Pebble.

Hopefully, Nintendo and The Pokémon Company don’t catch wind of this very cool project because, given their history of litigation, Pebblemon could disappear swiftly.