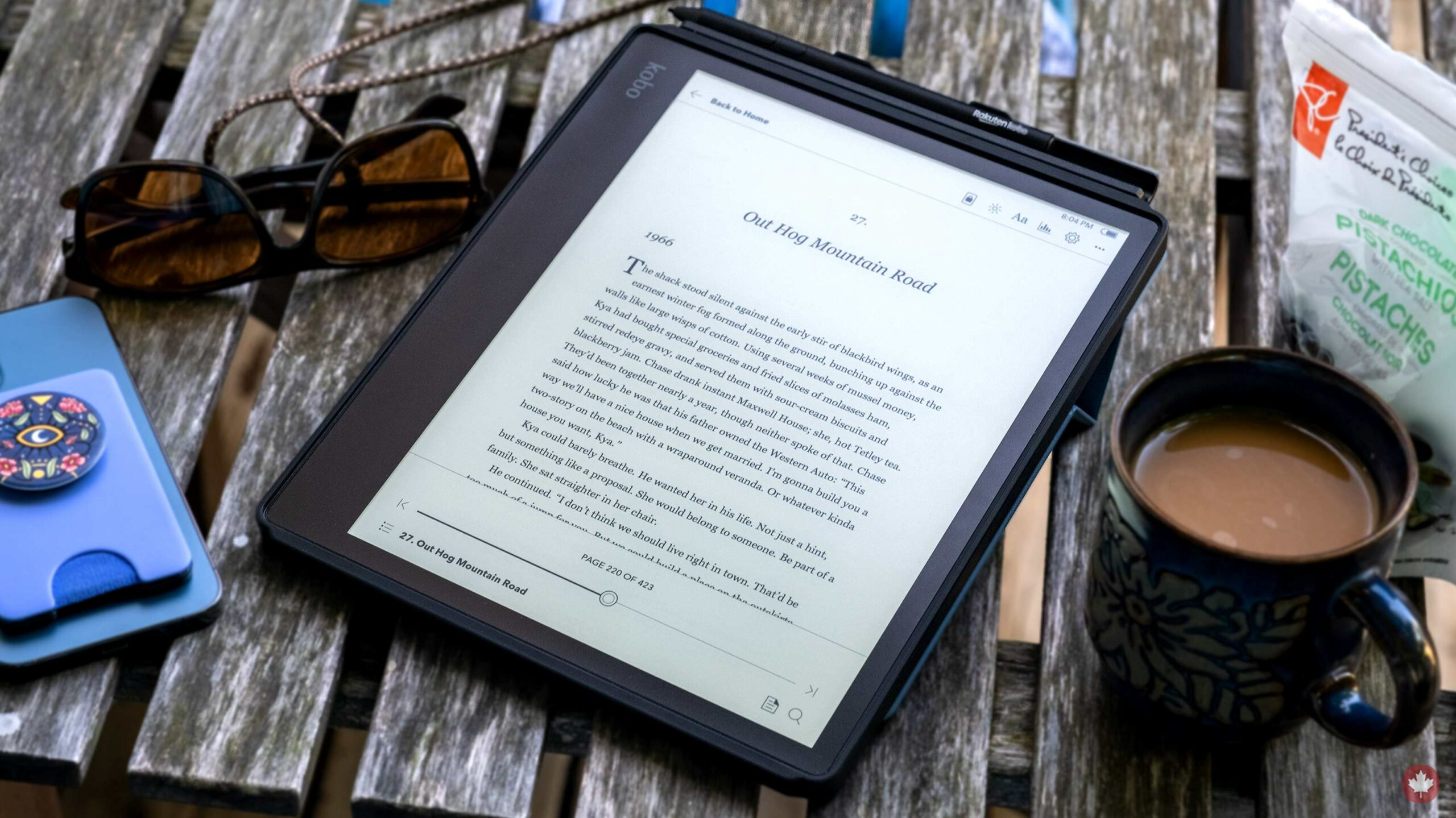 The Kobo Elipsa is a new 10.3-inch screen e-reader from Rakuten Kobo that comes with a stylus, allowing you to mark up books or take notes. While this takes what an e-reader can do to the next level, but it also includes a few significant drawbacks.

The device and its stylus are packaged with a lovely leather case, but altogether, the Elipsa costs $499 in Canada, putting it in the same price territory as the iPad, a device it just can’t compete with.

It’s not that the Elpisa is a lousy product. On the contrary, it’s nice to use and works incredibly well for some niche use cases, but the amount of features it provides for a premium tablet price are a little lacking. 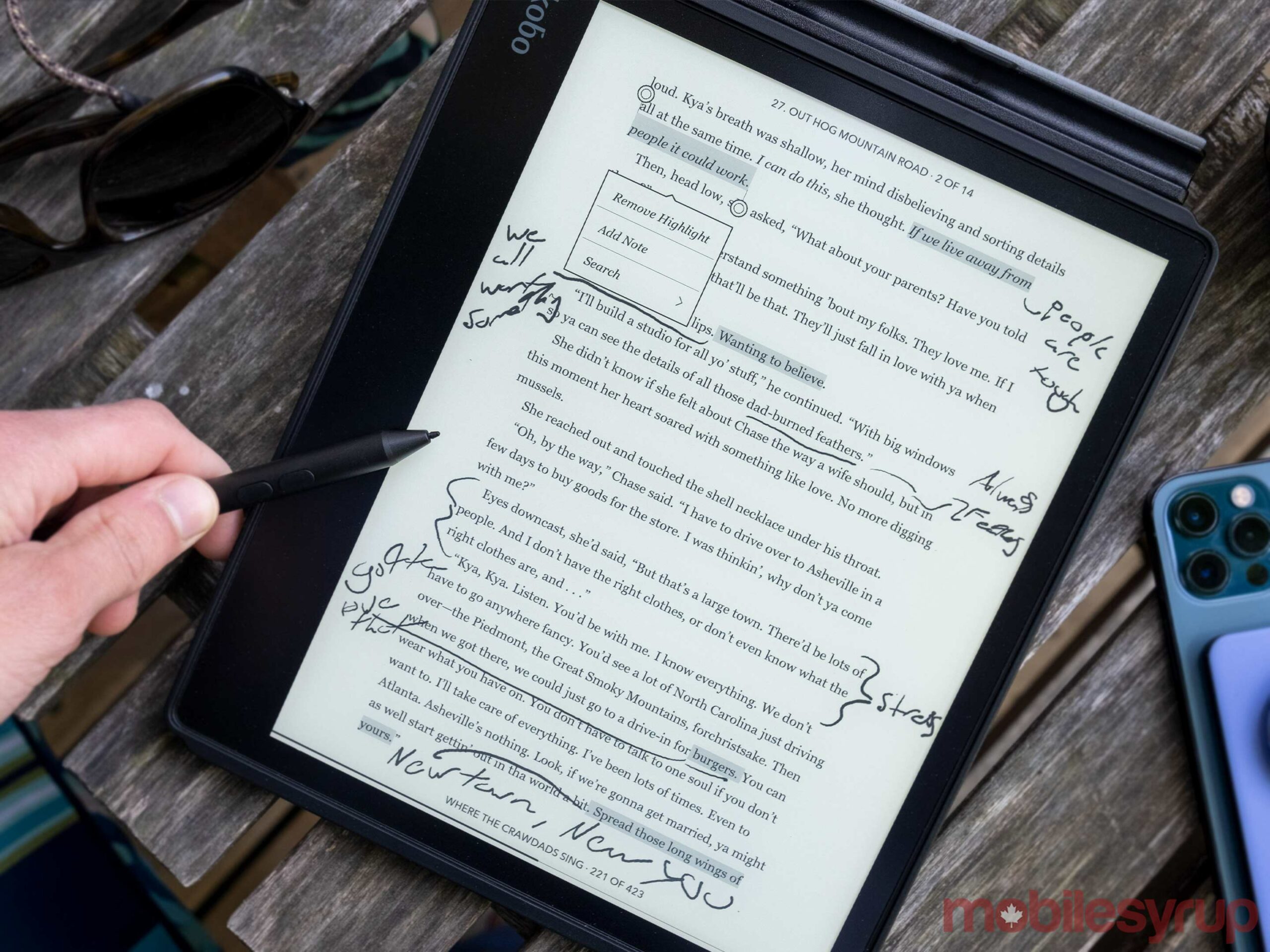 With that in mind, if you’re willing to spend the money, there’s a lot to love about the Elipsa. Even if its large size makes it a bit heavy (389g), the hardware is excellent and overall, it feels like a solid device.

The 1404 x 1872 pixel resolution display screen is sharp too, but for some reason, Kobo got rid of the hue shifting backlight from the Kobo Libra H20. Instead of being able to use a yellow backlight at night, the Elipsa just dims. It does get dark enough to read at night without being distracting, but it would have been nice to have the option at this price point.

The specs inside the Elipsa are also solid. There’s a gigabyte of RAM this time around, so tasks like typing and moving between pages is slightly smoother than with cheaper e-readers like the Kobo Nia. I still wouldn’t call it a perfect experience, but it’s far less rage-inducing than before. 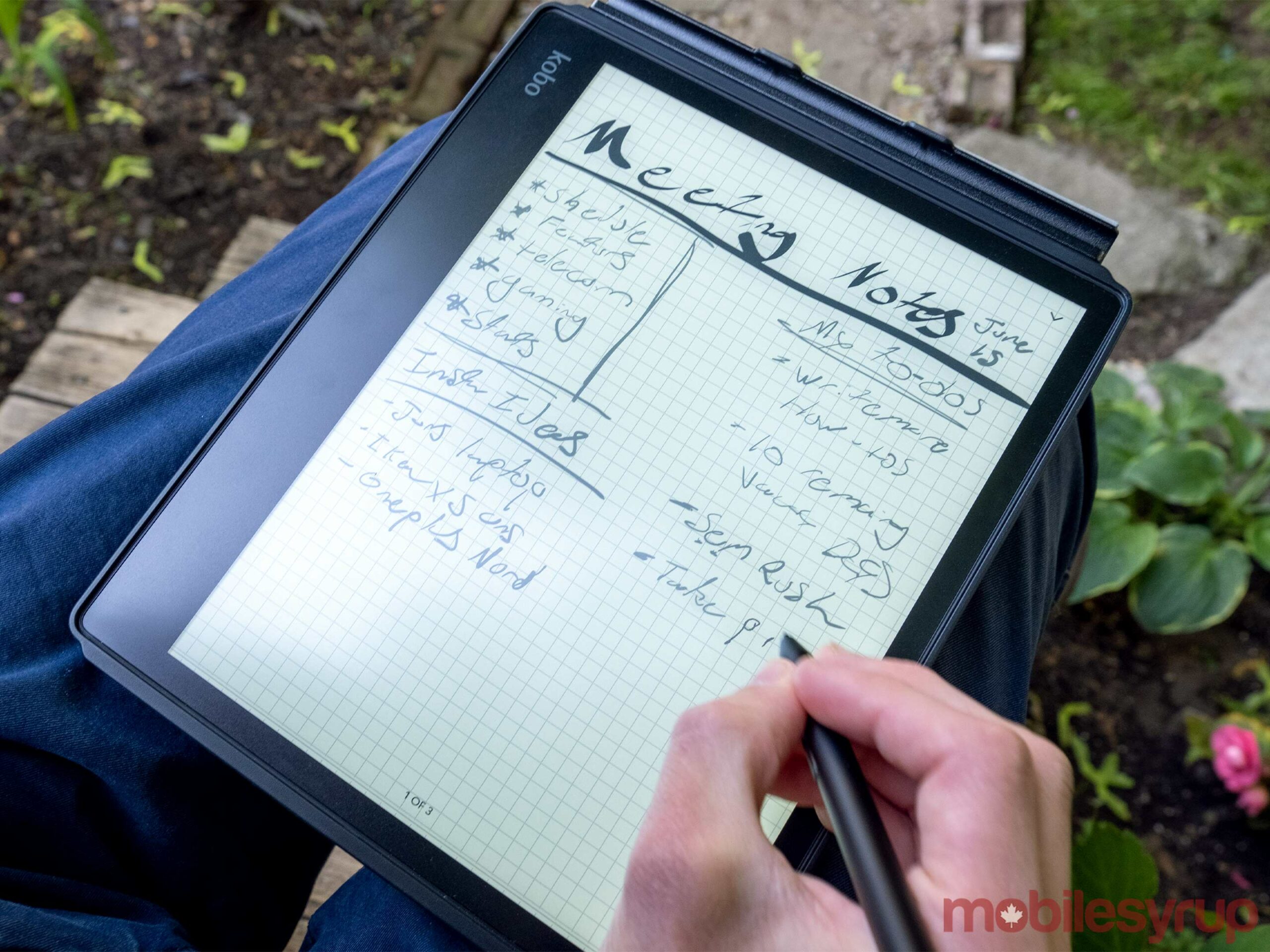 The real meat of this device is its note-taking abilities, which perform reasonably well. The stylus feels reactive, and as you drag it across the screen, the feeling is reminiscent of scribbling with a ballpoint pen on paper.

While this is perfect for note-taking, it’s not the most elegant solution for drawing since there is a bit of input lag. There’s less than you’d expect from a device that needs to refresh parts of its screen every time you type, but it’s not even close to the standard of a Wacom tablet or Apple’s iPad.

Still, the feeling of using the pen is nice and the actual stylus’ hardware feels good too. The pen features two buttons on it, including one for erasing content and another for activating the highlighter function. 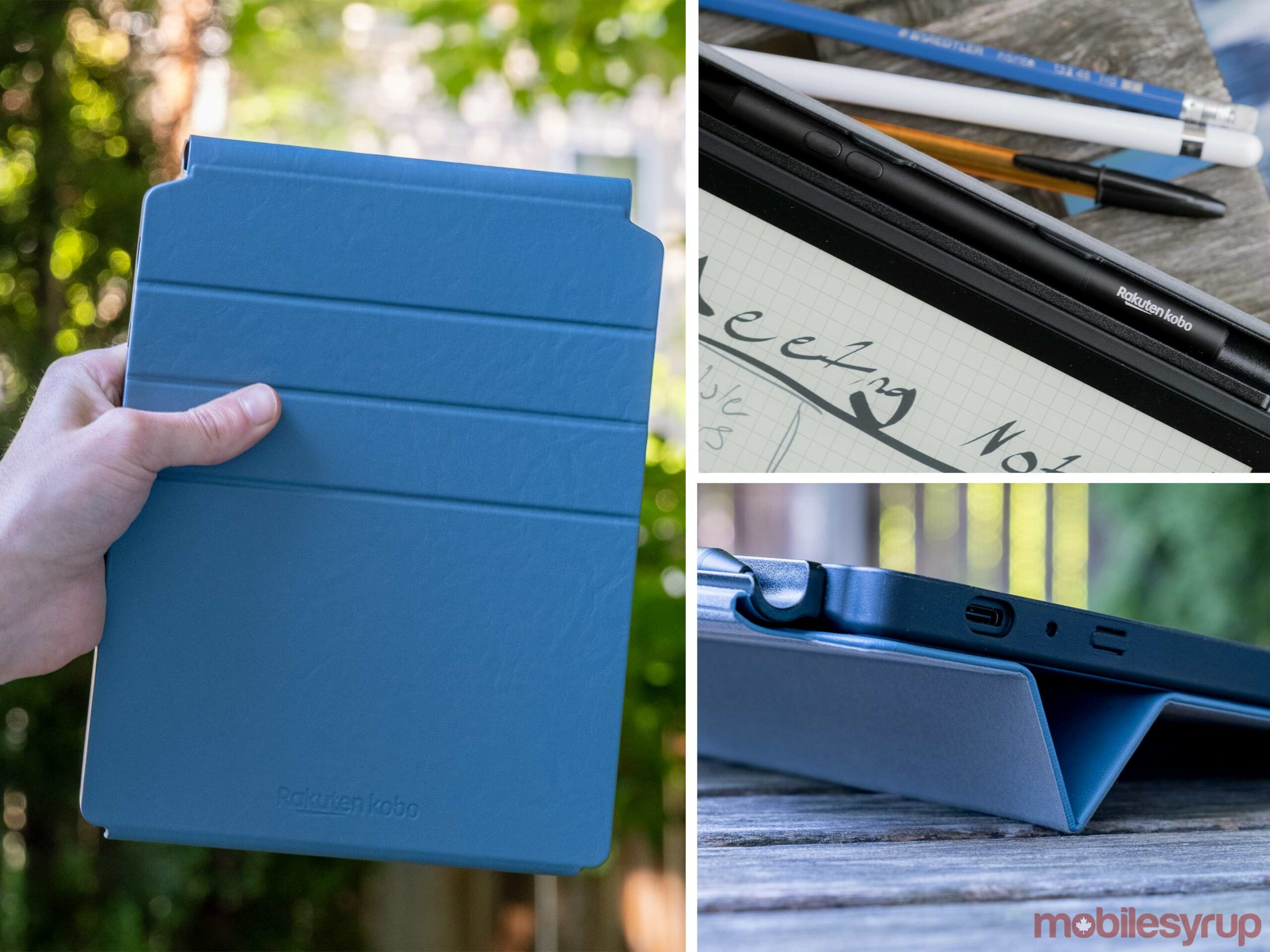 You can draw in either a dedicated notes app or in the margins of books. Kobo is even smart enough to save all these margin notes with your highlights and typed notes, so they’re really easy to find later. However, unless you want to add little illustrations or side notes, this functionality was already possible by using typed notes.

The included Sleep Cover is also pleasant to use and the leather front feels great. Plus, it even folds under the tablet to prop it up into a perfect little writing stand. My only gripe with this case is that it’s bulky and since the e-reader/tablet is huge already, it adds more heft than I’d like to the Elipsa. I would have preferred something more reminiscent of an iPad Smart Cover.

Other useful specs and features 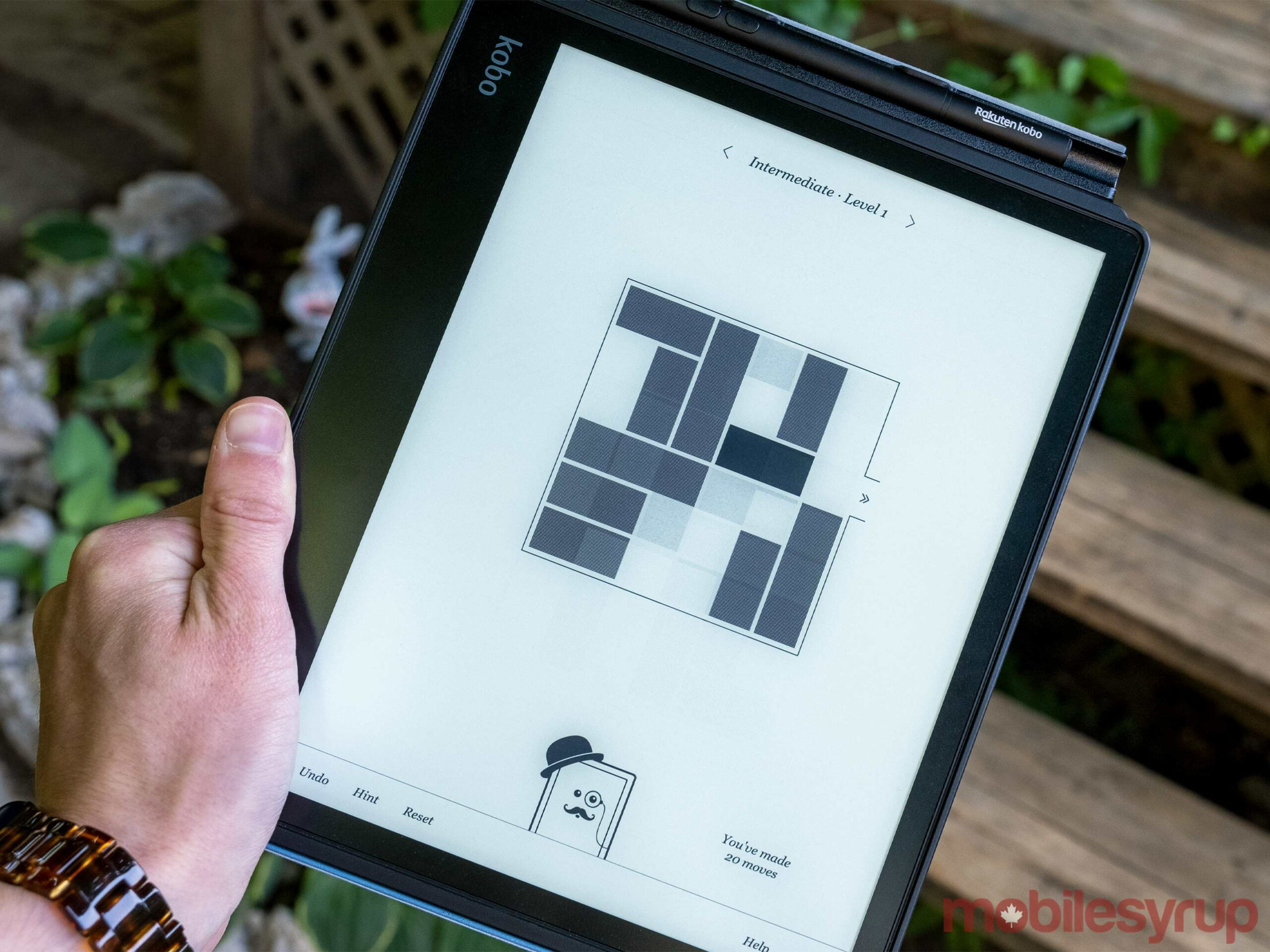 The Elipsa features 32GB of onboard storage, so it should be able to hold lots of books and PDFs. The cool thing about the fact that you can load PDFs onto it means you can sign and mark up some documents too. This doesn’t work with all PDFs though and files with DRM won’t work on the Kobo.

This is also the first Kobo to charge via USB-C, a nice touch that allowed me to take one less charger when I went to visit my parents a few weeks ago. Having said that, like most e-readers, the Elipsa has great battery life that lasts for weeks, so I didn’t even need to charge it. 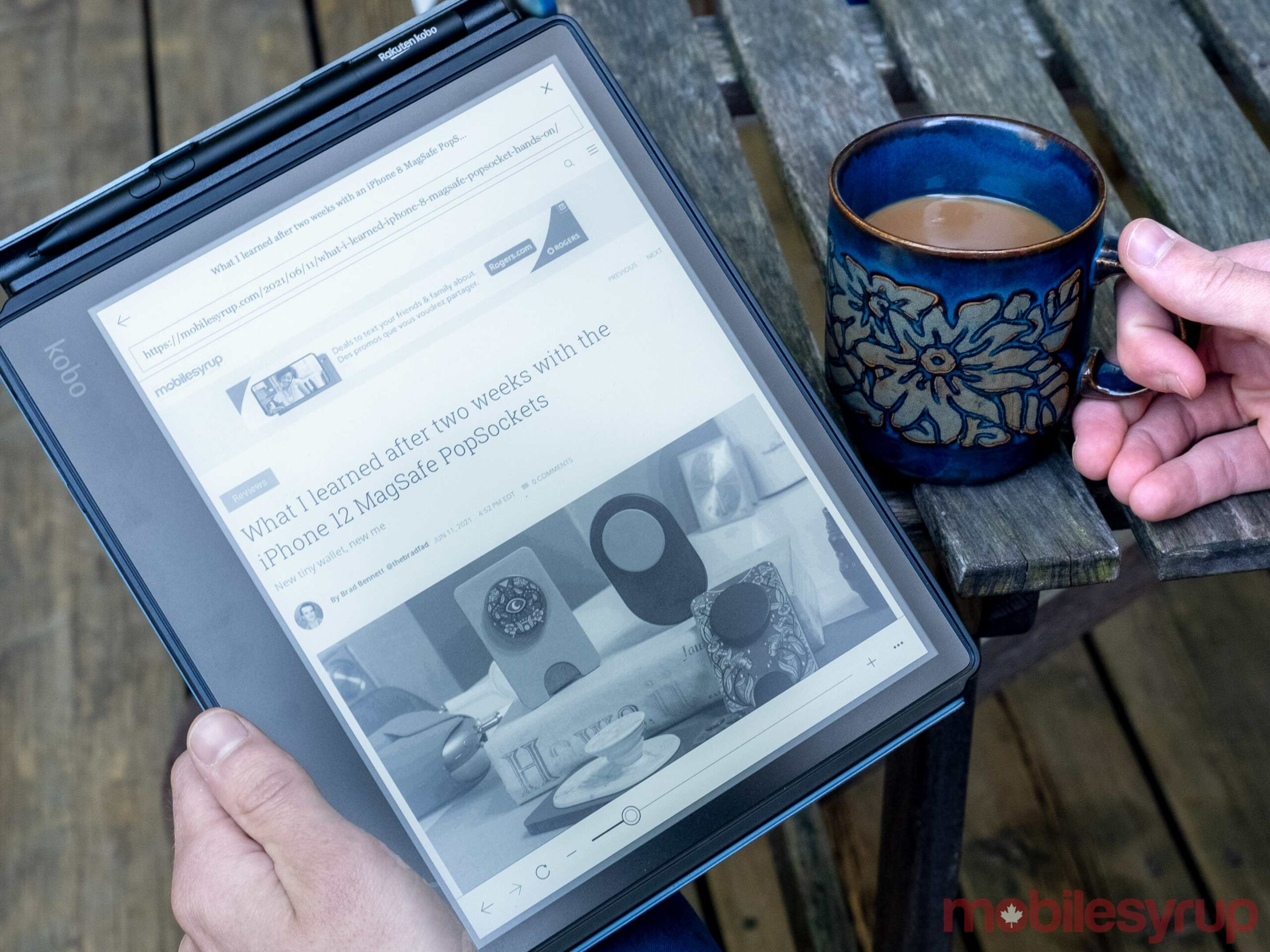 It’s also worth pointing out that some Elipsa beta features allow you to browse the web, but it’s definitely still in beta and shows you a giant blown-up mobile web page instead of a desktop one. This could be useful to read long-form articles on, but scrolling is a pain, so you’re better offloading them into Pocket and reading web content on the Elipsa that way.

There are also a few games in the beta section that are pretty fun, but the slow screen refresh kind of makes them an exercise in patience to play. There’s a slide puzzle, sudoku, solitaire and word scramble. The worst part about the Sudoku game is that you can’t even use the stylus to fill out the puzzle.

Don’t throw the book at me 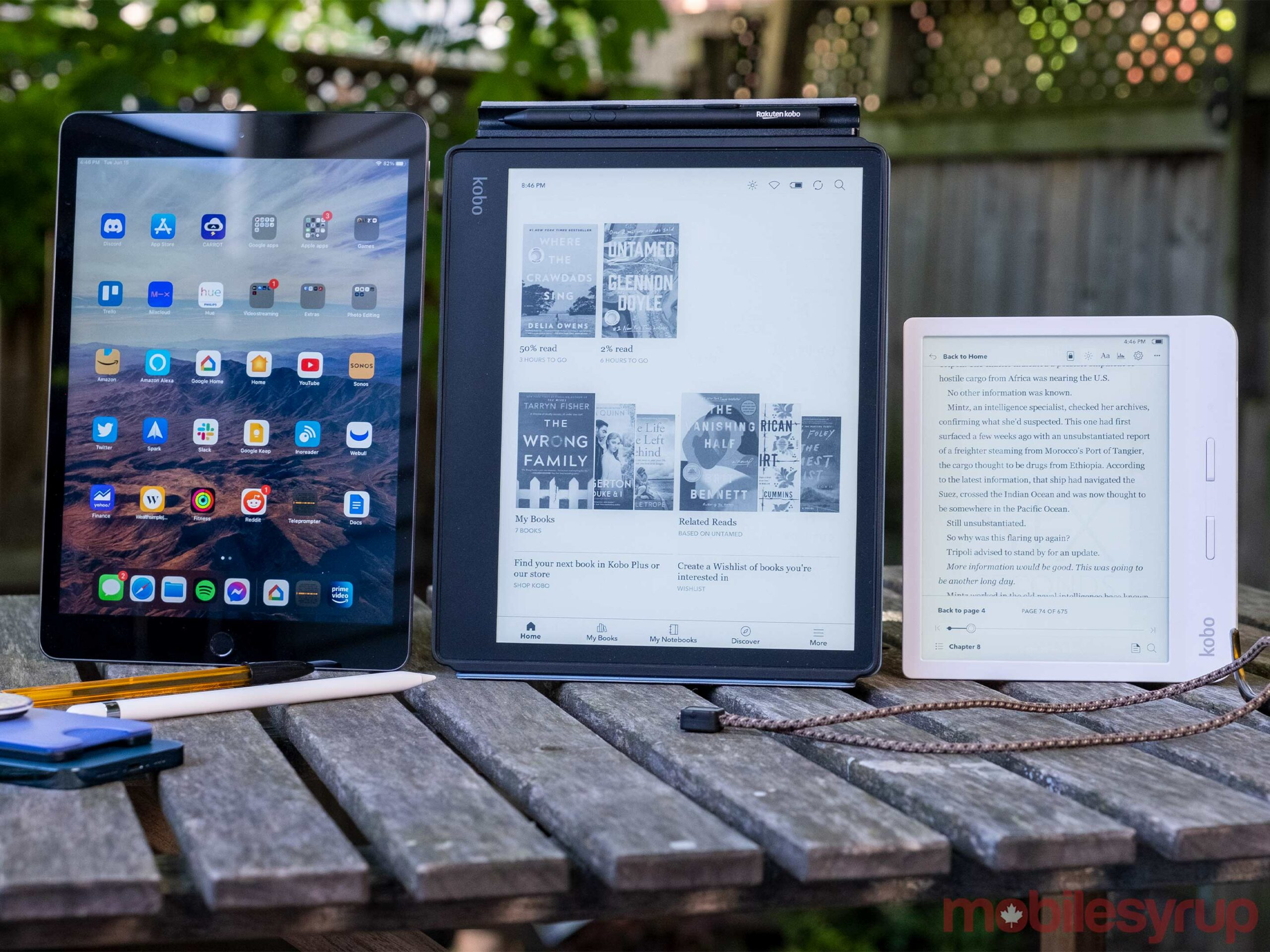 The price is hard to swallow

When it comes down to it, I think anyone that’s looking at this device as a digital notepad will likely get more use out of a base level iPad and Apple Pencil ($558). This is a little more costly, but you can browse the web, draw, play games, get work done and several other things, though it doesn’t feature an e-ink screen.

If you just want a good e-reader and you don’t need a massive display, I’d recommend the Kobo Libra H20. This e-reader is small enough to be held for hours, has a better backlight and even includes physical buttons that make turning pages convenient with one hand.

If you need the giant screen so you can make the text huge to read, the Elipsa will get the job done. Or, if you’re a huge fan of taking notes and you just want a digital e-ink notepad, this works for that too -- to be clear, it doesn’t work as well as an iPad, but it’s still pretty good.

On its own, the Elipsa is a really great device. It features solid build quality and works well. However, whenever you compare it to other devices, it’s not worth the $500 price tag in Canada. The Elipsa is up for pre-order now, and will go live on June 24th

"On its own, the Elipsa is a really great device. It features solid build quality and works well. However, whenever you compare it to other devices, it’s not worth its $500 price tag..."