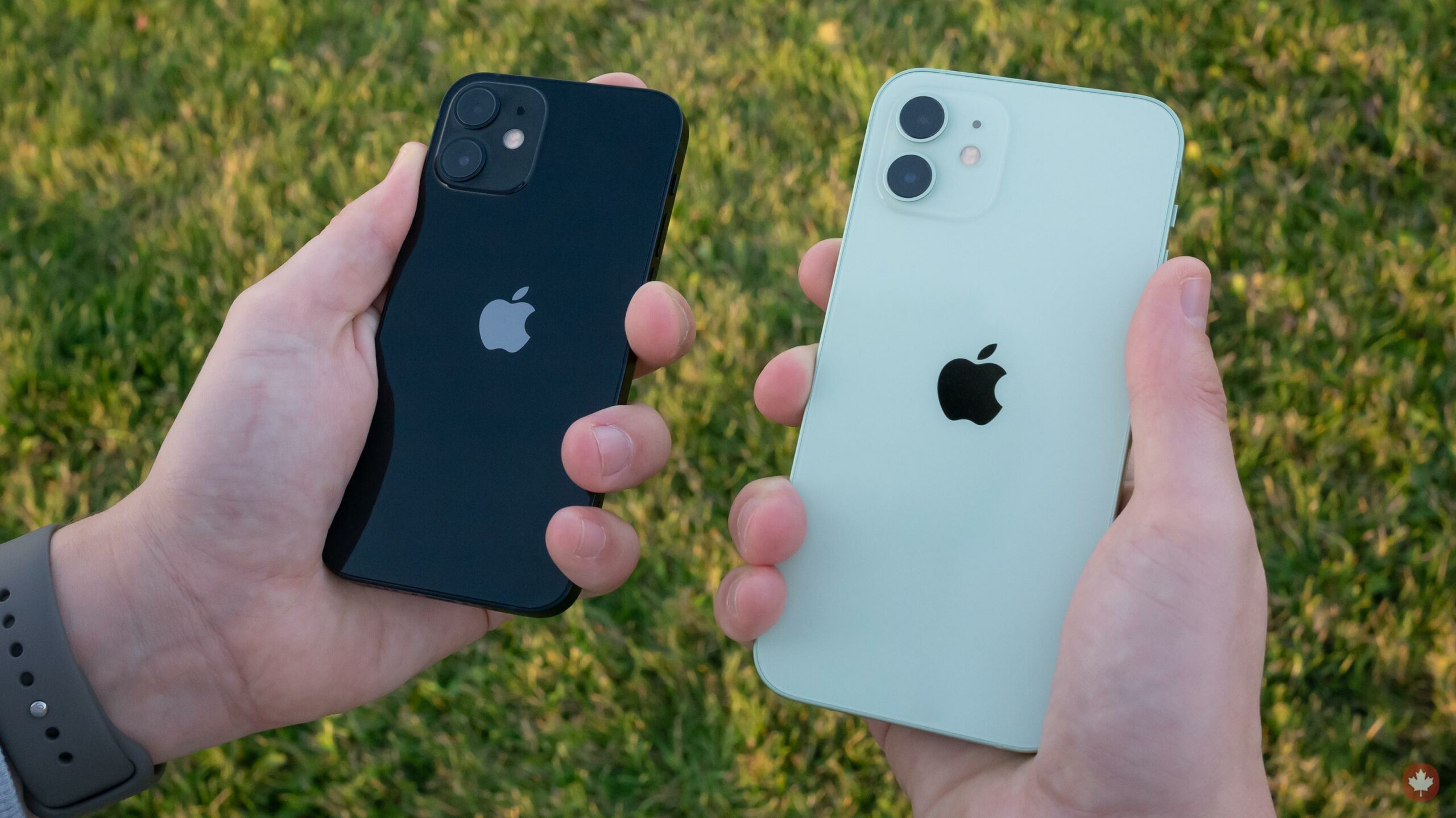 One thing is abundantly clear about Apple’s iPhone 12 line: the standard iPhone 12 is the device most Apple users should consider purchasing if they’re in the market for a new iPhone.

While this was also the case with last year’s iPhone 11, the upgrades Apple has made to the smartphone, including the iPhone 12/iPhone 12 Mini’s new 6.1-inch/5.4-inch Super Retina XDR OLED display, 5G capabilities, its A14 processor and more, amount to an impressive smartphone package. 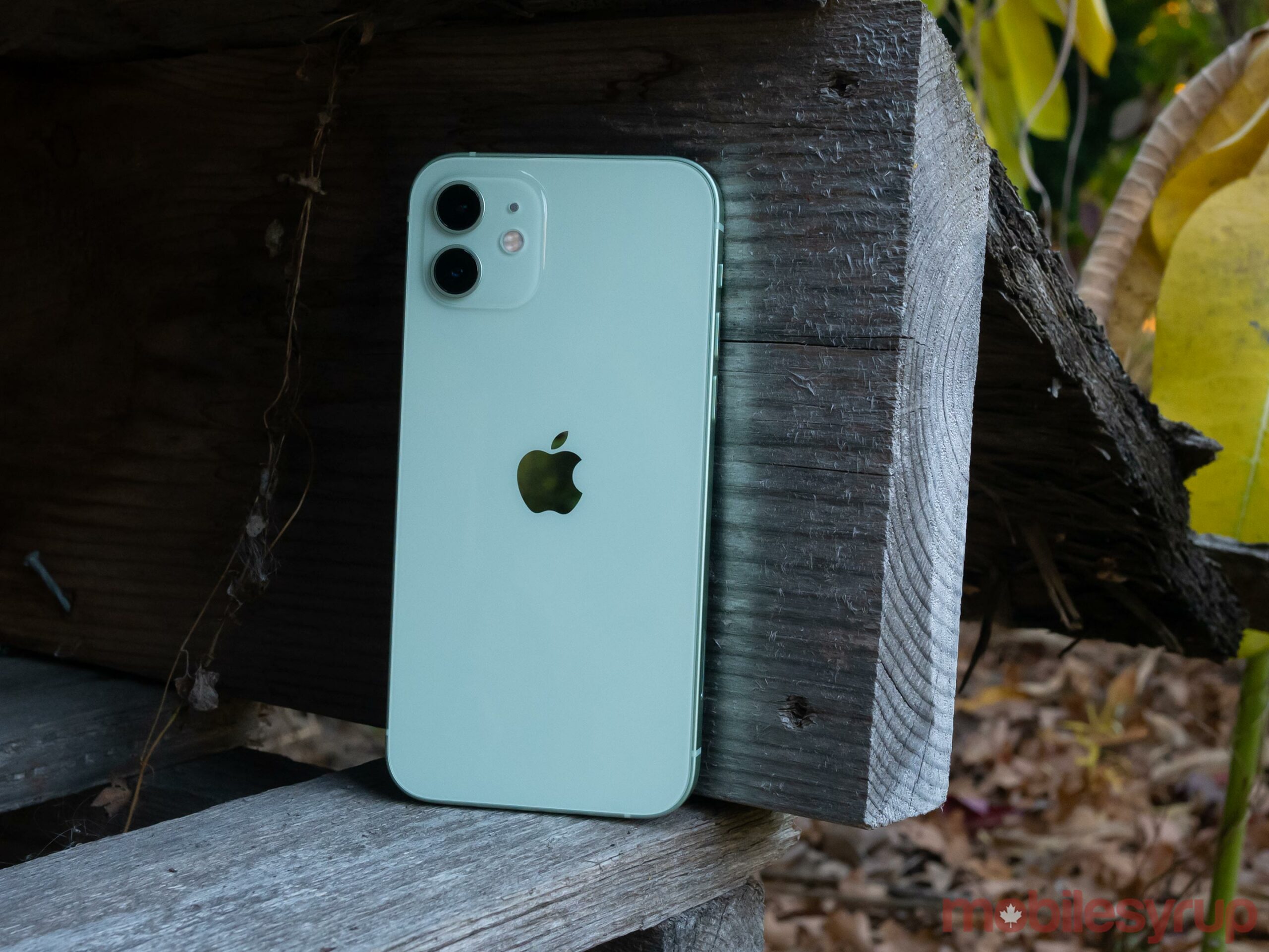 As expected, these upgrades also come at a price increase, with last year’s iPhone 11 costing $849 and the iPhone 12 bumping the price up to $1,129. A $280 difference is a pretty substantial price jump any way you look at it, though the inclusion of an OLED display helps soften that blow. On the other hand, the iPhone 12 mini costs a slightly more reasonable $979.

With all that in mind, it’s clear the iPhone 12/12 mini are likely the devices most Apple users should be interested in.

Update 09/11/2020: This review was updated with photos, image comparisons and information about the iPhone 12 mini. The review score was not changed. 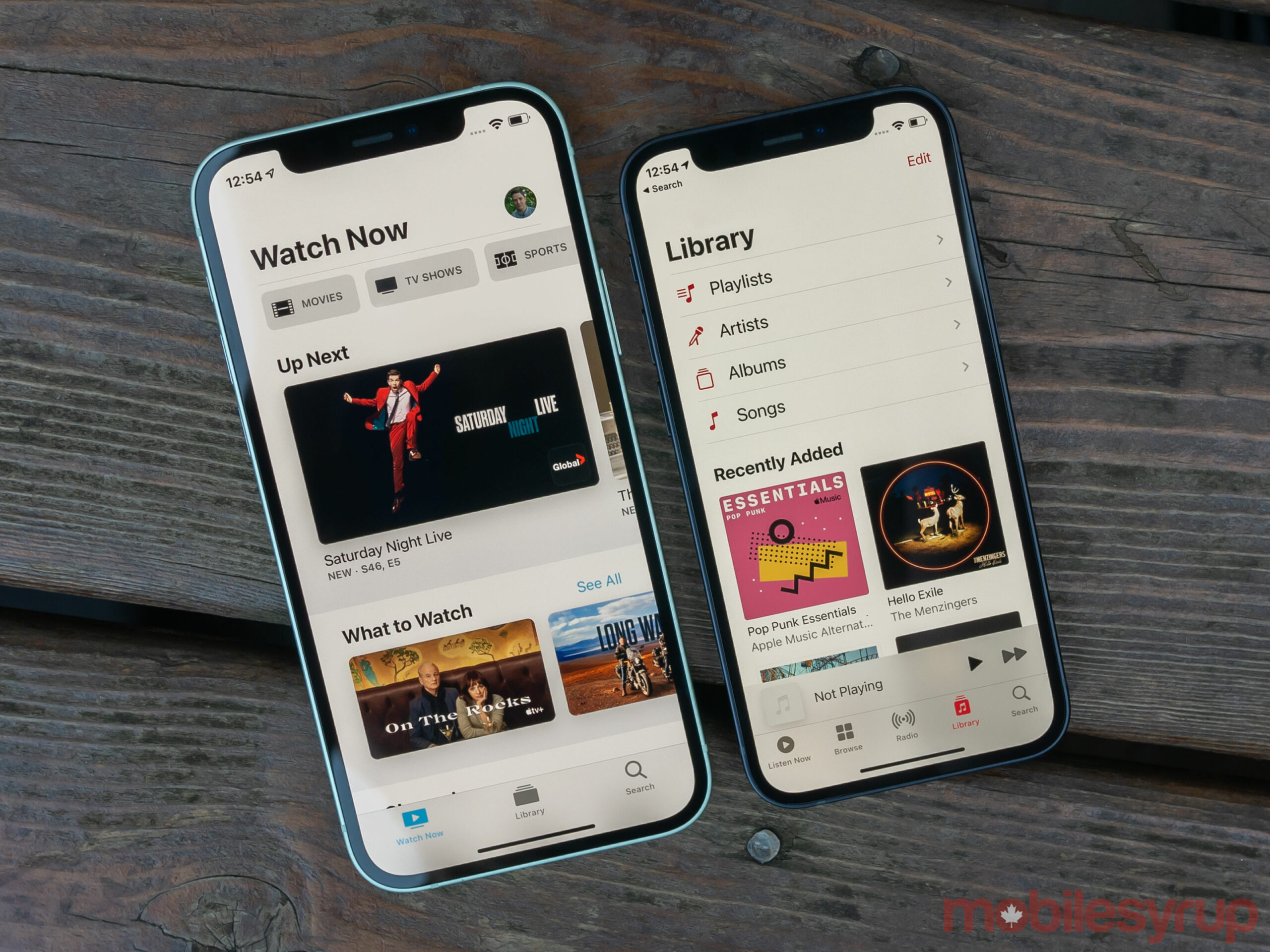 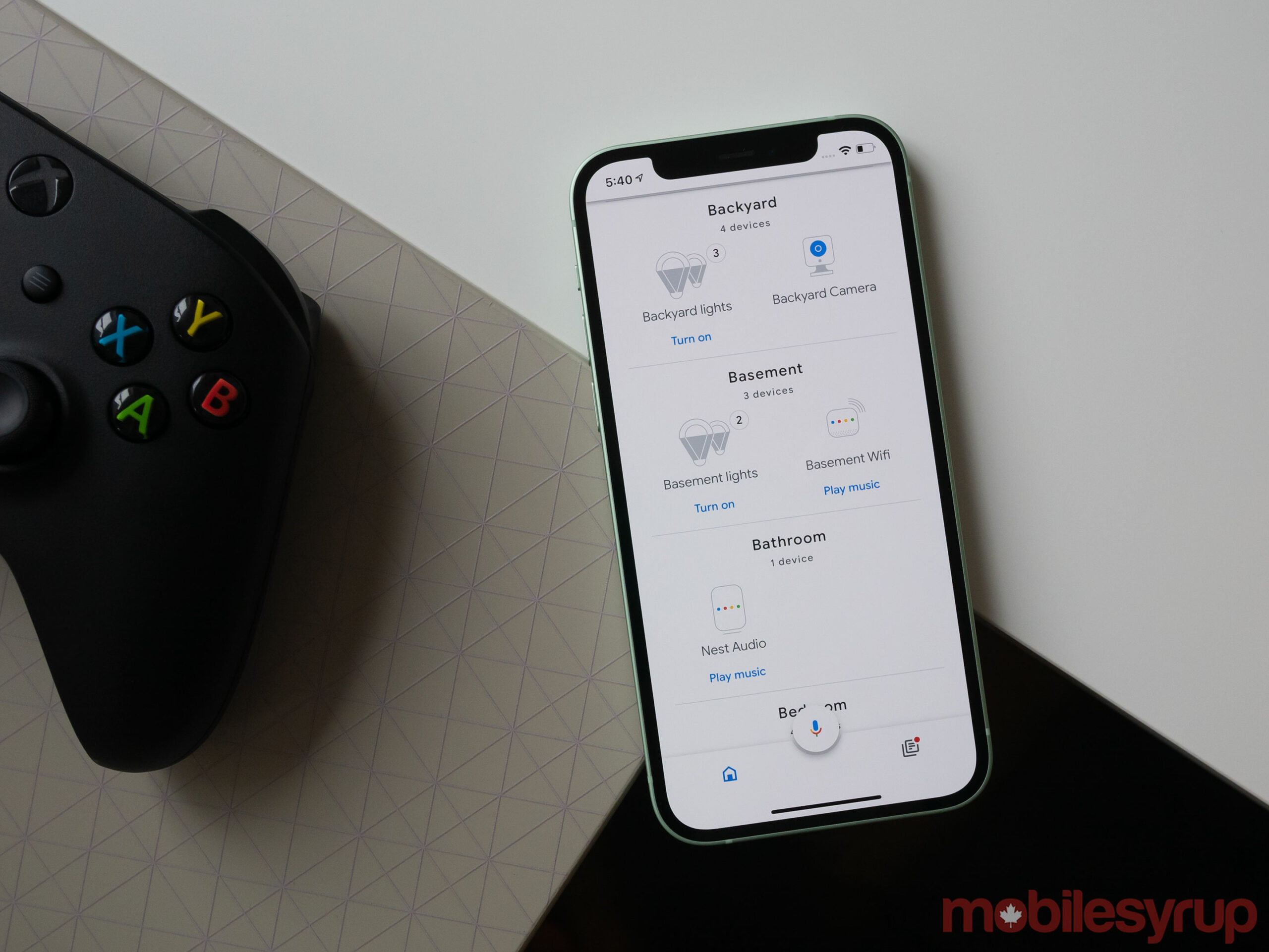 The smartphone features the same flat-edged iPad Air/iPhone 4-inspired design as the iPhone 12 Pro, but its matte aluminum edges get far less greasy than the stainless steel border featured in its higher-end counterpart. This gives the device a cleaner look when it isn’t inside a case and makes the smartphone feel better when you’re holding it in your hand. 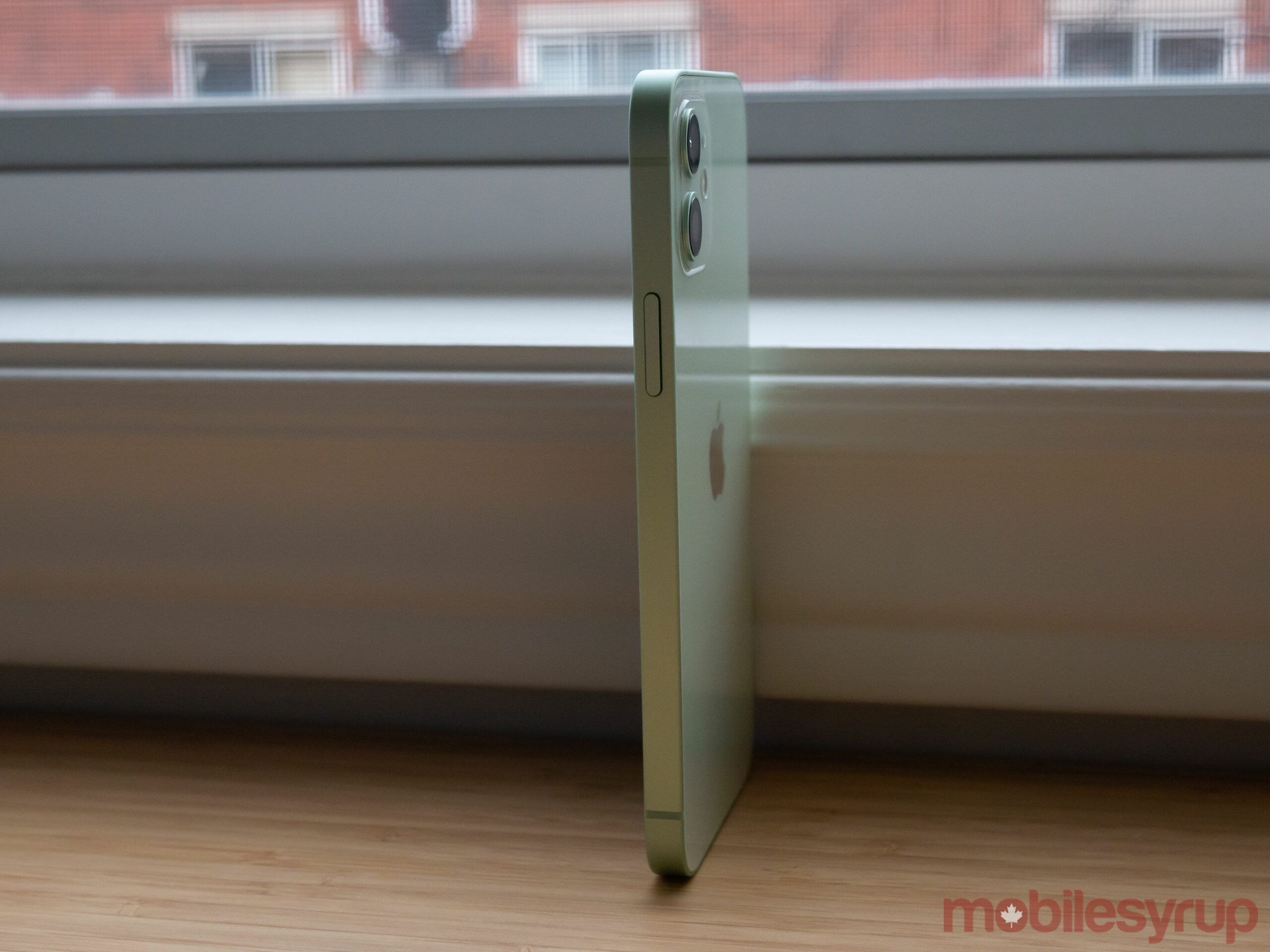 Like the iPhone 12 Pro, the iPhone 12/12 mini features a ‘Ceramic Shield’ front that Apple claims is more durable than previous iPhones. It’s impossible to verify this statement, but given how shockingly hardy the iPhone 11 was, I tend to believe Apple.

The smartphone itself is roughly 15 percent smaller than the iPhone 11, but it still features a 6.1-inch display thanks to its reduced bezels. This makes the device easier to hold in one hand than its predecessor. The 5.4-inch iPhone 12 mini feels ridiculously small, measuring in at even tinier than the iPhone SE (2020). Though I found the smartphone too small for my taste, it’s great to see Apple offer a modern device with this display size. There’s definitely an untapped market out there for smaller smartphones like the iPhone 12 mini. 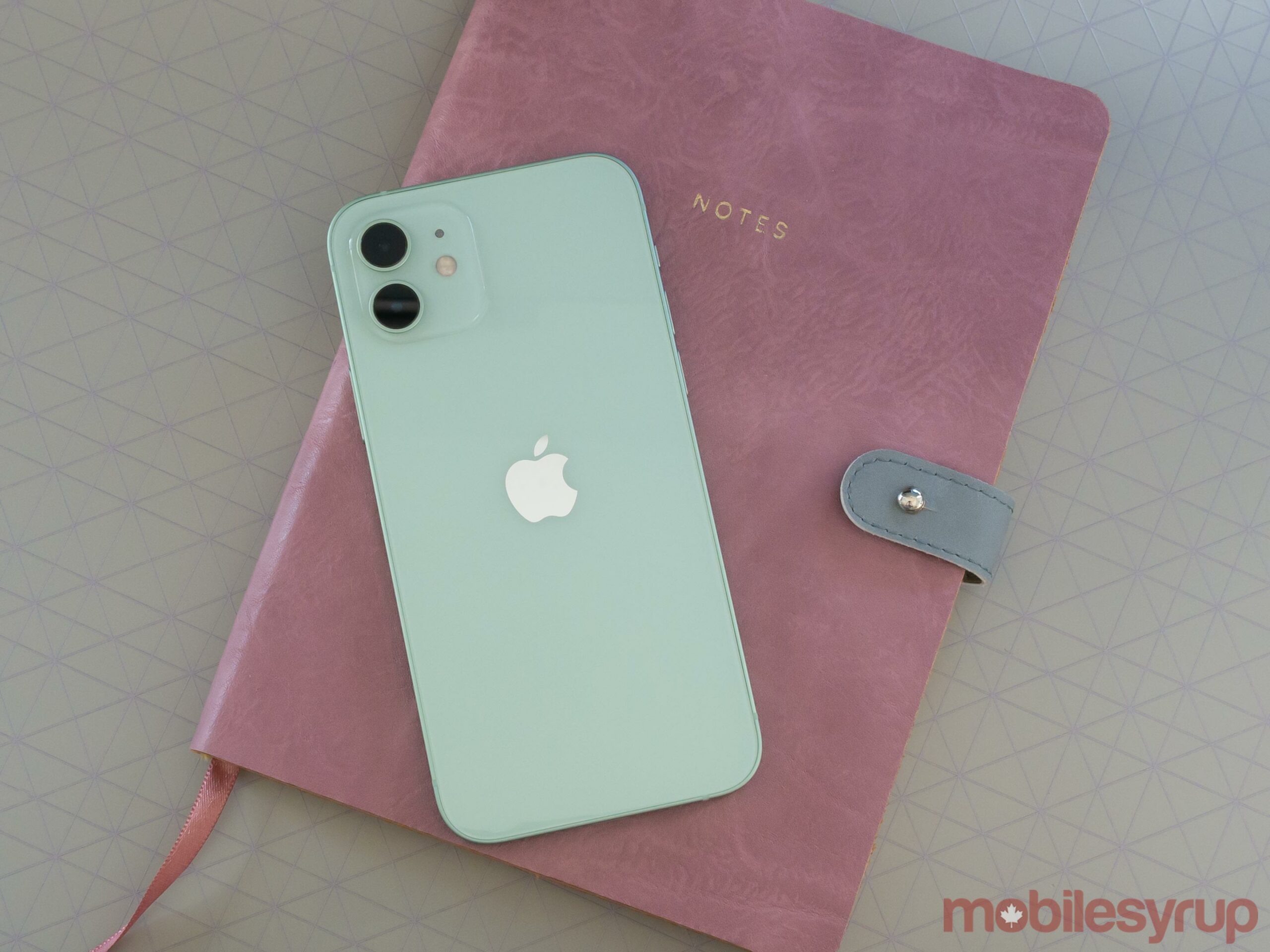 Colour-wise, I prefer the hues Apple offered last year with the iPhone 11, but the new green colour Apple sent me to review looks stunning. It’s light green and features an intensity not present in the iPhone 11’s colours. The black iPhone 12 mini, unfortunately, features a glossy, fingerprint and dust magnet rear that I’m not fond of. The iPhone 12 and iPhone 12 mini are available in the following colours: ‘Black,’ ‘White,’ ‘Green,’ ‘Blue’ and ‘Product Red,’

Each colour and the still-grease-resistant back glass — with black being the only exception — also match the iPhone 12’s overall hue, giving it a uniform look. 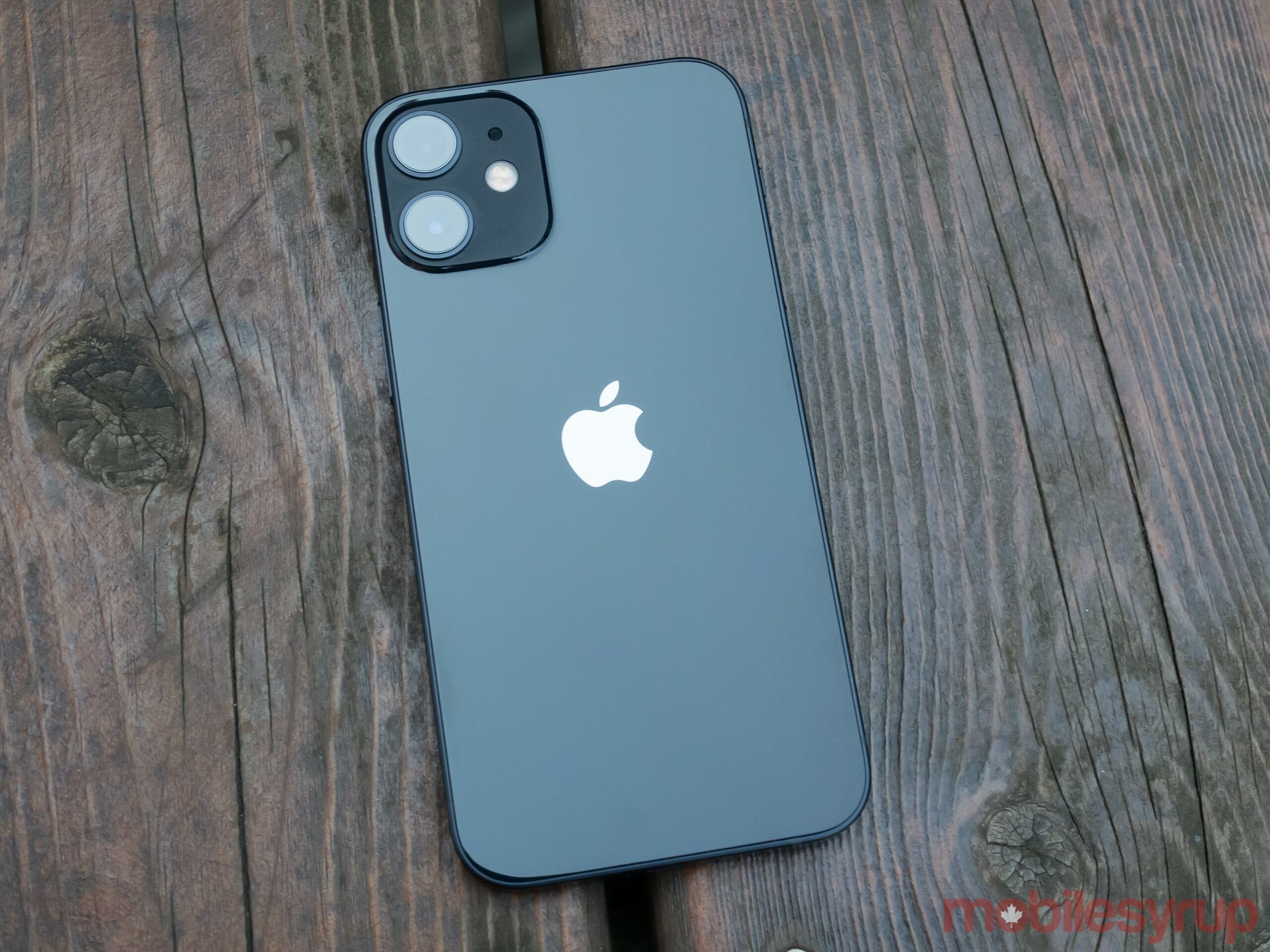 It’s worth noting the squared-off design might take some long-time iPhone users a little getting used to and, for a select few, could even feel like a step backwards.

While I initially counted myself in this camp, the design quickly grew on me. It looks and feels great and is a solid step forward for Apple’s iPhone line in terms of aesthetic. 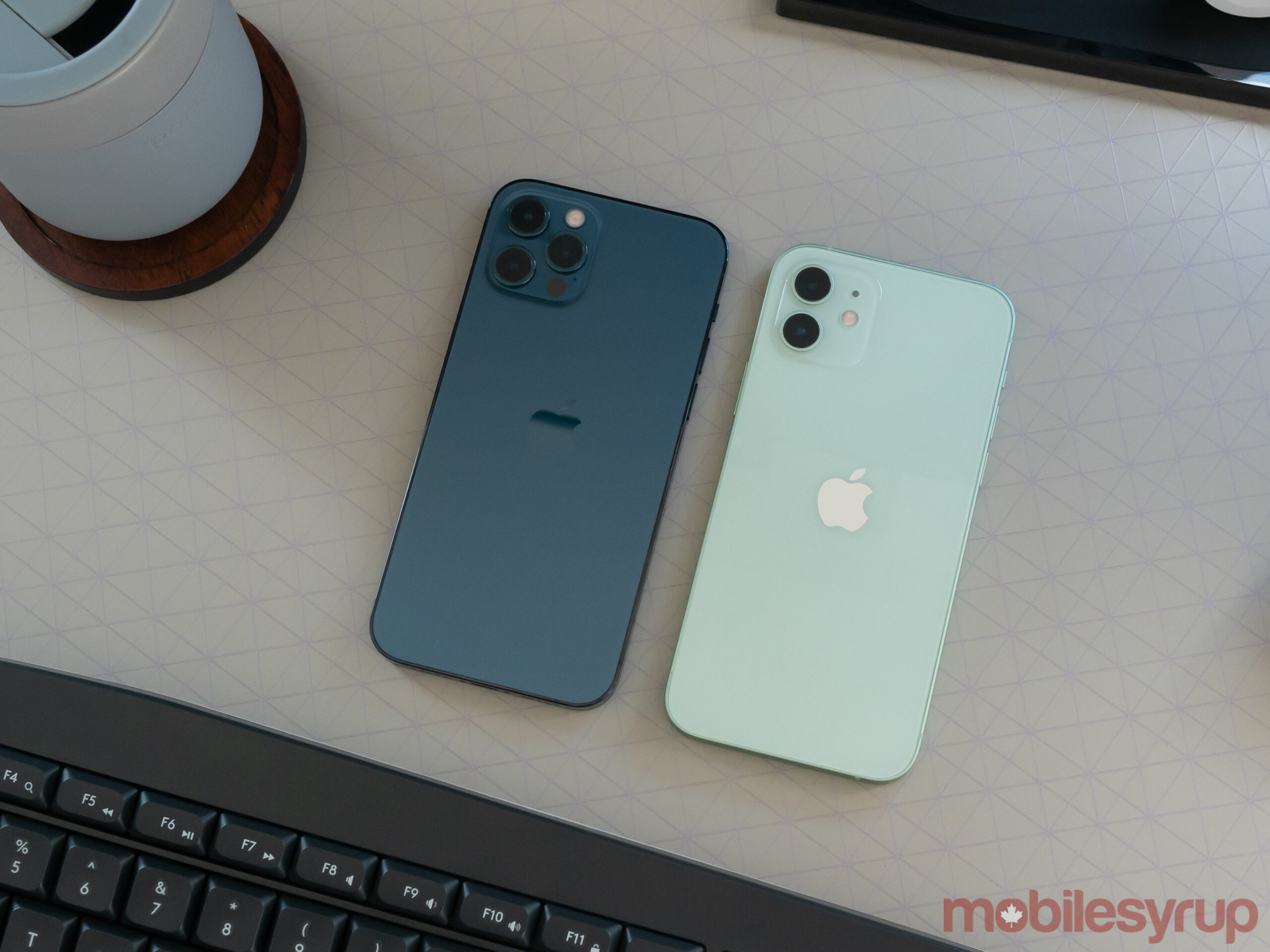 What’s most interesting about this year’s iPhone lineup is the iPhone 12/12 mini and iPhone 12 Pro/iPhone 12 Pro Max are nearly identical in several ways. 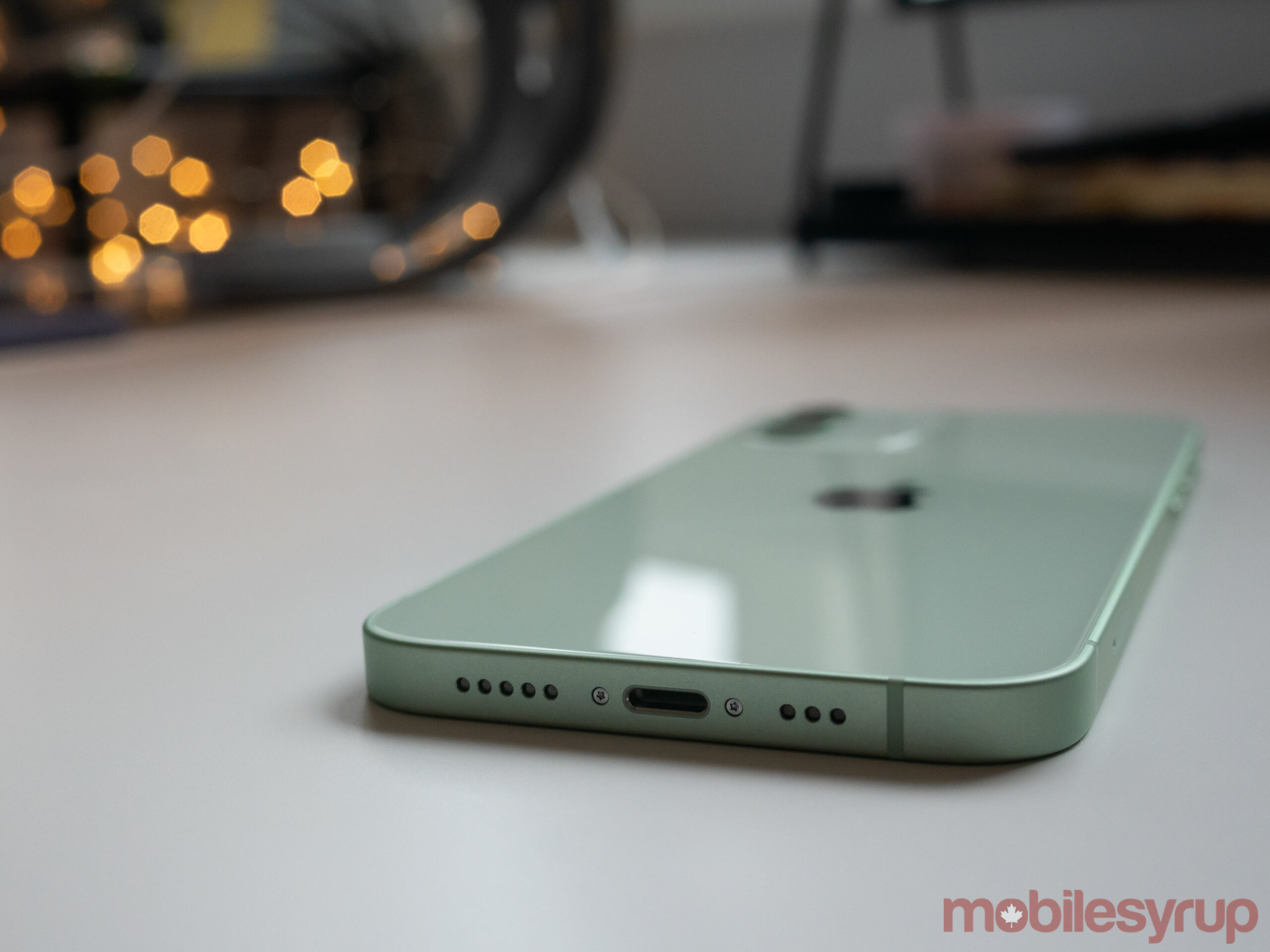 The only difference is the iPhone 12 Pro and iPhone 12 Pro Max’s standard max brightness measures in at 800 nits compared to the iPhone 12’s 625 nits. This change isn’t noticeable at all, and in general, the iPhone 12 and iPhone 12 mini’s display looks stunning and a significant step above last year’s solid but rapidly ageing Liquid Retina LCD screen that came in at a 1,792 x 828 pixel resolution. Video content with apps like Netflix and YouTube, as well as games and even just browsing the internet, all look great.

Like last year, the iPhone 12 features the same chip as its more expensive counterpart, the new A14 Bionic processor. Though I don’t put much stock into benchmarks because they don’t speak to how a phone operates in the real world, the iPhone comes in at 1,596 for its single-core score and 4,025 for its multi-core score with Geekbench, which is a substantial increase over the A13-equipped iPhone 11 coming in at 1,326 and the 3,397. My experience with the iPhone 12 and iPhone 12 mini has been extremely smooth over the last few days and I haven’t encountered a single instance of lag. 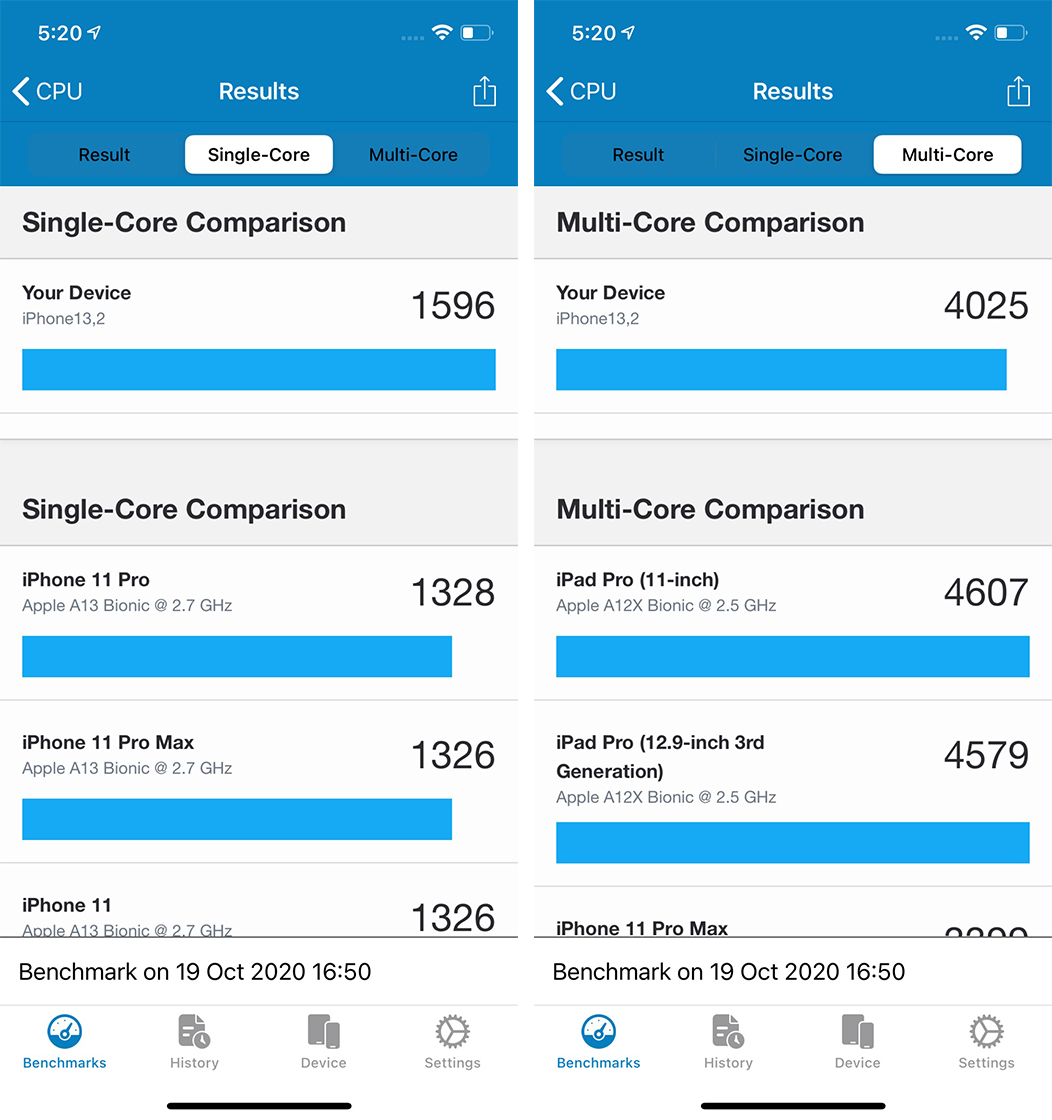 Regarding battery life, I found that the iPhone 12 and iPhone 12 mini come in at roughly a day with moderate use, which is similar to my experience with the iPhone 12 Pro. 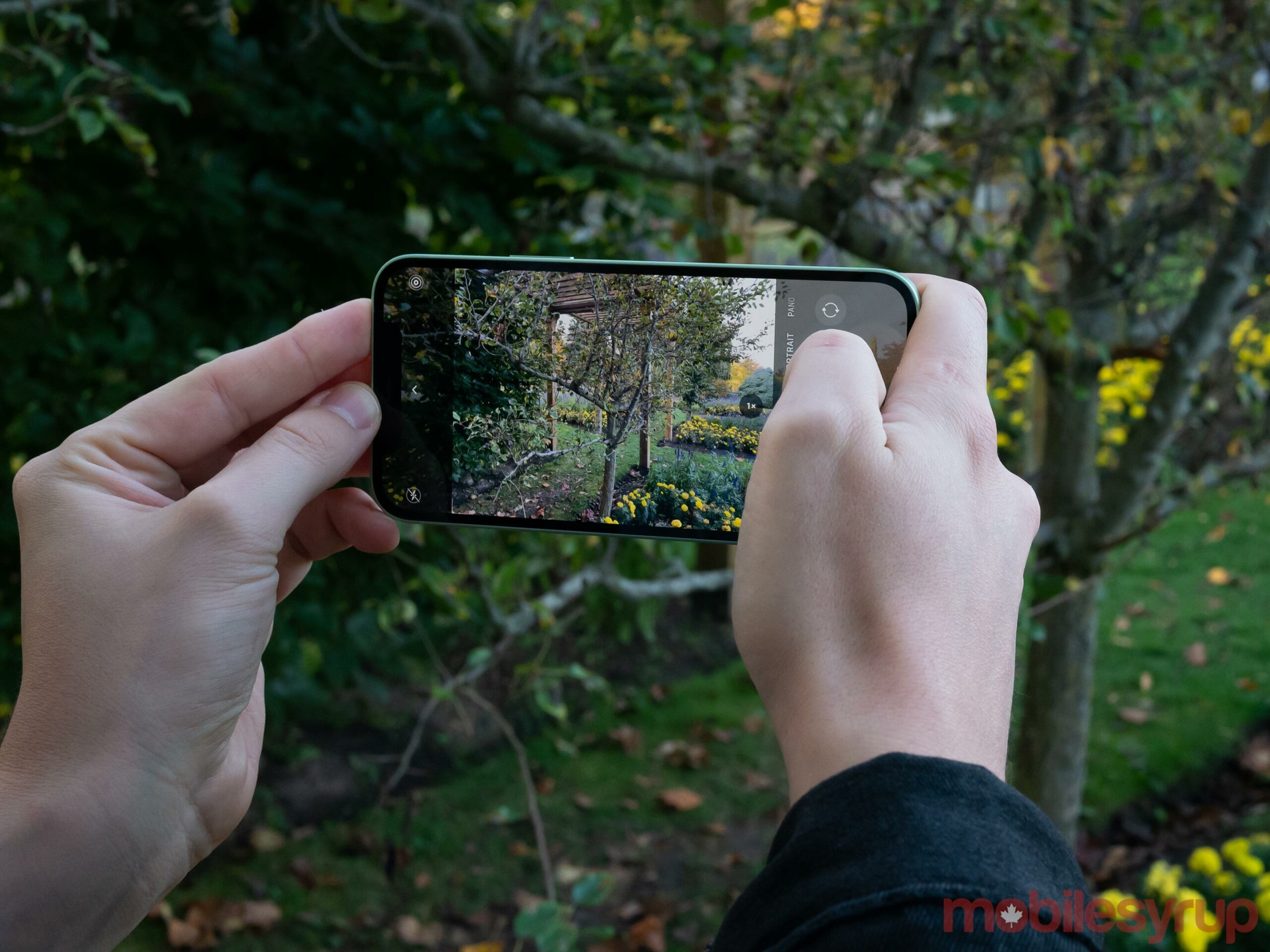 I’d argue a wide-angle lens is likely more useful for taking group shots and capturing landscapes, but it really depends on the type of photography you do with your smartphone. For example, I value 2x/2.5x zoom over wide-angle photography because I often find myself shooting landscapes and not large groups of people.

While the ultrawide lens measures in at the same f/2.4 aperture, the wide lens comes in at f/1.6 and now has seven-elements, which allows more light into the sensor, resulting in overall brighter, less noisy images, especially when under low-light.

While not a significant hit to camera quality, this means the iPhone 12 doesn’t benefit from the same quicker focusing and improved low-light performance as the iPhone 12 Pro. However, it does still feature Apple’s new Smart HDR 3 technology coupled with Deep Fusion, night mode and, of course, Portrait Mode. 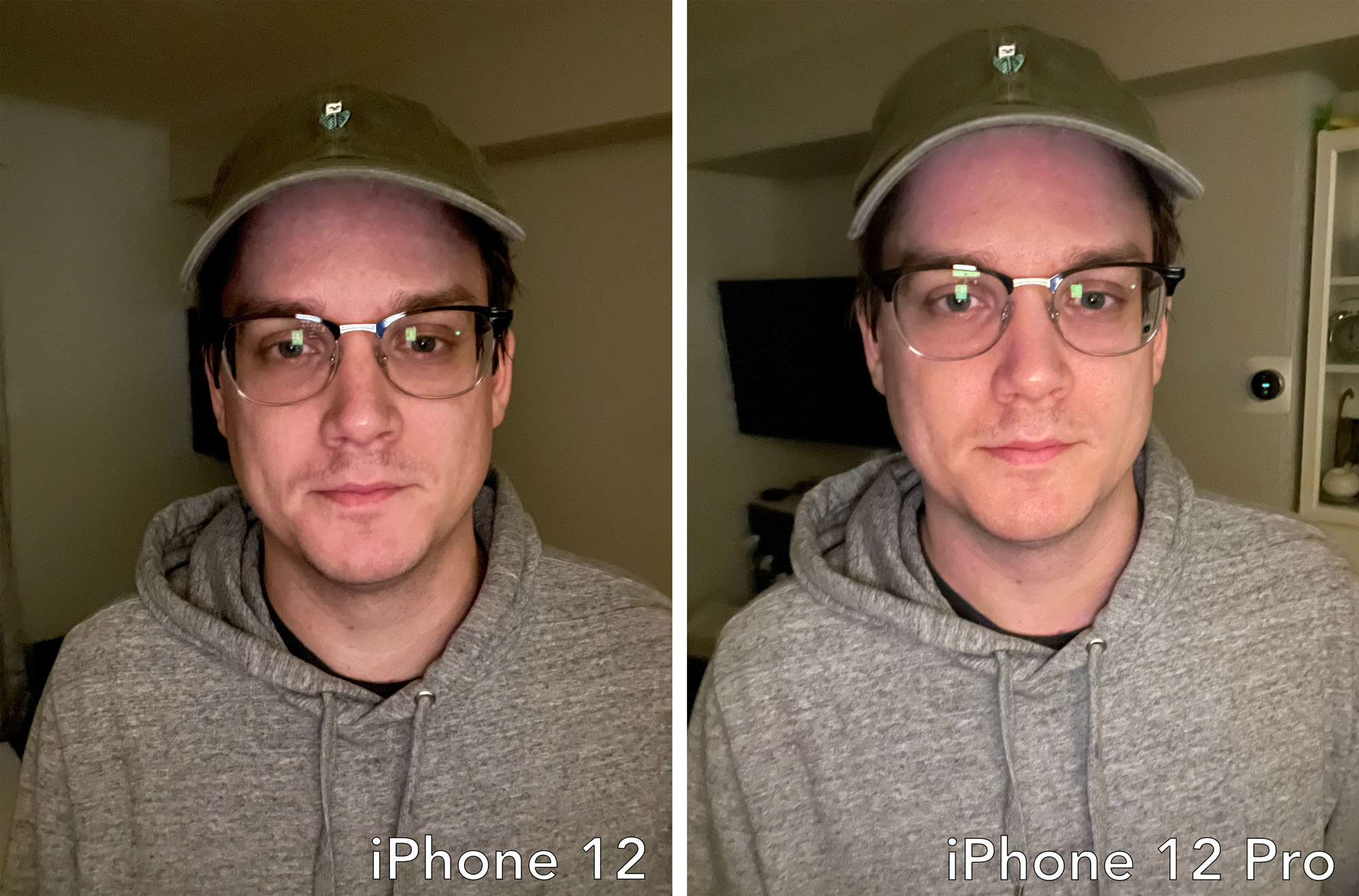 Photos generally look better than those shot with the iPhone 11. However, they’re slightly noisier, a little less sharp and don’t feature as much contrast as what the iPhone 12 Pro and iPhone 12 Pro Max can shoot. Overall, the difference is surprisingly marginal. 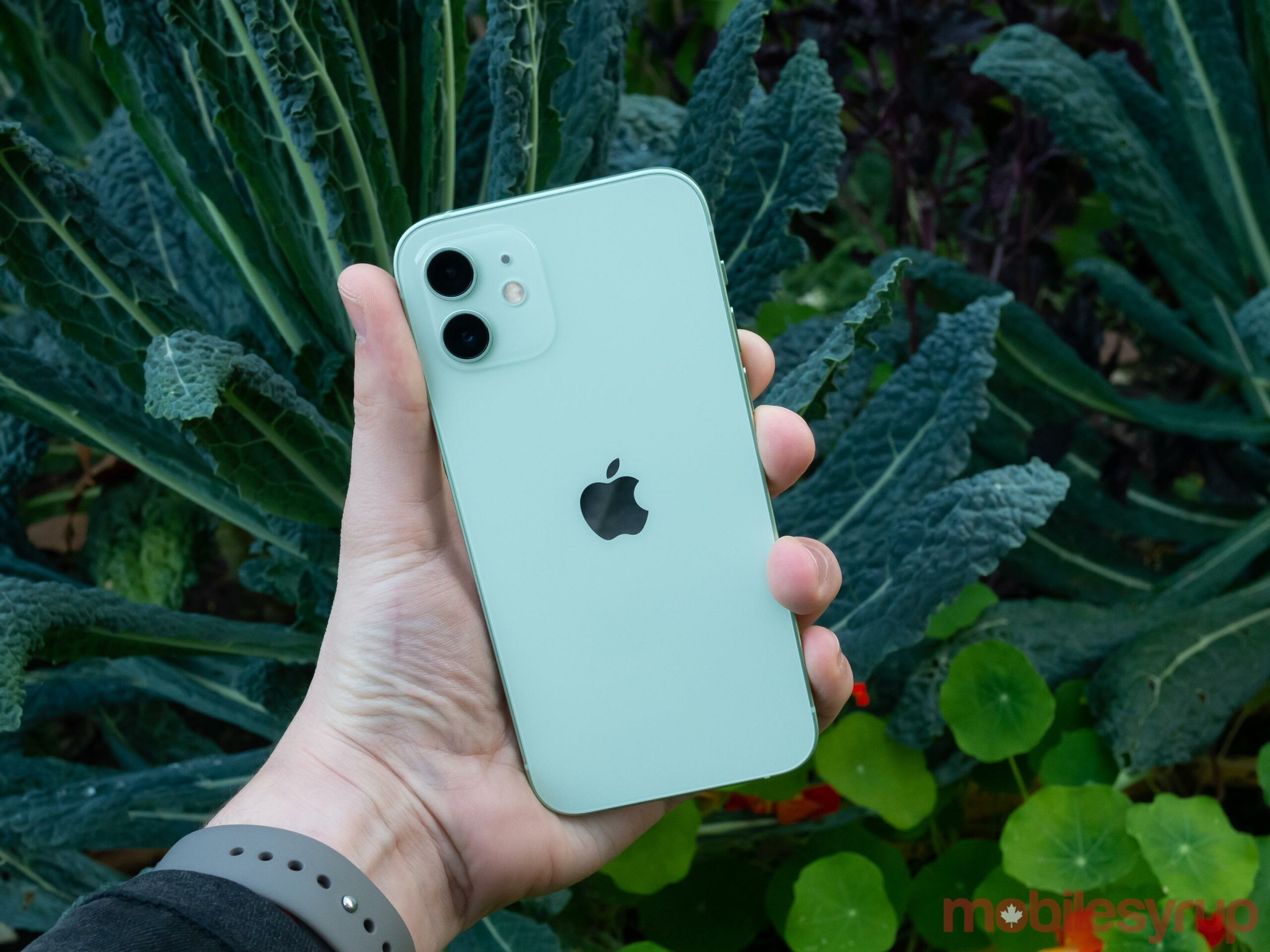 Finally, the iPhone 12 also features 10-bit Dolby Vision HDR video recording — a first for any smartphone — that can only be viewed on supported televisions and monitors.

That said, even YouTube doesn’t support the format. The iPhone 12 only includes HDR 4K Dolby Vision video at 30fps compared to the iPhone 12 Pro’s 60fps. 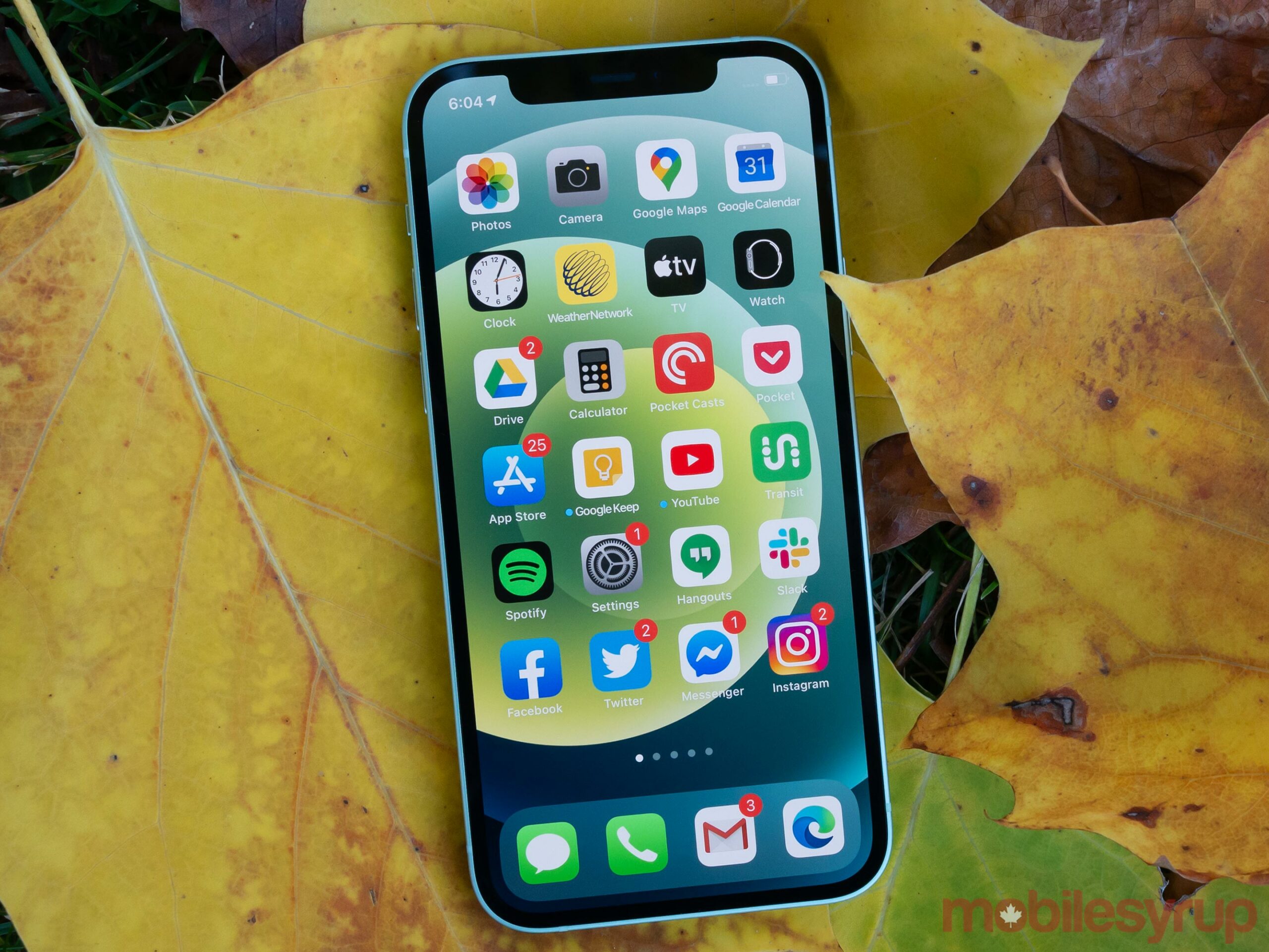 Unlike in previous years, the iPhone 12/iPhone 12 mini and the iPhone 12 Pro/iPhone 12 Pro Max offer a very similar smartphone experience, and because of this, there are several aspects of the device this review doesn’t touch on.

If you’re interested in learning more about what it’s like to use an iPhone 12 with 5G in Canada and Apple’s MagSafe accessories, follow this link to my iPhone 12 Pro and iPhone 12 Pro Max review.

Other things worth noting are that the iPhone 12 features Face ID that seems just as reliable as last year, with authentication working roughly 95 percent of the time. 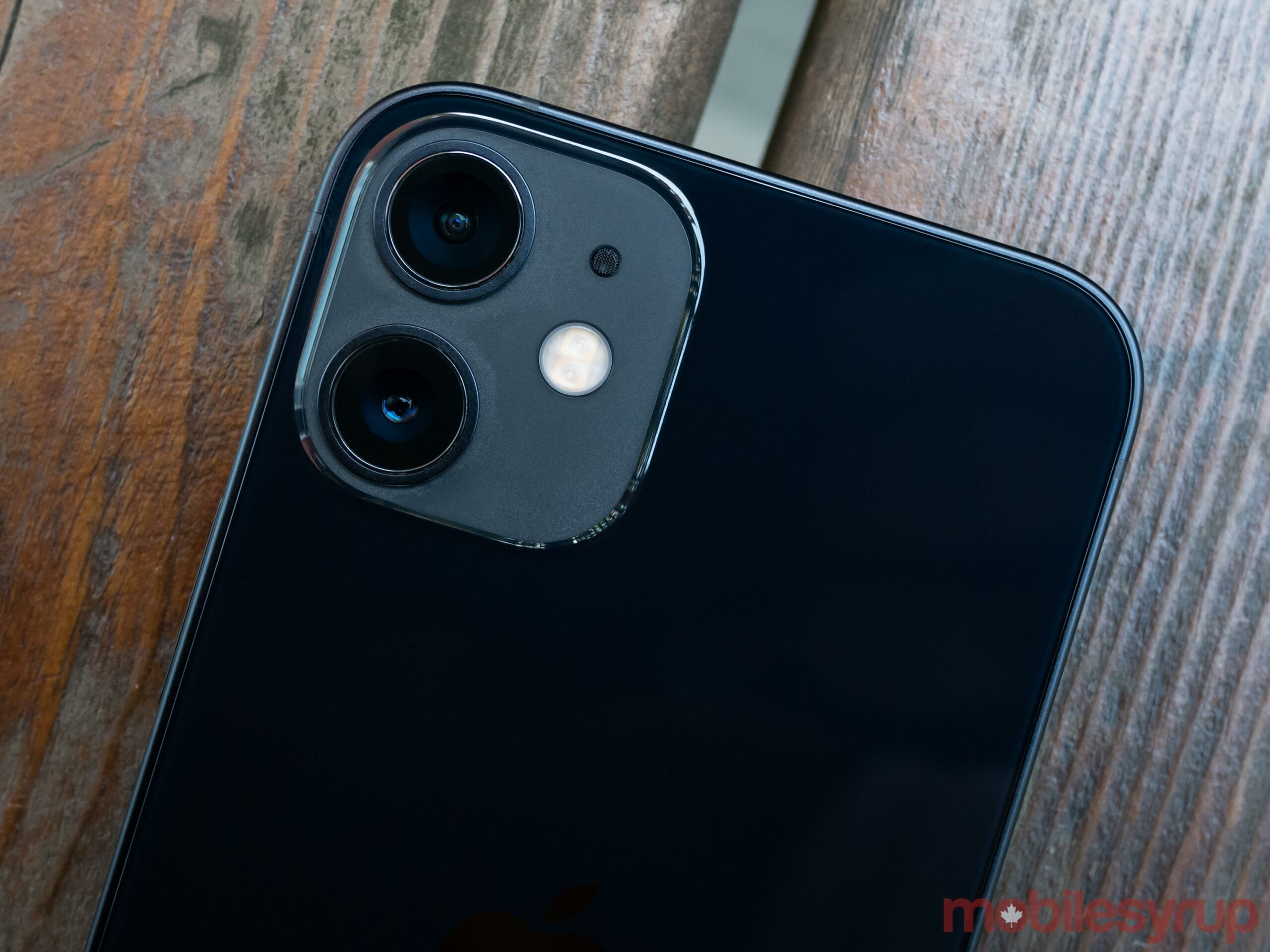 "The main takeaway from my time with iPhone 12 and iPhone 12 mini is that across the board, the average iPhone user likely won't need the features that the iPhone 12 Pro offer"

What features do want in your realistic 2021 dream phone?