Over the weekend, Apple updated its developer site with new statistics about which versions of iOS people are using. Unsurprisingly, the majority are running iOS 13 — 81 percent of all iPhone and iPod Touch devices, for that matter.

The news comes ahead of Apple’s all-digital Worldwide Developer Conference (WWDC), which kicks off June 22nd. If you’re curious about what Apple will unveil at WWDC, check out how to watch the conference here. 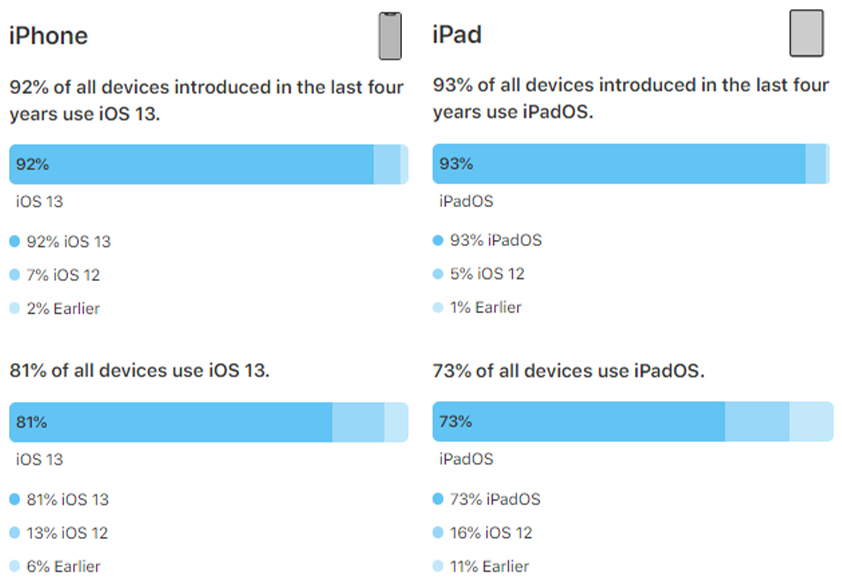 After launching iPadOS last year, Apple began sharing separate adoption statistics for its popular iPad tablets. According to the California-based tech giant, 93 percent of all iPads introduced in the last four years run iPadOS 13. Five percent run iOS 12 and one percent run earlier versions of iOS — it’s worth noting that before iPadOS, iPads ran on iOS, which is why it’s listed here.

When you widen the scope to look at all iPads, 73 percent run iPadOS 13, 16 percent are on iOS 12 and 11 percent run on earlier releases.

Wondering where Apple gets the data from? The company bases it off visits to the App Store. The data above is as of June 17th.

9to5Mac also points out that the ‘four years’ metric is likely included as a way to weed out older phones and tablets that can’t update to the newest software.

Apple often brings up statistics like this at the beginning of its keynote addresses. Expect to hear more about these numbers as WWDC kicks off on Monday.