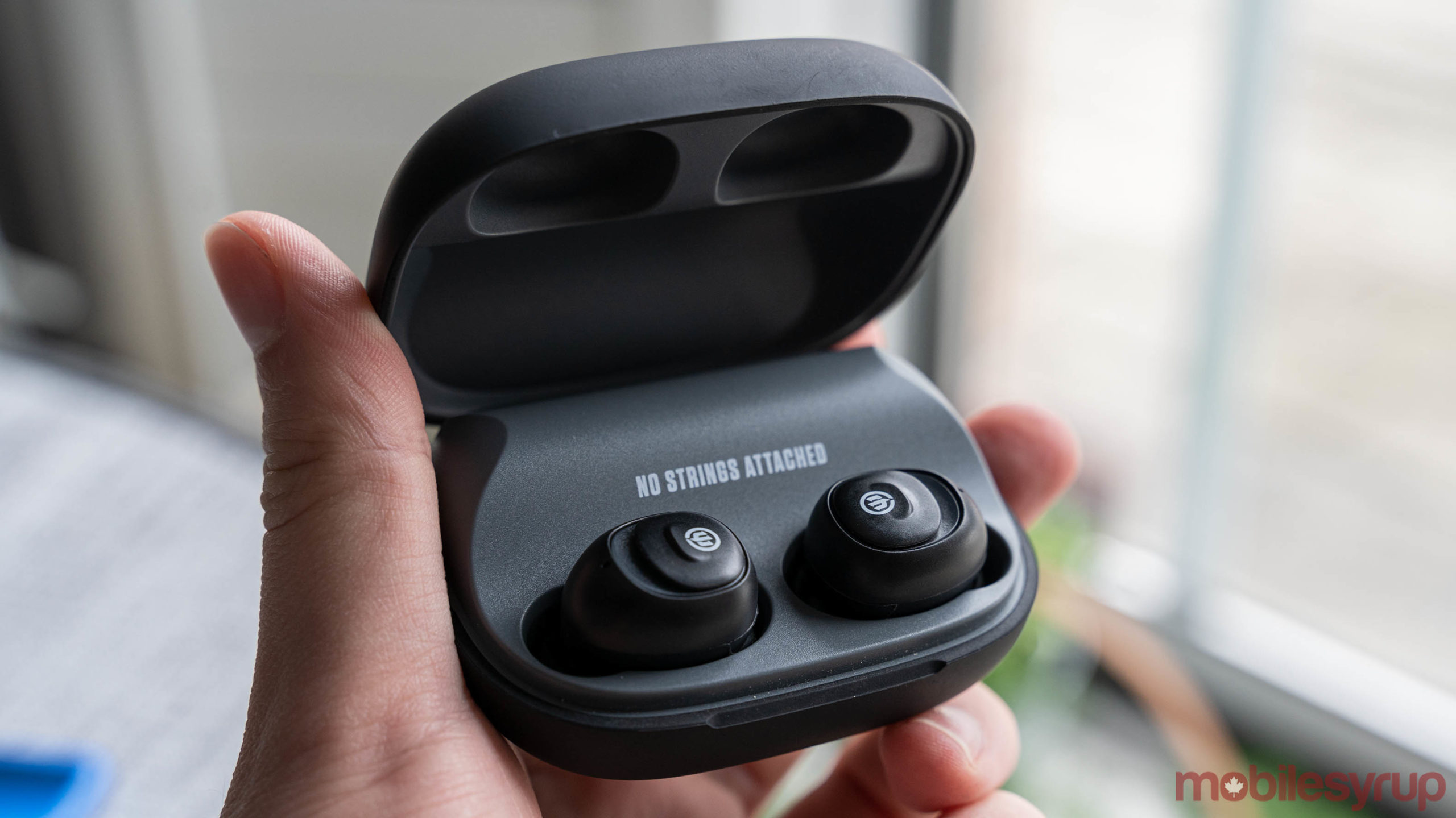 These days, it seems like nearly every company has some level of true wireless earbuds. Some earbuds want to go toe-to-toe with Apple’s wildly successful AirPods, offering intelligent features and noise cancellation. Others compete by undercutting the cost while offering similar audio quality or other features.

Enter Wicked Audio’s ‘Cron’ earbuds. While the earbuds’ name leaves something to be desired, these low-cost true wireless buds make up for it in almost every other way. Wicked Audio sent me a pair to test out and after a week of use, they’ve left me impressed. From phenomenal battery life to decent sound quality, the Cron are hard to beat at their price.

However, the most important part of any earbud is comfort. I like wearing earbuds like this throughout my day, as they’re useful for making phone calls and listening to my favourite music on Spotify. With lengthy use in mind, earbuds that hurt after a while aren’t ideal. 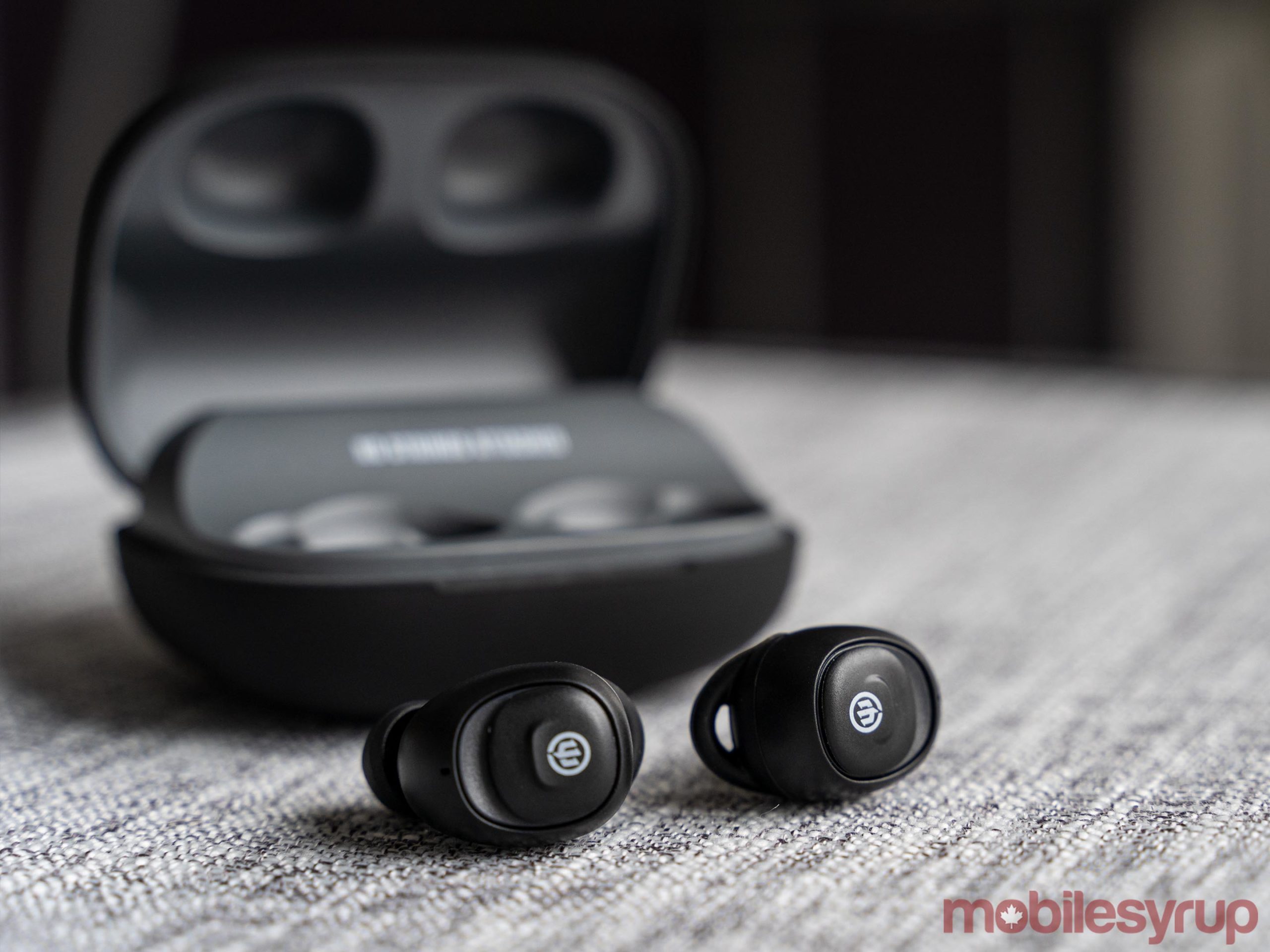 The Cron handle this aspect fairly well. The buds are small and light. I found they fit well. On the back of each bud is a ‘secure loop fin’ that helps it stay in your ear, which also worked well. Essentially, you put the bud in your ear tip first, then twist it down so the fin locks in place behind the ridge of your ear.

While it worked for me, someone with larger ears may have some trouble locking the buds in place. Oddly, you can remove the rubber fins, but the box didn’t include other sizes for someone with bigger ears. However, there are different rubber tips in the box, as with most earbuds. 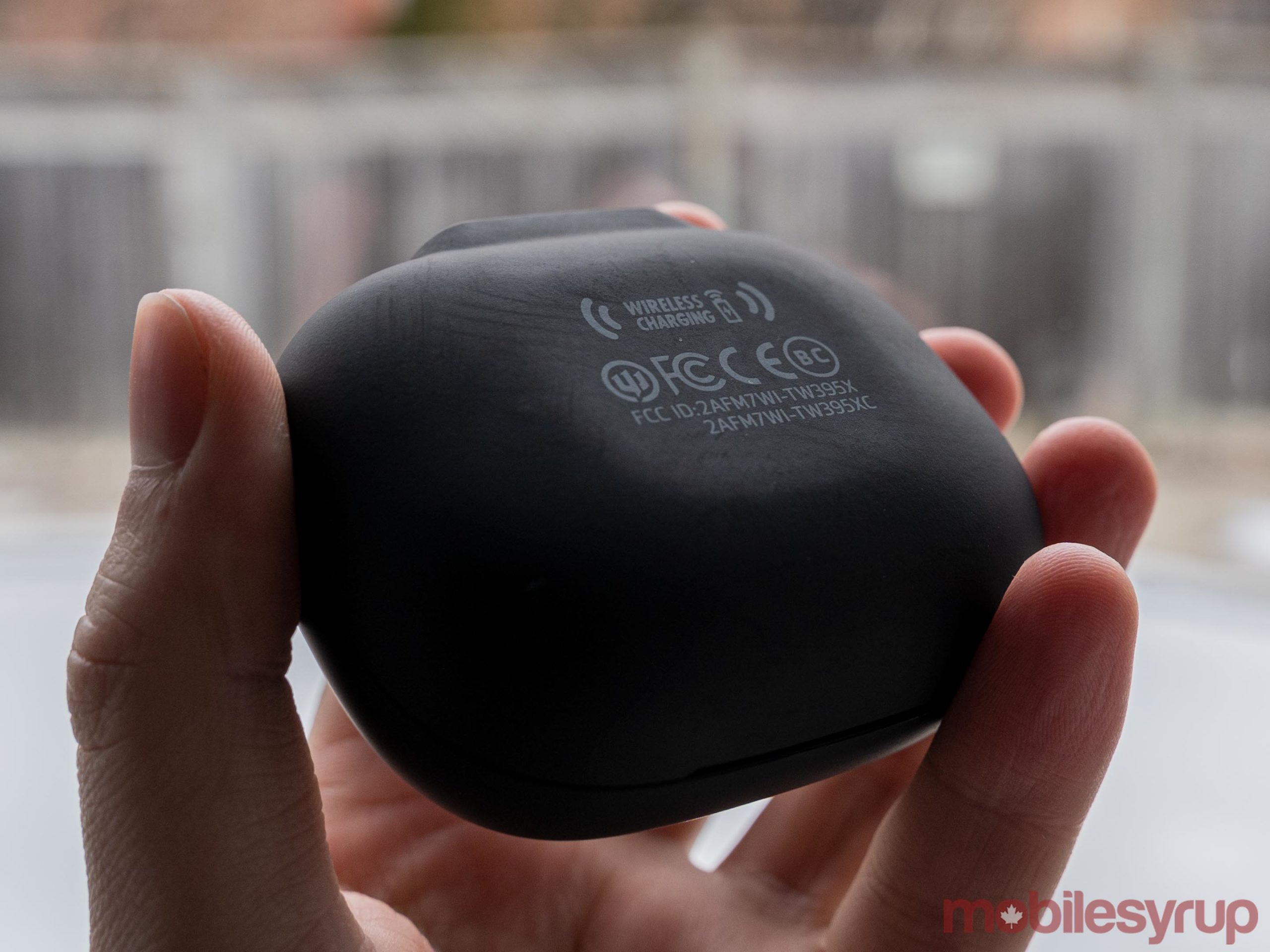 As comfortable as the earbuds were, I did find that prolonged use would make the edge of my ears sore. Adjusting the angle of the bud so the fin didn’t press into my ear as much helped in that regard. Regardless, I was still able to wear the Crons for longer than I could other true wireless buds.

It was a good thing, too, since the battery on these is hard to kill. The buds themselves sport about six hours of battery life, which I found to be accurate. However, the case pushes the total battery up to an impressive 60 hours. The Cron case doubles as a portable powerbank as well, sporting a USB-A port so you can plug your phone into it. It’s a handy feature, but one I didn’t find necessary — I’ve already got a sizable powerbank with USB-C and fast charging. For someone who wants to save some money, however, the Cron earbuds offer an excellent 2-in-1 solution. 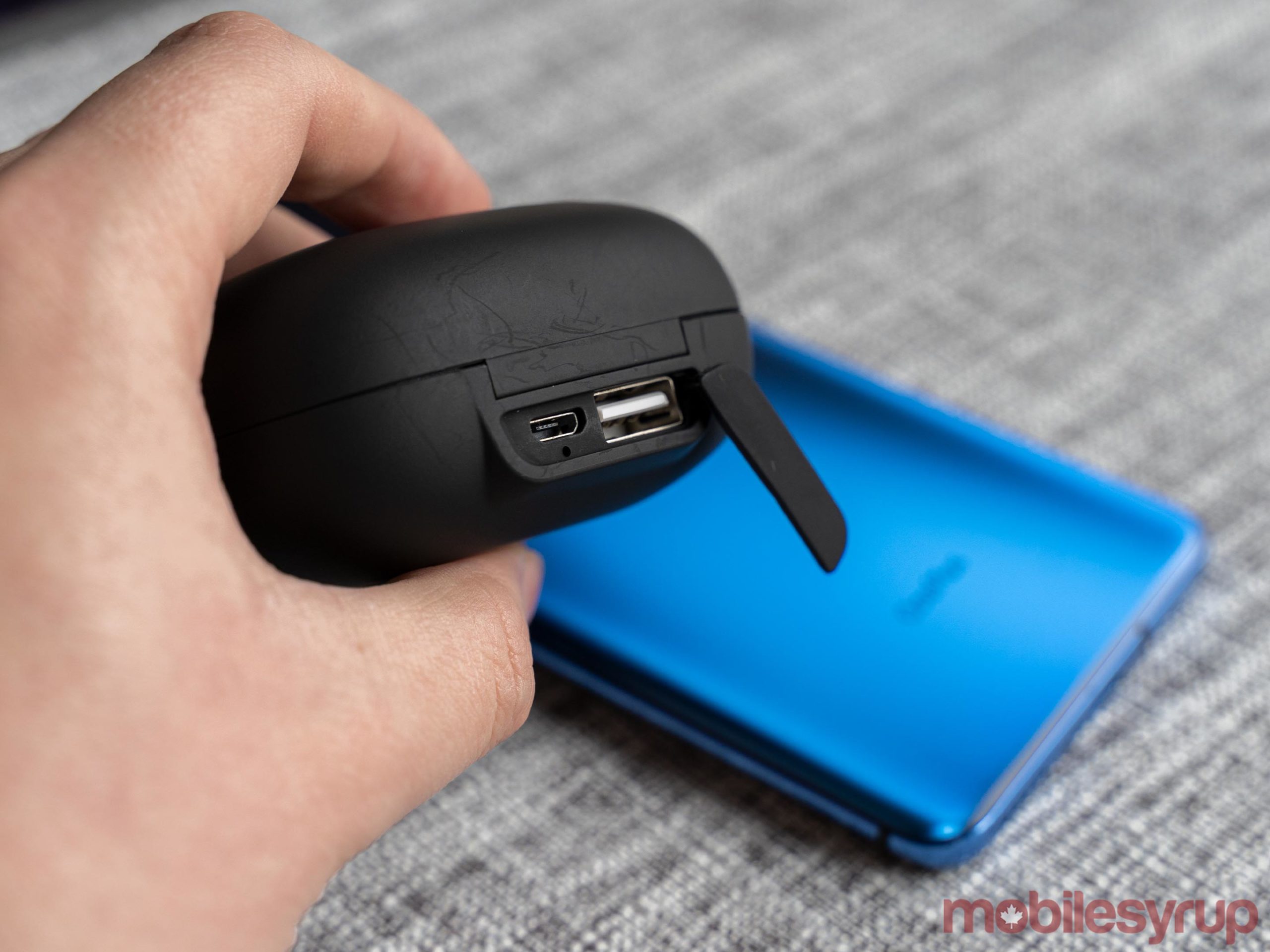 They also take about two hours to recharge, which is probably one of Cron’s biggest issues. Aside from the earbuds taking a long time to juice up, the carrying case also takes forever to recharge — about five hours, to be exact. Considering how much power the case holds, I can forgive the long charge time, but it’d be nice if there was some level of quick charging included. 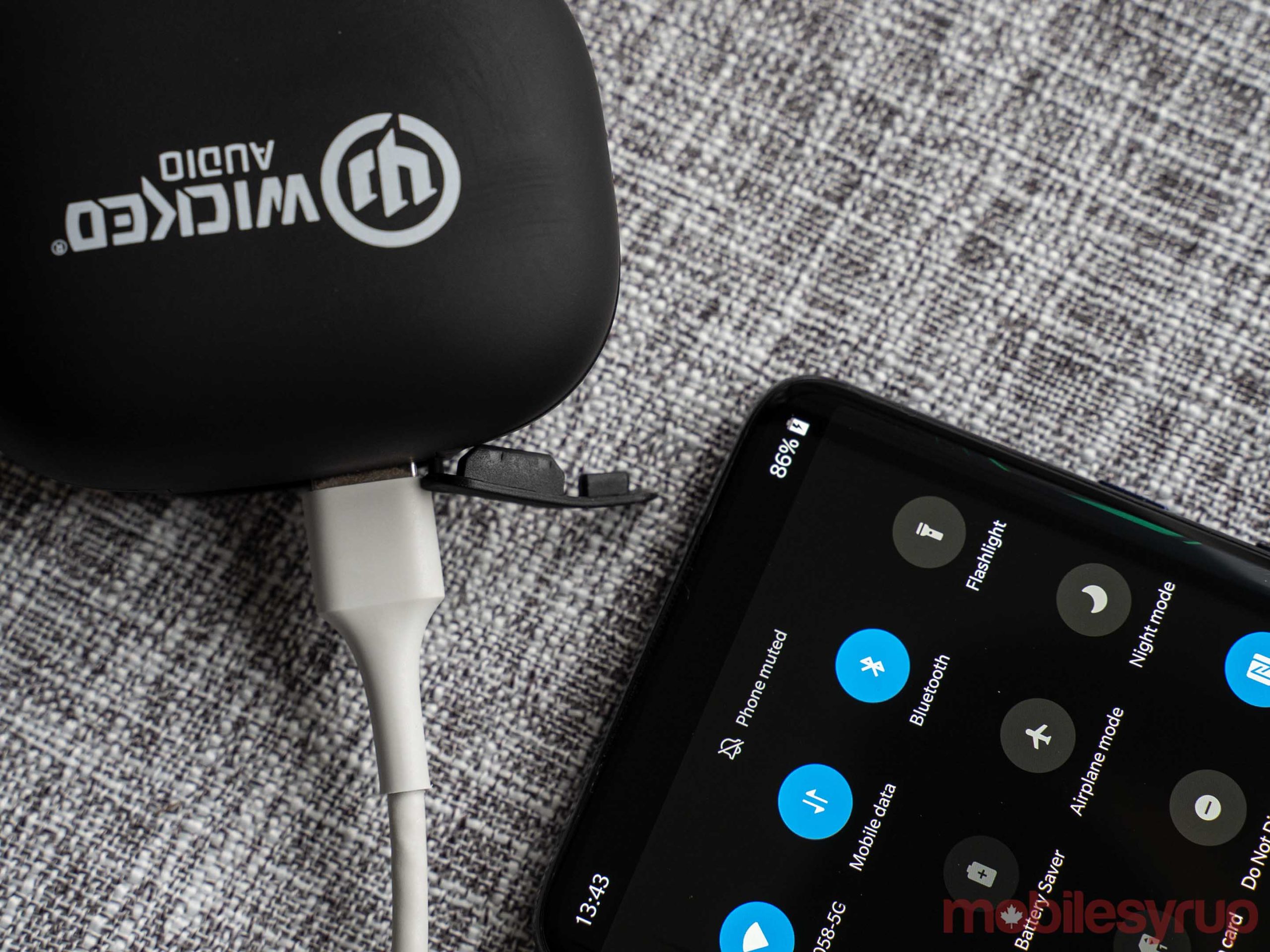 The case does support Qi wireless charging, which is convenient, but also rather slow. Annoyingly, the Cron case doesn’t have an easy way to tell what level the case battery is at. The single LED light on the back of the case flashes orange when charging and turns solid when fully charged.

However, the LED also flashes orange when charging the buds, so it can be difficult to tell what’s actually happening when it comes to charging. I’d prefer if the Crons offered a set of LEDs that could give a rough idea of the battery level.

One other drawback is the case is bulky due to the large battery. It’s not heavy, just big and awkward. 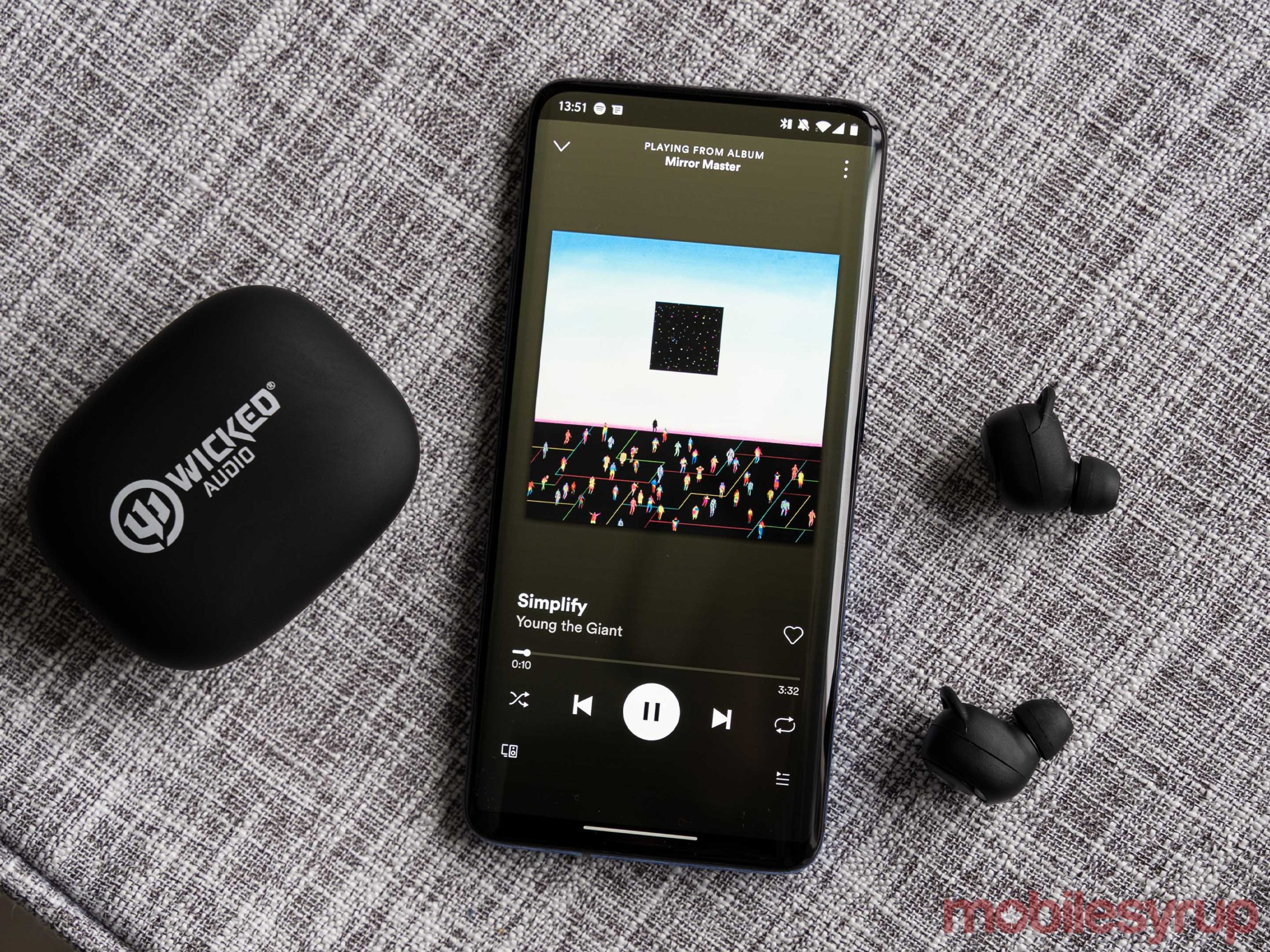 Another important metric for true wireless earbuds is connection quality. Most wireless buds like this daisy-chain the buds together. In other words, one bud connects to the phone and the other connects to the first bud. Some other wireless earbuds I’ve tried had connection issues, either from bud to phone or bud to bud. The Crons did not — my music never stuttered while walking with my phone in my pocket, and one bud never lost connection with the other.

Pairing the buds to my phone was a simple process and subsequent use was a breeze. When you take the Crons out of the charging case, they turn on automatically, connect to each other and then connect to the phone. When the buds successfully connect, they make a ‘whoosh’ sound to let you know they’re ready to go. 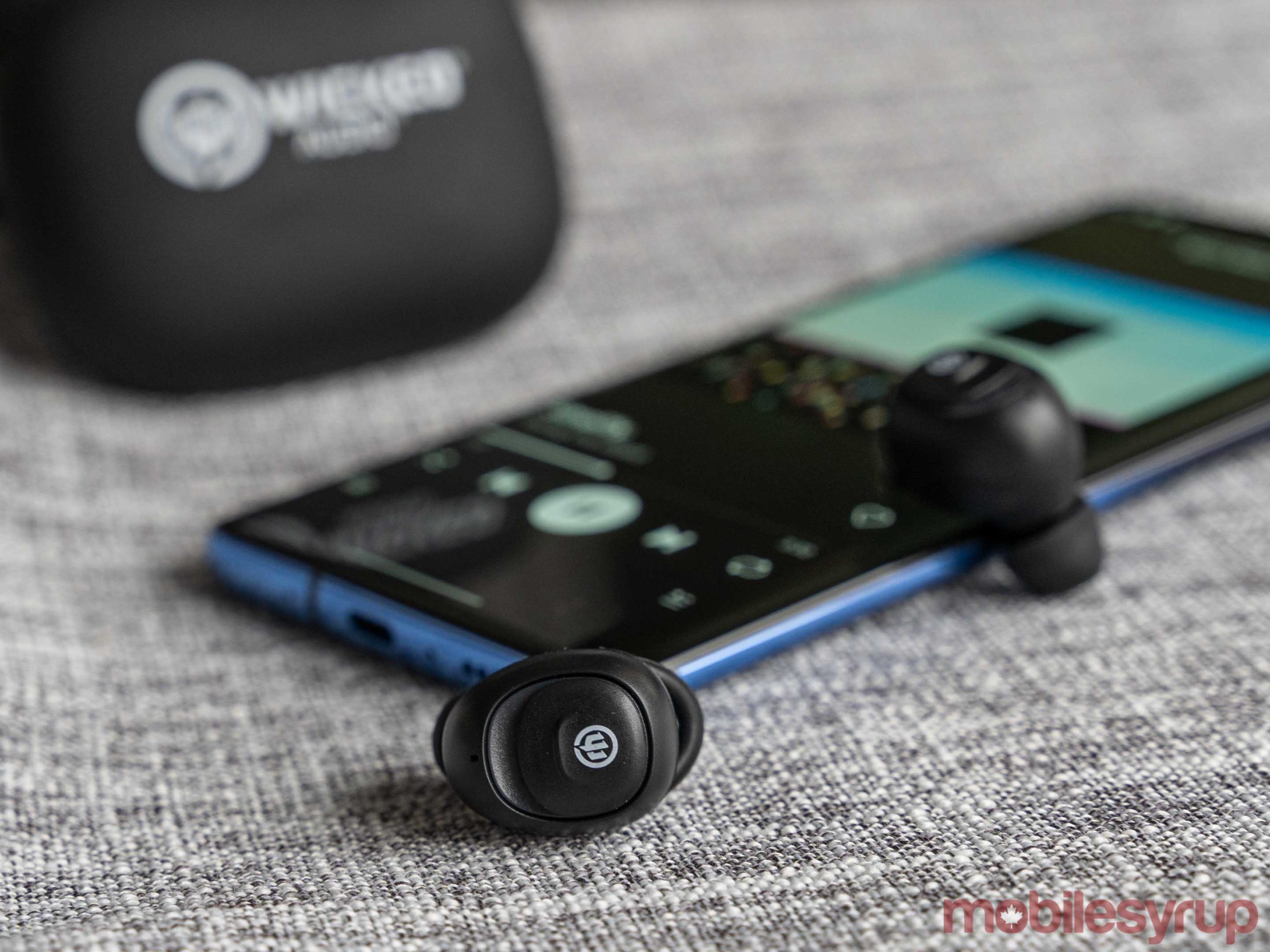 Almost every time, the buds were already making the sound by the time I was placing them in my ears.

Finally, the Crons support a ‘single bud’ mode, which is helpful if you want to use them but don’t want both buds in your ears. For example, I used single bud mode as a makeshift Bluetooth headset when driving. 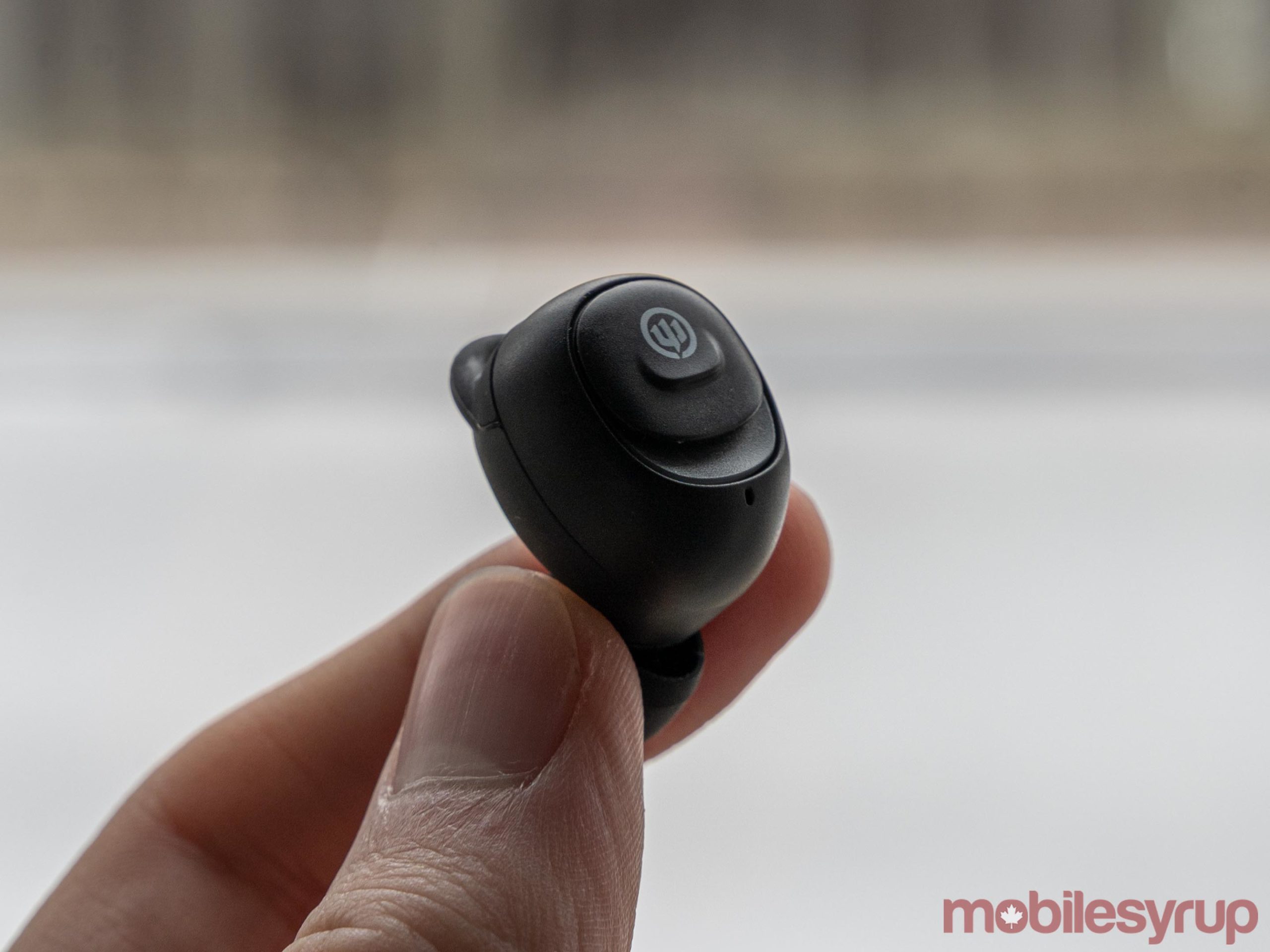 To go back to normal usage, just put the single bud back in the case with the other Cron, then remove them both. 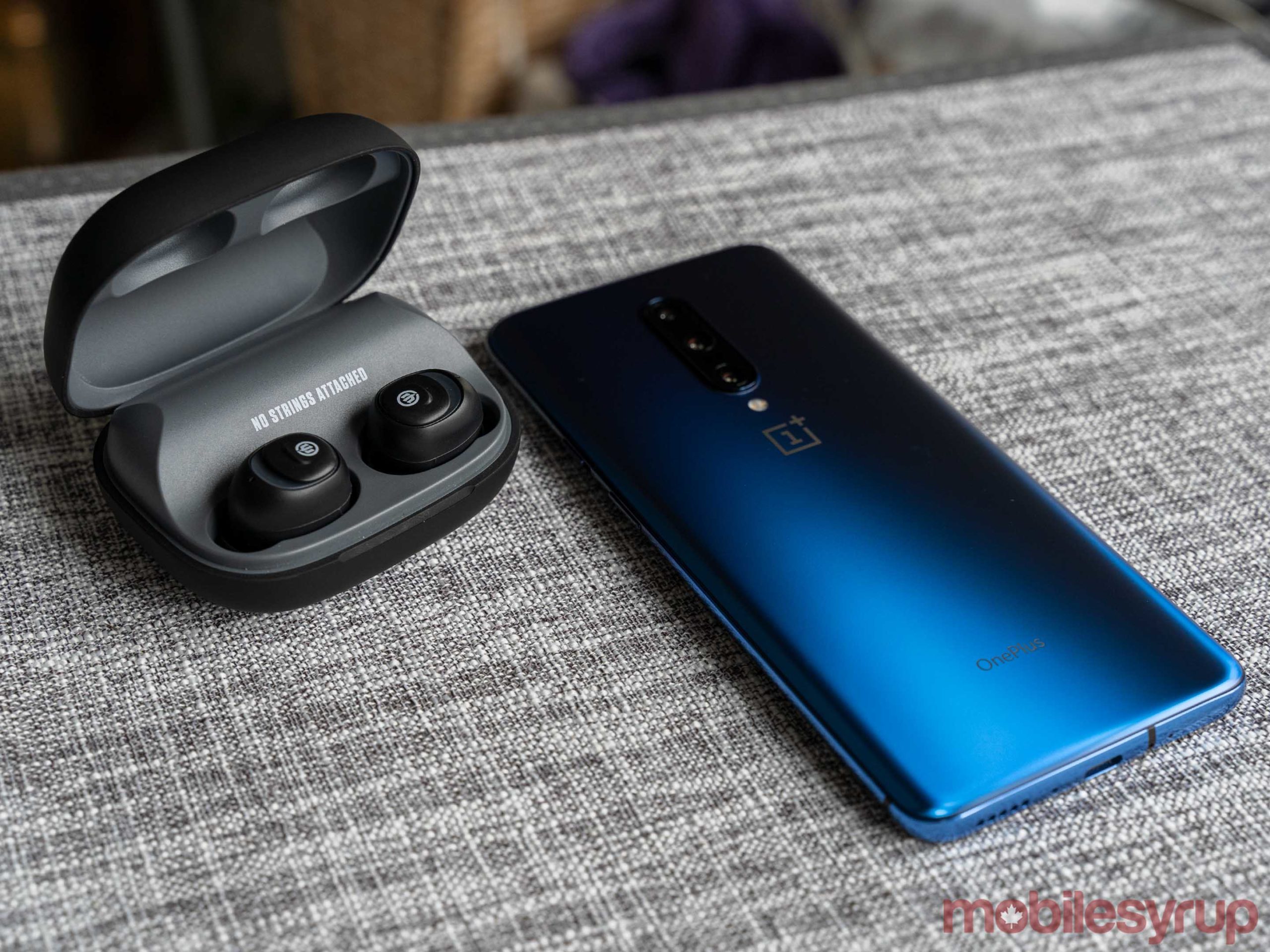 Finally, the Cron earbuds offer decent sound. They’re not the best sounding earbuds I’ve ever used, but for the price and other features, they’re more than fine.

On the hardware side, the Crons sport a 6mm neodymium driver with 105dB sensitivity, 16-ohm impedance and 20-20,000Hz frequency.

In your ear, however, the buds offer a surprising amount of bass and respectable range. For me, I found the earbuds more than capable for listening to music and podcasts while commuting on the train and streetcar. The Crons feature noise isolation, so they block out some sound, but they don’t have full noise cancellation like the AirPods Pro. That said, I didn’t find the typical noise of my commute to be a problem. 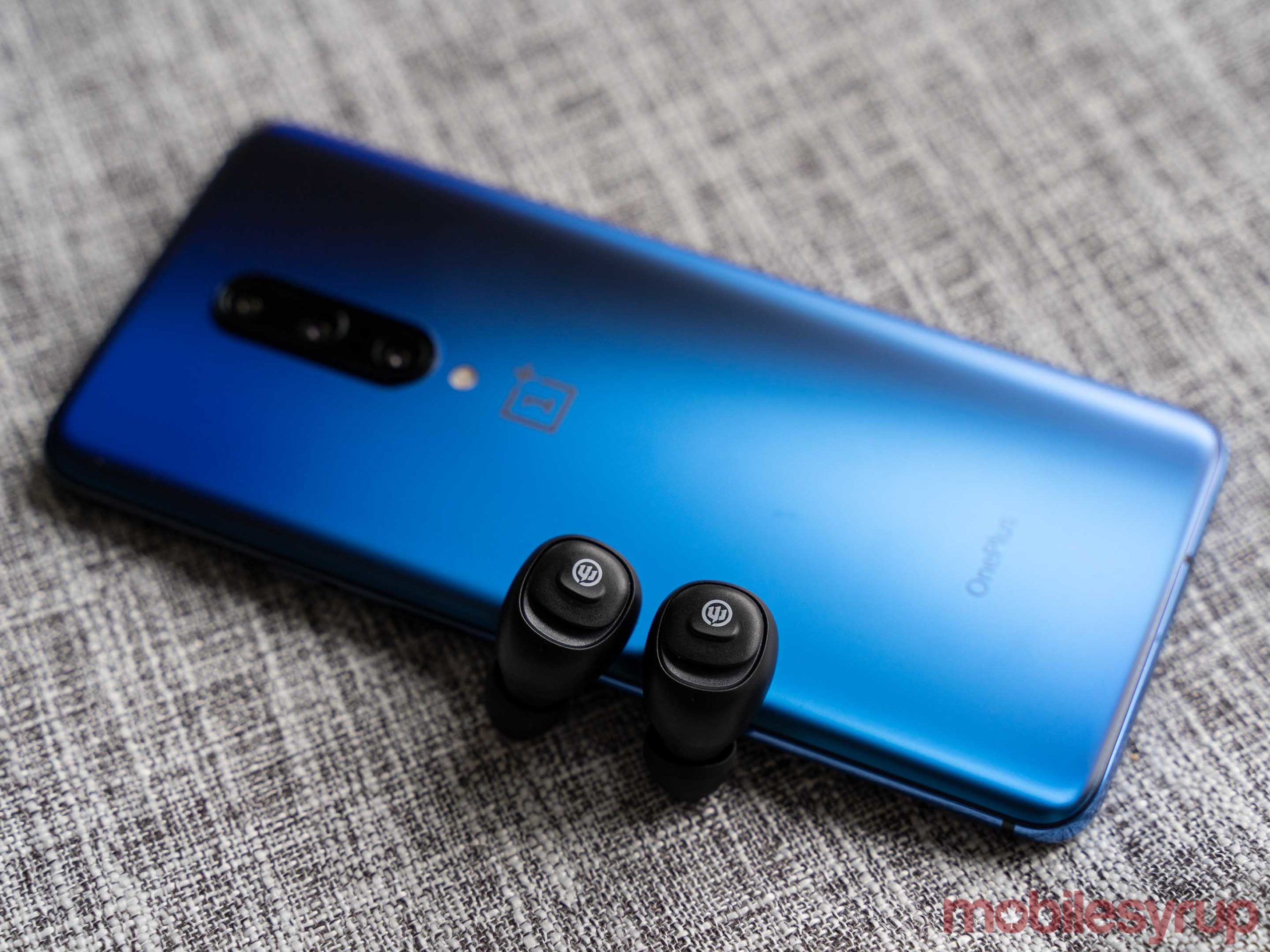 My biggest gripe with the sound quality is a lack of clarity in the sound. Compared to some high-end headphones I use, the Cron seemed noisy and lacked detail. Don’t get me wrong, the Cron still sound okay. But if you want to hear the most in your music and podcasts, you’ll want something more.

It all comes down to money 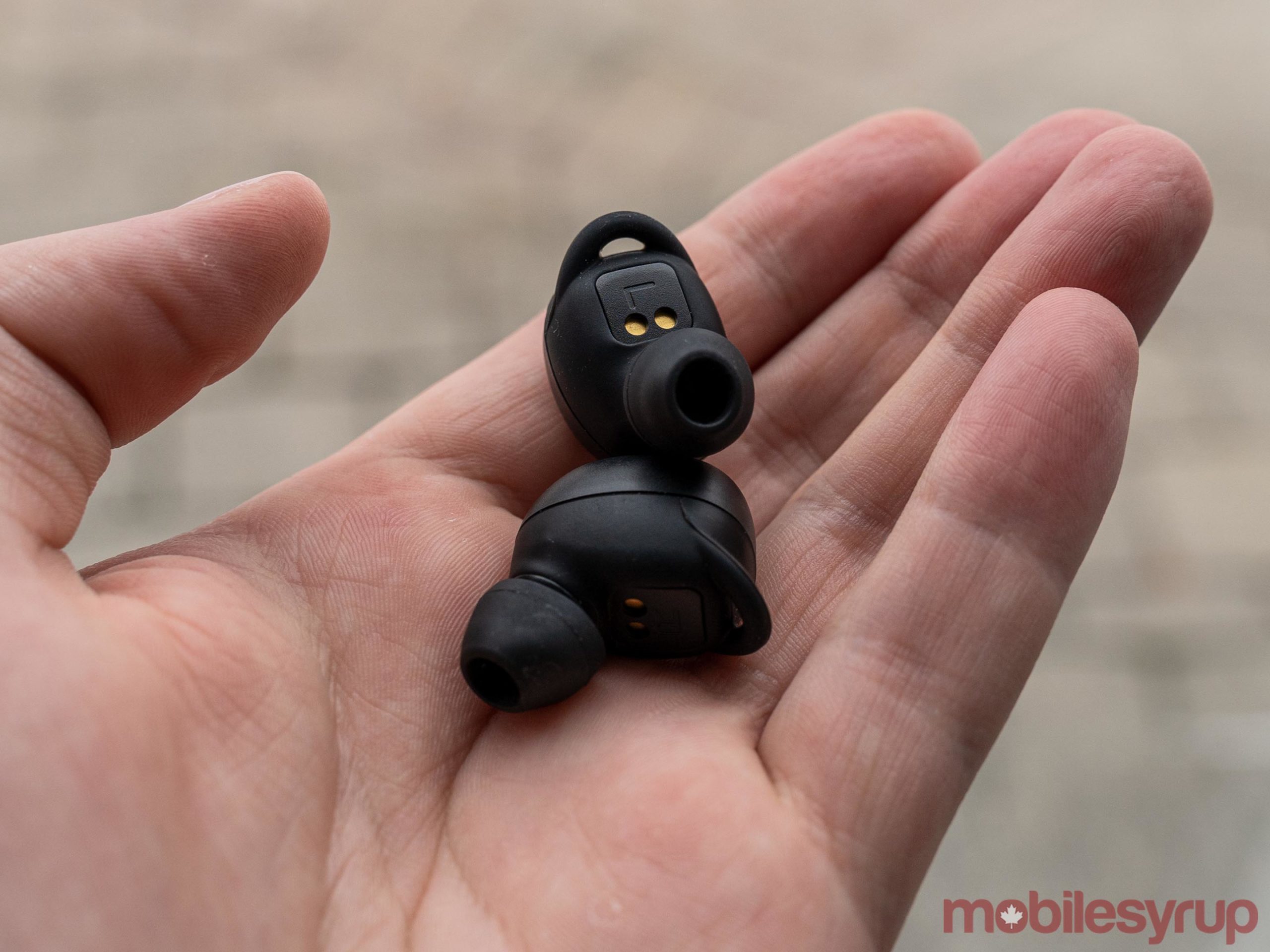 At the end of the day, the Cron offer a lot for $129.99 CAD. Compared to $329 for the AirPods Pro or even $269 for the AirPods with wireless charging, the Cron are significantly less expensive. When you factor in the longer battery life, it’s hard to deny the value in these earbuds.

That said, there are some drawbacks to the Cron. Namely, the earbuds don’t offer active noise cancellation. On top of that, Cron don’t have smart features either. That means no Siri on iOS devices and no Google Assistant on Android. The center button on the Cron lets you answer incoming calls, play/pause music and skip to the next or previous track, and that’s about it.

If you’re looking for earbuds with phenomenal battery life and you don’t want to break the bank, look no further than Cron. However, if you want noise cancellation, high-fidelity sound, or even access to smart features like Siri or Google Assistant, you may want to look elsewhere. 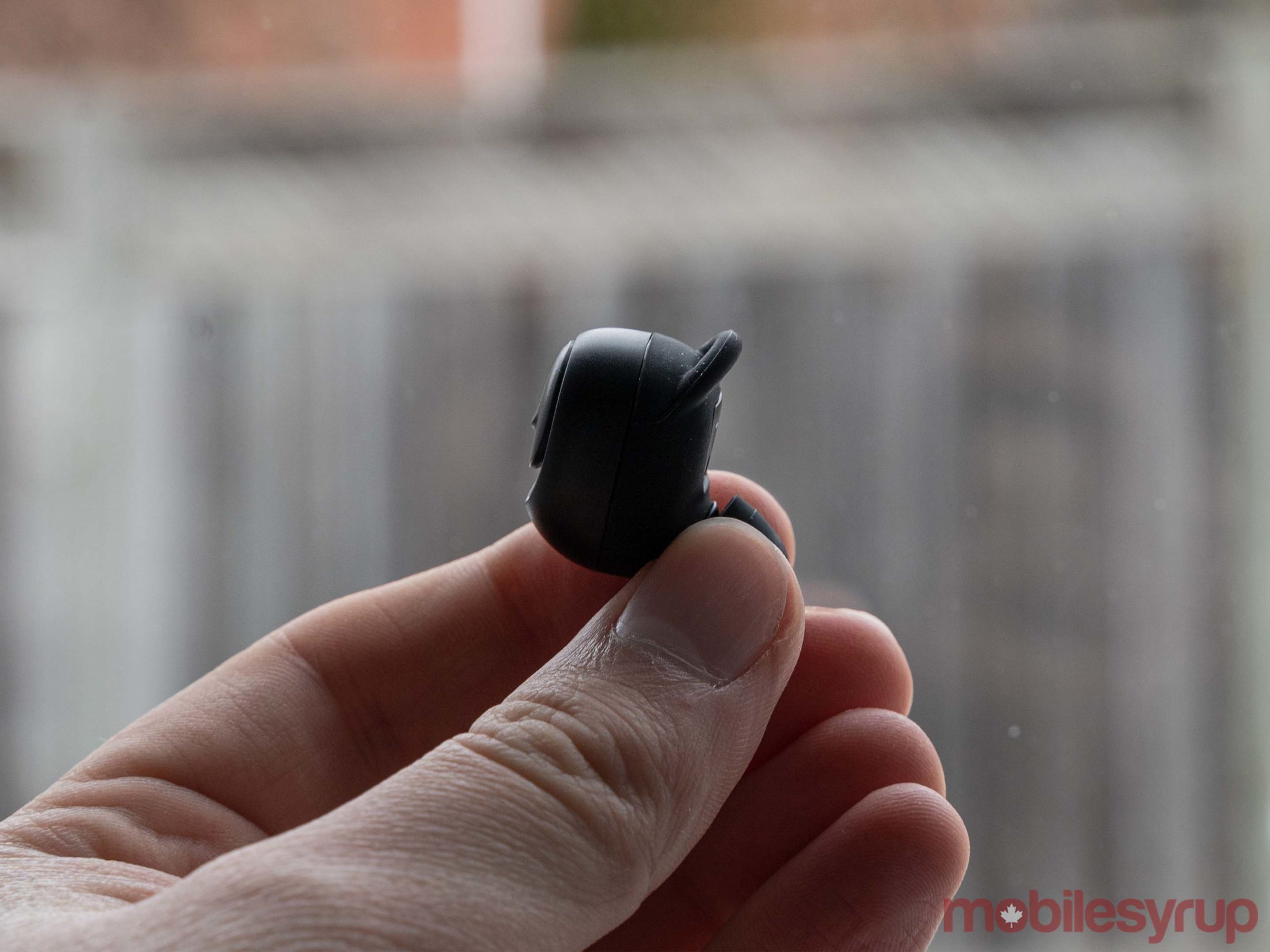 Even if you do decide the Cron is the way to go, you may have a hard time finding them. A Wicked Audio spokesperson confirmed to MobileSyrup the earbuds would retail for $129.99 in Canada but didn’t share where to buy them. Further, Wicked sells several other true wireless earbuds in Canada through Amazon, but Cron currently isn’t listed on the company’s products page. Hopefully they’ll be available there soon.

In the meantime, those interested can purchase the Crons from Wicked Audio’s website, but the pricing is in USD ($99.99 to be exact, which works out to just a few dollars more than the $129.99 Canadian price with the conversion). While not ideal, at least there isn’t significant markup if you want to buy them that way.

Huawei GR5 review: Pretty, but not so nice on the inside

Samsung Galaxy XCover 4 Review: It’s a phone, not a case