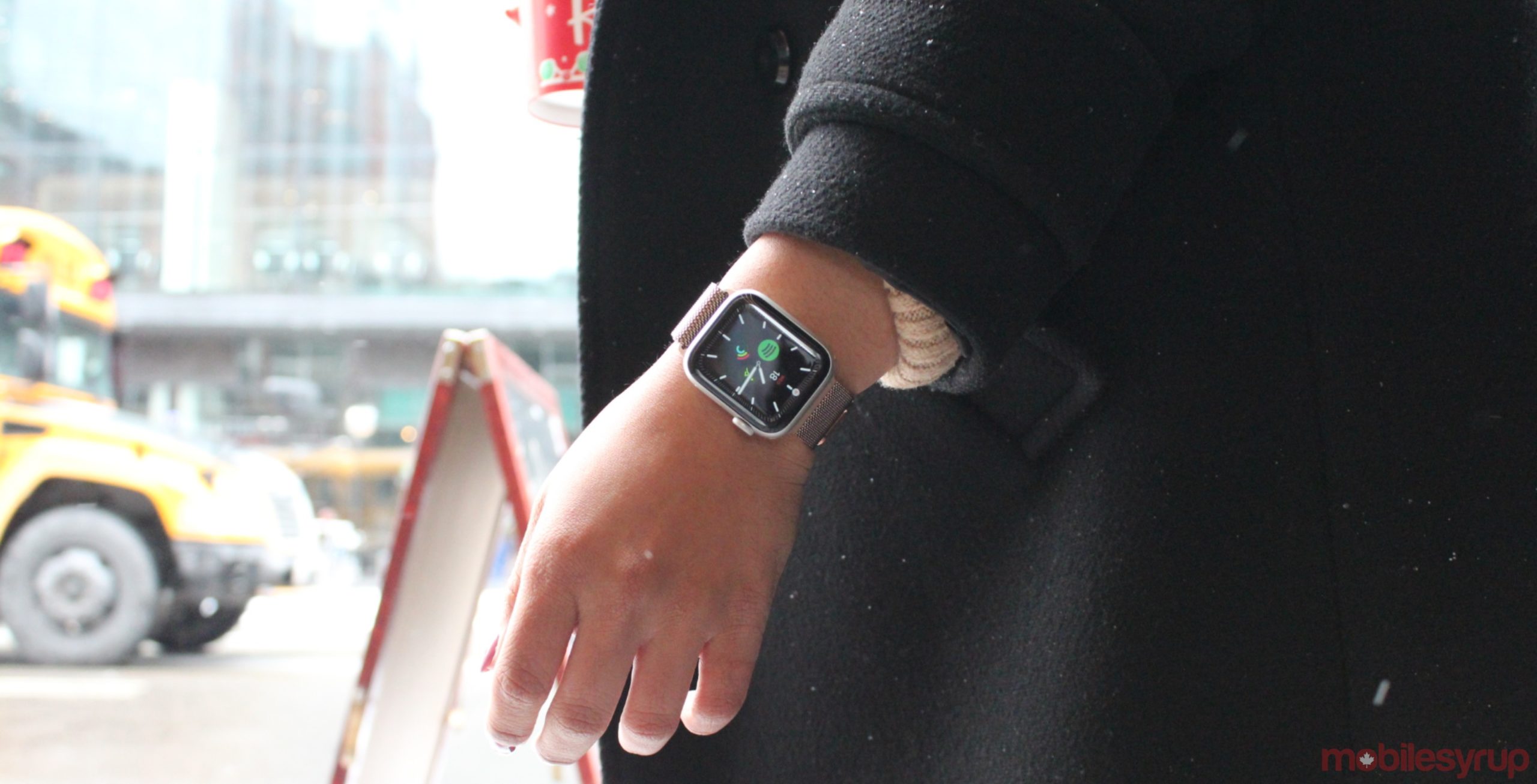 I can’t stress this enough — you need to get an Apple Watch.

For roughly two months, I’ve been sporting the Apple Watch Series 5, and I now I feel like I don’t think I could ever go a day without wearing it.

I know a lot of people who own a smartwatch, and I’ve been considering getting one for a while, but I wasn’t sure how much use and value it would add to my life.

I work out seven days a week, so I’ve always felt getting a smartwatch might be useful because it would allow me to track my exercise habits. The more I researched the Apple Watch though, the more I learned about the other features the wearable offers beyond health.

This isn’t a review, but instead a look at how you can integrate an Apple Watch into your life. For our Apple Watch Series 5 review, click here.

Tailoring the look is helpful

During my time with the excellent wearable, I used the Series 5 silver aluminum case in the 40mm size.

I opted for a more classy, professional band, the Gold Milanese Loop (which costs $119 CAD). I know you’re probably wondering why I decided to mix metals, but I actually think it gave the Apple Watch a unique look.

My daily attire is business casual, and I wanted to make sure I had a watch that could match with most of my wardrobe. 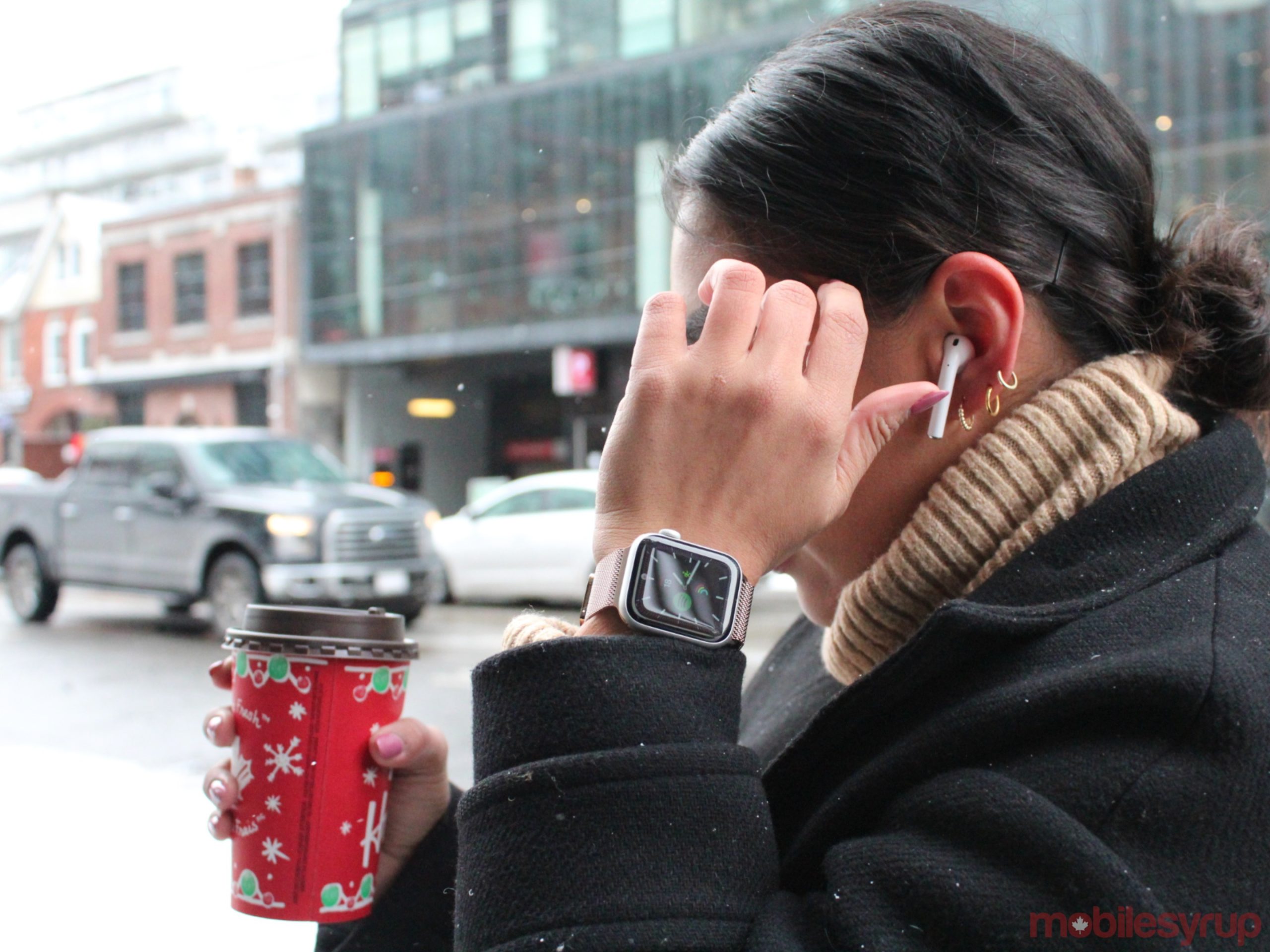 First, I should note though that this specific band isn’t perfect for when you’re working out. It’s not a sport band, but I was lazy, and I didn’t want to keep switching bands. I sweat a lot, and at times I could feel the band loosen up because it features a magnetic clasp.

Aside from that, I think Apple did a great job of allowing the user to style their watch to their preference and lifestyle. I love how many options there are and that switching bands is really easy to do.

Some bands are more affordable than others, but I would recommend getting something you know will go with your wardrobe on a daily basis.

As soon as I connected the Watch to my iPhone, I wanted to start understanding how the Health and Activity app worked.

Every week, the user is able to set their target goal in terms of how many calories they want to lose. I decided to set my target at 500, just to understand how the Watch worked initially. I later increased that to 650 calories.

There are two other markers in the Activity app that indicate your performance throughout the day. The first is ‘Stand’ and the second is ‘Exercise.’ The former is calculated by how much you stand over 12-hours of the day, while the latter calculates the number of minutes you workout. 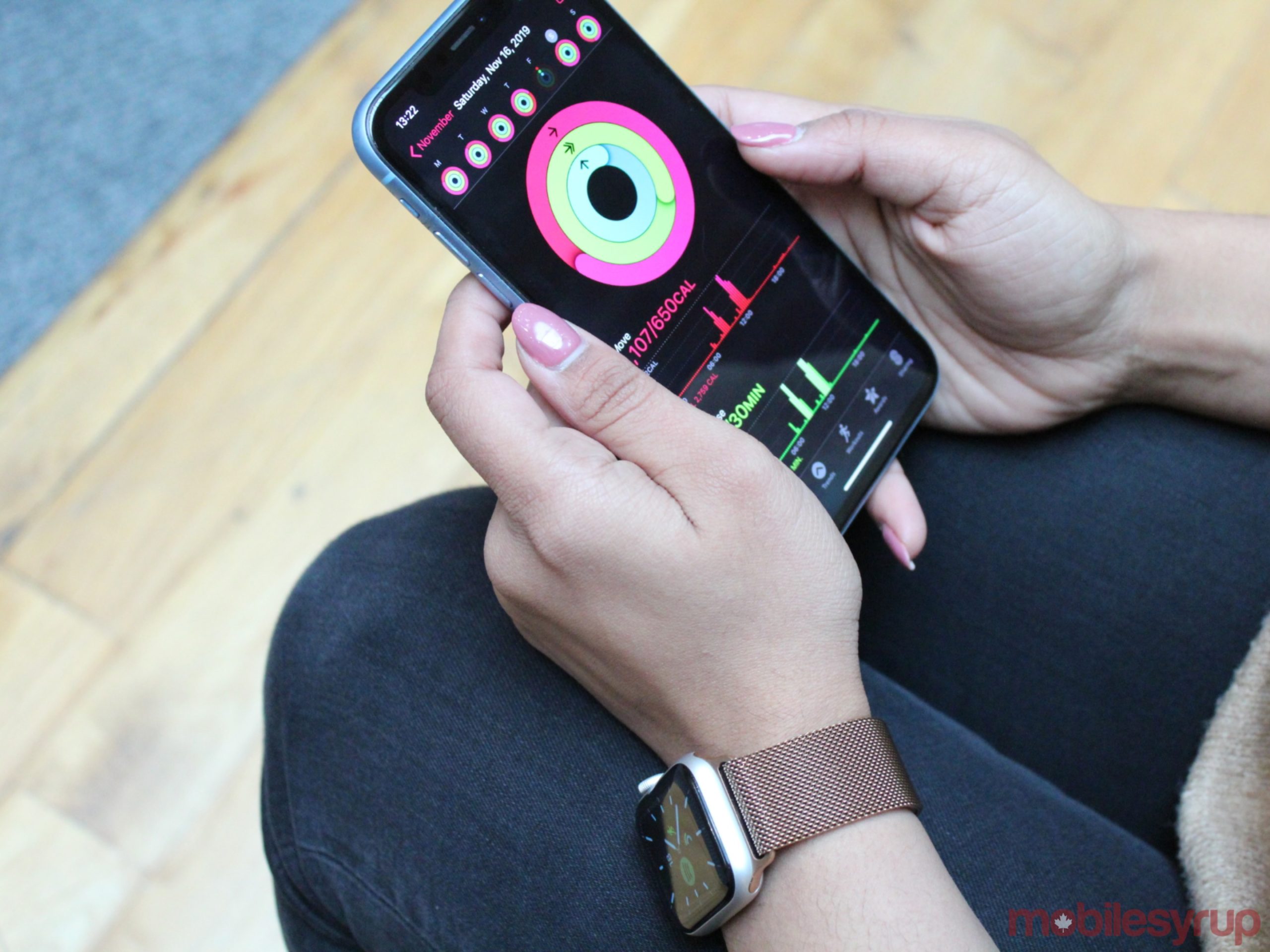 This was my favourite feature of the Watch. Immediately after I got the wearable, a friend of mine asked to do an Apple Watch fitness challenge. Essentially, the Watch lets you compete with other people who are in your contact list who also have a Watch. Every activity you perform adds points to your shared profile — the winner has the most points at the end of the challenge.

The Apple Watch creatively presents users with badges and medals too. Even if you lost against a friend, you still get a medal. Other medals include breaking your own record on the number of calories you may lose, or even just working out every day for 30-minutes.

These medals are incredibly encouraging. Apple also stores all your medals in a list that you can go back to and check out, which is a great way to really see your fitness accomplishments.

If you are not a very active person, the Apple Watch might also help motivate you to be active. It’s really fun to see when you do well and when you achieve something you didn’t think you could do.

In November, I decided to participate in a workout challenge at the spin studio I go to. The Ride Cycle Club, located on Ossington in downtown Toronto, had a special challenge that required riders to complete several tasks within the month.

I was also travelling a lot in November for work, so I had to be smart about completing the challenge and also being healthy and safe at the same time. 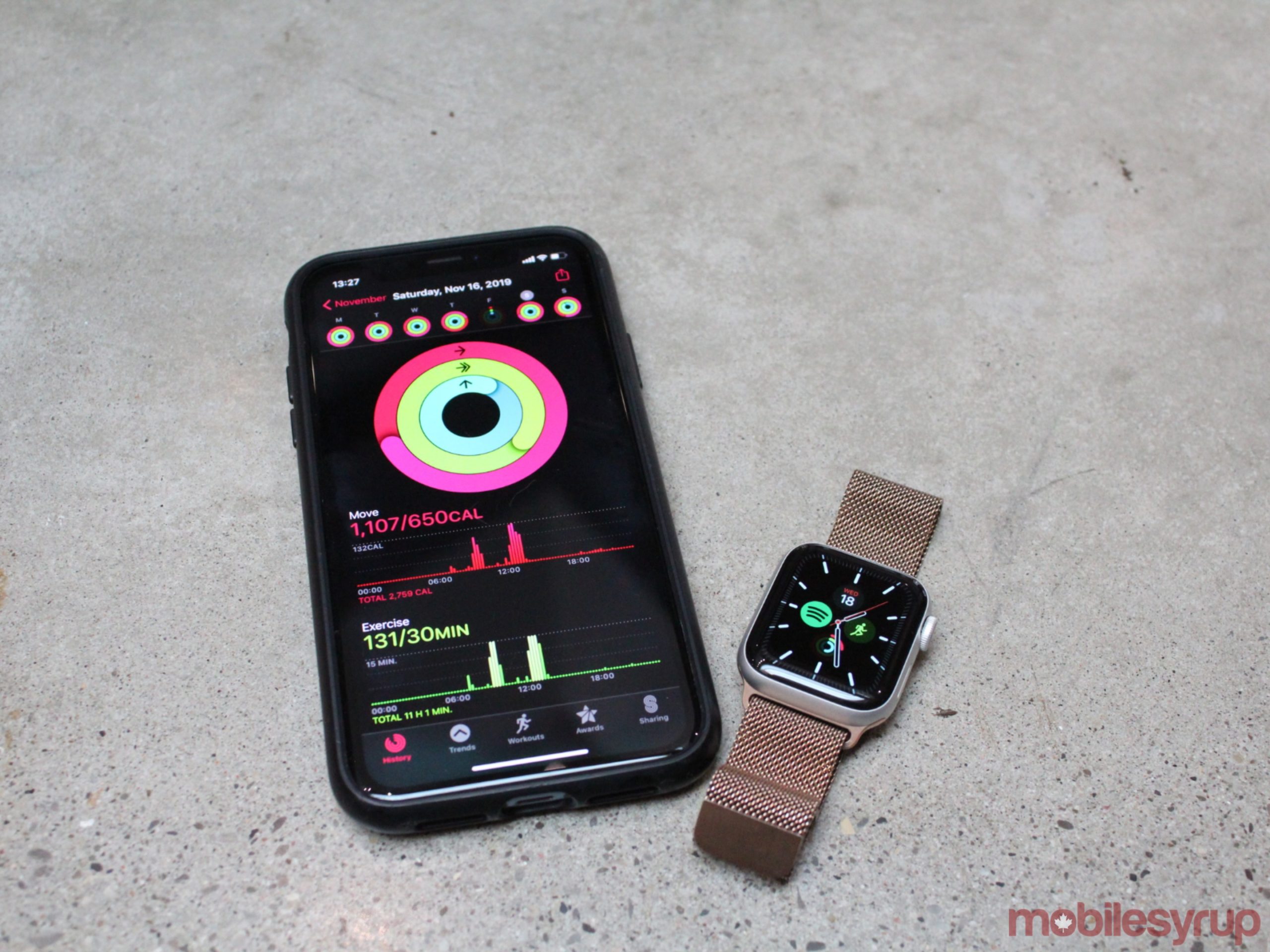 Between September and November, I saw a massive change in my performance. For example, my performance was the best when I didn’t drink any alcohol the night before, when I got enough sleep and when I wasn’t stressed.

The days between November 16th and 24th were my most stressful days. I had a lot of deadlines and those were the times when I was travelling. I noticed a huge shift in my performance as well. One weekend I flew back from Montreal and after landing at 7am, I headed directly to the studio to workout and I noticed that I barely lost any calories and that my performance was weak.

Being able to track my calories, my heart rate, and how I perform has helped me tailor other habits in my life as well. I know that if I don’t sleep enough, I won’t be strong to go work out. These may seem like things people should know without having to be reminded, but it was nice to see actual performance results and understand why they weren’t as good as they could have been.

Buyer beware, though — you may get addicted to getting these work out details and if you forget your Watch on the day of a workout, you’ll miss out. I will admit, I was very upset on a handful of occasions when I forgot my device.

As I researched more about the Watch, I learned about a lot of features that eased my irrational fear of dying alone and not being found.

Ok, I know you’re probably wondering where that came from. Hear me out for a second.

When I was living alone in Ottawa, I always had this irrational fear that I would accidentally fall in my shower, hurt myself and would not be found for at least a couple of days. My friends always joke around and say that I should get a medical necklace for safety precautions.

Well, who is laughing now? Because the Apple Watch has built-in the Fall Detection, I never ever have to worry. Within the Health app, you can set up emergency contact and allergy-related information as well.

Apple told me that if I fell, a notification pops up that asks if I’m actually in need of emergency services or if I’m okay. If you’re not okay, the watch will automatically call emergency services as well as any emergency contacts you’ve added to your list. 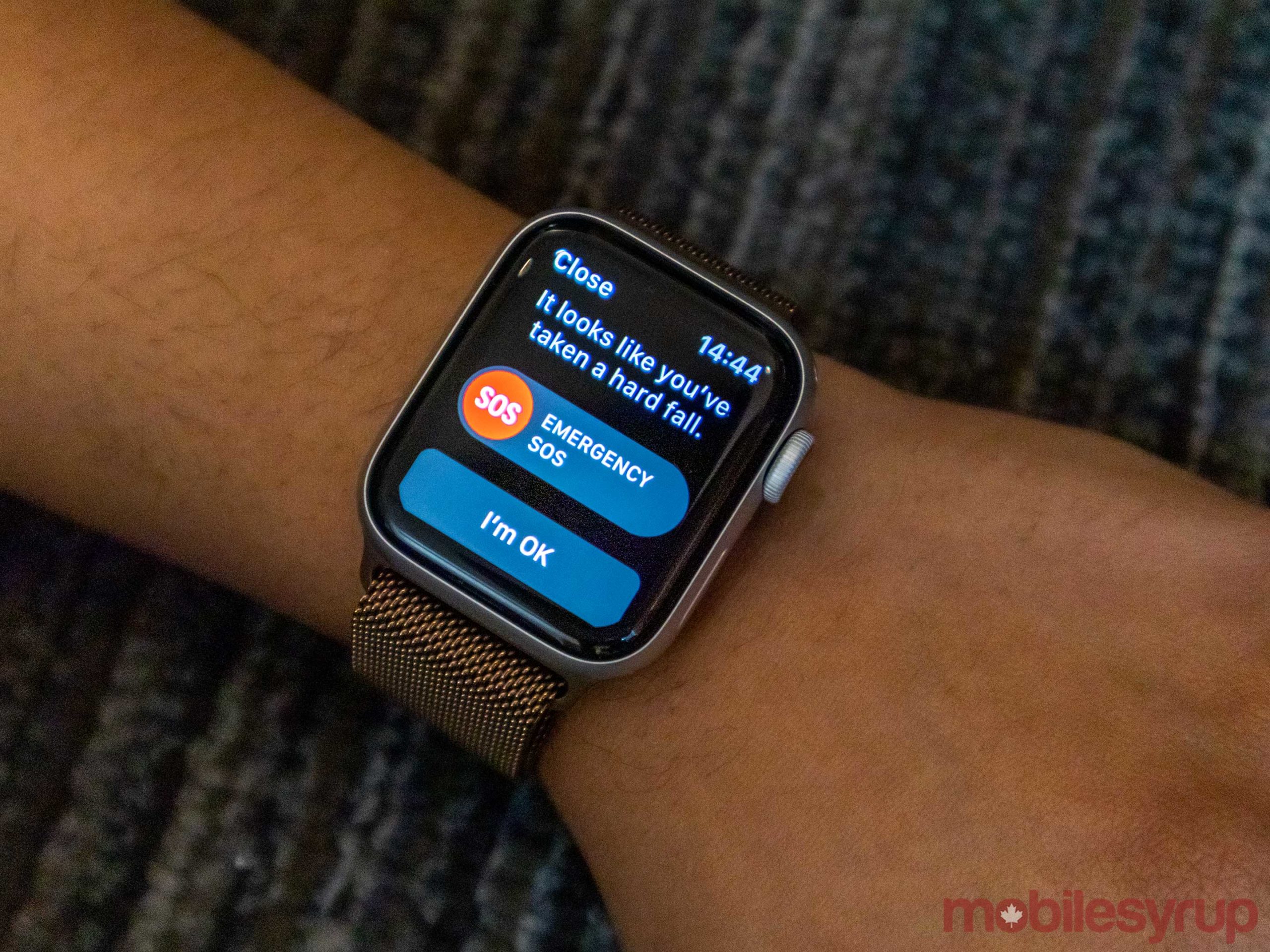 Apple also noted that if you are moved from your location to a hospital nearby, a message is sent to your emergency contacts with the precise location of where you’ve been moved to.

To test this feature, I had one of my coworkers push me a couple of times to set the Fall Detection off and surprisingly it worked out perfectly.

I was also told that now in Series 5 if you are in a situation where you feel your life is in danger, you can press and hold down the crown of the Watch, which will contact emergency services.

As a journalist, my lifeline is my phone. I heavily depend on it to use social media, call sources, take notes and regularly function in my day-to-day life.

While having a Watch doesn’t mean I’m completely off my phone, I noticed that I was reaching for my device a lot less.

Every Watch series is connected to your phone even if it doesn’t have cellular connectivity. That means that if you get a text or notification from other platforms, you’ll get the notification on your Watch as well.

I absolutely loved this aspect of the wearable. If I received a text message, email or notification, I would quickly see what it was on my Watch and move on with whatever I was doing. I found myself to be far less distracted.

After completing whatever I was doing, I would go back to my phone and reply to text messages, or to anything pending.

Overall, I’d say my experience with this smartwatch has been nothing but positive and I’m so happy that it is part of my life. On the Apple site, you are able to purchase the Series 3 starting at $259 and the Series 5 starting at $529.