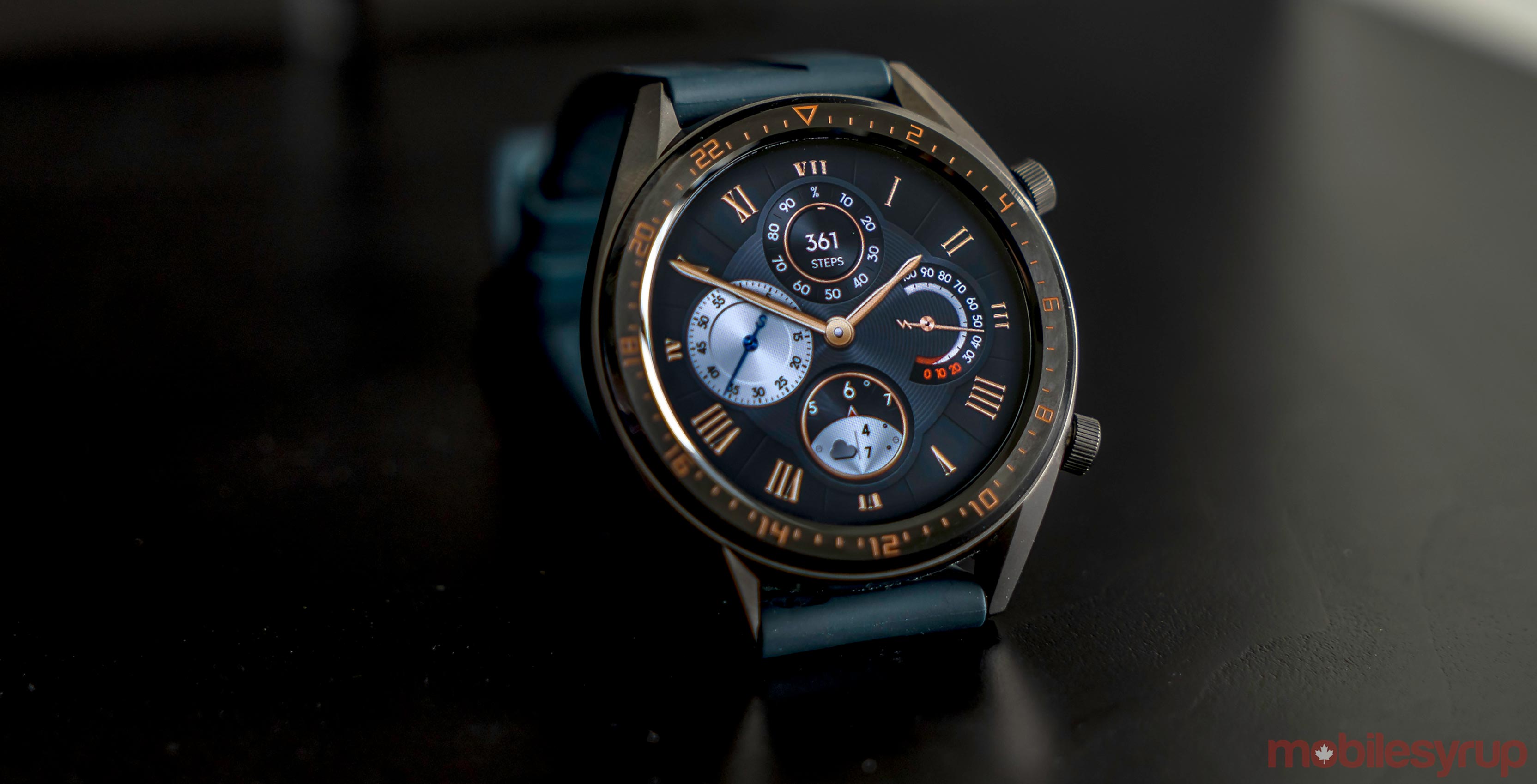 It feels like a watch, looks like a watch, but is the Huawei Watch GT a real smartwatch? It’s the question that loomed over the device throughout my time with it.

Off the bat, Huawei wants users to make both a sacrifice and a commitment with its latest wearable: know that you’re not getting any third-party apps, but trust that you will get a solid first-party experience.

It’s a lot to ask for when there are other smartwatches out there, and that might explain why the company was giving them away when it launched the P30 Pro in Canada. Having worn and used the watch for over a month, it’s a tough call on how effective it will be longer-term. 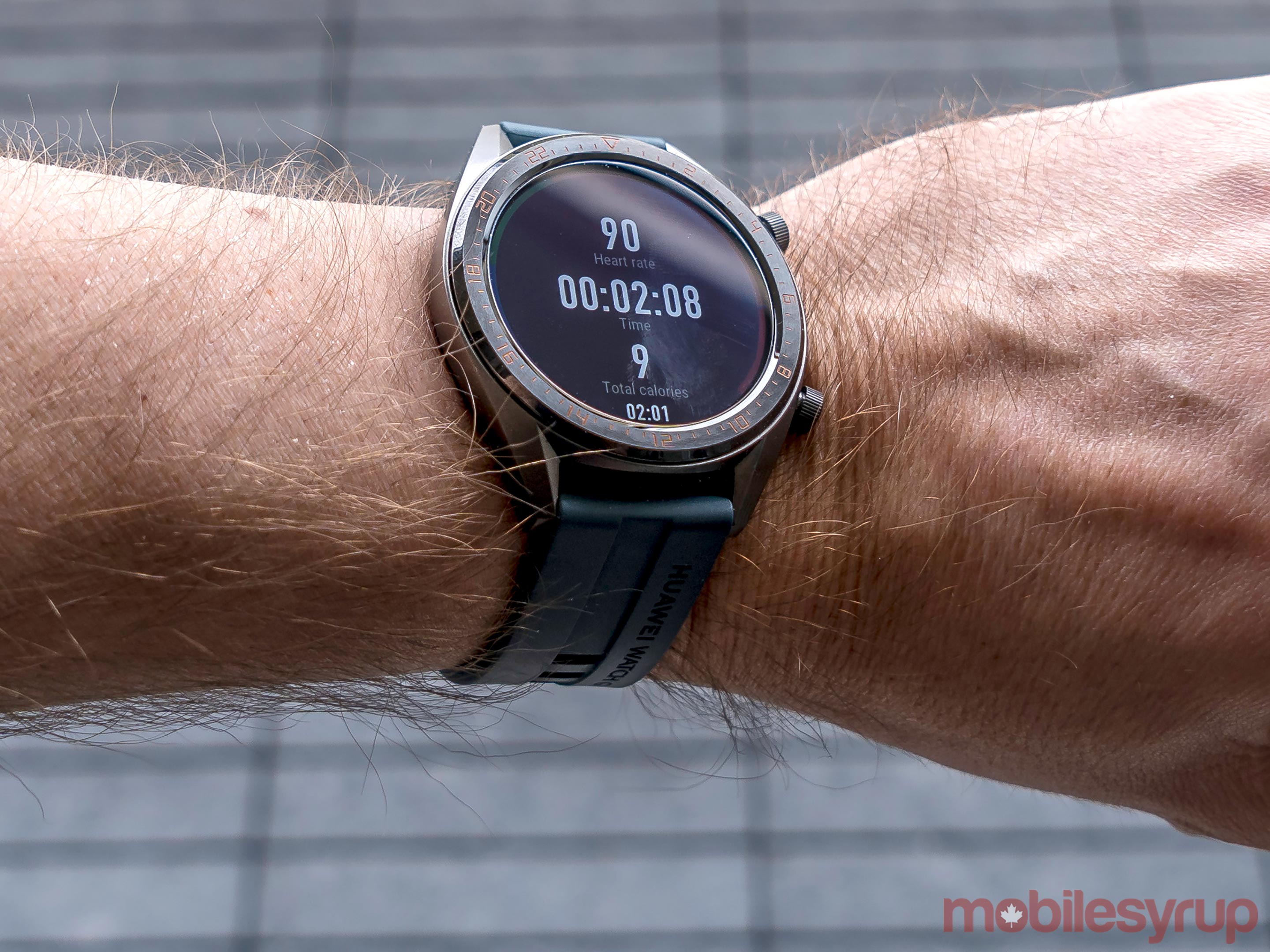 By going with its own LiteOS platform, Huawei abandoned Google’s Wear OS, and all the compatible apps along with it. The decision was a curious one, considering Wear OS competition is relatively light, but also understandable because of that platform’s lack of traction.

The move carries both positive and negative consequences. On the one hand, cutting down on software dramatically improves battery life. On the other, it limits the usability of the watch in ways that would make it ‘smart.’ Hence, there’s a constant trade-off here, which is why I suggest you read through this review to gauge whether or not it’s what you’re looking for.

There are two variants; one with a black stainless steel frame, and the other silver stainless steel. My unit’s strap is officially called black, though it’s more like an emerald black (if that’s a real colour) because of the greenish tinge. They’ve been given “Sport” and “Classic” monikers, respectively, but I haven’t seen that in any Canadian marketing material thus far. 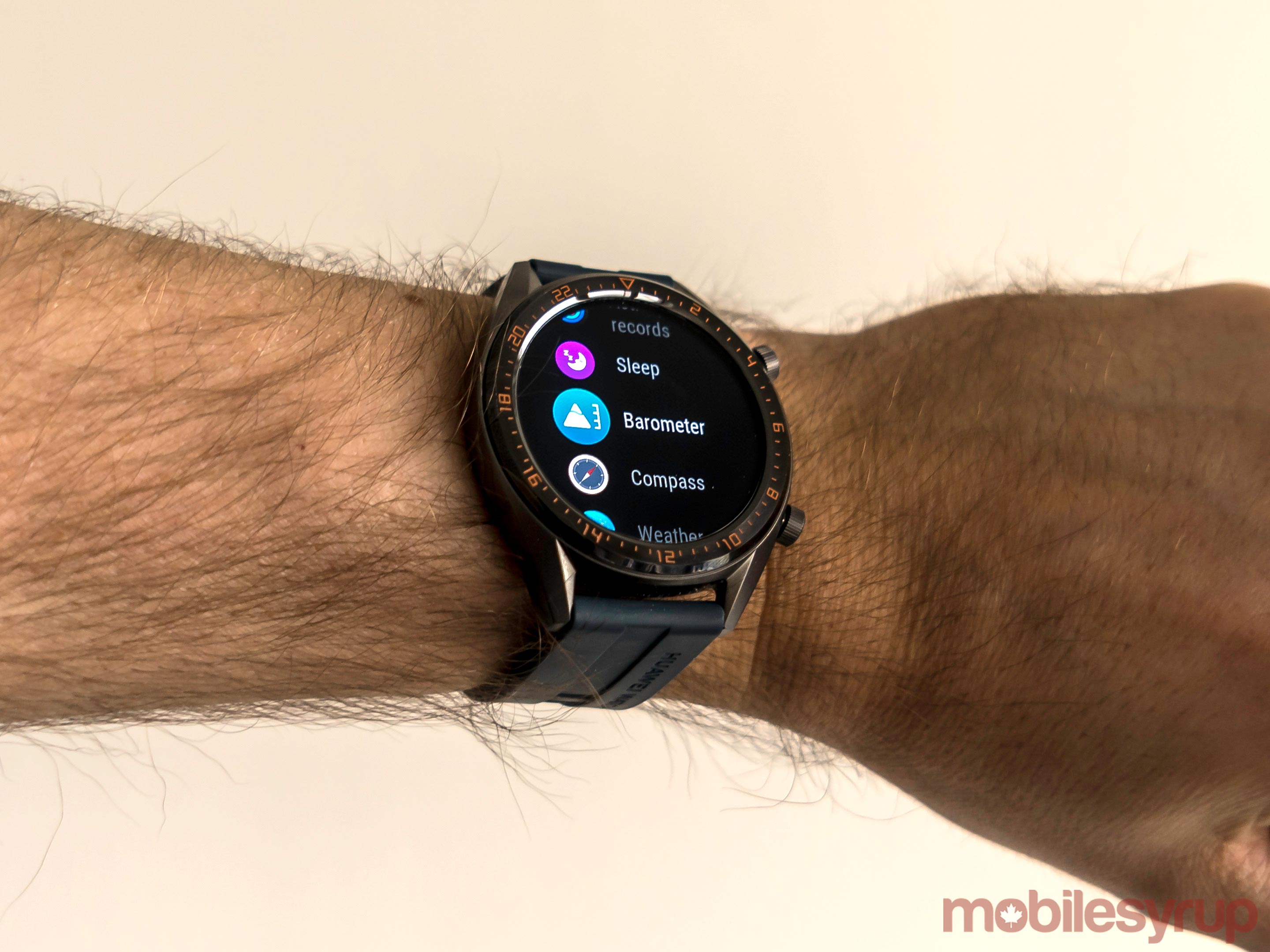 I was taken aback by how many people complimented the Watch GT while I wore it. I never even asked in almost all those cases, friends and acquaintances volunteered their opinions. I tended to agree. The watch is tastefully designed, with a mix of elegance and casual functionality, but also surprising ruggedness.

The 46mm casing, ceramic bezel and glass are all carbon-coated for improved scratch resistance. A 5ATM waterproof rating means it’s perfectly fine in a pool or shower. The rubberized strap looks nice, and the standard lugs mean you can put any other strap you want on it. For example, I put straps I’ve used on the Fitbit Versa and Versa Lite on it, and they were fine.

The 1.39-incg, 454 x 454 pixel resolution, AMOLED display is vibrant and responsive. Both physical buttons, one acting as home, the other as an exercise shortcut, are nice touches, too. An optical heart rate monitor sits underneath on the bottom. Huawei also put a 420mAh battery inside that it rates at lasting up to two weeks per charge. More on that later. 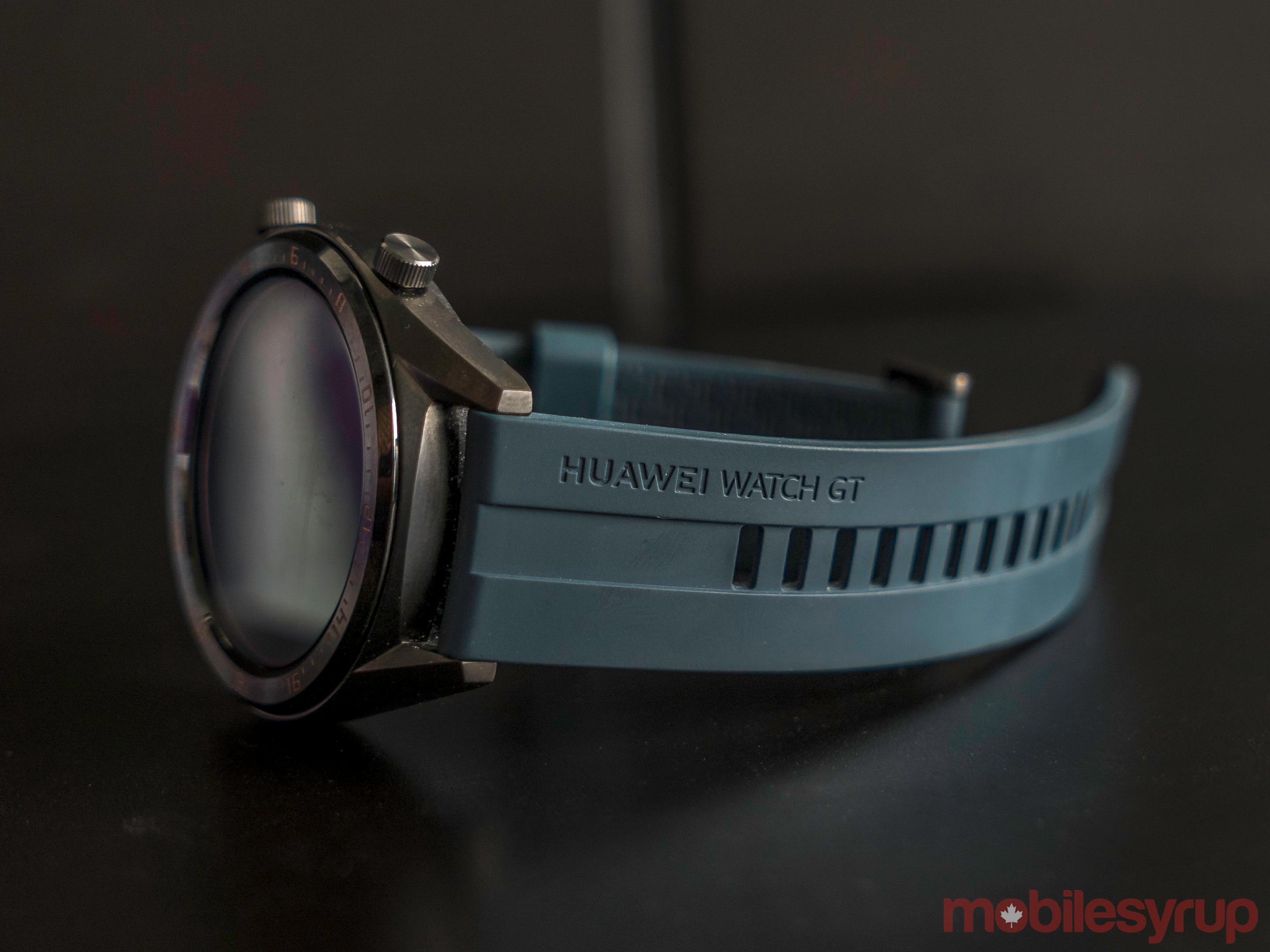 Powered by an ARM Cortex-M4 processor coupled with Huawei’s own LiteOS, the hardware-software marriage here works well. The watch felt fluid and quick to navigate, though I can’t give too many brownie points for the aesthetics. It’s a basic interface, lacking flair, but is fairly easy to use and understand.

Part of the reason why is because you’d be using it in a walled garden of sorts. I had no way of browsing for, or installing third-party apps. There’s no app store, and as far as I’m aware, no way to fork or sideload any in, either.

Even if you wanted to store apps on the Watch GT, you would be stymied by the paltry 128MB of storage. That’s the official figure, but the fine print confirms the actual available storage is lower than that. That means there’s no way to bring in a compatible music app, or even a map to help get around. Strangely, despite supporting Bluetooth, there’s no way to control music playback. I can accept lacking Wi-Fi, given the circumstances, but with music, I would need to pull out my phone or use controls on my headphones. 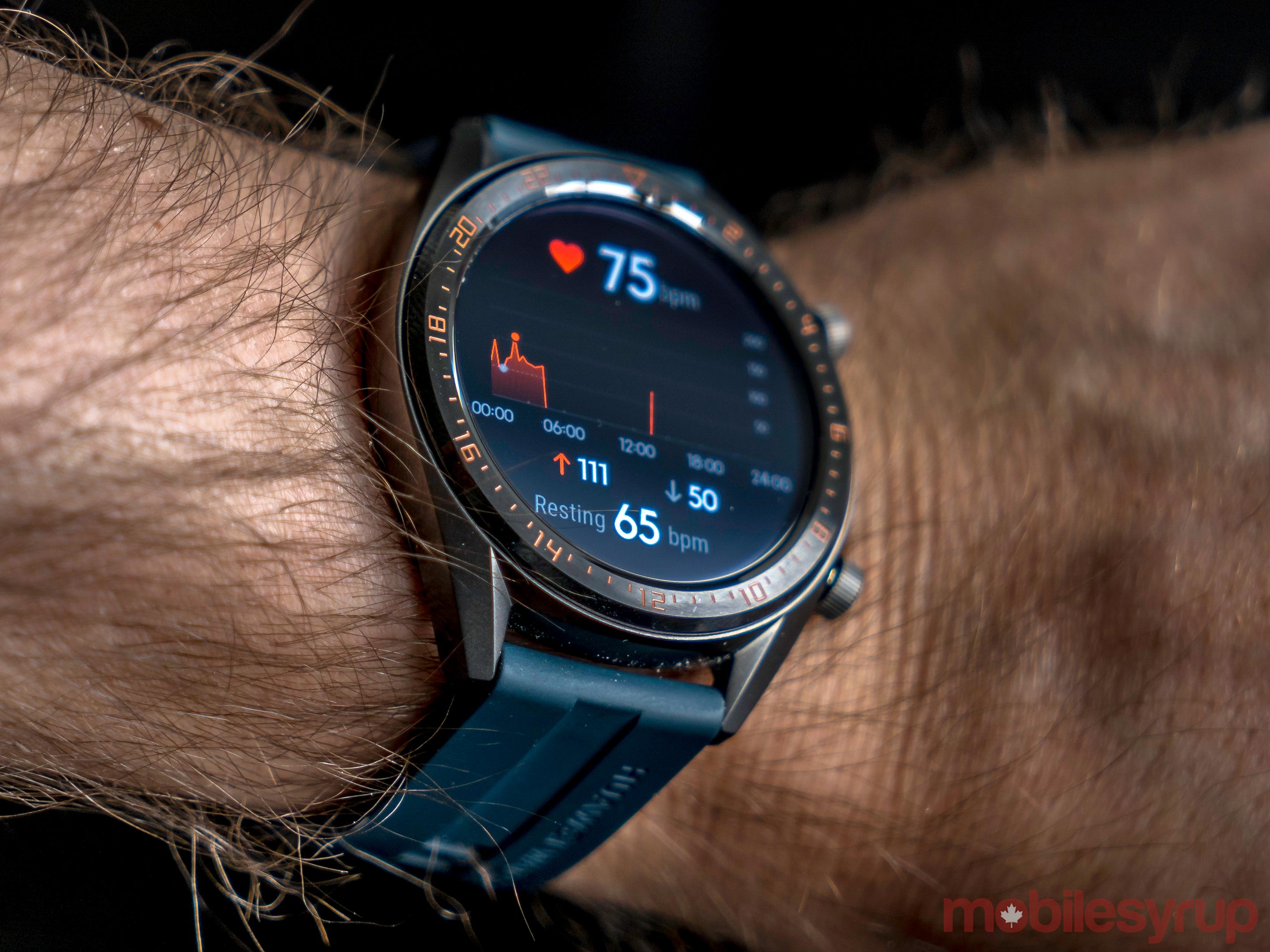 The built-in options are largely activity-focused. Various workouts, like outdoor or indoor running, cycling, walking, swimming and triathlon training are all available. An ‘other’ section tracks any other activity. None of these worked automatically in my testing.

You do get dedicated heart and sleep tracking, plus a find my phone selection for when paired phones are misplaced. Beyond that, there’s a barometer, compass stopwatch, weather, flashlight, timer and alarm.

I mostly tested the Watch GT while paired with a P30 Pro, where there’s a direct link to Huawei’s Health app, but the company says the watch also works with MyFitnessPal and Apple’s HealthKit. 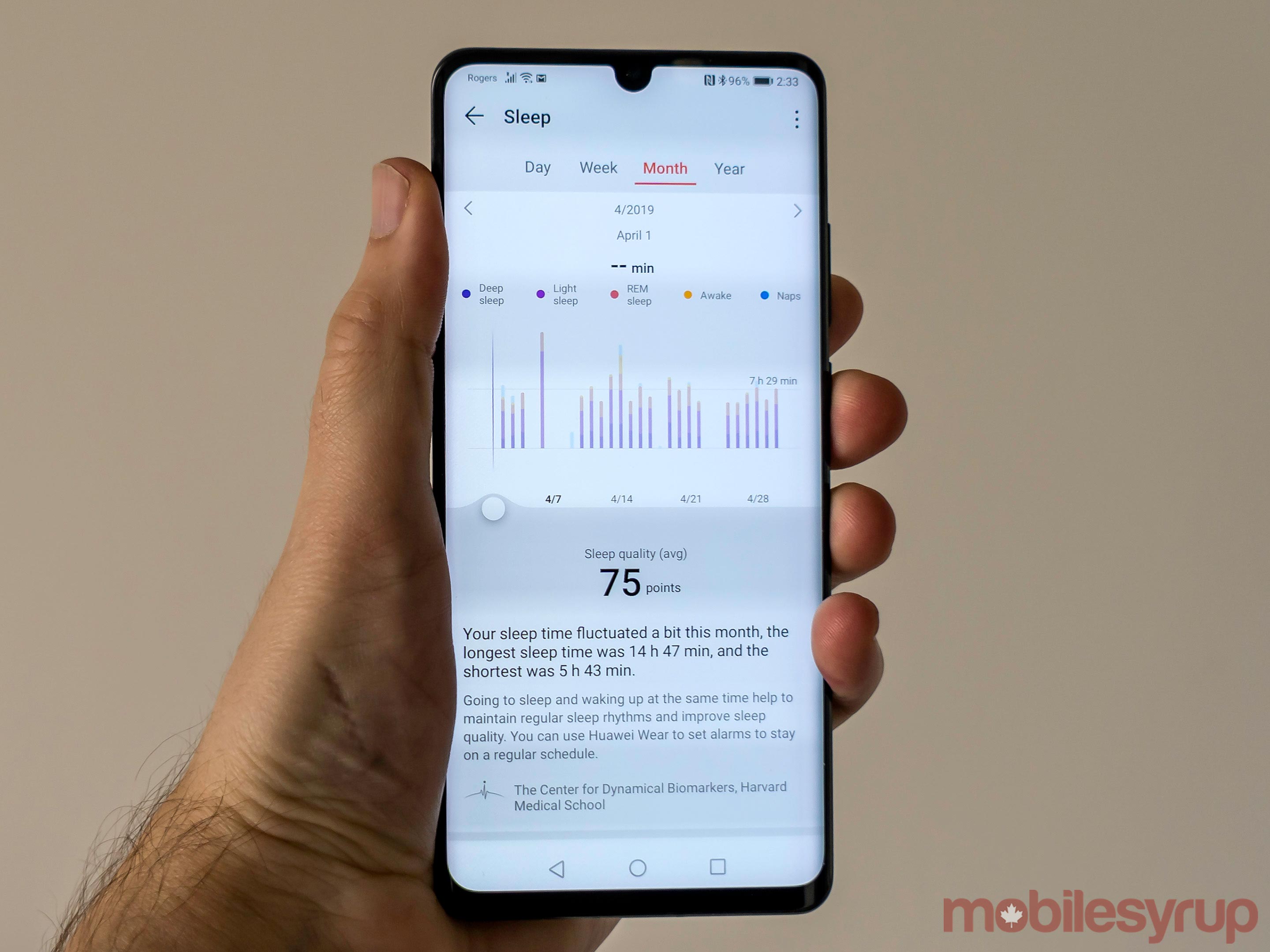 My mistake was not always activating the watch for workouts causing me to lose metric tracking. I would get steps and calories, but not duration, heart rate and data specific to said workout.

Having used other trackers, like Samsung’s Galaxy Watch Active and Fitbit Versa, I’ve been spoiled by more autonomous tracking. When I did activate it for exercise tracking in the gym, it wasn’t bad.

For about 10 days, I wore the Watch GT on one wrist, and the Fitbit Versa Lite on the other. Step counts often differed, by as many as 1,100 steps on one particular day when the Watch GT presented a more conservative total. In none of those days did the Watch GT track more steps than the Versa Lite. 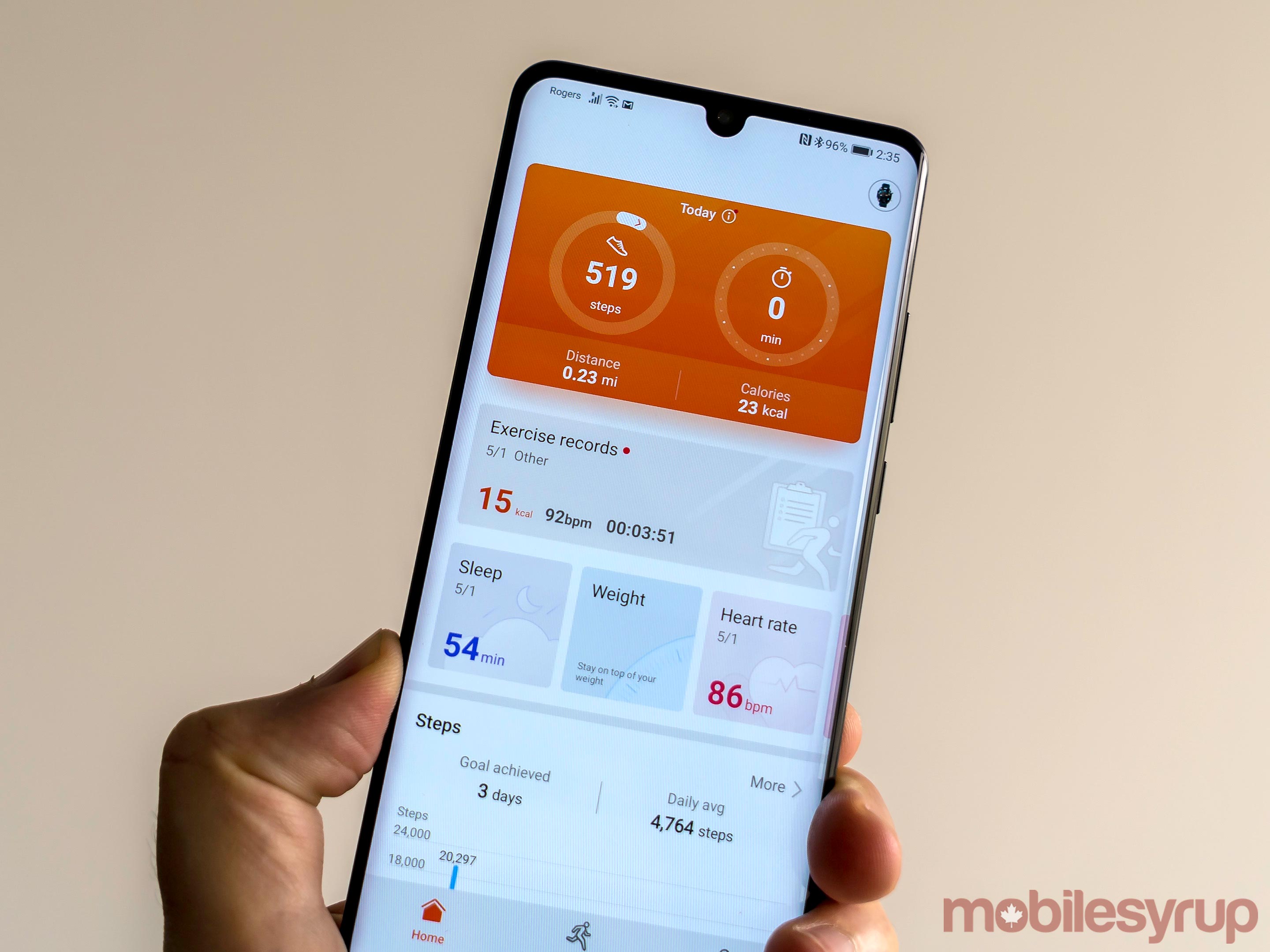 Because Huawei’s watch has solid GPS support, it did better outside where it presented distance tracking accurately. The heart rate monitor was also surprisingly good, never veering too far off any other device I tested at the same time. I would say it’s off about five beats per minute, on average, but not always. It can sometimes be almost spot-on.

I can’t say the same about sleep tracking, which wasn’t always right. It was okay in noting total sleep time, but not always on the mark. Light sleeping and REM were confusing because it would assume I was sleeping lightly when I was just reading a book in bed. I’ve seen better results in other smartwatches and Fitbit’s lineup. 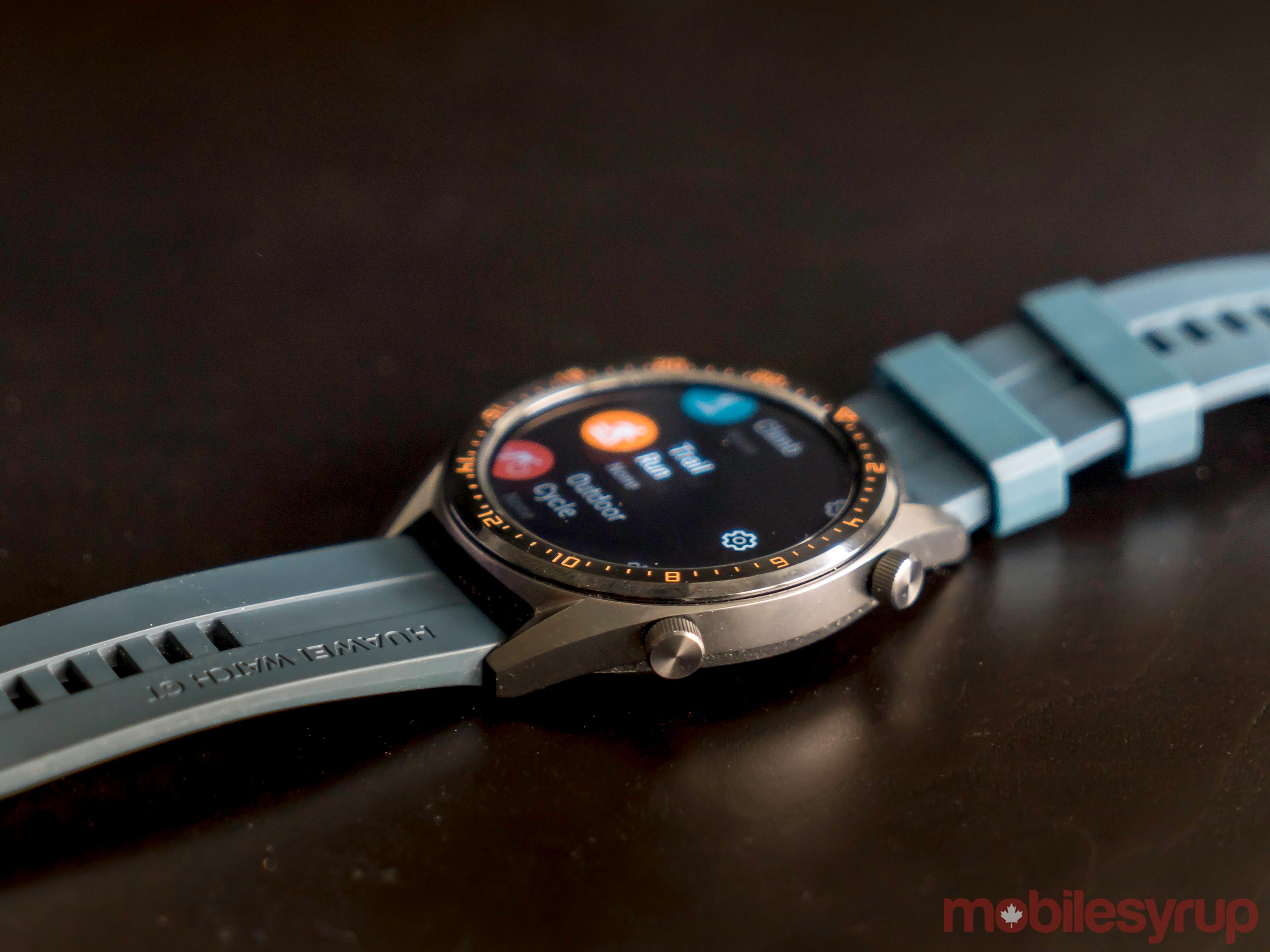 I’ve rarely used a rechargeable smartwatch or fitness tracker that can compete with the Watch GT in battery life. Over the course of 35 days, I only had to recharge it twice, and even then, it was never fully dead.

With leisurely use of the fitness tracking features, I could easily see the watch lasting three weeks or longer before you reach for the charger. Using tracking every day, and liberal use of the GPS will especially knock that down considerably. But still, this was truly impressive battery life.

As I noted earlier, the Watch GT is a device of compromise. It’s a competent activity tracker with basic functionality outside that, not unlike a fitness band.

Only in this case, it’s in the guise of a smartwatch. A good-looking smartwatch, mind you, but a quasi-one, nonetheless.If simplicity is what you’re looking for, and you don’t care for Wear OS or Tizen, then the Watch GT is worth consideration.

"It’s a competent activity tracker with basic functionality outside that, not unlike a fitness band"