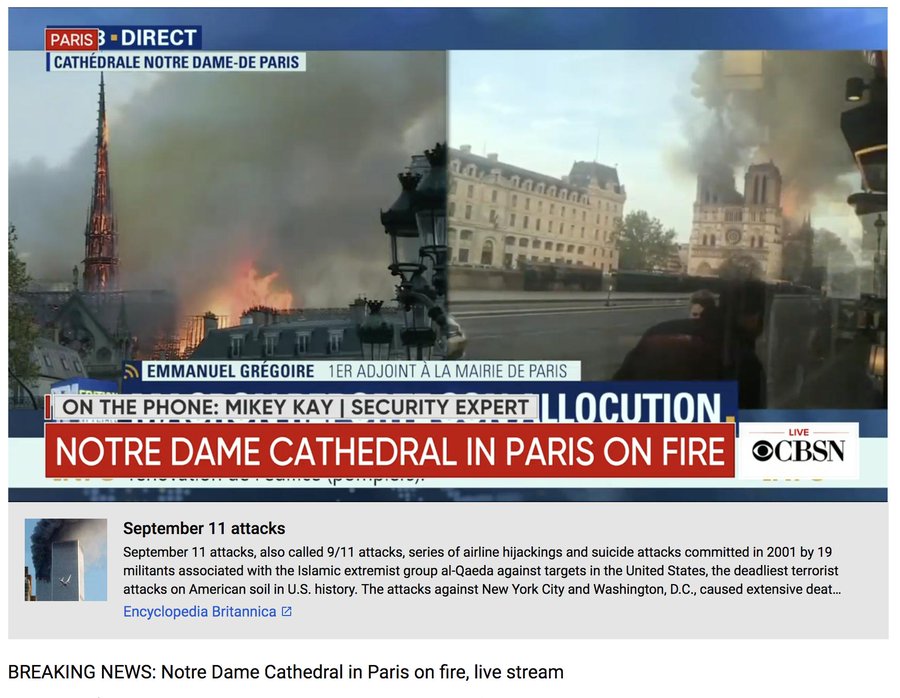 The erroneous fact check “information box” was found on the live streams of CBS and NBC news broadcasts. Twitter user Matthew Harrison took a screenshot of the fact check.

Okay, why the heck does the CBS livestream of the Paris fire have information about September 11 on it?

This has to be algorithmic, right? pic.twitter.com/SGM32G3oVJ

“We are deeply saddened by the ongoing fire at the Notre Dame Cathedral. Last year, we launched information panels with links to third party sources like Encyclopedia Britannica and Wikipedia for subjects subject to misinformation,” said a YouTube spokesperson in a statement to MobileSyrup. “These panels are triggered algorithmically and our systems sometimes make the wrong call. We are disabling these panels for live streams related to the fire.”

YouTube also said it had disabled the fact checking panels on videos of the fire. Since last summer, YouTube has pulled information from different sources like Wikipedia to provide contextual info for potentially misleading claims.

An additional system was rolled out last month, with a fact check information panel appearing when users search for certain terms and phrases. It was launched in India to combat misinformation in the region.

According to reports in Buzzfeed, the current fact checking system sources the information from already-agreed upon fact-checking sites automatically. YouTube went further and explained to Poynter that it’s using the Schema.org ClaimReview markup which can ID fact checks from different kinds of searches. In this case, the 9/11 information was from the Encyclopedia Britannica.

It’s unclear why the association of the Notre Dame fire was made with the 2001 terrorist attack, as there is no evidence that the fire was caused by an attack or set on purpose. The Verge speculated that it could be the tower of smoke rising from the 800-year old building. Currently, French fire services have said the start of the fire could be related to ongoing renovations inside the cathedral.

That is not to say that the event doesn’t require verification against misinformation, as different conspiracy theories linked to the fire had already picked up steam by that afternoon, as documented by Buzzfeed’s Jane Lytvynenko.

Reminder of challenges when stopping misinformation

This mistake comes at a time when governments domestic and abroad are looking for more ways to combat online misinformation. It reveals that there is still much work to be done to perfect these automated systems. In another indication of how difficult this task is, Google announced a ban on Canadian political ads on its platform last month, admitting it could not adhere to the federal government’s transparency requirements.

Democratic Institutions Minister Karina Gould told CBC News that Google could “ultimately” change its mind, and “we will encourage them to do so. However, that’s Google’s decision as to how they comply with the law.”

In January, the Government of Canada committed funds to combat foreign election interference and more recently it said it was considering social media regulation to stymie the spread of online misinformation.