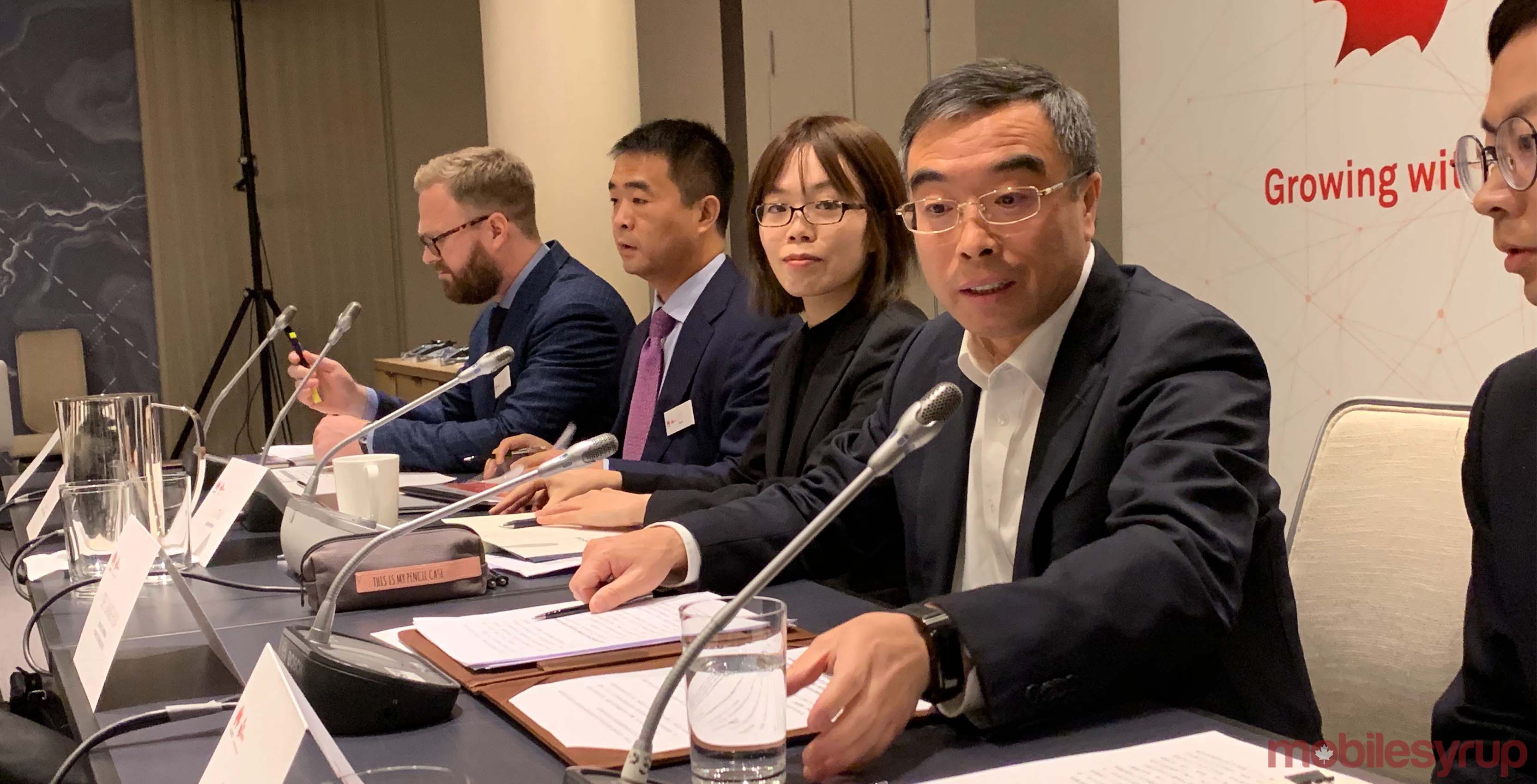 Despite intense scrutiny and an ongoing federal government review, Huawei chairman Liang Hua said whether or not Huawei is banned from supplying networking equipment in Canada, the company is “committed” to continuing to working with its partners on their network infrastructure deployments.

“While we don’t know what the decision will be with the government on 5G, but no matter what the decision is, if the customers choose to work with Huawei, then Huawei will be committed to [working] with customers,” Liang said speaking through a translator to 18 reporters during a roundtable event at the Four Seasons Hotel in downtown Toronto. Liang was referring to continued work and efforts the company has with Bell and Telus on deploying 3G and 4G network infrastructure.

It was the first time Liang was present in Canada to take questions and comment on the recent uncertainties surrounding the security of the company’s 5G equipment.

Public Safety Minister Ralph Goodale is currently overseeing two independent reviews, one on 5G in the country and the other on Huawei and national security. Canada has not banned the Shenzhen-based telecommunications company yet.

Canada and China are in the middle of a bilateral spat that started last December when Canadian authorities arrested Huawei CFO Meng Wanzhou. She faces extradition to the U.S. after the country’s Justice Department laid 13 charges of bank and wire fraud against her, Huawei and its subsidiary Skycom.

“We have had a good relationship with Telus and Bell and even if there is a decision for us to not work on 5G we will work on other products with customers here.”

In August 2018, the U.S. banned government use of Huawei-made technology. In December, reports said President Donald Trump was considering whether to issue an executive order that would prohibit all U.S. companies from using Huawei equipment.

Liang, for his part, didn’t appear phased by any of the recent developments related to his company. He said he hoped the federal government bases its the decision on the company’s technology, instead of other factors.

“Huawei has leading technology in 5G and has great standards in engineering and capabilities. There will be one or the other decision at the end of the review. We will continue to provide good services to our customers in Canada,” he said.

“We have had a good relationship with Telus and Bell and even if there is a decision for us to not work on 5G we will work on other products with customers here.”

He added that it was not realistic for Huawei to serve every market in the world, but for those customers that have chosen the company, the company will “do our best to provide” for them.

“For those who have not chosen us, it is such a regret,” Liang said.

Liang said that the Chinese Foreign Ministry made it clear of the provisions that there is no law in China requiring companies to install backdoors or give Chinese intelligence.

“[China’s Foreign Ministry] says that China has no law requiring Chinese companies to install back doors or collect foreign intelligence,” Liang said, stressing that Huawei Canada would never do that.

To further demonstrate its commitment to Canada, Huawei is expanding its presence here by adding 200 new research and development jobs and increasing R&D investment by 15 percent.

Huawei Canada said the new R&D investments will help it grow its relationships with Canadian businesses. In January, Huawei Canada president Eric Li said the company was set to receive a portion of the $2 billion USD ($2.6 billion CAD) that its Chinese parent company planned to spend over five years.

“We are grateful to have the opportunity to work in Canada — a country with one of the most innovative technology communities in the world,” Li said.

“Whether it’s through helping rural communities stay connected through reliable high-speed internet, investing in R&D at universities throughout the country or contribution to training Canada’s future engineers.”

Huawei Canada currently employs nearly 1,000 Canadians, of which 500 are dedicated to R&D.

In the past 10 years, the company has fostered relationships with 13 universities across the country to help develop the next iteration of mobile technology. The federal government has announced auctions for the spectrum in 2020 and 2021.

“We are grateful to have the opportunity to work in Canada…”

In fact, Liang said Canada was the first market that 5G research began. He said the company wants to help people in the north and said 5G could help provide efficient internet connectivity.

“We call it 5G Air Fibre, this solution will provide solutions to people in the north and it is cost-effective,” Liang said, explaining it is better than satellite.

“The solution provides high-quality Wi-Fi-to-the-home services, this is a solution that we can work with telecom operators,” he said.

Tomorrow, it’s (back) on to #Huawei: the company has invited reporters to a press event where they plan to “express our sincere gratitude to our valued partners and highlight our commitment to Canada.” Global chairman Liang Hua and Huawei Canada president Eric Li will be there

Further to its commitment to R&D, Huawei Canada said it also intends on ensuring all intellectual property “generated in collaboration with Canadian institutions remains in the country.”