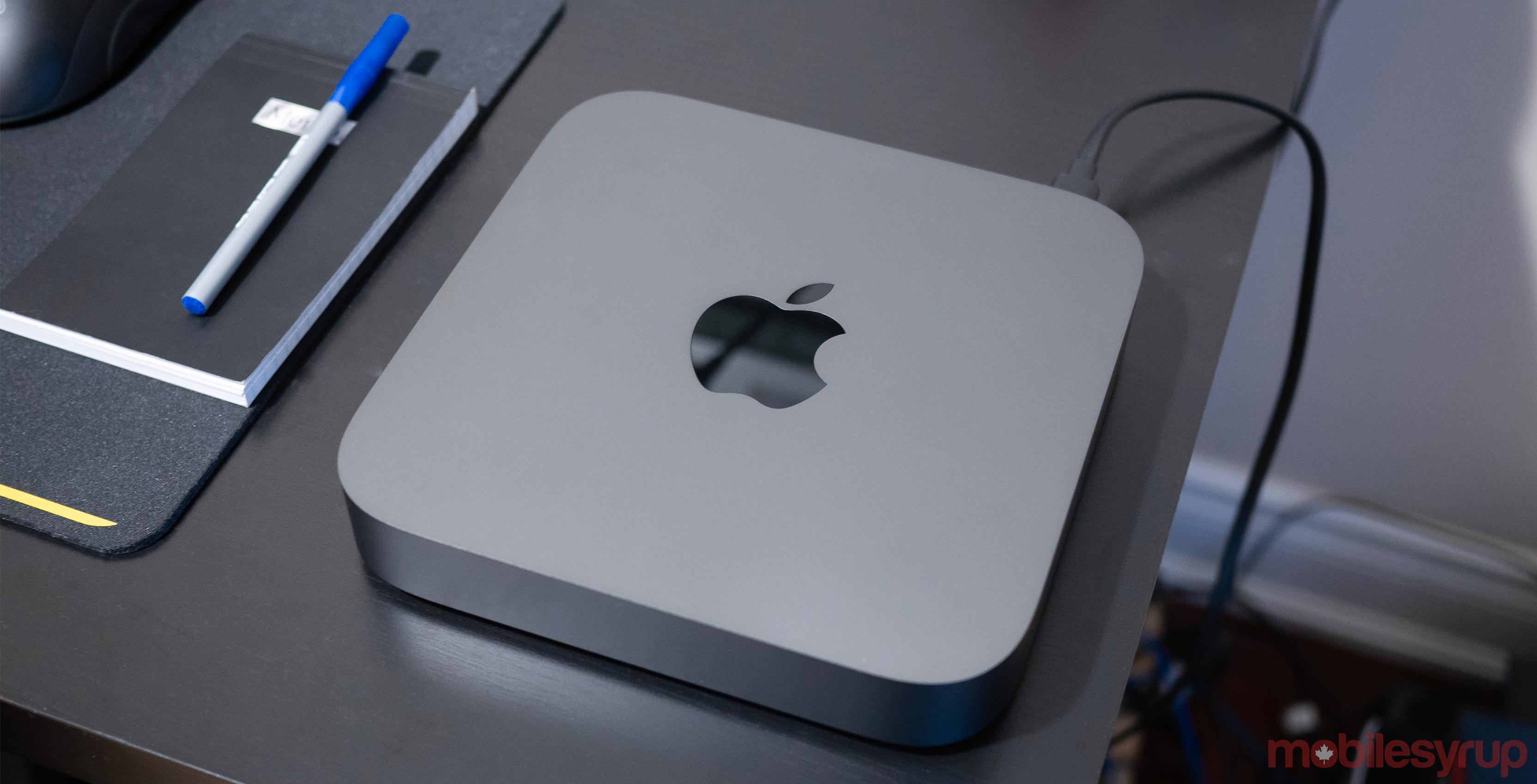 I have admittedly never paid much attention to Apple’s Mac mini.

For starters, desktop devices don’t exactly fit into my workflow given that I’m often writing or editing photos on the go. More importantly, though, the previous version of the Mac mini was outdated when pitted against comparable, often far less expensive Windows computers.

Prior to this year, Apple hadn’t released a new version of the Mac mini since 2014. To put that in perspective, that’s the same year the company debuted the iPhone 6S/6S Plus and the first-generation Apple Watch.

That has changed now that the company has updated the Mac mini with more modern hardware, following an announcement at the company’s recent keynote. Although most likely wrote the Mac mini off as a product Apple planned to quietly discontinue, in an uncharacteristic move, the tech giant has actually listened to the dedicated and passionate user base that helped grow it into the industry influencing behemoth it is today.

Any way you look at the new Mac mini and regardless of configuration, the latest version of the tiny desktop computer is significantly more powerful than its predecessor. For instance, while the original Mac mini maxed out at 16GB of RAM, consumers can now configure the computer with up to 64GB of DDR4 RAM. 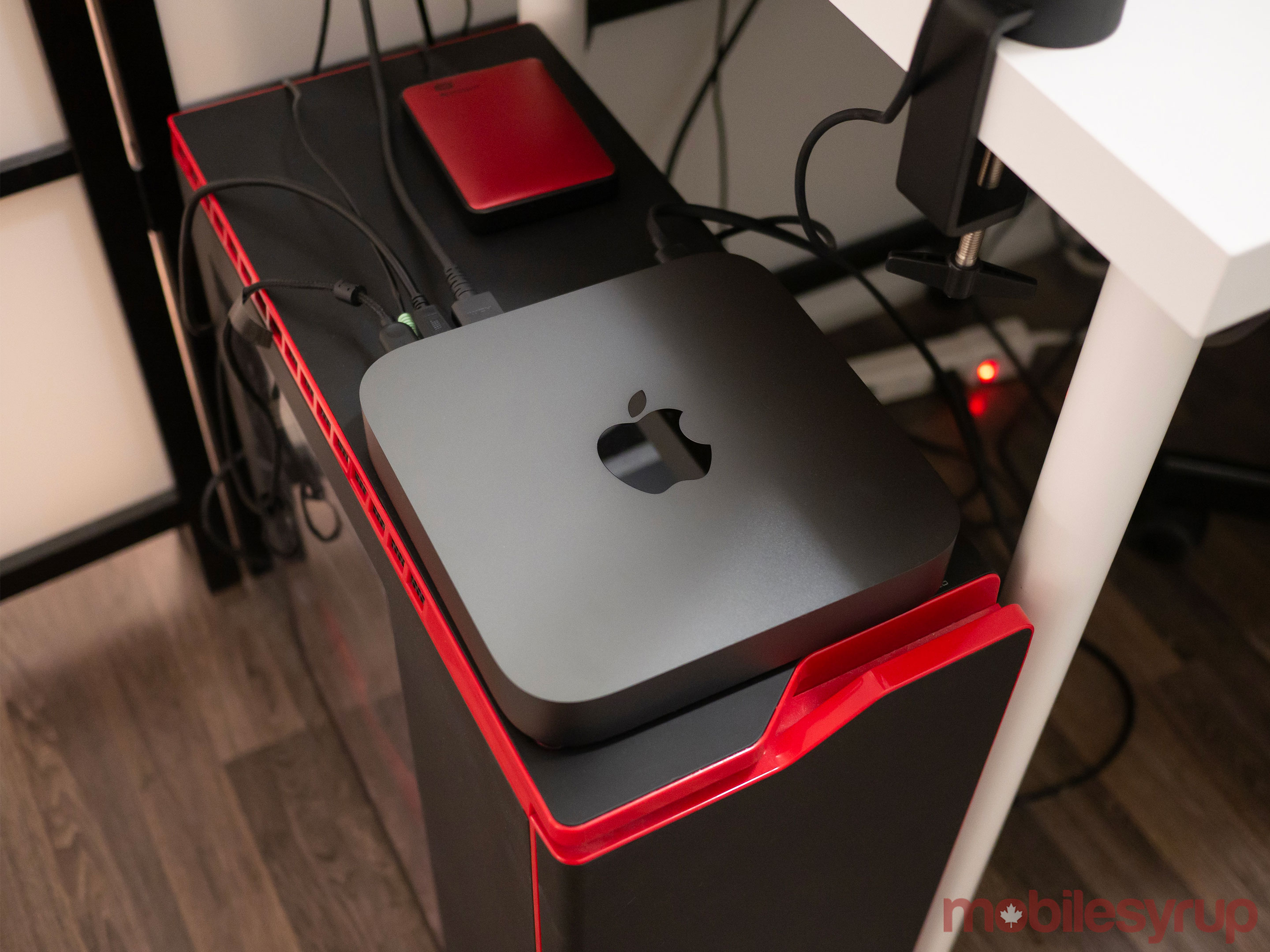 Apple has also increased the speed and capacity of the diminutive desktop’s onboard storage with it switching to SSD only, and now offering storage ranging all the way up to 2TB. That said, as is typical with Apple’s products, storage comes at a premium, with the 2TB storage costing an additional $1,680 CAD on top of the cost of the Mini.

However, the most significant change with the new mini is the option to configure it with up to six cores with either an 8th-generation Intel Core i5 or i7 processor. The lower-end Intel i3 version of the Mac mini, which is the configuration I tested, is still available, as well. Graphics card wise, the Mac mini features an integrated Intel UHD Graphics 630 card.

Other changes include four Thunderbolt 3 USB-C ports on the rear of the device, coupled with two USB-A plugs, making the Mac mini one of the few Apple products to feature both standard USB-A ports and USB-C — if only more Apple products adopted this strategy. The Mini also thankfully still includes a standard 3.5mm headphone jack, just like Apple’s other Mac devices, as well as an HDMI out port.

Apple says that thanks to the inclusion of Thunderbolt 3, the Mac mini is capable of powering two 4K displays simultaneously. It’s also worth noting that the Mac mini is compatible with Apple’s Blackmagic external graphics card. 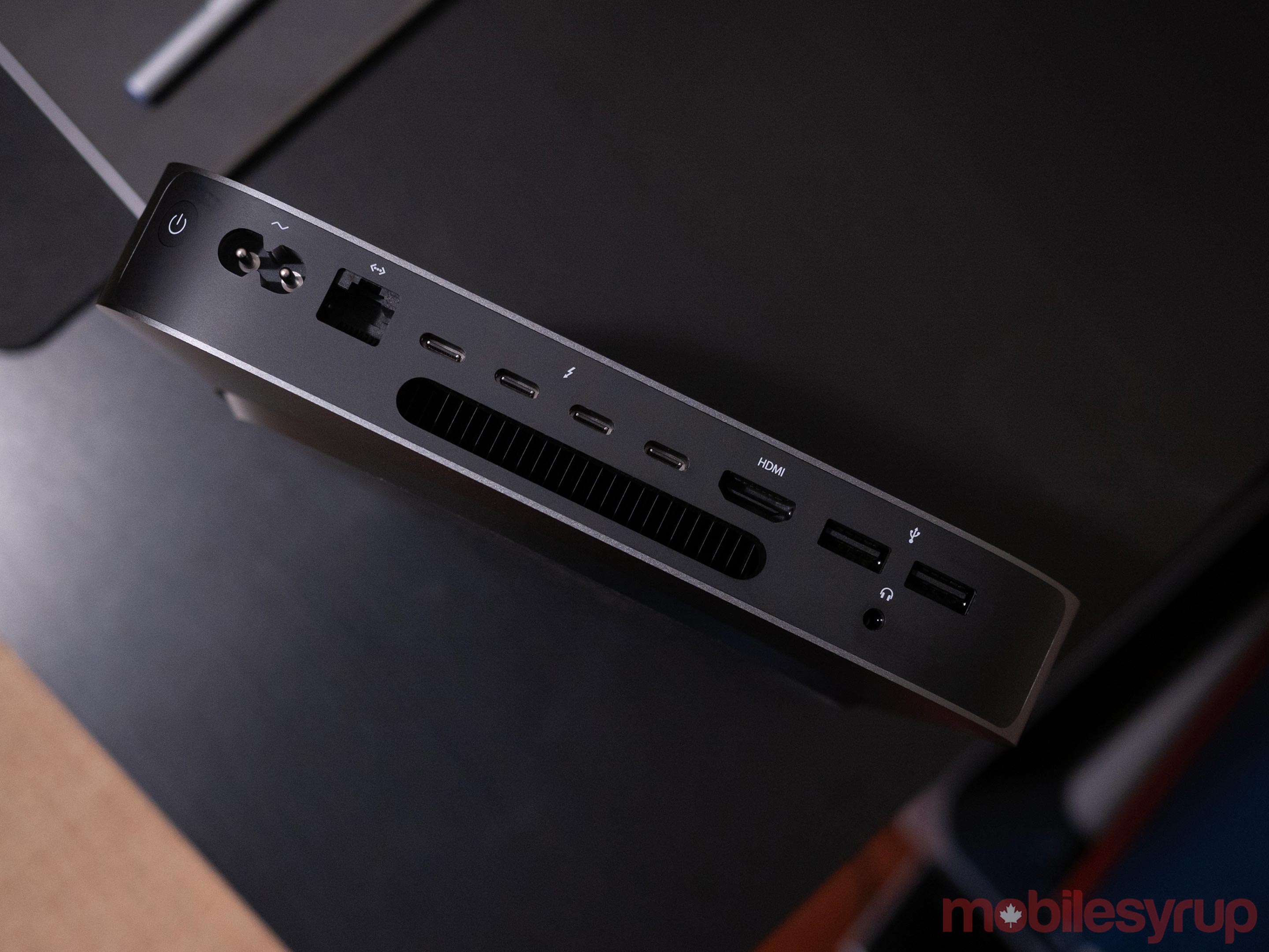 Further, the pint-sized device features a single 10 Gigabit Ethernet port and a standard power cable slot. The other notable update with the new Mac mini is Apple’s T2 security chip, which manages the device’s encrypted storage and secure boot, as well as a completely revamped cooling system.

Apple has also updated the Mac mini’s colour options to include ‘Space Gray,’ moving the device’s available hues more in line with the rest of the Mac lineup. Similar to the new MacBook Air, Apple says that the new Mini is constructed of 100 percent recycled aluminum, though it still retains the sleek, compact look of its predecessor.

It’s also worth noting that the Mac mini doesn’t include a mouse and keyboard in the box, just like past iterations of the desktop. I placed the Mac mini review unit Apple provided MobileSyrup with on top of my rapidly aging gaming PC, then hooked up my flashy gamer with a capital ‘G,’ Razer keyboard and mouse via USB-A.

On a more serious note, the lack of an included keyboard and mouse is something to keep in mind though given that the Mac mini remains one of the few more affordable ways to enter into Apple’s Mac ecosystem. 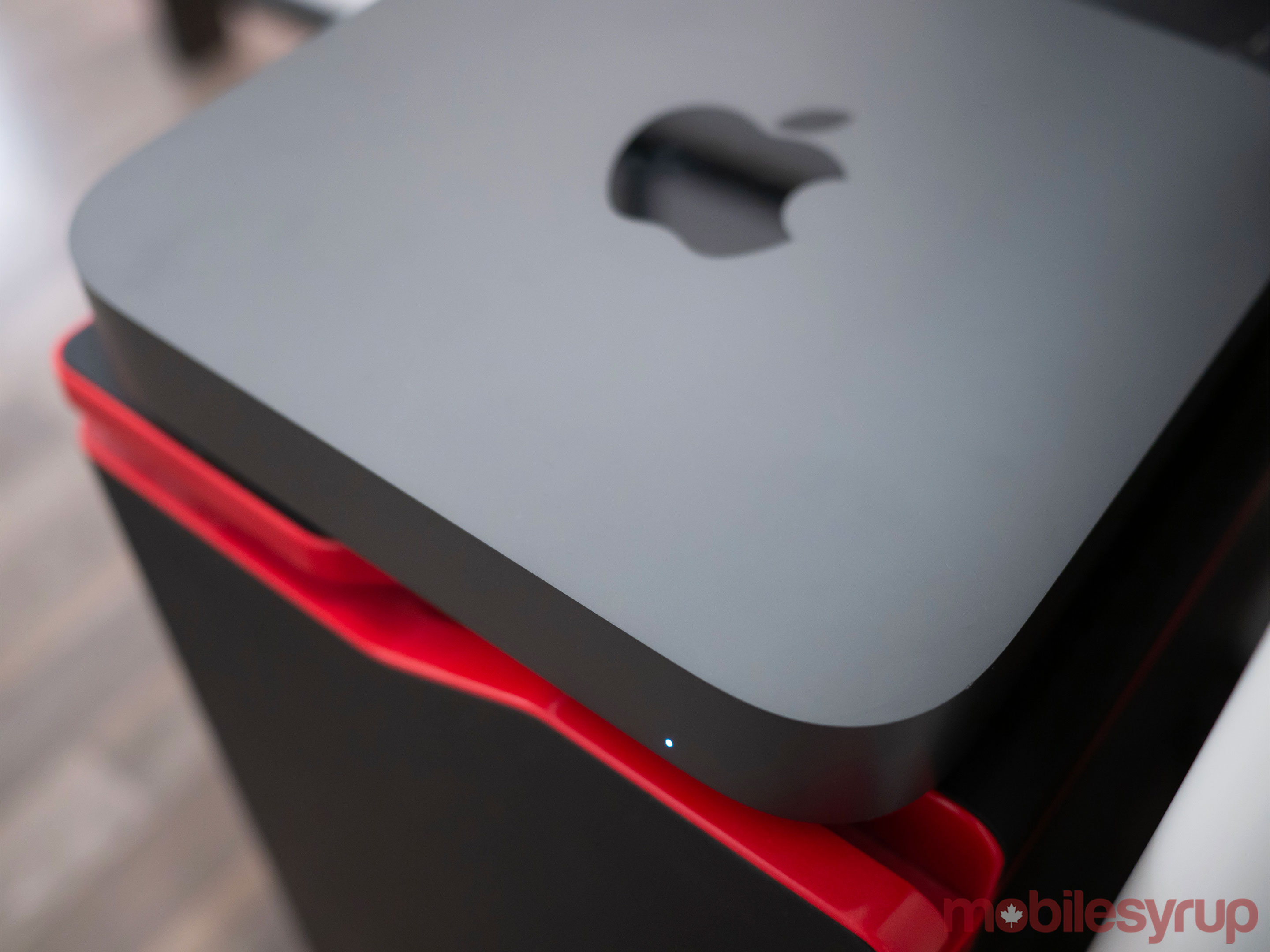 The Mac mini that Apple provided MobileSyrup features an Intel i3 quad-core processor with a base speed of 3.6GHz, 8GB of RAM and 128GB of PCI-E flash storage. This particular configuration comes with a price tag of $999. There are also i5 and i7 versions of the Mac mini available, with RAM options extending all the way to 64GB, coupled with 2TB of storage.

As a result, the price of the Mac mini ranges considerably, starting at $999 and going all the way up to an astounding $5,119.

Interestingly, unlike other Apple products, RAM remains slotted with the Mac mini and isn’t soldered directly to the device’s motherboard. This means that while Apple, as expected, doesn’t recommend doing so, it is possible to upgrade the Mac mini’s RAM on your own, just like with past versions of the device. Even more surprisingly, the tech giant says that doing so doesn’t void the mini’s warranty. 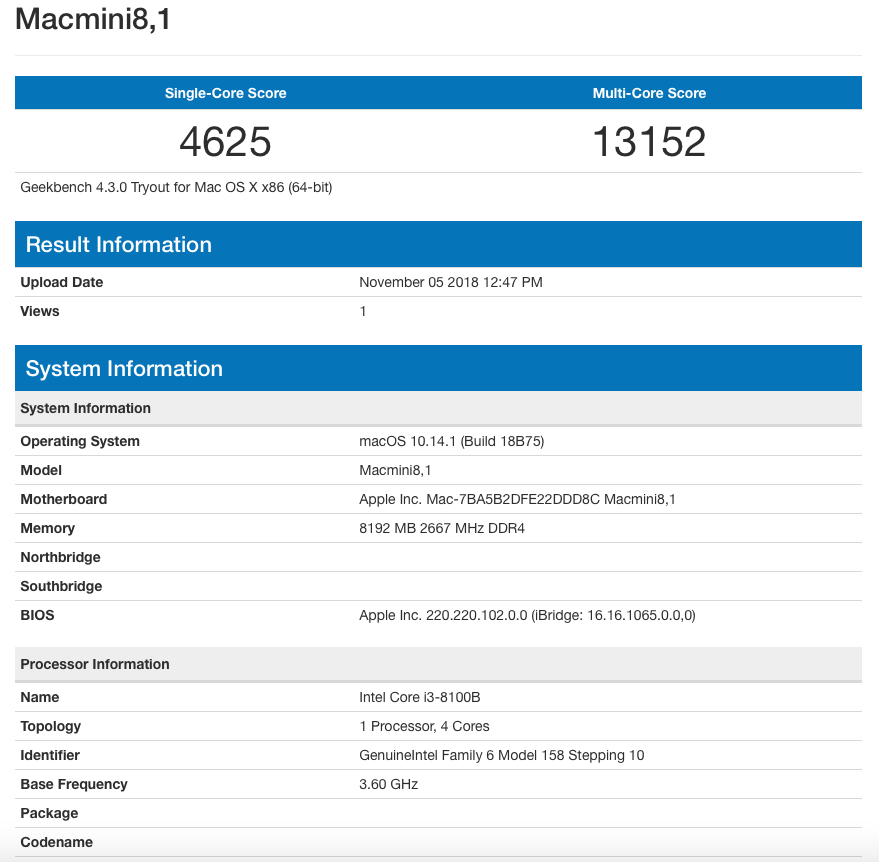 While far from benchmarks that blow the competition out of the water, given this is a roughly $1000 configuration of the mini, the results are decent. 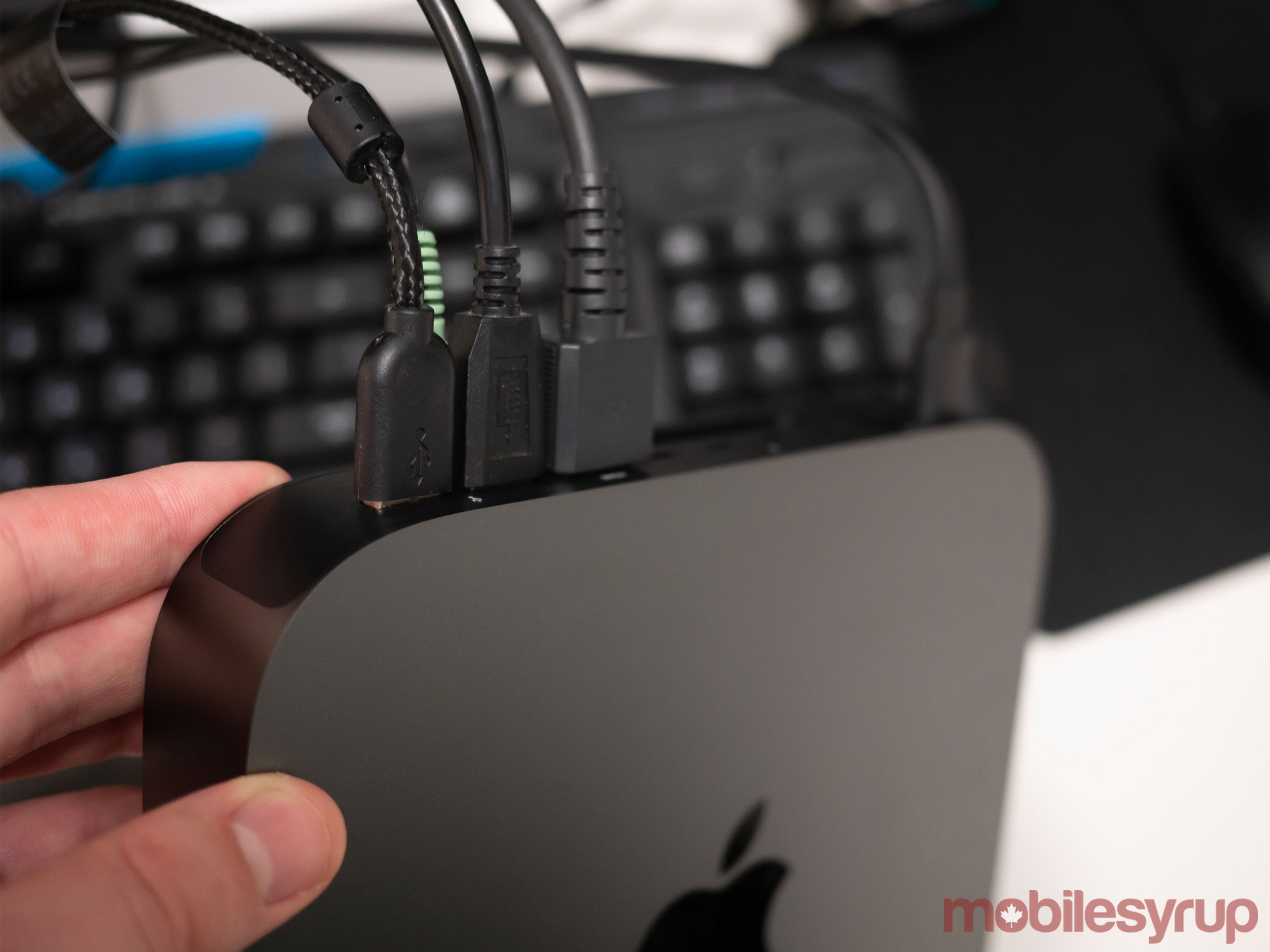 The main question surrounding the device is how it fits into the tech giant’s lineup of devices. As Apple has done over the last few years with its various Mac computers, but perhaps even more so this time, the company is positioning the Mac mini as a tool for creators.

For instance, Apple has frequently boasted that the new Mac mini is capable of transcoding HEVC video 30 times faster than its predecessor, positioning the mini as a small but capable video editing tool.

This direction was emphasized by Apple showing off how musicians, video editors, photographers and other creatives use the Mac mini, both during the company’s recent fall hardware keynote, as well as in subsequent closed-doors briefing following the event.

Apple’s Mac mini is available for pre-order now and will go on sale on November 7th.