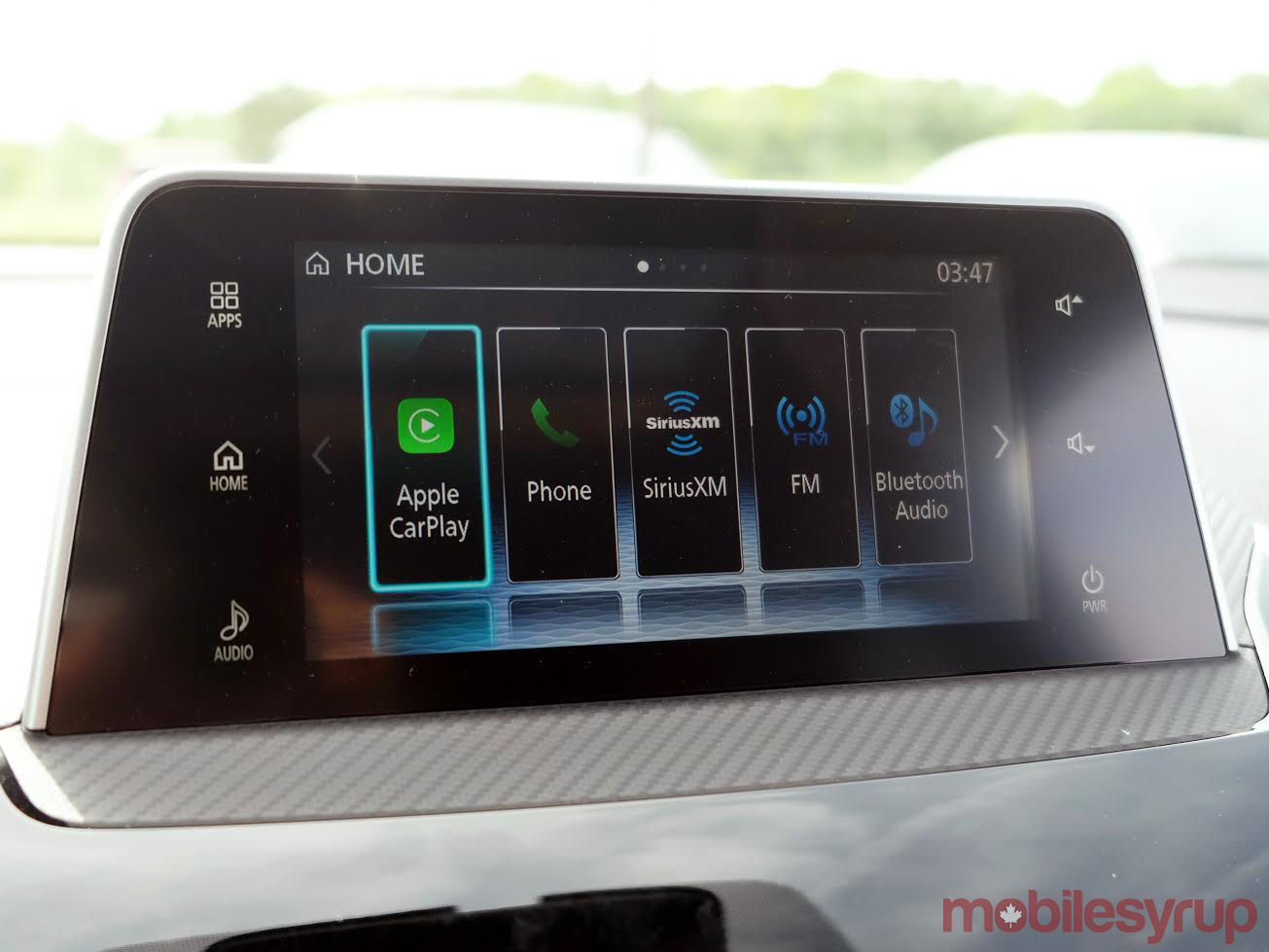 Mitsubishi is a brand still finding its place in Canada, despite a long tenure here. While it has earned its stripes with the performance and racing crowd, what’s in the dash becomes a different matter altogether.

Smartphone Link Display Audio (SLDA). That’s what the automaker calls its infotainment system. Not exactly a zinger of a title, but it does somewhat fall in line with a wider system it’s building called Connect. Testing the latest version in a 2018 Eclipse Cross SUV, the full gamut doesn’t come off as flashy, but is serviceable.

Mitsubishi doesn’t include or offer in-car navigation packages from the factory, making it something of an outlier that way. This is every bit a smartphone-centric system, and so long as you have the right software on both sides, the experience can be efficient. 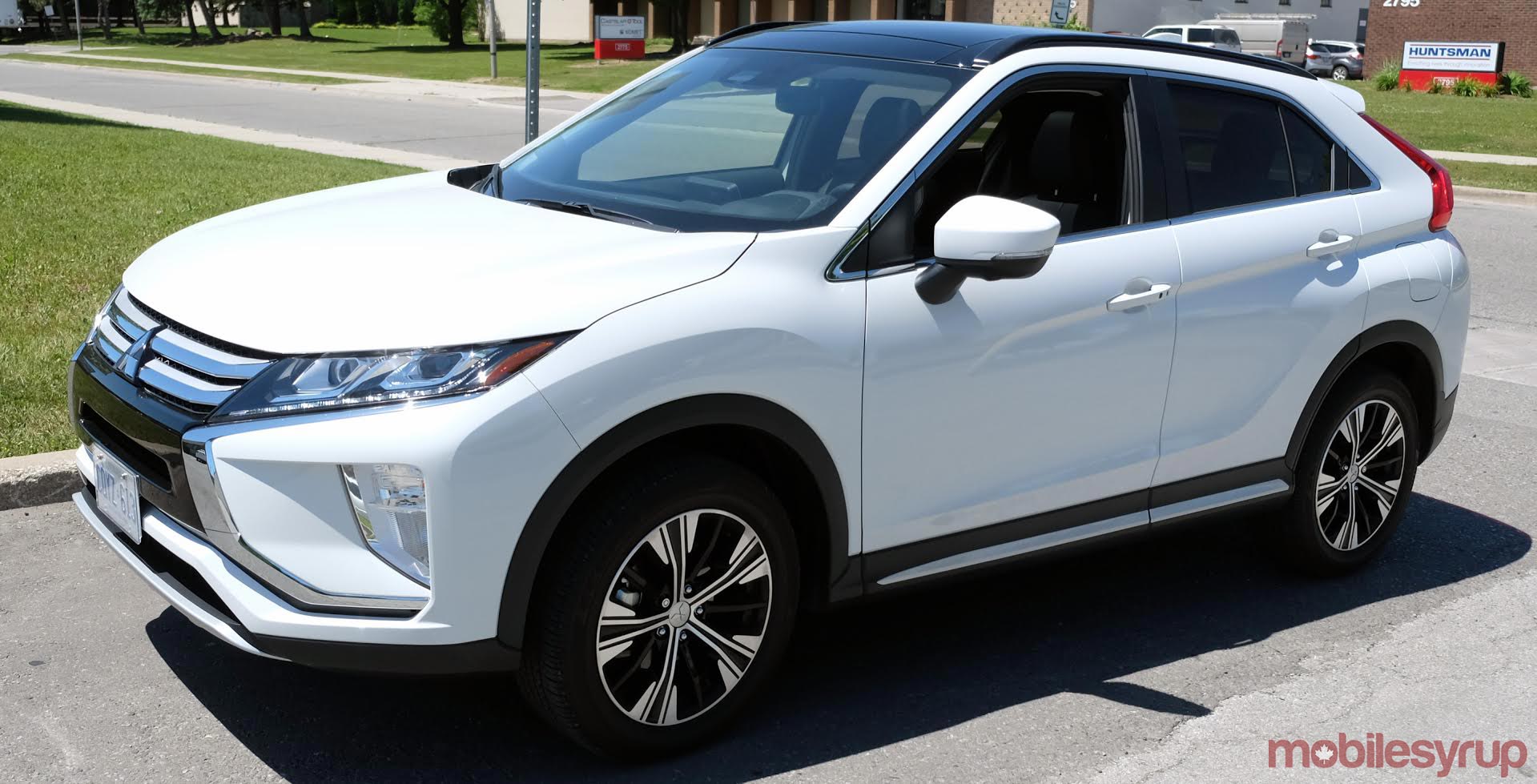 To augment what was previously available, Mitsubishi revamped the interface to coincide with the two main input methods.

First, is the 7-inch display sitting atop the dash, and second, is the touch-sensitive trackpad nestled into the centre console. Both work in their own ways, but ultimately lead to drivers’ deciding which one is most convenient and expedient.

Reason being that this vehicle isn’t flush with physical knobs for anything outside of climate control in the cabin. There are the common steering wheel controls, but it became obvious during my testing that the system’s designers were keen on getting drivers to learn the trackpad.

While there are some features specifically from Mitsubishi, the keys are Apple CarPlay and Android Auto, which come standard in all trims in Canada. There is no in-car LTE or Wi-Fi hotspot, somewhat limiting connectivity. 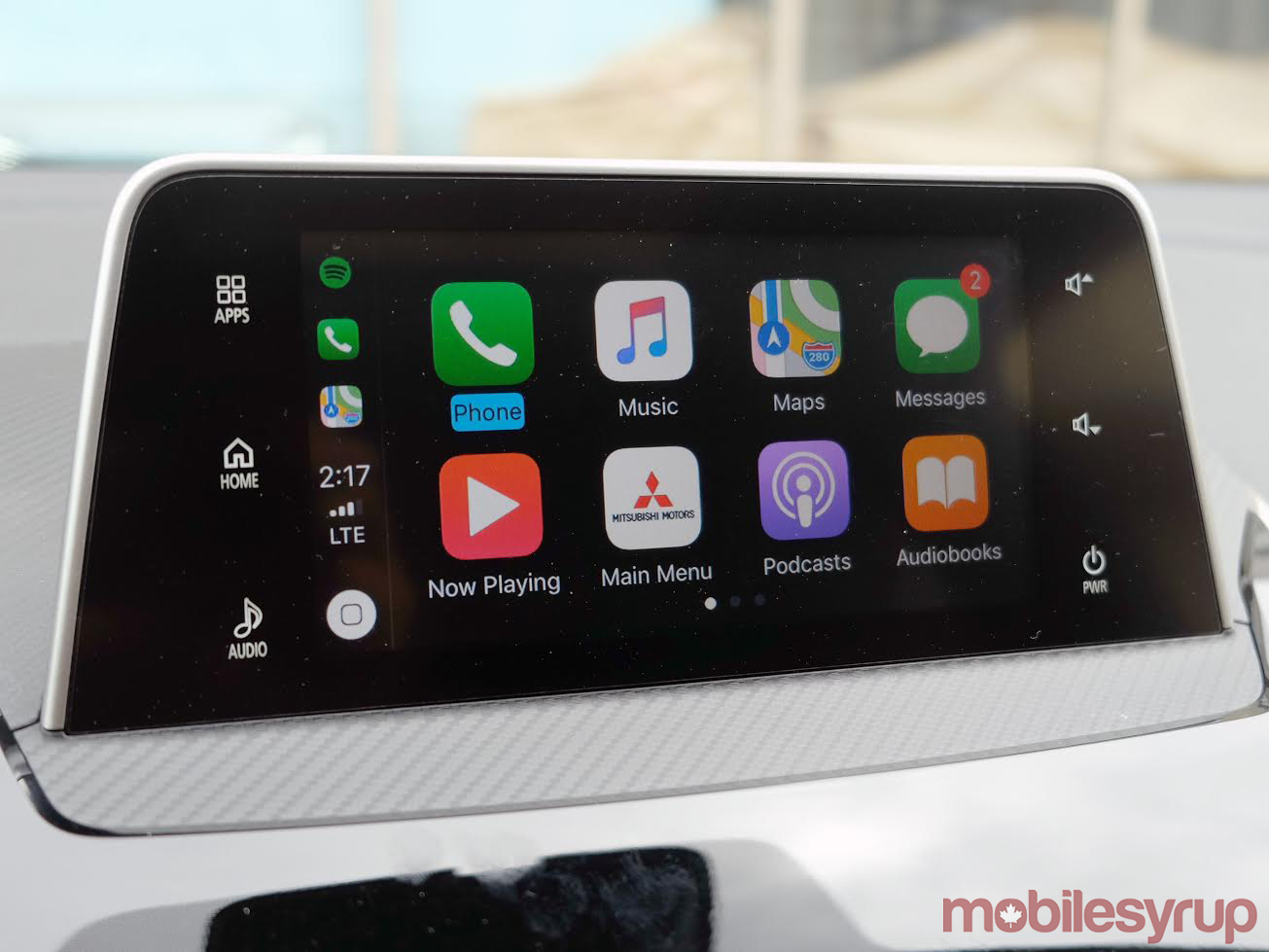 Here, too, there is not a wide array of connections. Two USB ports adorn the bottom of the dash, both of which can be used to connect to the SLDA. A 12-volt socket and Aux-In port round out an otherwise unsurprising — though important — set of options.

Unfortunately, there’s no wireless charging, thus negating any chance of wirelessly connecting to either CarPlay or Android Auto without plugging in. 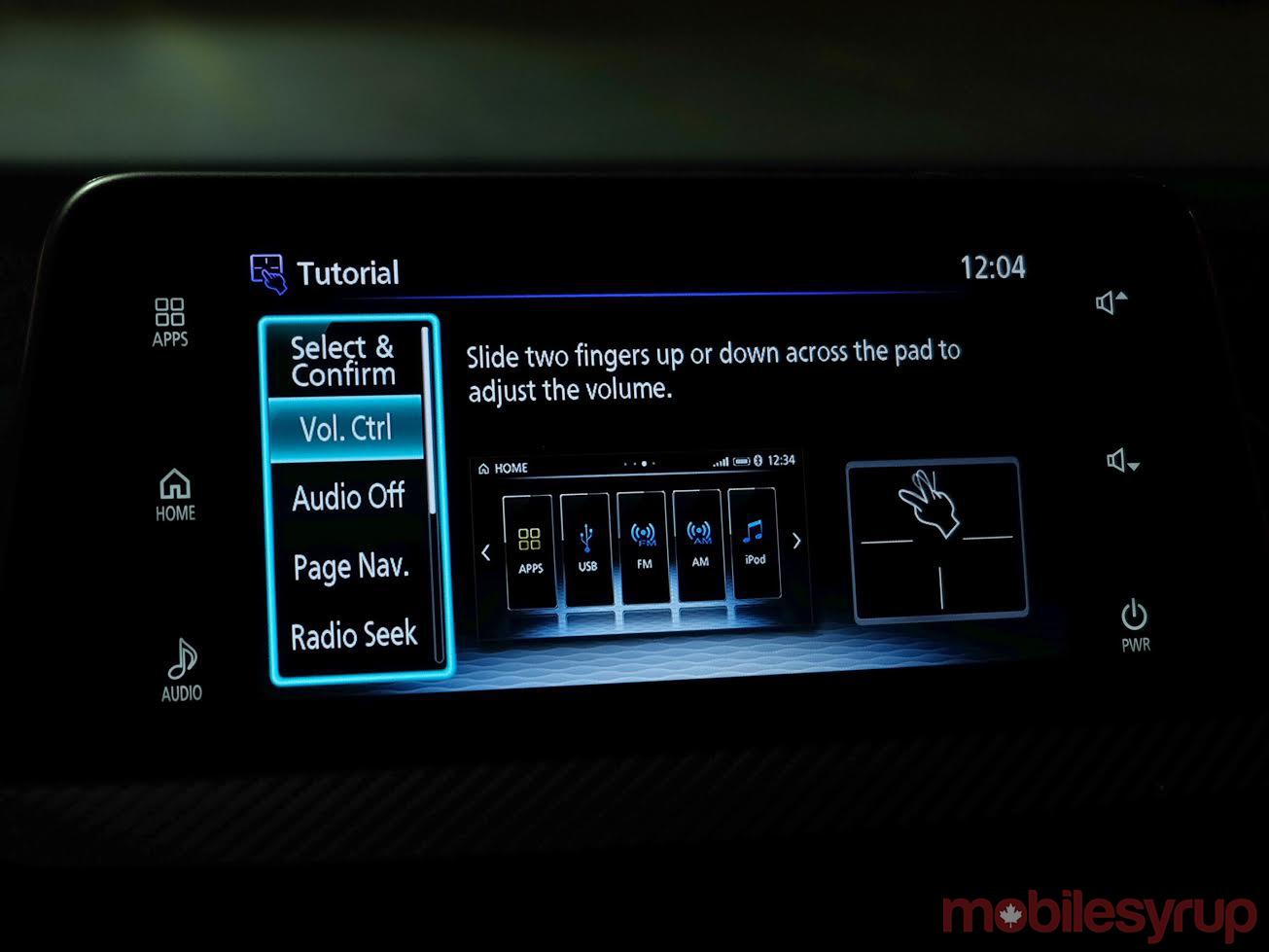 There is standard Bluetooth, complete with support for Siri Eyes Free and even Google Assistant. Mitsubishi’s own voice recognition system isn’t disabled under either circumstance, meaning drivers would have to long press the voice button to get Apple’s or Google’s voice assistants to chime in.

It’s not especially deep, but Mitsubishi’s own voice recognition isn’t bad at getting the basics down. I had no trouble using it to make calls, and found it pretty effective for switching audio inputs. I could also cycle through them from the steering wheel, but at least I can tell it what I want to hear from. 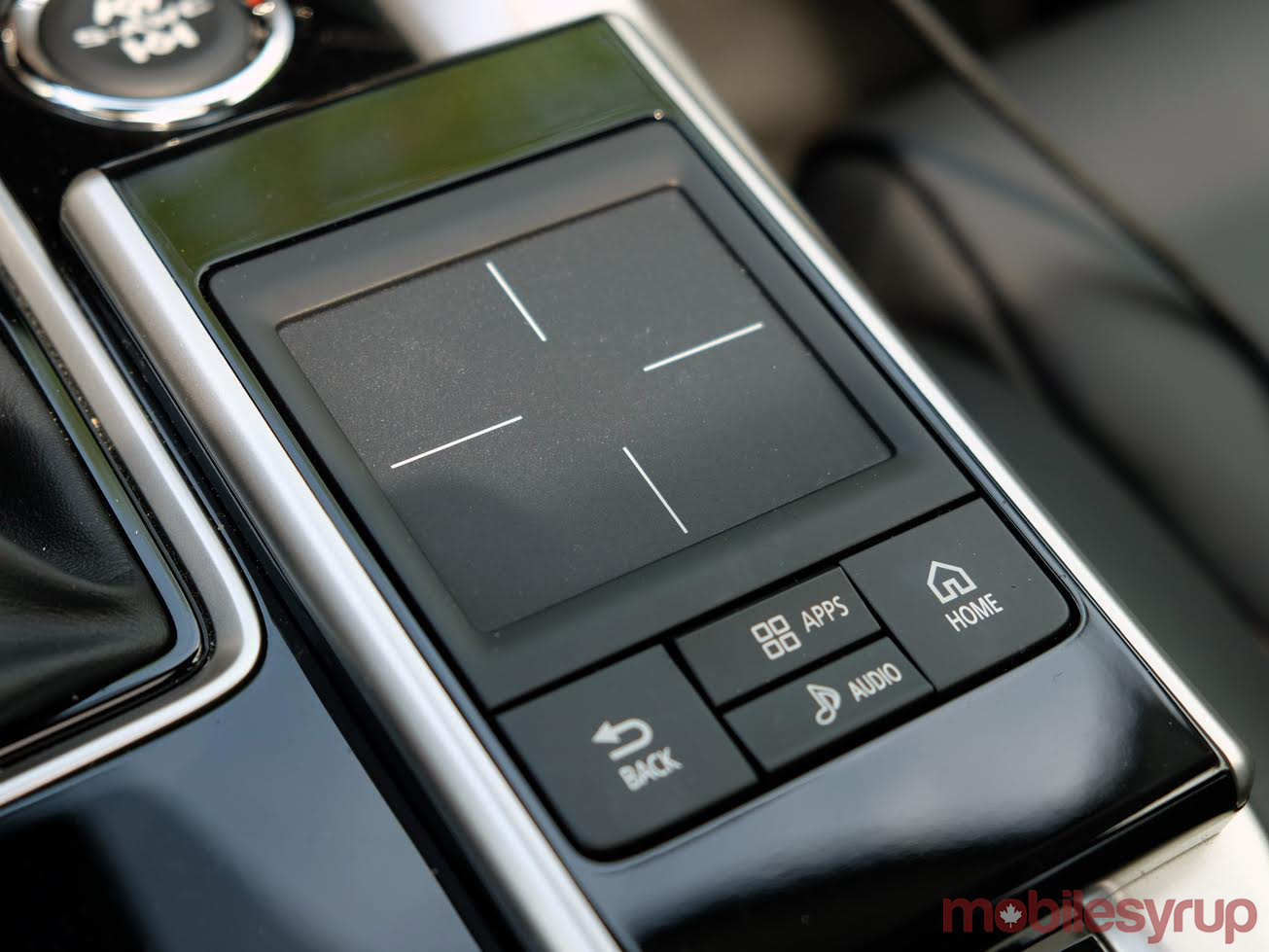 With Apple now seeing the light and realizing that it has lost the battle for mapping supremacy, it opens up iOS 12 to bring in far better alternatives. Google Maps and Waze will be chief among them, but others are sure to follow.

That makes Mitsubishi’s choice to not offer any in-car navigation package seem shrewd. Updating those maps has been notoriously slow and inconvenient, regardless of the automaker, perhaps foreshadowing an industry-wide abandonment in the coming years. It also means losing a revenue stream, so it will be interesting to see if others follow BMW’s example of essentially charging rent to use CarPlay to make up the loss.

Mitsubishi also didn’t integrate a map, like Ford did with Waze to accommodate iOS users, but that may be a moot point once CarPlay truly opens this fall. 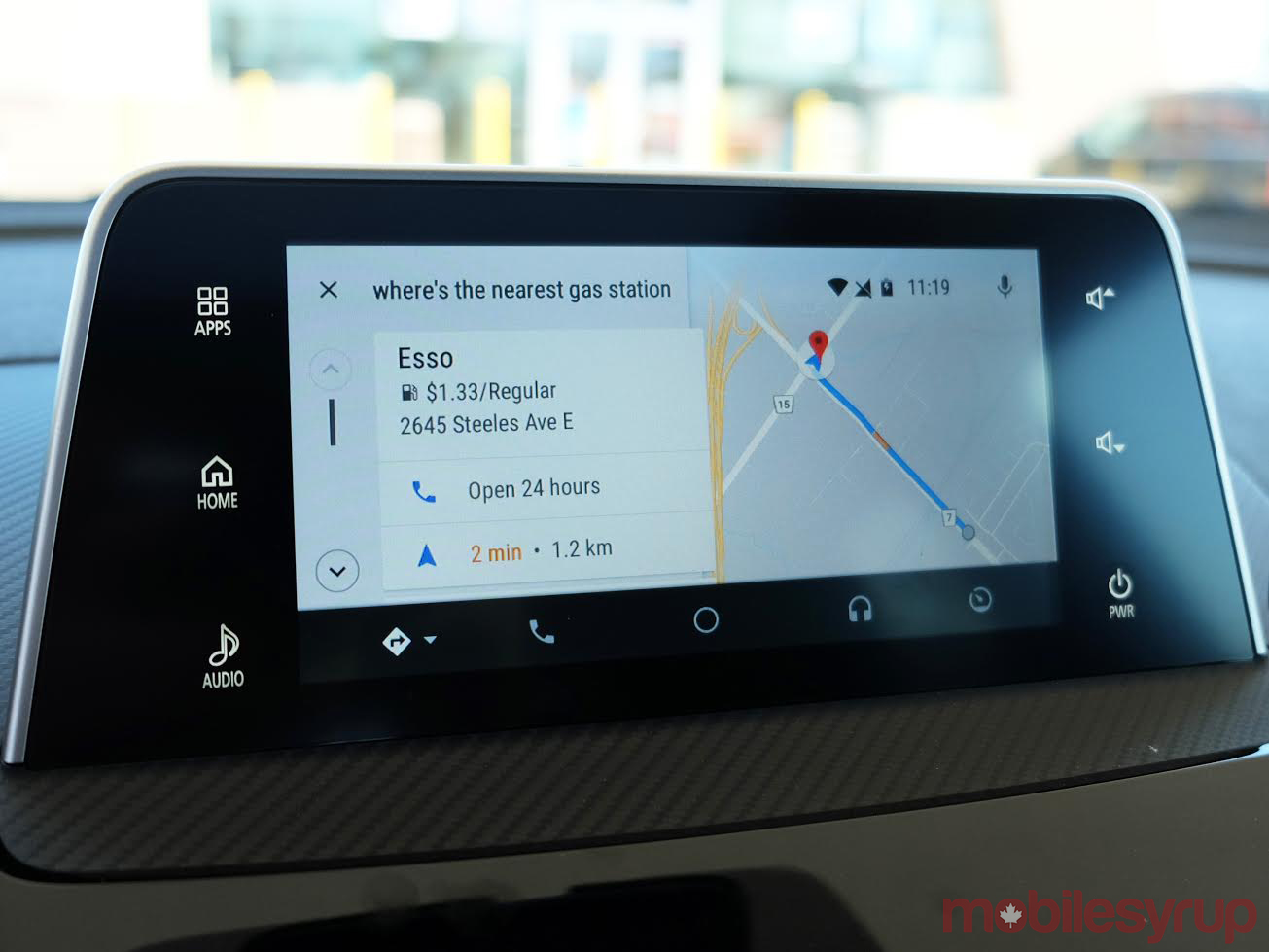 The trackpad is like a cross between the rotary dials used by German automakers and the touch surfaces some brands, like Lexus and BMW, have pursued. It works in a very similar way to the dials in that one swipe over moves the highlighted part on the screen in that direction.

Swipe two fingers up to raise the volume, two down to lower it. Two fingers across to fast-track through the main menu layout. One finger to wade through options onscreen, and a push to select.

The smartest move was including an onscreen tutorial to learn how it works. The pad’s functionality is limited, so the learning curve isn’t so much what it does, but rather how to do it with ease. Over the course of the week, I got better, but it was clear to me this was something that needed more time to master.

You can adjust the pad’s sensitivity, but only to a limited degree. Something like this could easily become frustrating while driving — at least until you get the hang of it. That’s why the screen’s touch input became a nice fallback for me.

Like any infotainment system, having both platforms is an improvement over whatever existed before. That’s no different here, only that Mitsubishi makes them the centerpiece of the whole thing.

Given there’s not that much coming out of the SLDA system natively, drivers would need to lean on either one to integrate apps. The timing is good, too. More music apps are available on CarPlay now than at any other time. Android Auto doesn’t have all of them, but it has the key ones. Apple Music would be a nice addition, but is nowhere to be found, and Google has been non-committal about it so far.

The list for both platforms could always be a little longer. I’ve personally been waiting for SoundCloud. I wouldn’t mind seeing an equalizer app make it on there as well.

What Mitsubishi did well was integrate the trackpad. I found navigating either platform to be similar to what I’ve experienced in other vehicles from BMW and Audi. Again, as I noted, it takes time to get used to it, but assuming it only gets smoother, it negates having to reach out for the screen.

Steering wheel controls were great for volume, skipping tracks or making and taking calls, but that’s as far as that went.

Mitsubishi has essentially set up its system to rely on Apple and Google for the integration side. If you dislike either platform, your options are fairly limited beyond that. Sure, Bluetooth audio works fine and you can still make calls, but anything related to navigation or other messaging apps requires plugging in and going from there. You won’t get an in-car Wi-Fi hotspot or advanced features through a dedicated app (like other automakers have), but this is a pretty consistent and competent package, as is. As long as you don’t expect all the bells and whistles, you may be satisfied with everything available here.

You may be satisfied with everything available here.