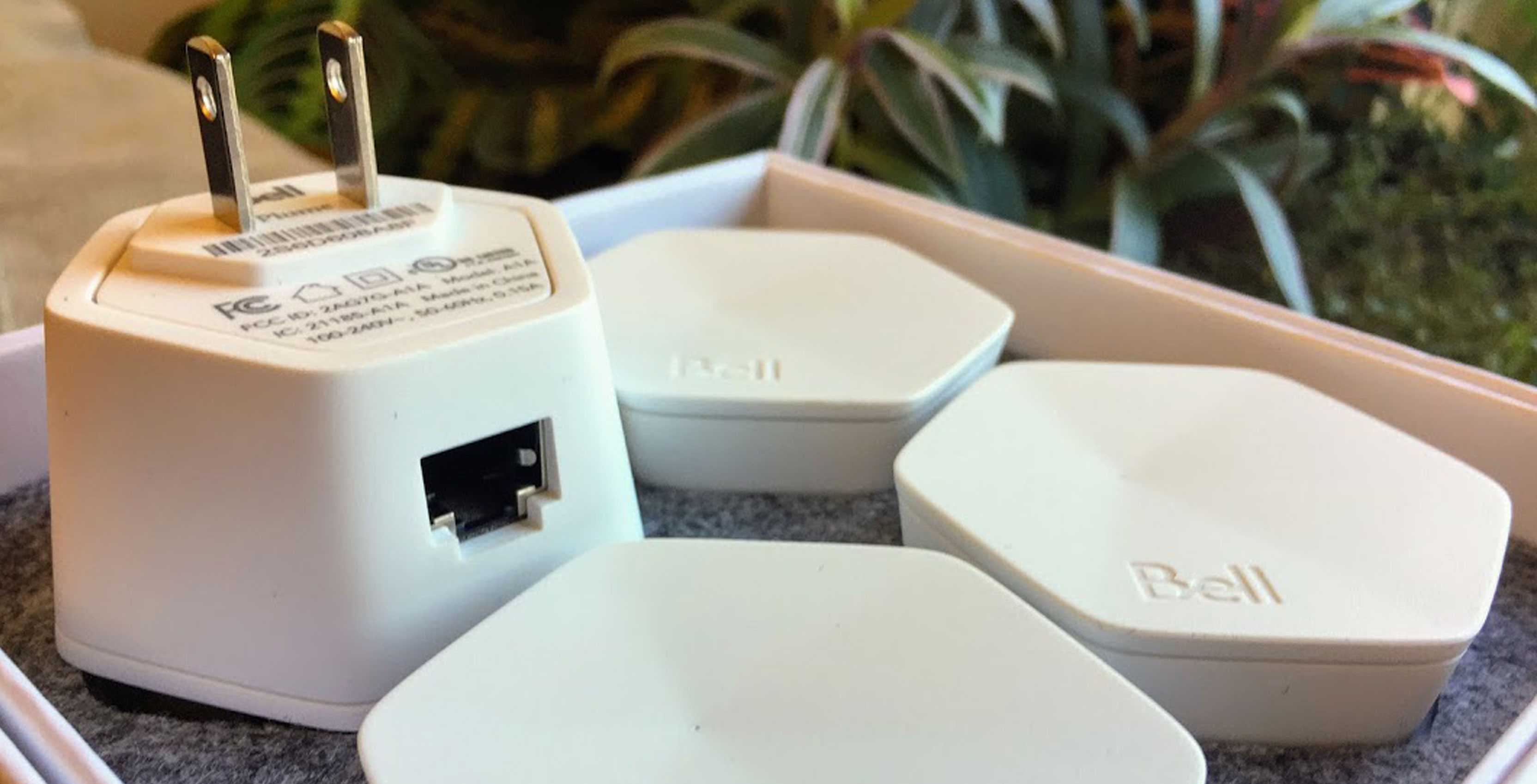 There’s a good chance that you’ve heard people talking about “mesh” Wi-Fi lately, especially as a solution to crappy Wi-Fi in your home. Mesh refers to mesh networking, an approach to wireless networks that intelligently links two or more Wi-Fi nodes in order to increase speed and coverage for a given location. We’ve had the chance to test mesh products from vendors like Google, Linksys, D-Link, and Securifi, and without exception, they all improved Wi-Fi coverage in our home, and completely eliminated the dead-spots that a single Wi-Fi router couldn’t reach.

Mesh networking is so effective, ISPs are starting to add it to their internet product offering. The first to do so in Canada, is Bell, for an extra $5 a month on top of your existing internet plan. Mobile Syrup spent a week with Bell’s mesh solution — simply known as Bell Whole Home Wi-Fi — to see if it could compete with stand-alone systems and whether you should consider adding it to your home. Here’s what we found.

First things first: Bell’s Whole Home Wi-Fi solution is only compatible with its Home Hub 3000 modem. If you’ve got Bell’s Fibe TV service, you may already have one of these installed, but if not, you’ll need to sign up for a bundle or an internet-only plan to get one.

If you already have a Home Hub 3000, you may not need Bell’s Whole Home Wi-Fi add-on. The 3000 is already a pretty powerful tri-band Wi-Fi router, and it’s possible that it can already adequately cover your home’s Wi-Fi needs. If you’ve never used its Wi-Fi — because you already own a Wi-Fi router that you like — try it out. You might not need anything else. 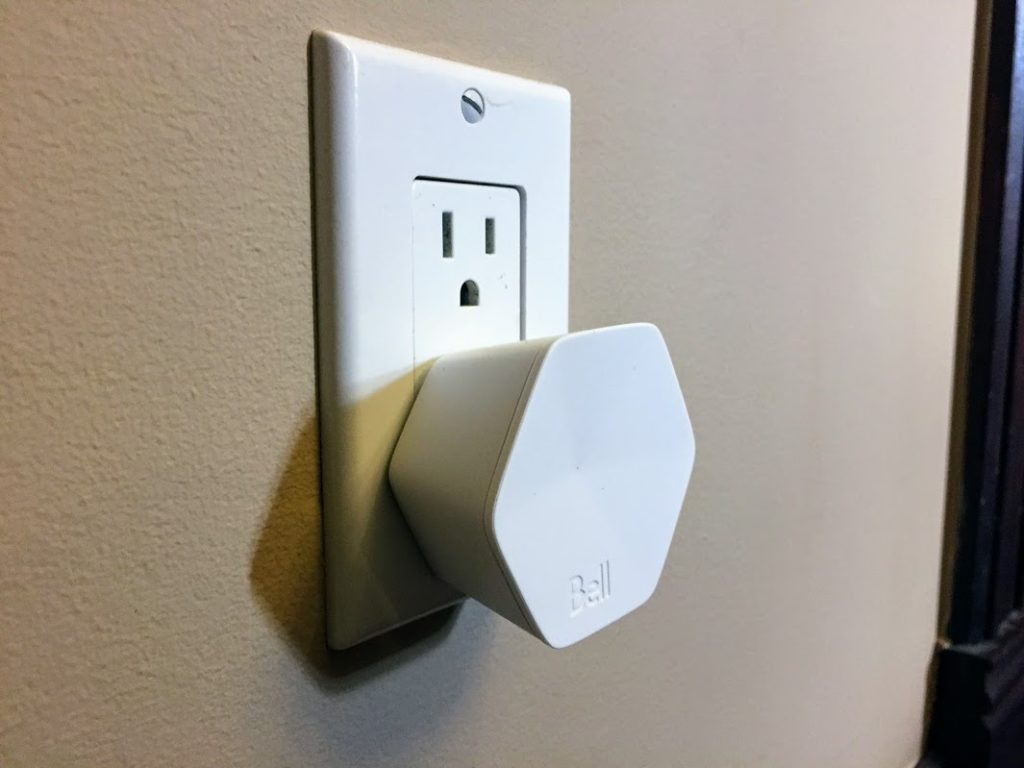 Bell’s Whole Home Wi-Fi system is based on little devices called “pods.”  For the $5 a month fee, you get four of them, but more can be rented at $2 a month per pod, up to a maximum of 18 pods. They’re tiny — about the size of a small cupcake — and plug right into a regular electrical outlet. If they look a little familiar, it’s because they’re built by a U.S. company called Plume, which sells them as a standalone mesh Wi-Fi solution. Bell’s version is essentially identical, although you don’t get to choose from Plume’s nifty colour choices of black, silver, and champagne… white is the only option.

Size sometimes matters, and when it comes to placing devices all around the home, as you do with any mesh product, it can matter a lot. Even mesh products as elegant and attractive as Google’s Wifi, or Linksys’s Velop, are still highly visible, and require a spot amongst your other possessions — plus you’ll need to artfully hide their power cords. Bell’s Wi-Fi pod on the other hand, is the Houdini of the wireless world, all but disappearing entirely. Not only is it small enough to go virtually unnoticed, it won’t block the second outlet, something that happens all too often with AC adapters. The only thing that might improve the design would be if it had a pass-through system so that you could still use its outlet for another device — but we’re really nitpicking here.

Each pod has its own Ethernet jack, a handy feature for plugging in any internet-capable devices you might have that don’t already support Wi-Fi. 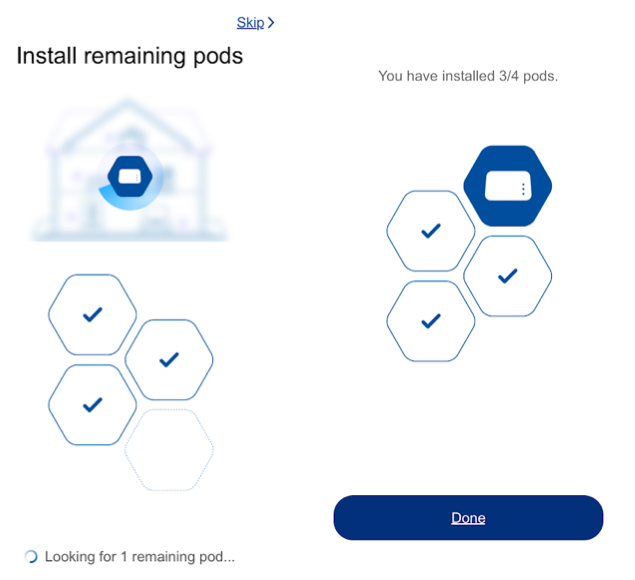 We still can’t get over how easy our evaluation pods were to install and configure. Because Bell’s pods come pre-configured to work with its Home Hub 3000 modem, you get to bypass two of the most annoying aspects of setting up other mesh solutions: There’s no need to plug a pod into the modem with an ethernet cable (an absolute requirement for all other Wi-Fi products), and no need to set-up Wi-Fi names, preferences, or passwords, even for the first pod. It’s completely automatic and works with whatever you’ve set up on the Hub. Now we’re not saying other mesh products are hard to set up — Google Wifi for instance, is an easy 5-10 minute process — but you simply won’t find one that’s as ridiculously easy as Bell’s pods.

After downloading the free app (iOS, Android) and signing in with your B1 number and password, you’re prompted to start plugging in your pods. As you plug each one in, it’s automatically recognized by the app, and configured to talk to the Home Hub. That’s it. Seriously.

You can take the extra step of giving each pod a name, which does help you to figure out which pod a specific device has connected to, but this is purely optional.

A bonus: The Home Hub 3000 continues to act as its own Wi-Fi access point, which means you’ll be working with a total of five mesh nodes.

Measuring speeds on a network is a tricky thing, even in simple environments. But measuring them in mesh network like Bell’s Whole Home Wi-Fi is almost impossible. That’s because the network is constantly changing and adapting to its environment. Bell tells us this one of its best features: The pods are constantly communicating with Bell’s cloud platform to determine the best way to shuttle ones and zeroes around your home. It takes a lot of factors into consideration, including distance to the device, the kind of device, what the device is trying to do, and how often it’s trying to do it. It’s a mixture of what’s known as band steering, and what Plume calls Auto Channel Hop. Thermostats will run slower than gaming consoles, but that’s by design: Each device on your network may experience different speeds, but they should always get the speed they need. For those of you with lots of Wi-Fi geek cred, you’ll be happy to know that Plume’s pods can make use of relatively congestion-free DFS channels too.

Does it work? Yes. To the extent that we could, we tested speeds on set top boxes like Apple TV, game consoles like the PS3, and PS4, laptops, smartphones, tablets, and smart TVs. Though the numbers varied wildly, from 18Mbps on the low end, to a bristling 280Mbps on the high end, only one thing mattered: We were never aware of any slowness while actually doing what people do with their networked devices, namely, watching Netflix, playing online games, streaming music, surfing the web, and checking video feeds from security cameras. It all ran without a hiccup, no matter where in our three-story-plus-basement house we did these things.

Some mesh networking routers go out of their way to offer value-added services to sweeten the deal. Securifi’s Almond 3, for instance, runs a full suite of IoT and home security tools, has Alexa compatibility baked-in, and even has an ear-piercing alarm that can be triggered by events you program. Bell’s Whole Home Wi-Fi is spartan by comparison, offering up only one handy tool: Parental control.

It’s not even an especially sophisticated tool. For each device on your network, you can grant or deny internet access based on four criteria: Until end of day, only on school nights, after bedtime, or indefinitely. The first and last options are self-explanatory, while the school and bed options let you configure exactly what these words mean in terms of times of day for your household. There’s no blocking of specific sites, or any content filtering for that matter.

One of the down-sides of the sophisticated nature of the network management that Bell is doing with the pods, is that you can’t maintain separate networks, as many people opt to do when using dual or tri-band routers. The Plume-based platform gives you one network name for your devices, and a separate guest network, but there’s no way to assign names to the bands themselves e.g. Simons-Home-5Ghz. Normally, if the network is being well-maintained, there should be no need to create separate networks, as every device will get exactly the bandwidth it needs. However, some devices, like the Awair Glow air monitor, and the Tivoli Model One Digital streaming audio speaker, prefer to operate on just the 2.4GHz band, and can behave erratically in mixed-band environments. We’d say this is a minor concern, but one to be aware of depending on the devices you own.

We do want to acknowledge the work that went into the app’s visual map of the network. You can see at a glance how the pods are connected to one another, and a single tap reveals which of these pods your devices are currently talking to. Even better: The app intelligently assigns matching icons for the devices it recognizes, and lets you quickly rename the devices that it hasn’t figured out. 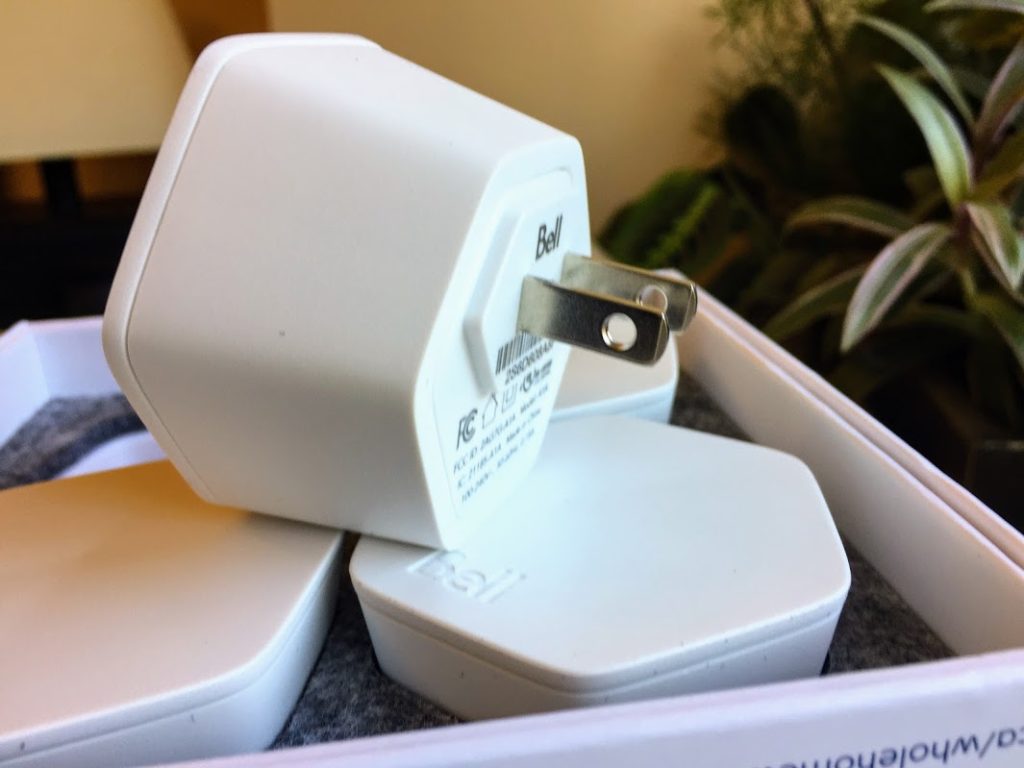 Until now, if you wanted a mesh Wi-Fi product, you had to buy one. Though prices vary with the brands and features, a $400 investment (for a three-unit Google Wifi system as an example) gets you decent coverage of a 2,000-3,000 square-foot home. At $5 a month, you could rent four of Bell’s Whole Home Wi-Fi pods for 80 months for the same total investment. You wouldn’t own anything at the end of those 80 months, but consider this: That’s over six years. Six years ago, there was no such thing as mesh Wi-Fi for consumers, and the current 802.11AC standard was still being finalized. A lot can change. Many of the Wi-Fi routers sold six years ago can’t keep up with today’s demands.

There’s no guarantee that Bell will continue to upgrade its Wi-Fi product, or that it will let you swap out your system for the latest and greatest, but then again, you aren’t locked into a contract either, so if you decided to invest in your own system, you could do so anytime you liked.

Beyond the cash question is perhaps a much more important consideration: Tech support. You may have strong opinions about what it’s like to call up your ISP when you need help, and we certainly feel your pain — we’ve heard all of the stories and experienced many of them. But there’s something to be said for the ability to call Bell, and know that they own 100 percent of your connectivity solution, from the line that feeds internet to your home, to the modem that manages it, to the mesh Wi-Fi that distributes it to your devices. Bell’s reps won’t be able to pass the buck in the event of a problem and foist the blame on the company that made your mesh Wi-Fi, because it’s their mesh Wi-Fi.

In fact, creating a mesh Wi-Fi product like these pods, is as much a defensive move on Bell’s part as it is a play for additional revenue. Bell knows that customers already consider them fully responsible for their home’s connectivity, so why not own it? With a fully Bell-managed solution, there ought to be fewer problems, and when problems do arise, they should be easier to fix. For Bell, it’s a no-brainer. 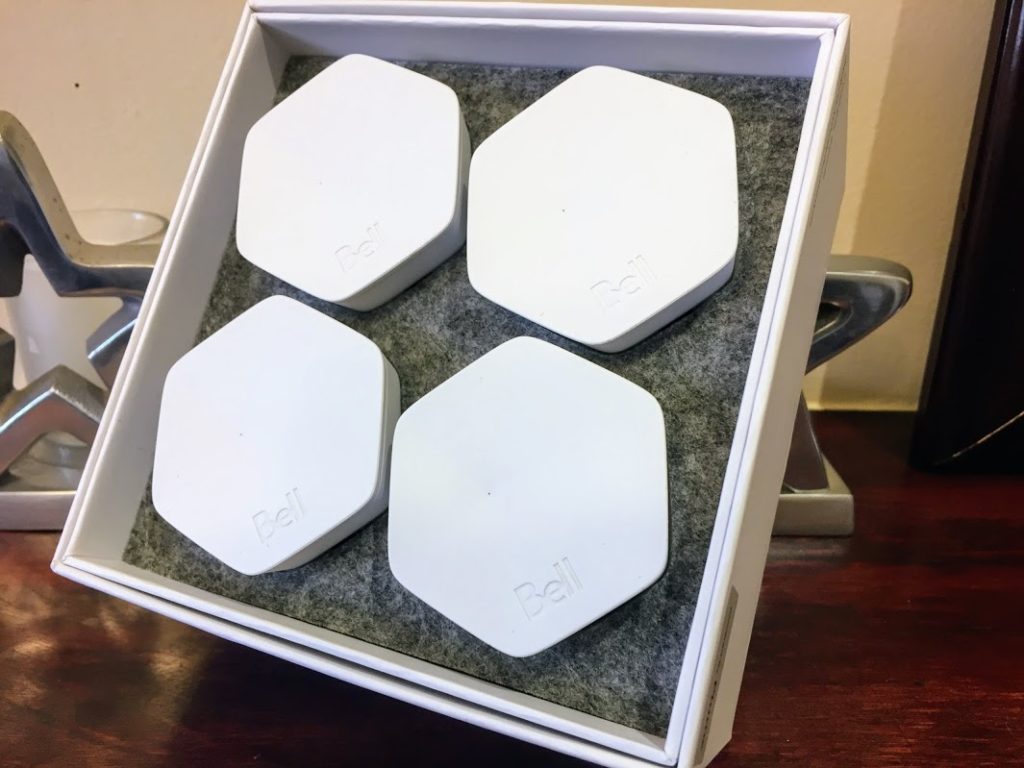 Should I get it?

In a word, yes. If you’re already a Bell internet subscriber and haven’t been very happy with the Wi-Fi coverage and speed in your home, we strongly recommend Bell’s Whole Home Wi-Fi pods. Though not feature-rich like some other mesh Wi-Fi products, they couldn’t be easier to install and use, and most importantly, they provide seamless and fast Wi-Fi coverage for most small to medium-sized homes. Adding coverage for larger homes by renting more pods, is just as easy. For the average consumer who just wants their Wi-Fi to work, and who never wants to hear that it’s someone else’s problem when things do go awry, it’s a nearly perfect solution. For an extra $5 a month, that’s very appealing.

If you aren’t a Bell subscriber, well, this system won’t really be an option unless you switch. If you’re happy with your ISP, and have no lingering concerns about your Wi-Fi, we don’t think Bell’s Whole Home Wi-Fi product is reason enough to jump ship. But, if you’ve been considering a change anyway, it’s more than enough reason to seriously consider Bell’s offering before making your decision.