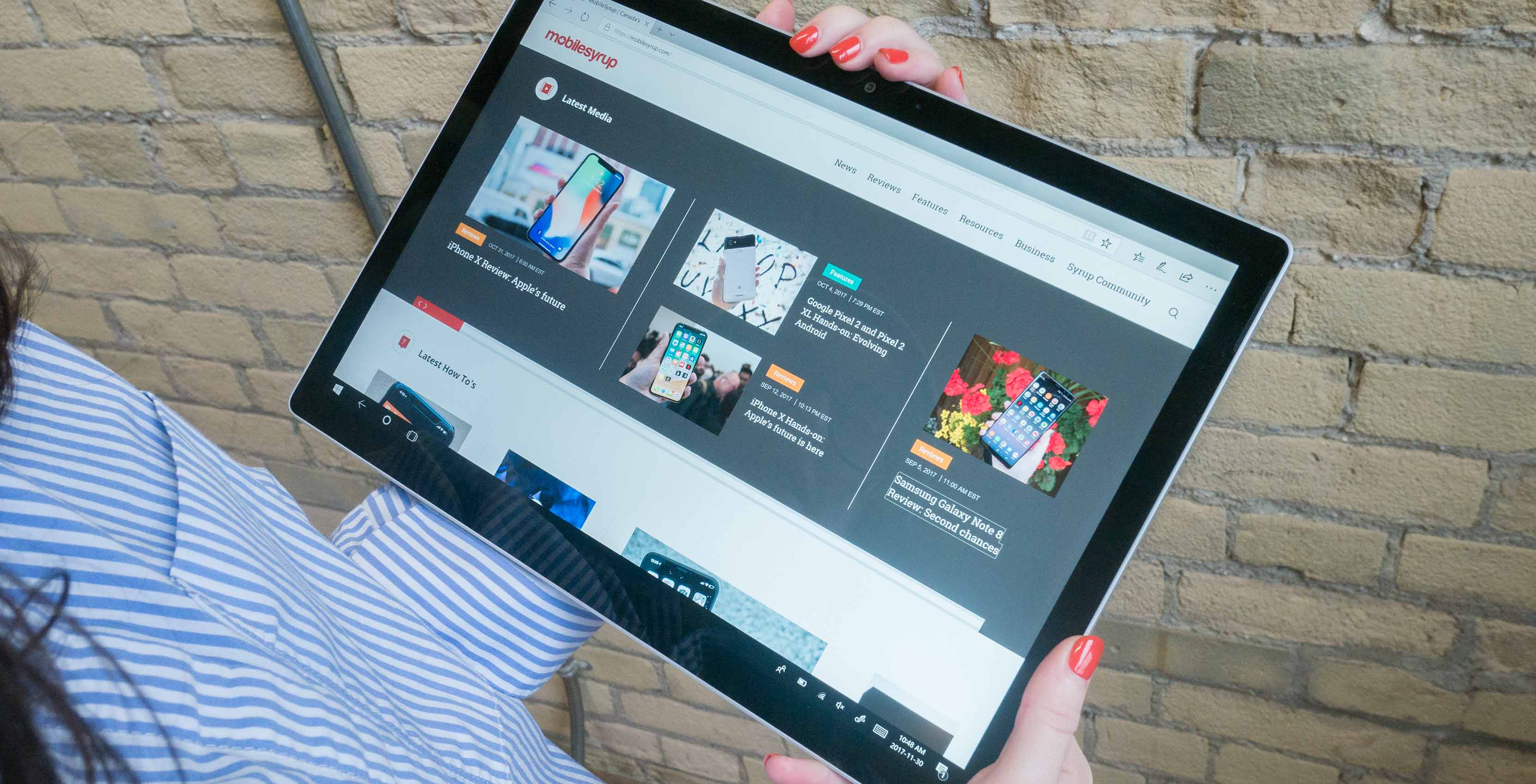 The 2016 Surface Book with Performance Base was one of my favourite laptops ever, so I had high expectations going into my review period with the Surface Book 2.

I loved the 2016 Surface Book for its robust battery life, strong performance with labour-intensive apps and neat, minimal look. The Surface Book 2 — the first major iteration on the Surface Book — kept those elements and enhanced them just enough to make a successful follow-up to an already great device.

Safe to say, my expectations were well met.

It’s a powerful beast with enviable battery life that looks the part of a modern, premium laptop. Having said all that, it’s not perfect. As with any device, there’s room for improvement (particularly as it pertains to form factor) and it carries a hefty price tag, starting at $1,979 CAD.

After spending several weeks with the $3,849 CAD top-of-the-line variant — Core i7, 16GB RAM variant and 1TB of storage – here are my thoughts on Surface Book 2. 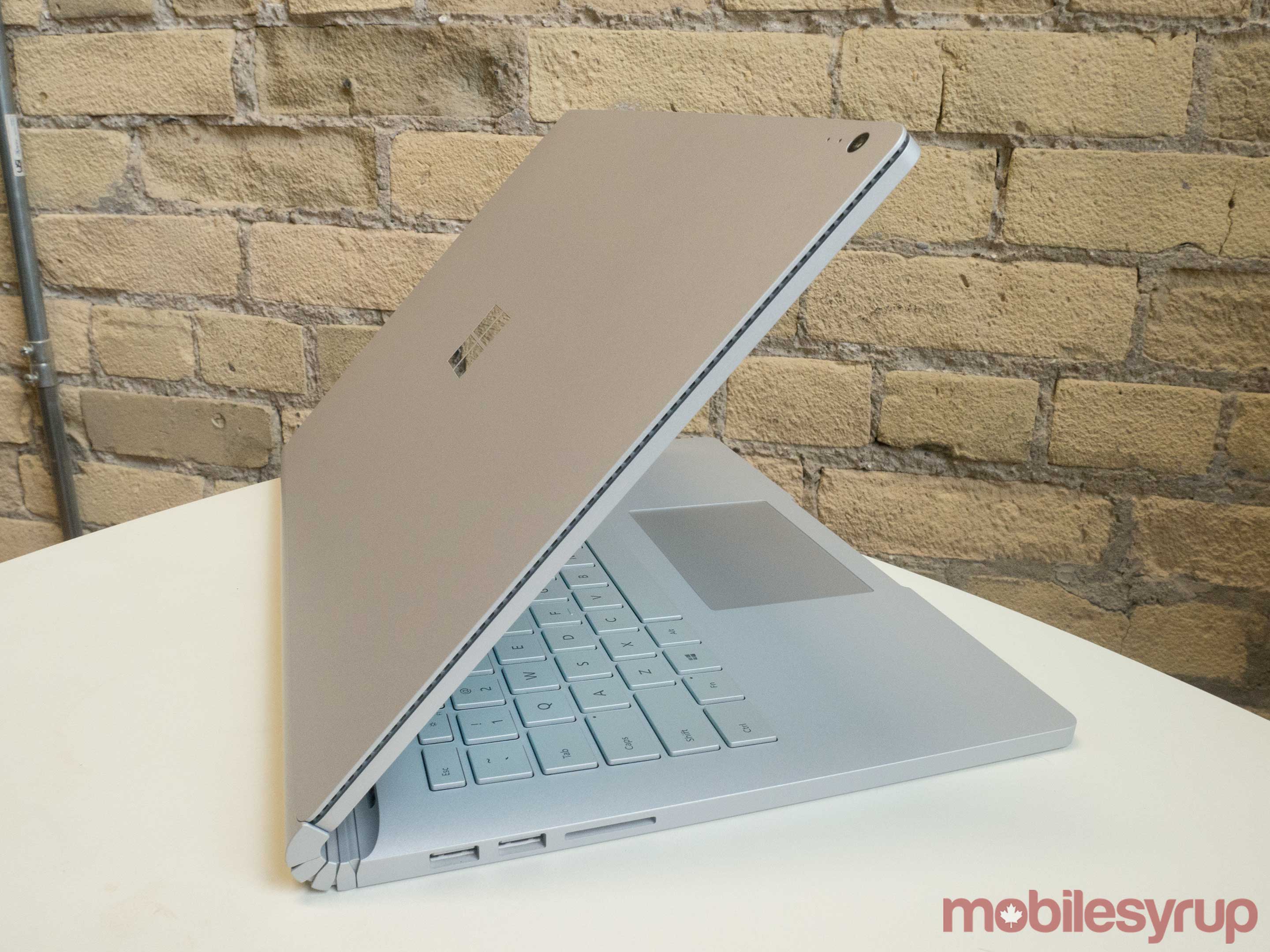 As much as I like the Surface Book 2, the one design change I’d like to see is drastic: I’d alter the form factor.

Over the course of my time with the Surface Book 2, a lot of people gave me their strident opinion about the Surface Book line, but one of the things that came up most often was screen wobble.

Because the Surface Book 2 is a detachable, its display is perched on top of a hinge with a fairly short range of rotation. Especially with the first Surface Book, this position was precarious, causing frustrating amounts of wobble and the occasional accidental detachment.

Wobble was never a serious issue for me with the 2016 Surface Book, nor has it been when using the Surface Book 2, but it wouldn’t be a consideration at all if Microsoft decided to attach the display and make the hinge rotate fully to the back, like a Lenovo Yoga device.

The attached 2-in-1 form factor just makes sense; no wobbly displays, easy manipulation of screen angle and multiple form factors, including tablet. In fact, it would’ve made sense for the lightweight Surface Laptop, as well, which simply eschewed 2-in-1 capabilities altogether. 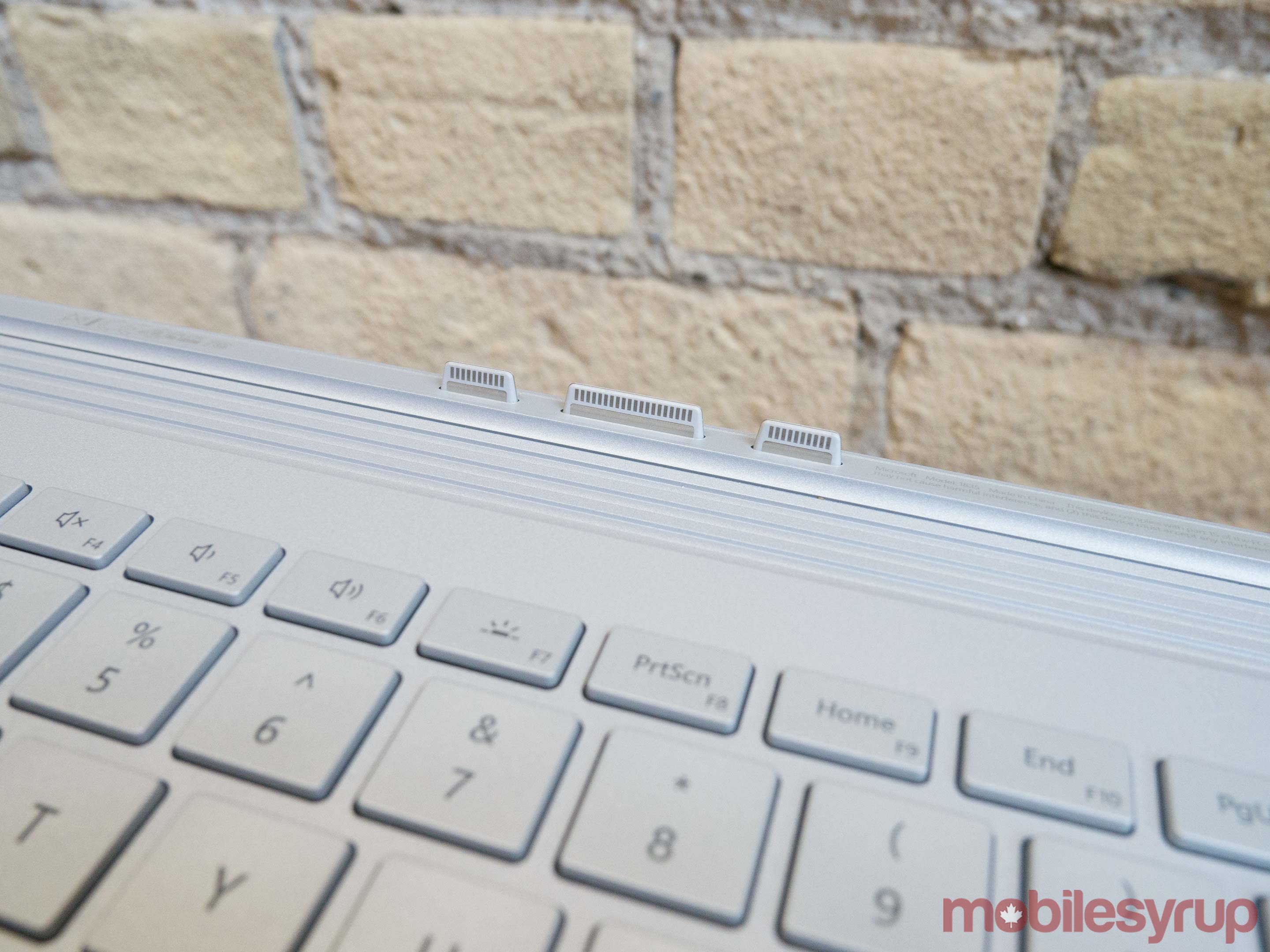 Considering Microsoft ushered in the era of the 2-in-1, these form factors are certainly head scratchers.

But I’d like to reassure those who may’ve purchased an earlier, wobblier Surface Book – the Surface Book 2 is sturdy and dependable.

According to Microsoft’s Surface head Panos Panay, that’s because the hinges are completely re-designed. In an interview with Engadget, he noted that Microsoft uses a small ceramic part together with muscle wire to keep everything steady.

What’s more, it has about 10 degrees more rotational range than the previous iteration, allowing one to push it back to roughly around a 110 or 115-degree angle.

This is a welcome change. The display hinge’s lack of range was one of the few things that consistently bothered me about the 2016 Surface Book. While it’s still not ideal, the form factor is now much easier to manipulate.

In terms of actually using the device as a tablet — the value of having an enormous Windows tablet at my disposal still doesn’t make sense to me. Detaching and re-attaching the tablet is a simple process, though, for those who are interested in tablet use. 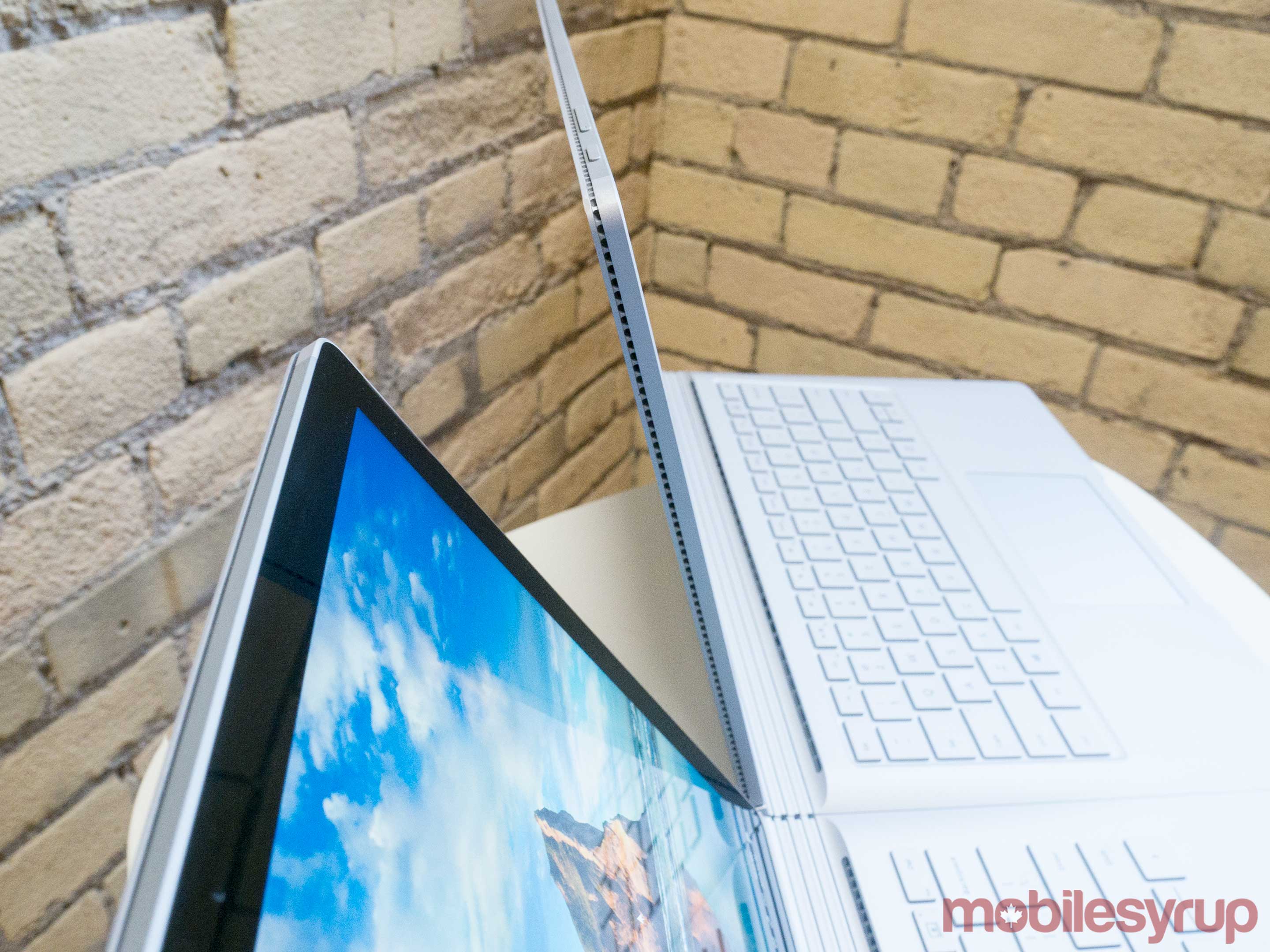 Aesthetically, very little has changed from the 2016 Surface Book which, in this case, is good. I love the clean, matte light grey of the Surface Book and its minimal reflective windows logo. Others do, too. I’ve actually had strangers come up to me to ask about the Surface Book 2, intrigued by its look.

It’s still hefty, though, especially the core i7 variant. It comes in at 3.62 pounds, while the core i5 variant is 3.38 pounds. Either way, for many of the people I spoke to about the Surface Book 2 — that’s too heavy. It’s heftier than the 13.9-inch Lenovo Yoga 920, which starts at 3 pounds, and the latest MacBook Pro, which comes in at 3.02 pounds.

But that’s not a major issue for me. Sure, it would be nice to have a lighter laptop in my bag or backpack, but it’s still easily portable, and I never found it held me back from carrying it with me on any given day.

Besides, I’m more than willing to carry around a laptop on the heavier side if it gives me enough battery life to make it through almost an entire working day, and is powerful enough to handle whatever game or processing intensive application I throw at it. And the Surface Book 2 can do just that.

As for inputs, the 3.5mm headphone jack is still, unfortunately, at the top right of the device – another downside of the detachable form factor. Up top on the left is the power button and volume controls, both of which one rarely finds use for.

There’s also two USB-A 3.1 ports, a full-size SD card slot (a win for those fighting off the dongle life), a USB-C port and a magnetic Surface Connector port for charging, which, for the record, works very well. 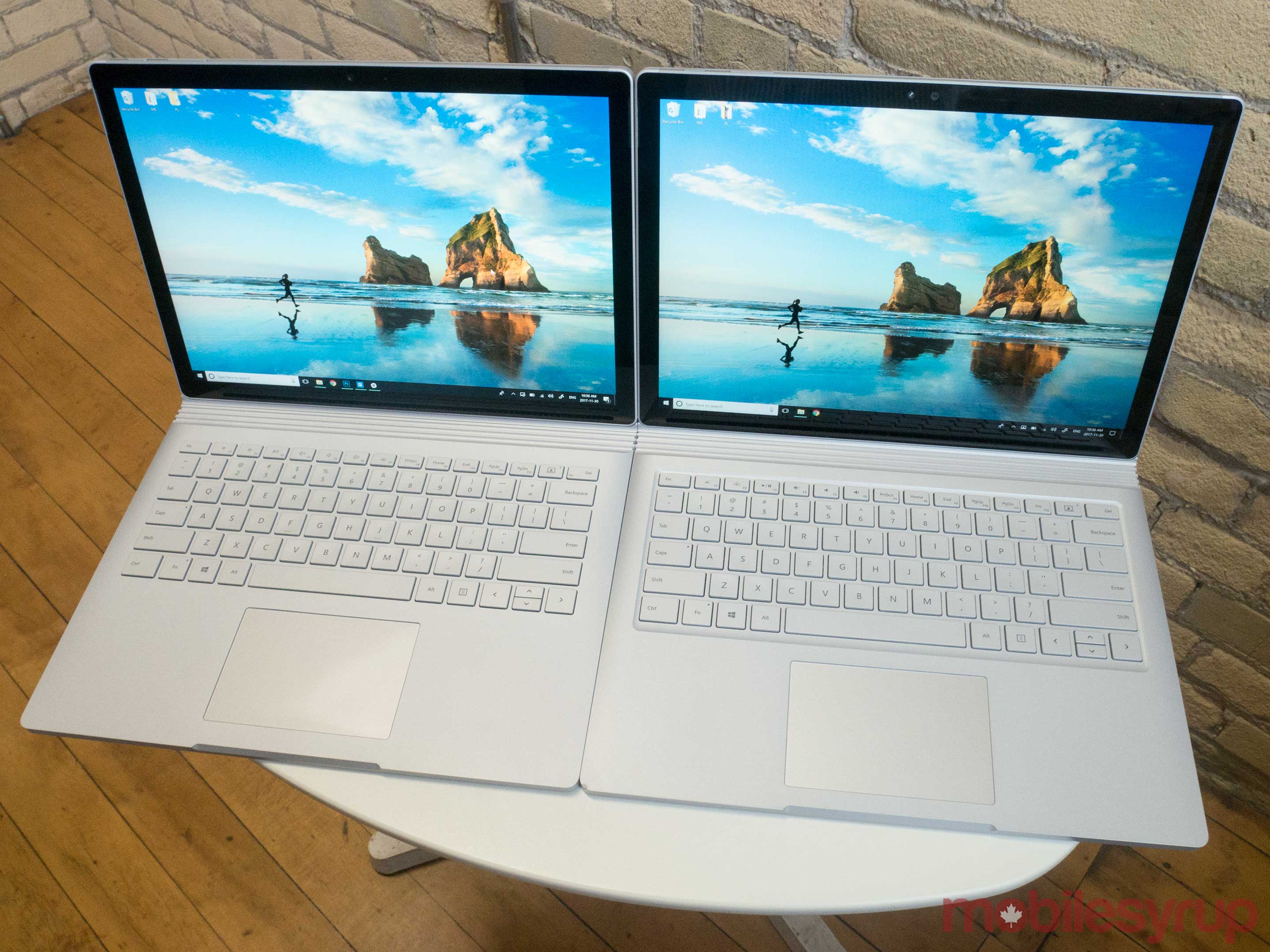 The Surface Book 2’s 13.5-inch, 3000 x 2000 pixel display is bright, crisp and well-saturated — if a little on the warm side — making watching video and playing games a pleasant experience.

It would’ve been interesting to check out a slightly new form with the 15-inch model released in the U.S., but here in Canada we’ll have to make due with just the 13.5-inch display.

Personally, that’s my preferred size for portability, but for the more dedicated gamer or entertainment-focused user, I could see the 15-inch model being a better choice.

The display shares the 3:2 aspect ratio of its predecessor, making it ideal for multi-tasking using the Snap Assist feature, which snaps windows to each side or corner — one of my favourite parts of running a Windows operating system.

Windows 10 plays a significant role in my enjoyment of the Surface Book 2, in fact. I love the intuitive ‘stock Windows’ experience on the laptop, and the lack of frustrating bloatware clogging the system.

Cortana also works well, though it’s still second nature for me to turn to my apps and browser for answers, not an AI — especially on a laptop, which is more easily navigable than a smartphone. 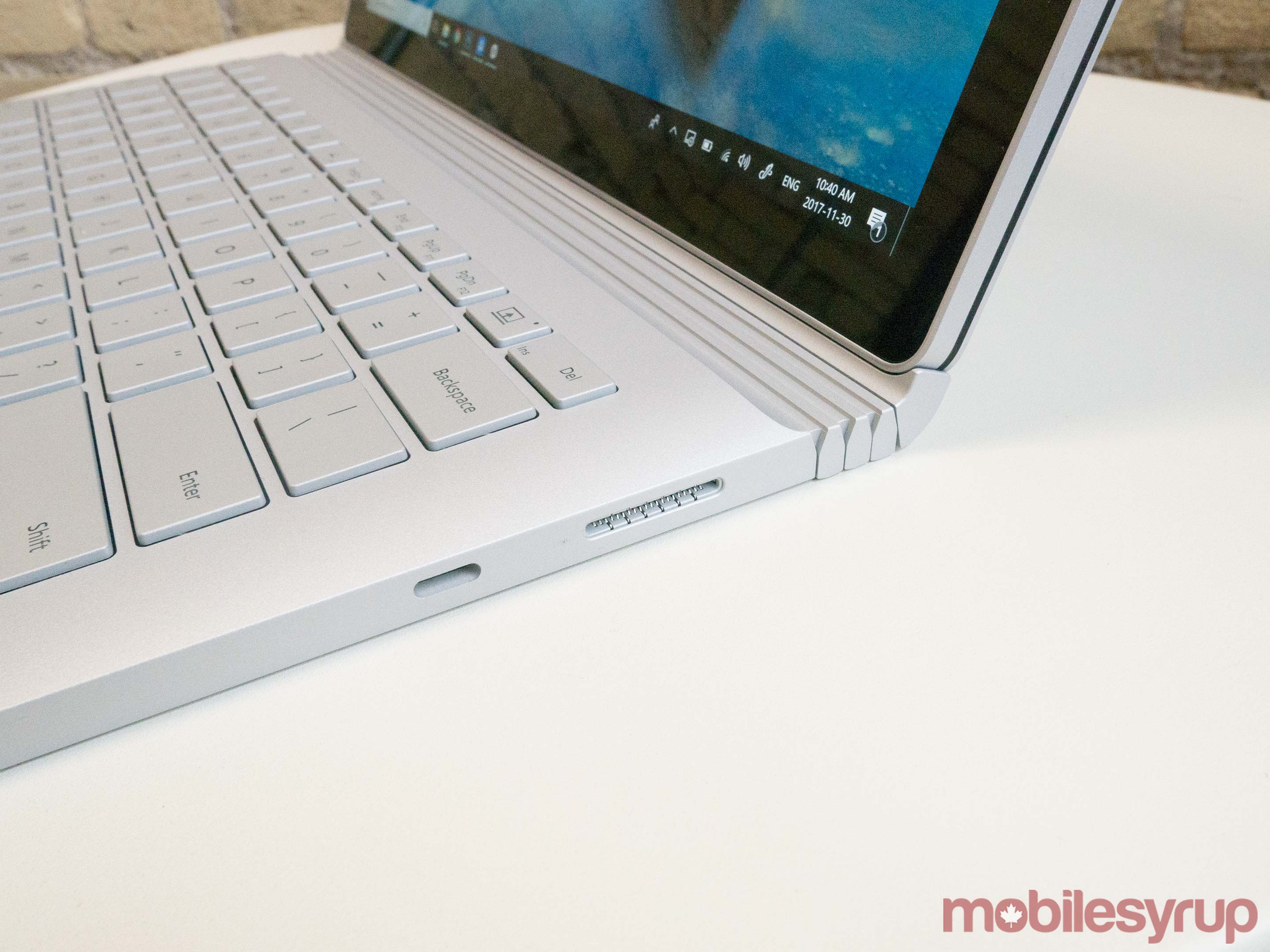 Under normal use, which includes frequent use of Photoshop, web browsing, video streaming and Office apps, I can generally get about six hours of battery power.

At recent press events I’ve attended, I’ve been able to proudly flaunt my battery life as my peers desperately seek power outlets. I rarely worry about power on extended plane trips. In the office, I’m never stuck at my desk next to the plug. Overall, the Surface Book 2’s battery life offers a fantastic experience.

Plus, when I do actually need to plug in, the charging process is fast and efficient. 40 to 50 percent charge usually takes about an hour.

I didn’t experience the battery drain issue that was a problem for some early users, with the battery discharging even while plugged in. Microsoft previously explained, however, that this happens only in “some intense, prolonged gaming scenarios with Power Mode Slider set to ‘best performance.’”

In my experience playing The Witcher 3: Wild Hunt, gaming performance was smooth and quick enough for my liking on a much lower battery mode (a third of a way across the slider), while setting it to best performance caused an unpleasant racket from the fans that somewhat overpowered the sounds of the game.

I found at the lower battery mode setting I was routinely able to get an about 55fps framerate, which was more than zippy enough for me.

The fans didn’t seem to come on – or at least not at that force – when doing other somewhat intensive tasks such as photo editing. Even without them, the Surface Book 2 did a much better job of keeping cool than the 2016 Surface Book, which itself didn’t have a serious overheating issue.

With the Surface Book 2, I found that even after two hours of playing The Witcher 3, the machine was barely warm. 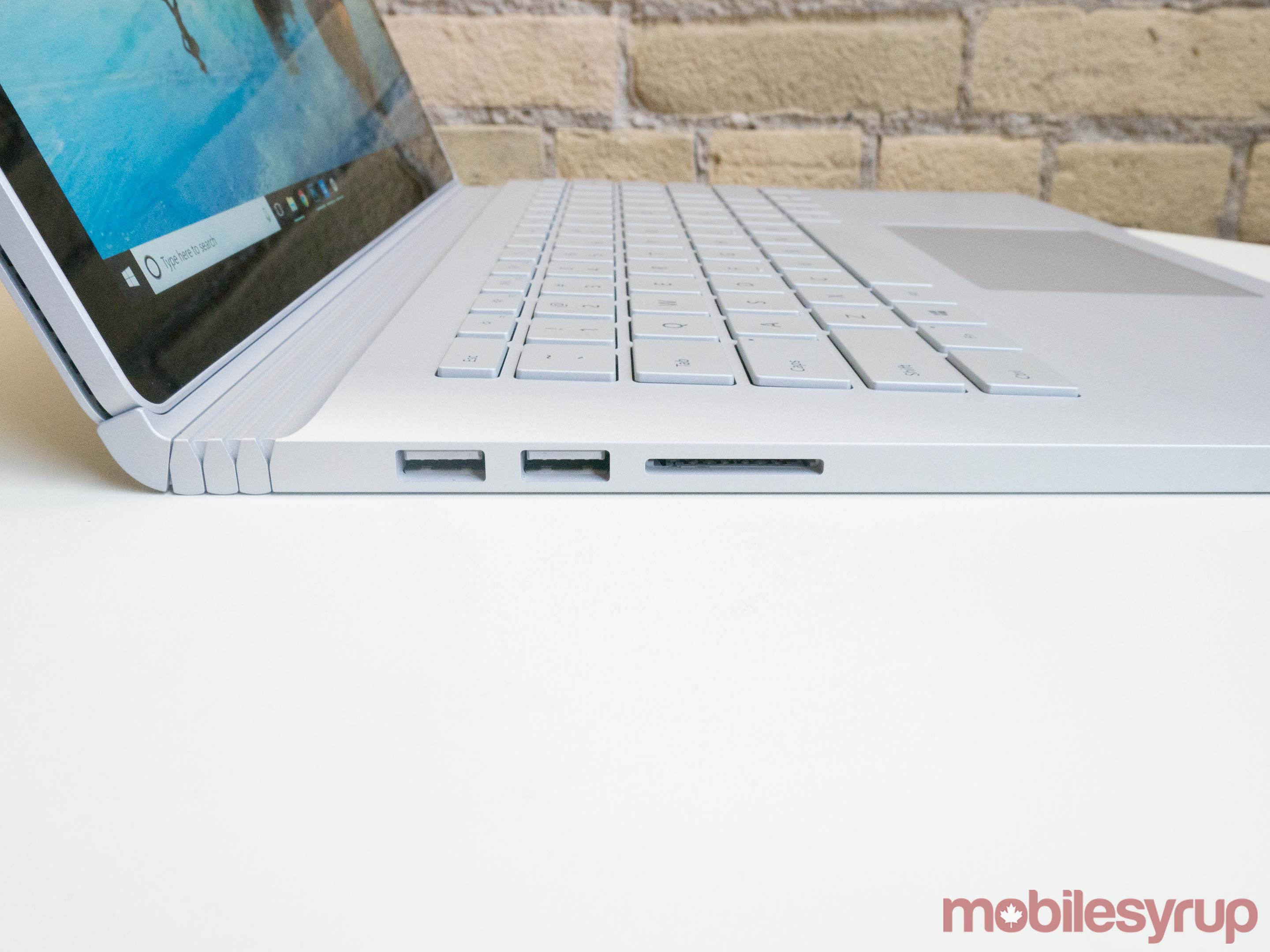 Delving deeper into performance, I have to rack my brain for any complaints – I didn’t experience any slow downs or stalls even when multi-tasking and using Photoshop or gaming.

I’m certain those who have similar medium-to-demanding needs for processing will find this laptop fits their needs. Granted, I haven’t been able to try VR using a Windows Mixed Reality headset yet or played games with more demanding graphics than The Witcher 3. For use as my daily work driver and occasional gaming laptop, though, it’s perfect.

The only real performance issue I had was related to connectivity — like the 2016 Surface Book before it, I found the 2-in-1 has a tendency to fall off Wi-Fi easily in comparison to my closest co-workers’ 2016 MacBook Pro, though it didn’t happen frequently enough to become problematic.

Rising to the surface

On the face of it, this isn’t the most exciting update on the already-stellar Surface Book line, but it might be the one that popularizes these devices in the mainstream. The small but meaningful enhancements came together to produce a laptop that more than challenges the latest 13-inch MacBook Pros and similar competitors.

With its power, impressive battery life and sturdy yet elegant appearance, I have no qualms in giving the Surface Book 2 a hearty recommendation. In my opinion, this is the Windows laptop to beat.

"This is the Windows laptop to beat"