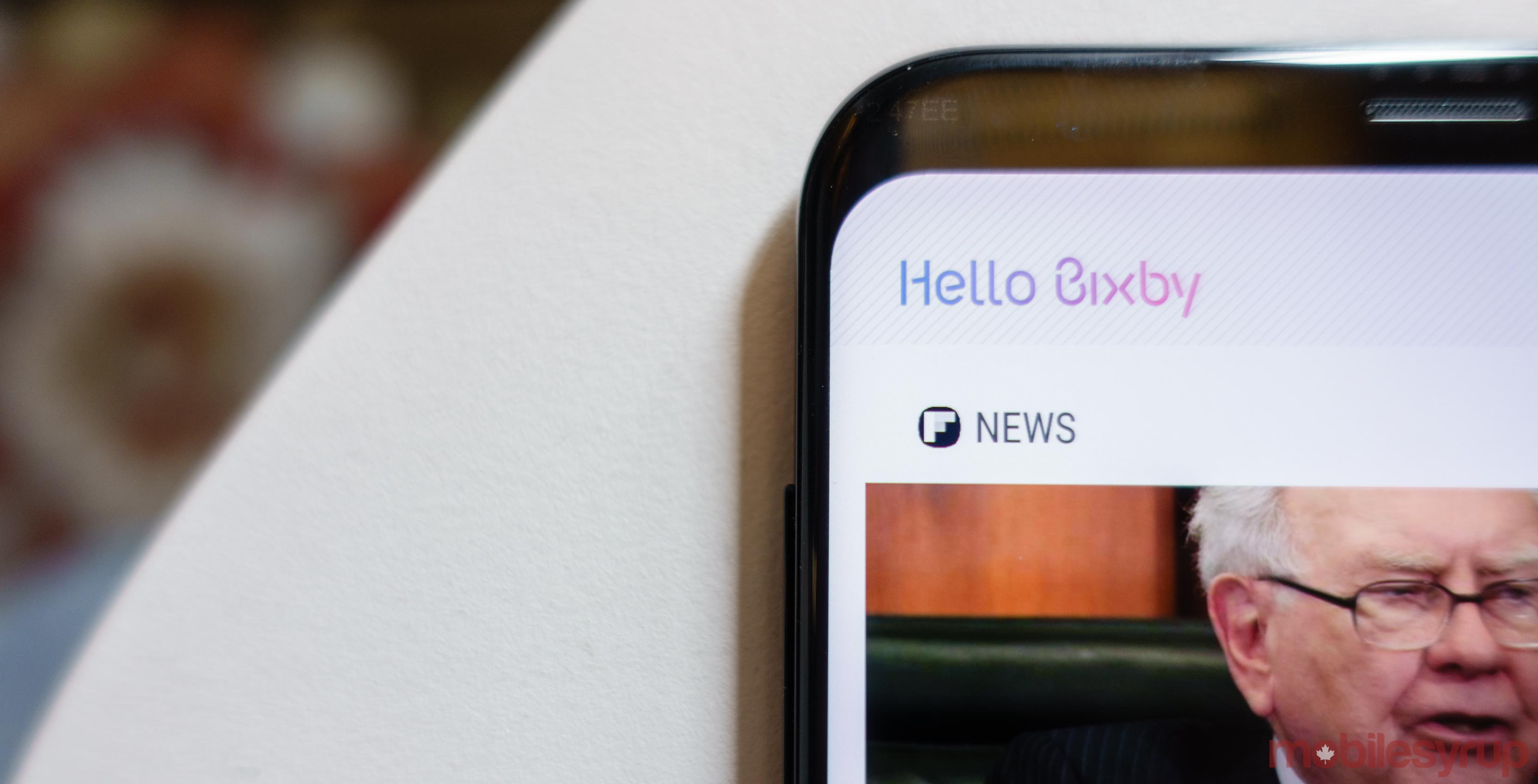 If there’s one reason to love the Google Assistant, it’s that it responds to contextual cues.

You don’t have to tell it to open Google Maps and provide directions to Toronto’s Union Station, you can just tell it “Take me to Union,” and it’ll use your location to chart the fastest course.

It’s intuitive, and it’s one of those technologies that just works. When you ask the Google Assistant a question, or tell it to do something, it more often than not knows what you mean and does what you want it to do.

The same, however, can’t be said for Samsung’s Bixby Voice assistant, which officially launched on the Galaxy S8 and S8+ in Canada yesterday.

More often than not, you can get Bixby to do exactly what you want it to do. Getting there, however, feels quite a bit like trying to accomplish a task using computer code. You can make it work, but you have to be very specific.

The first thing you notice when you launch Bixby — whether through the dedicated Bixby button on the side of the phone, by swiping left on the homescreen, or simply saying “Hi Bixby” — is how closely it resembles the Google Assistant interface. 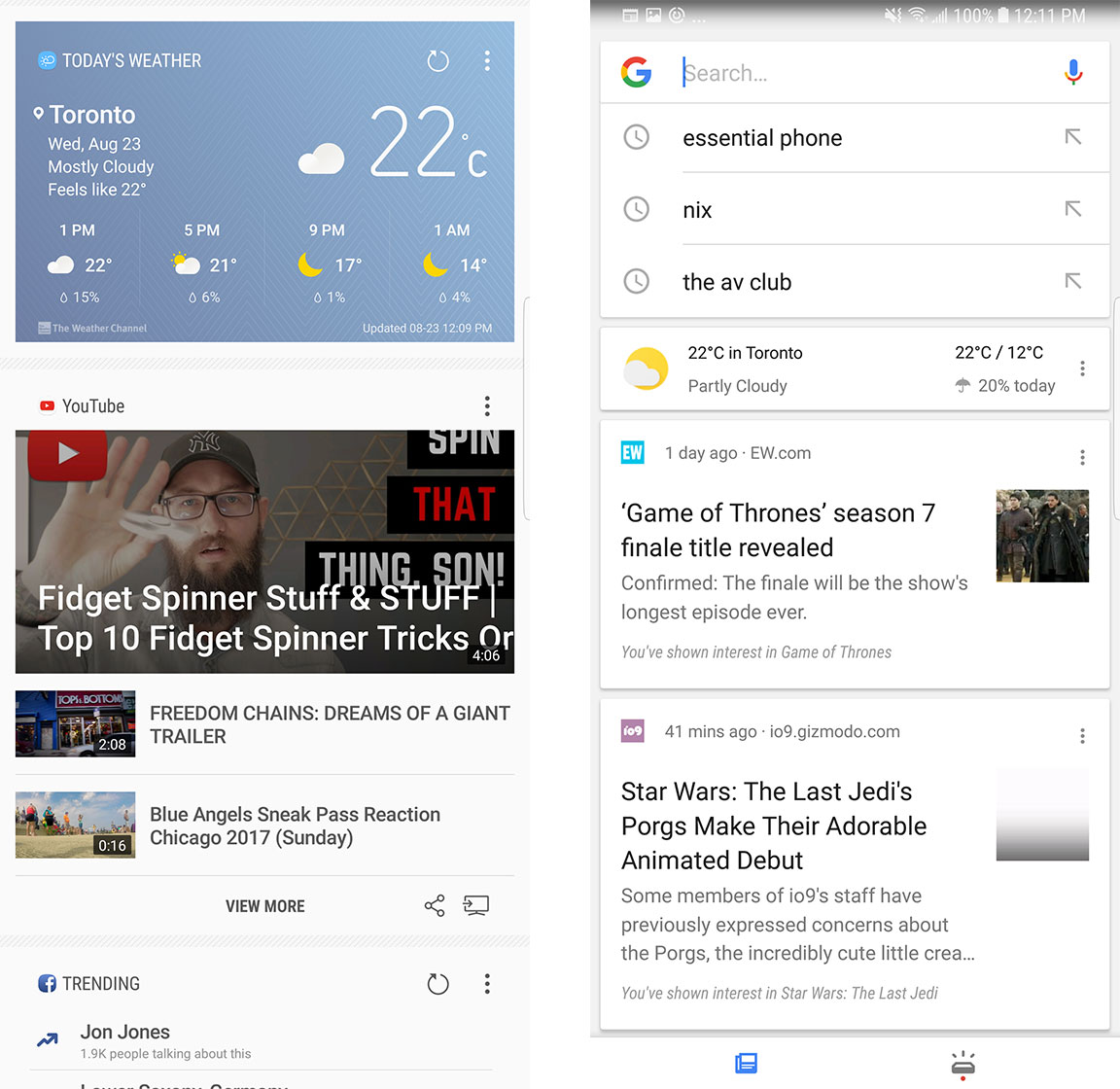 The only major difference between Bixby and the Google Assistant is that Google Assistant can’t be programmed to the Bixby hotkey. However, that’s true for every app; you can’t launch anything other than Bixby with the hotkey.

Quickly tapping the Bixby button brings up the Hello Bixby page with all the cards. Holding down the button launches a Bixby icon on the bottom of your screen. It’s here that you can use voice commands to ask the assistant to schedule appointments, send messages and launch various apps. 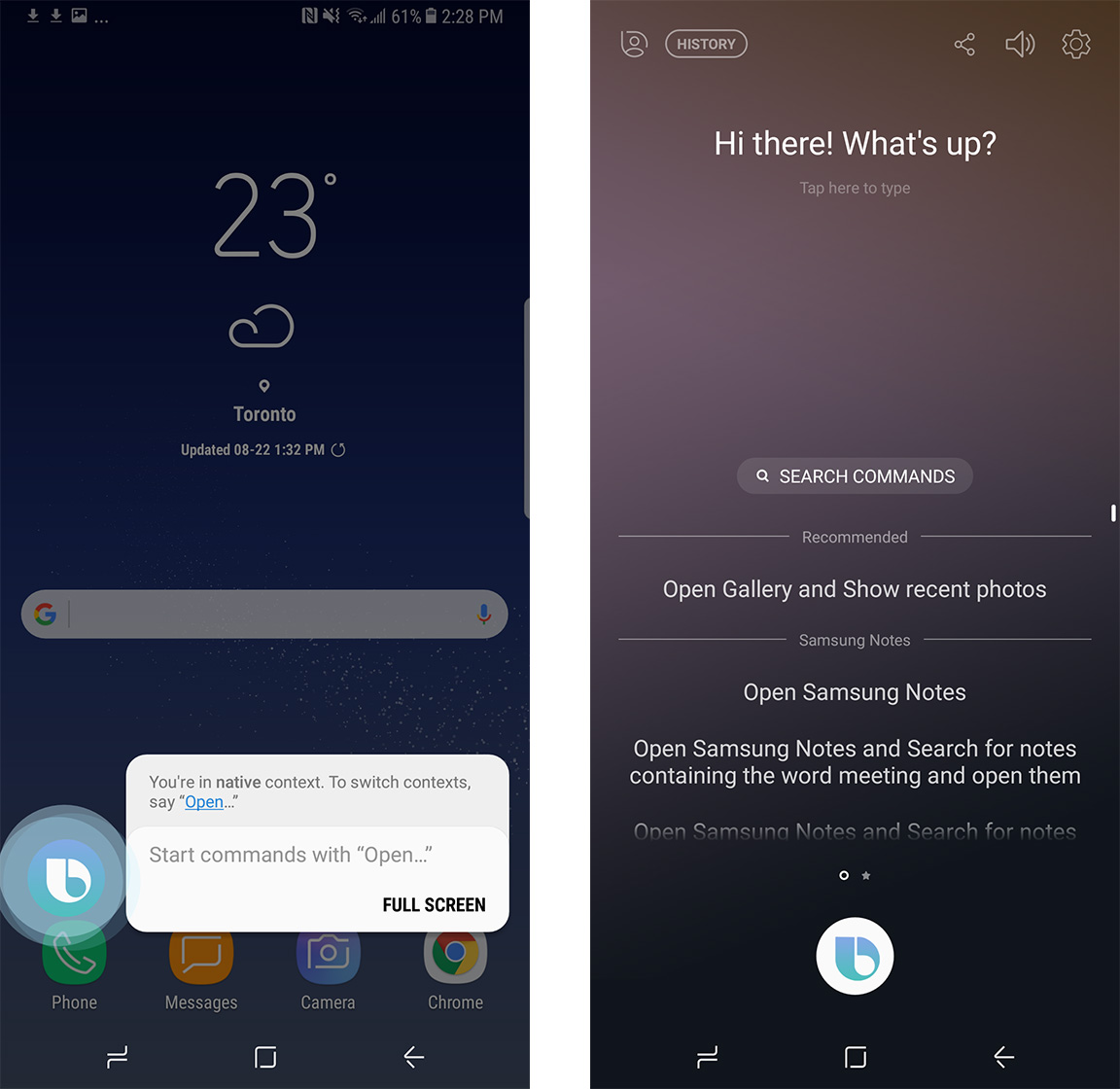 This part of Bixby more closely resembles Siri, and just like early iterations of Siri, you have to be precise with your words. If you’re not, Bixby will gladly let you know that it has no idea what you’re trying to get it to do.

“Take me to Union Station” doesn’t work as a voice command with Bixby. In fact, I’m still not really quite sure how to get Bixby to take me to Union, because every combination of commands I tried elicited either a happy “Looks like I’m not able to do that” or something not quite related to my query. 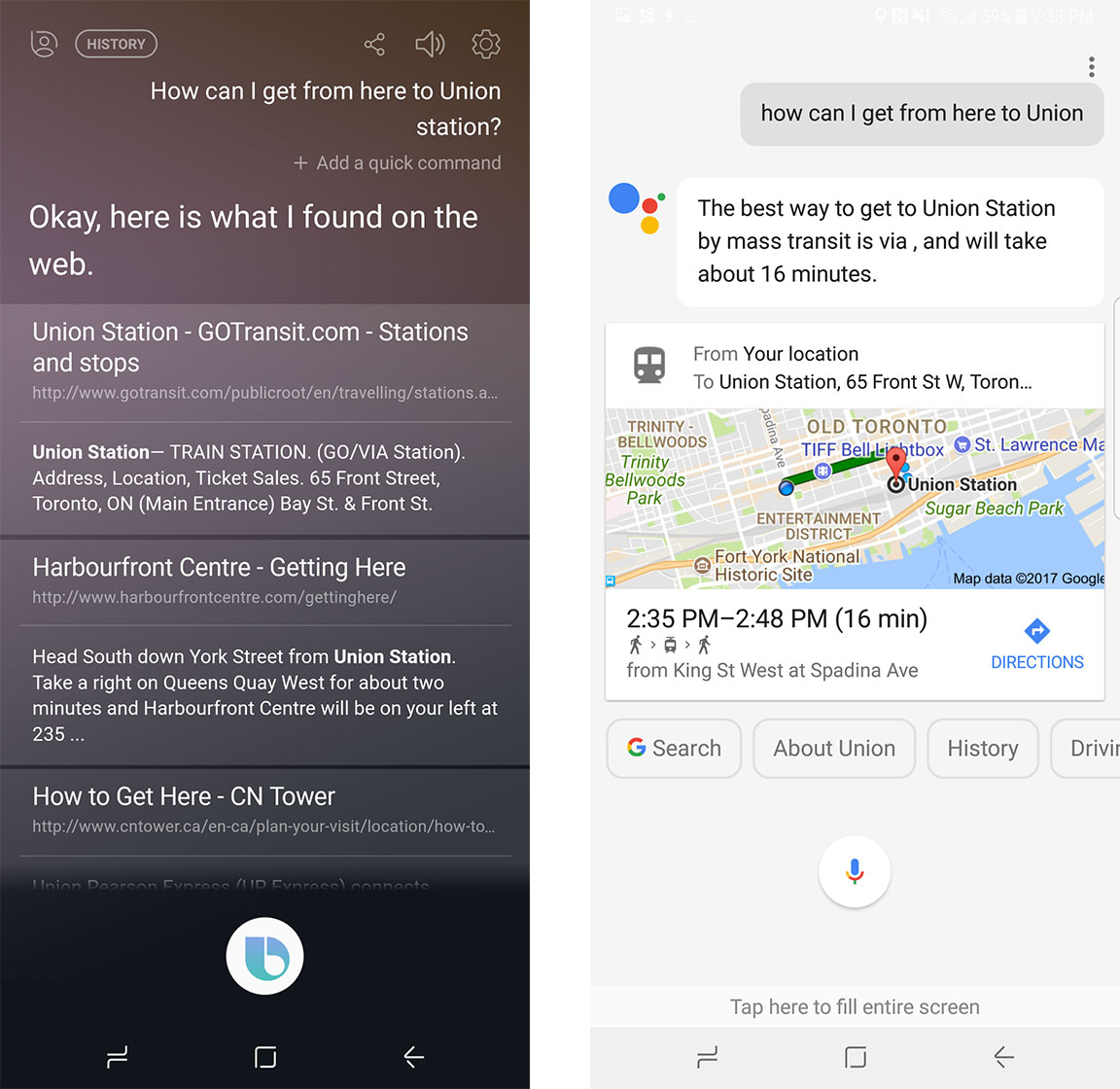 If you follow Bixby’s approved list of commands, however, it will usually do what you want it to do.

What can Bixby do?

That being said, if you ask Bixby to launch an app that you know is definitely on your phone, you still sometimes run the risk of having the assistant tell you that it can only do that once you download it from the Google Play Store or the Samsung App Store.

No, seriously. I asked Bixby to launch Gmail — an app that I knew worked on the Galaxy S8+ I was using — and it told me that I needed to download it from the Play Store, even as I looked right at the icon on the homescreen.

Further complicating the situation, Bixby doesn’t work with all non-Samsung apps, including Spotify. Samsung said that Spotify support will be coming to Bixby later this year.

I also encountered some difficulties with Bixby’s other notable feature, which gives users the option to take images and use Bixby to provide contextual information about the products or items in the image. 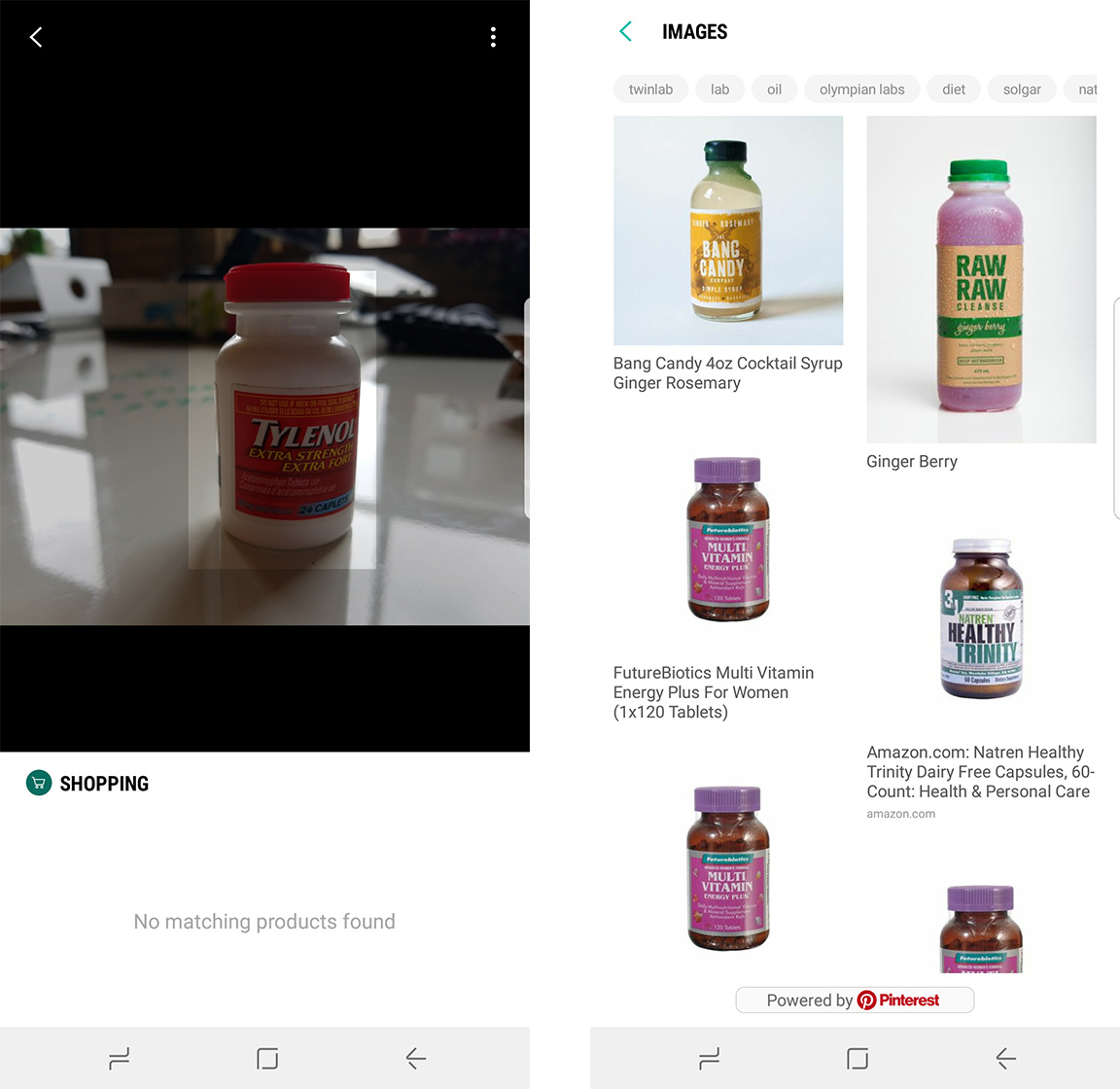 In theory, this means you don’t have to go to the trouble of typing in “Frosted Flakes” once you’ve navigated to Amazon’s website. In application, however, Bixby came up short. 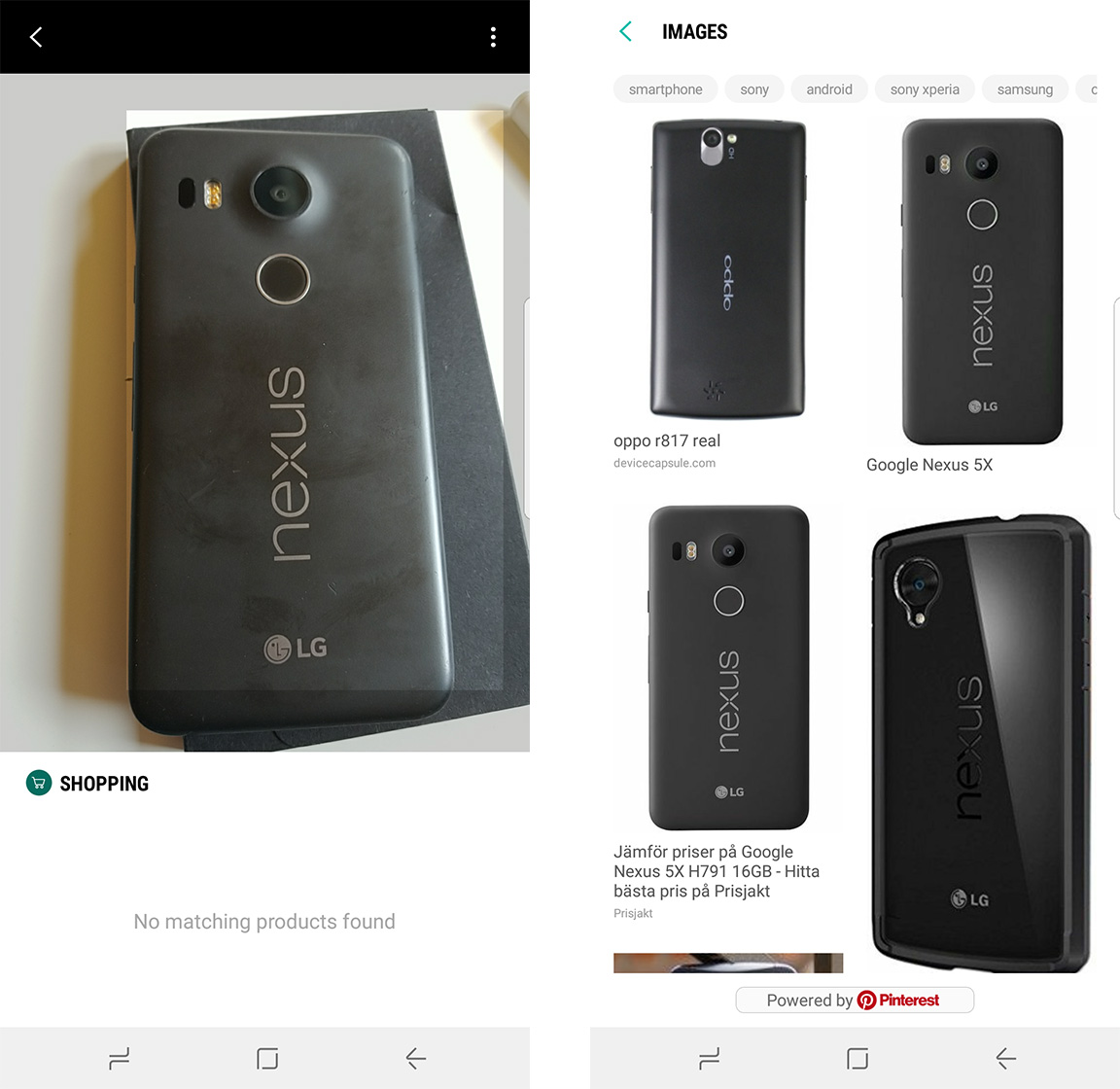 I even took a photo of the back of a Nexus 5X, with the LG and Nexus branding clearly visible, and Bixby was only able to identify the phone in the images menu.

A spoonful of sugar to help the medicine go down

It’s important to remember that the first versions of every major virtual assistant — including the Google Assistant — were choppy.

There was a time not so long ago that asking Siri to do anything beyond looking up the Prime Minister of Canada was more of a hassle than it was worth, and even then it still sometimes refused to say who was in charge, instead choosing to link to the Wikipedia page of all the Canadian prime ministers. 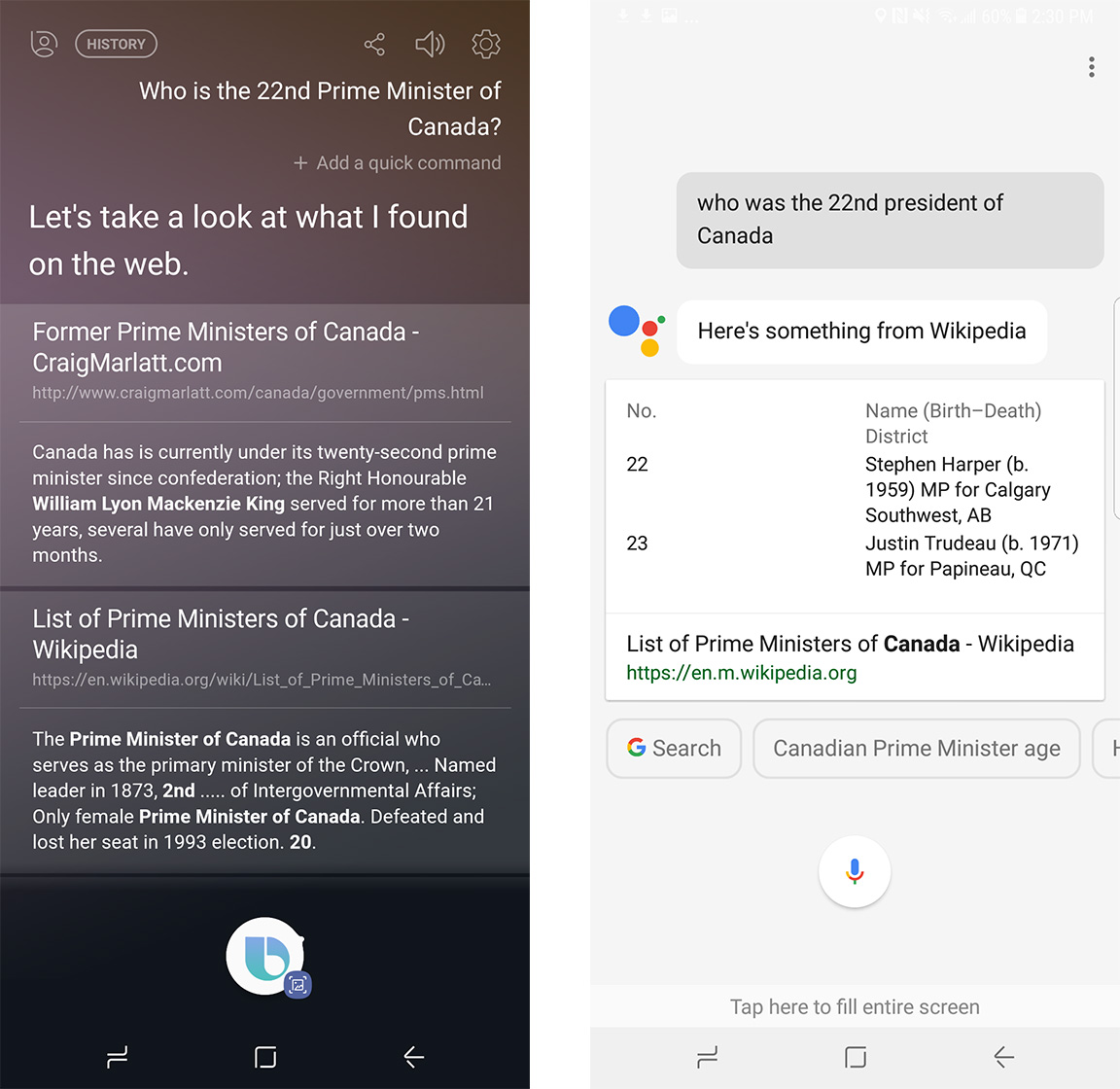 All of this is to say that Bixby’s still in its early days, and while there’s a lot of room for improvement, when the assistant works, it really does work.

Bixby’s card view still provides clear and useful information. In the case of its trending menu — which I suspect is sourced from social networks as well as search engines — it’s actually a little bit more useful than the Google Assistant. Whereas Google usually provides trending news generated based on previous user searches, Bixby produces a blend of stories that are interesting to the user as well as stories that are trending worldwide.

Additionally, it’s important to note that Samsung does package the Google Assistant with its devices. If you really don’t think Bixby’s useful, Google still has your back.

And while I wait for Samsung to fix some of Bixby’s issues, I’ve found a happy compromise between Samsung’s and Google’s assistants. I’ve been using Bixby to catch up on interesting or important stories, and I’ve been using Google to set up calendar appointments and give me directions. 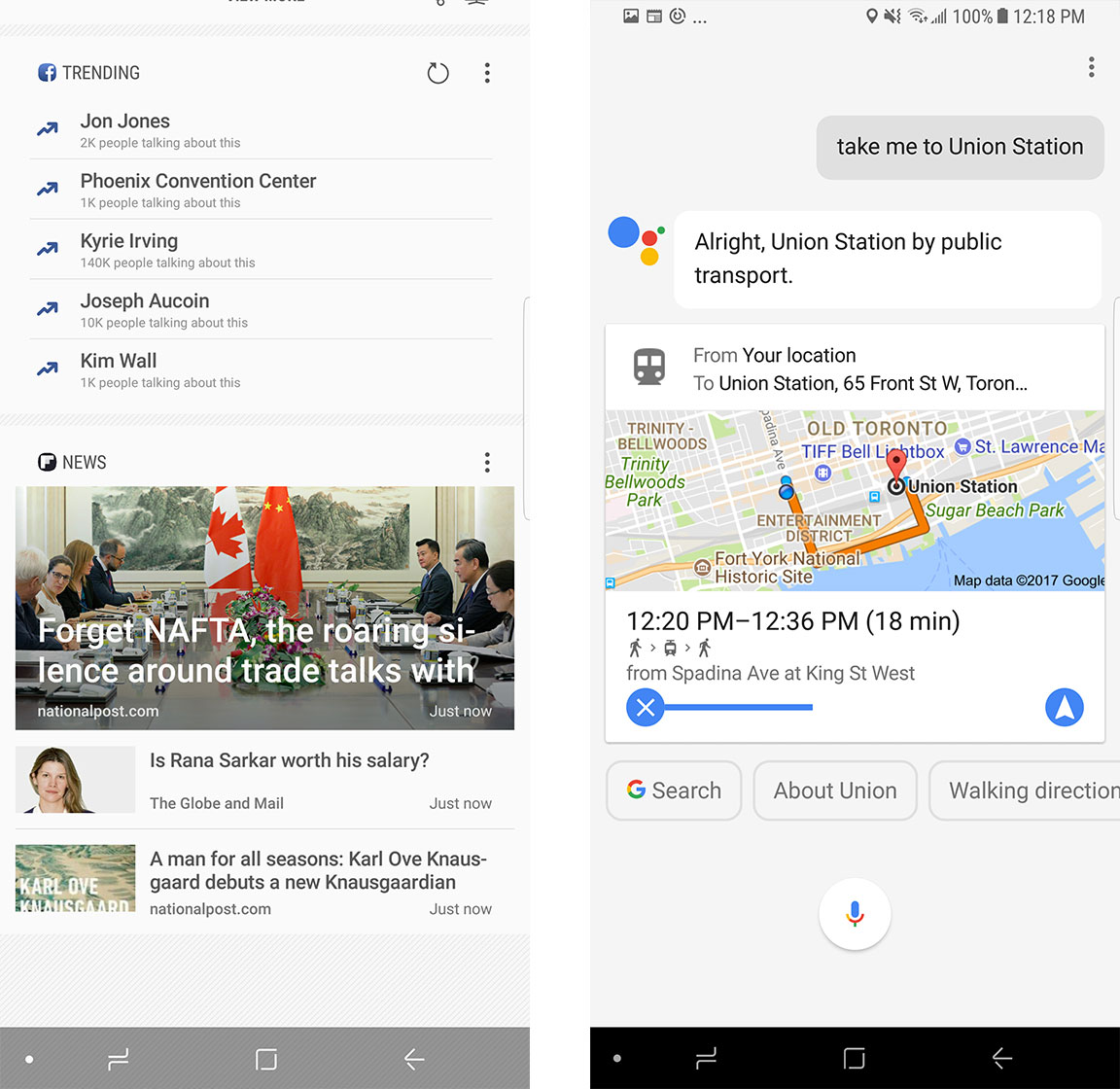 Which means that, yes, I did eventually manage to find my way to Union Station — I just asked Google to do it.