Nissan ProPilot Assist Hands-on: Not quite autonomous yet 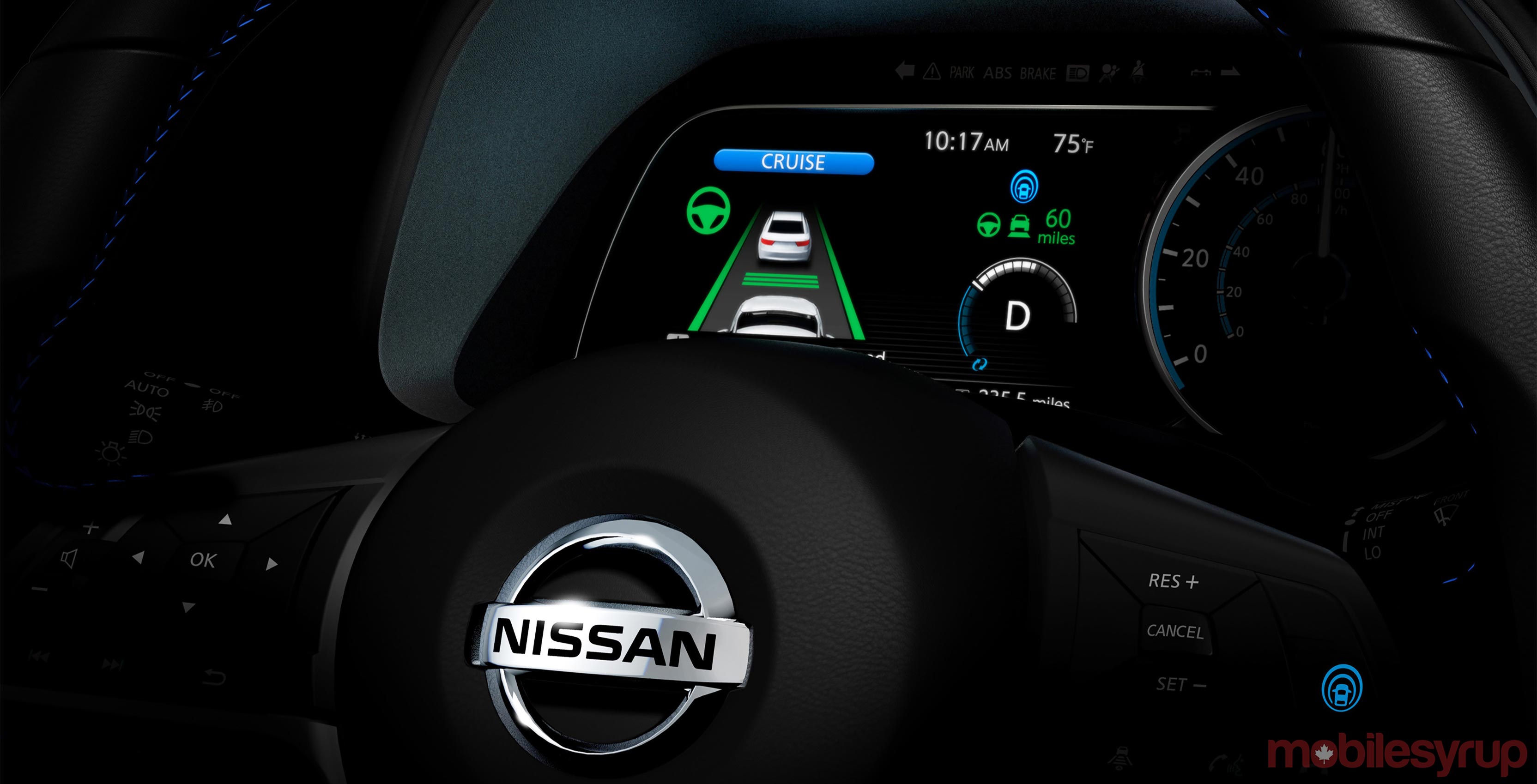 What do you call a self-driving feature that kind of functions autonomously, but not in the truest sense? You throw the word ‘assist’ in there, which is where Nissan’s ProPilot firmly sits.

The feature is coming to the second-gen Nissan Leaf EV — the all-electric vehicle the company will reveal on September 5th — in the aims of allowing the vehicle to drive smarter in highway situations. It’s a Level 2 automation system, meaning the car can accelerate, decelerate, brake and steer on its own within certain conditions.

I got to test drive this, albeit in a Nissan Rogue SUV, during a visit to the automaker’s research and development facility in Farmington Hills, Michigan. While mostly impressive, it’s a baby step toward the vision of true hands-free driving.

Staying in the lane 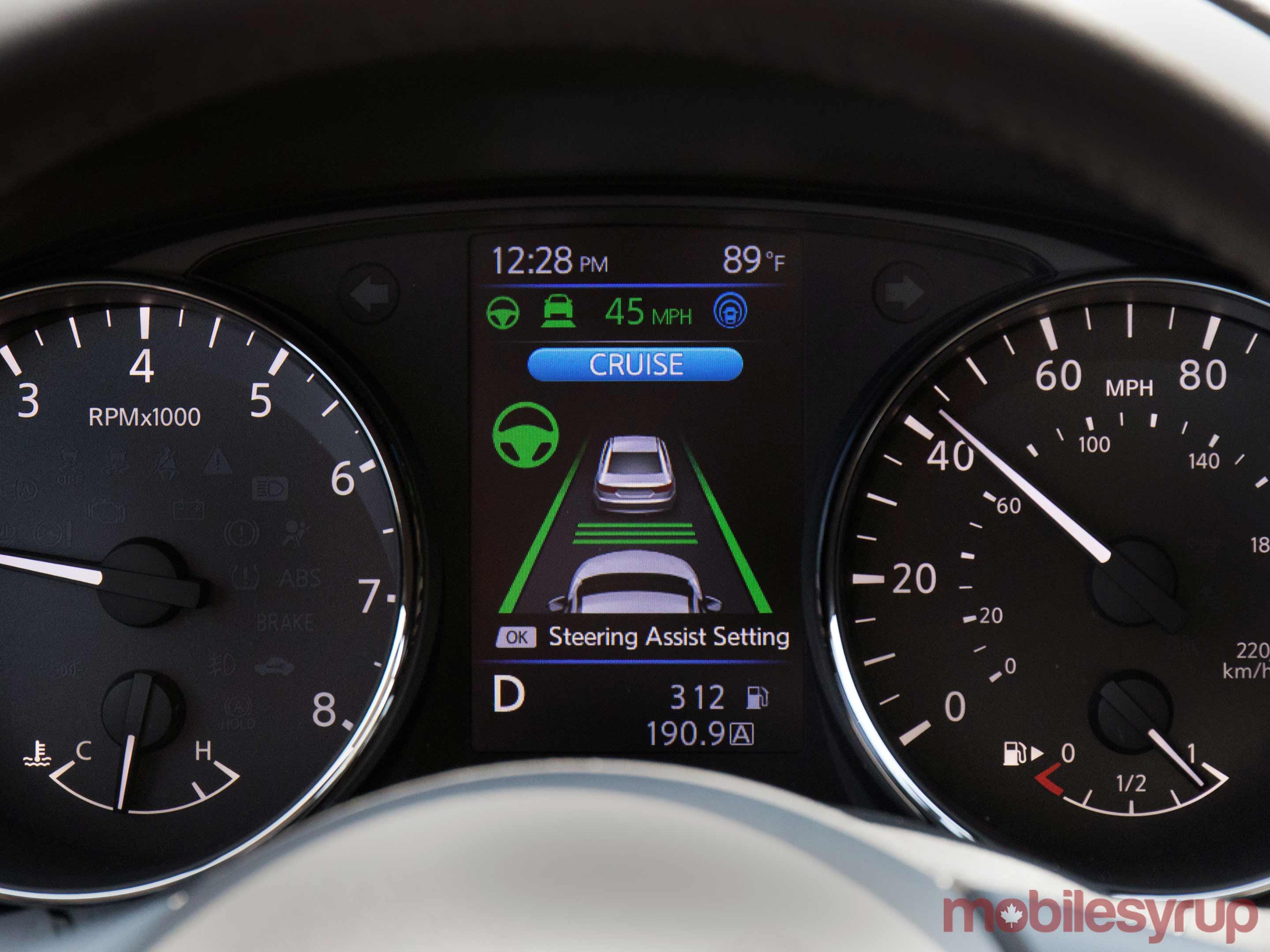 ProPilot Assist can best be described as an enhanced take on adaptive cruise control and lane guidance. It uses software to make more precise calculations, in addition to a forward-facing camera and radar that is always looking for lines to determine where lanes are on the road.

Once engaged by pressing a dedicated blue button on the steering wheel, the system keeps the vehicle within the lines, centering it if it veers too far either way. Unlike other self-driving features from other brands, this one does require at least one hand on the steering wheel, with a torque sensor inside ensuring that.

The car also sped up and slowed down based on the distance of the car in front, and setting a top speed allowed me stay with the flow of traffic.

The system can be overridden by simply turning it off or changing lanes as you normally would by using a turn signal. I had no problem doing either one while on the highway during the test drive, but I did test it by taking my hands off the wheel to see what would happen.

An audible beep, like you might hear when driving without a seatbelt, started to go off, while the cluster flashed a warning at the same time. I asked the Nissan rep in the car with me what would happen if I continued to go hands-off with the wheel after about 10 to 15 seconds.

More audible beeping would commence, then five seconds after that, it would hit the brakes a few times to get the driver’s attention. Failing that, it would then start slowing down the car and turn the hazard lights on once it fell below 60 km/h.

If even that’s not enough, or the driver is incapacitated, it will bring the car to a stop in the same lane because it can’t pull over on its own. 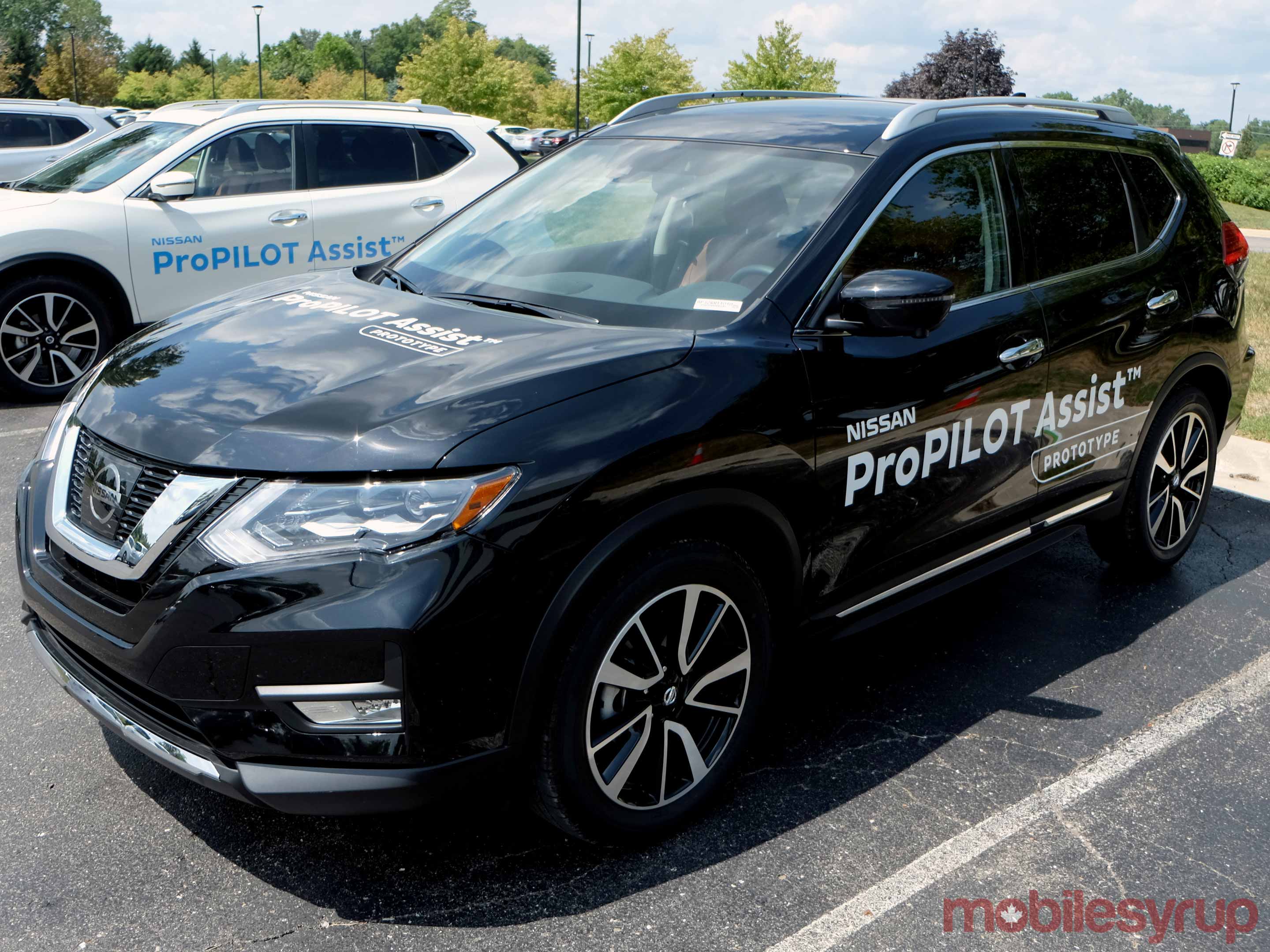 The digital cluster displayed both the top speed I set for the assist, and the distance setting for any vehicle in front of me. Three lines was the most conservative, with one line being the closest. It was necessary to adjust it on the fly during the drive, particularly in cases where traffic started to back up.

ProPilot Assist would still brake and even outright stop in these stop-and-go situations, which was relaxing to see. While I could take my foot away from the pedals, I never felt completely comfortable with both hands off the wheel.

The steering wheel did turn on its own in bends or curves in the lane, though it was clearly limited as to how sharply it would go. The tighter the bend — and the threshold isn’t very high — the more I had to help it by turning the wheel more myself.

The camera is supposed to see far enough down the lane to know when a bend is approaching, thereby applying brakes to angle the vehicle appropriately. I put one finger on the wheel for the sensor, and felt how the car navigated the curve. It was so close to being autonomous, I came away impressed, except I knew it would take time to trust it like that every time. It did need help in sharper turns, where I had to grip the wheel tighter to help guide it.

What about the city? 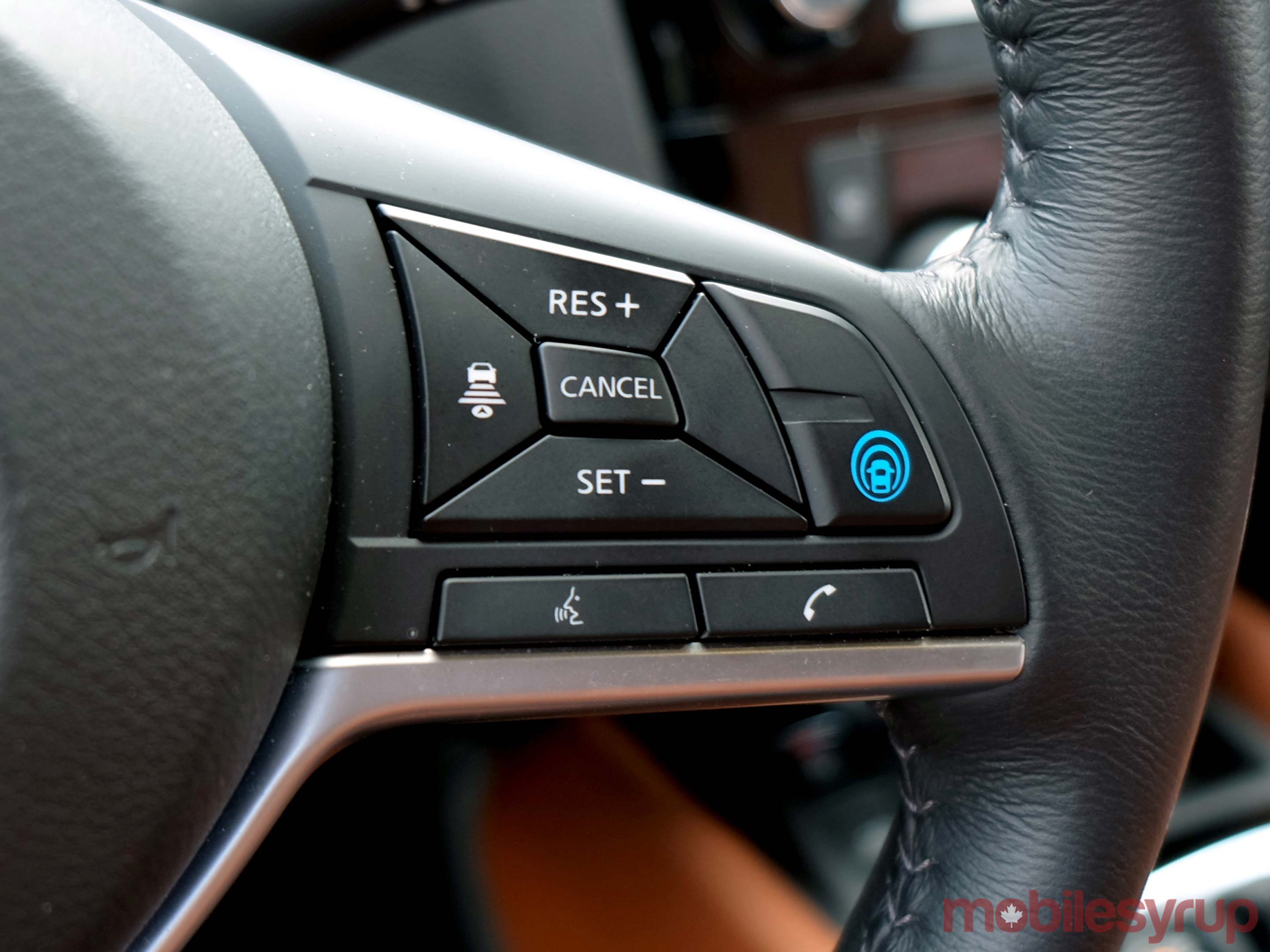 I test drove the car in Farmington Hills, and the biggest problem was two common road fixtures: intersections and curbs. Since ProPilot Assist needs to see two distinct lines in the road, one line and a curb doesn’t count as a lane. At that point, it can’t read anything and leaves the driver to take over.

Even on the highway, there are some caveats. Vehicles merging with traffic from an on-ramp can’t be seen by distance until they enter the lane in front of the driver, which means that ProPilot Assist won’t know to slow down the car until it’s possibly too late. Hence, the driver needs to engage and deal with it.

Since manually applying brakes overrides the system, I would have to press the blue button to re-engage often, making it virtually unusable under busier circumstances. Not only that, but it’s unclear how differing weather conditions might affect performance.

Snow-covered roads nullify the system because there would be no visible lines. Heavy rain at night might also affect visibility. Construction sites on a highway where lanes aren’t clearly defined could also confuse it. Driving in tunnels is fine if the lighting is bright enough, but going under bridges where lines are ‘cut off’ will require some manual control. 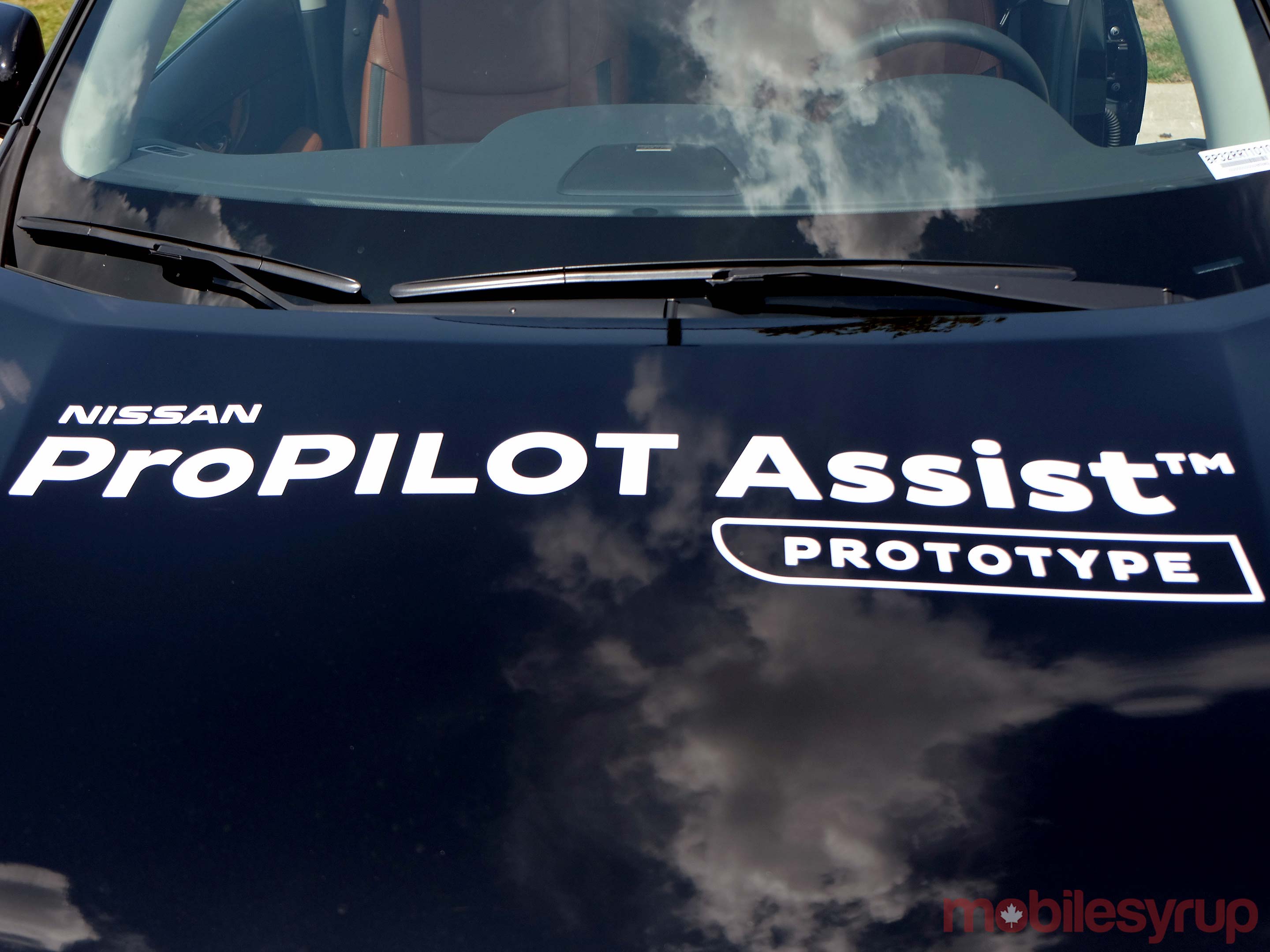 Being a driver assist feature, building trust in ProPilot Assist is what will likely take the longest to achieve. That can only happen once the limitations are fully understood.

That it can work up to 140 km/h makes it clear the system’s designed for road trip driving on highways, assuming you have identifiable lines on either side.

Either way, this feature is coming, starting with the upcoming Leaf EV, and likely filtering down to other Nissan models in the next year or two. Level 4 self-driving cars will be coming sooner than later, putting a lot more onus on the car to handle driving duties under the same circumstances.