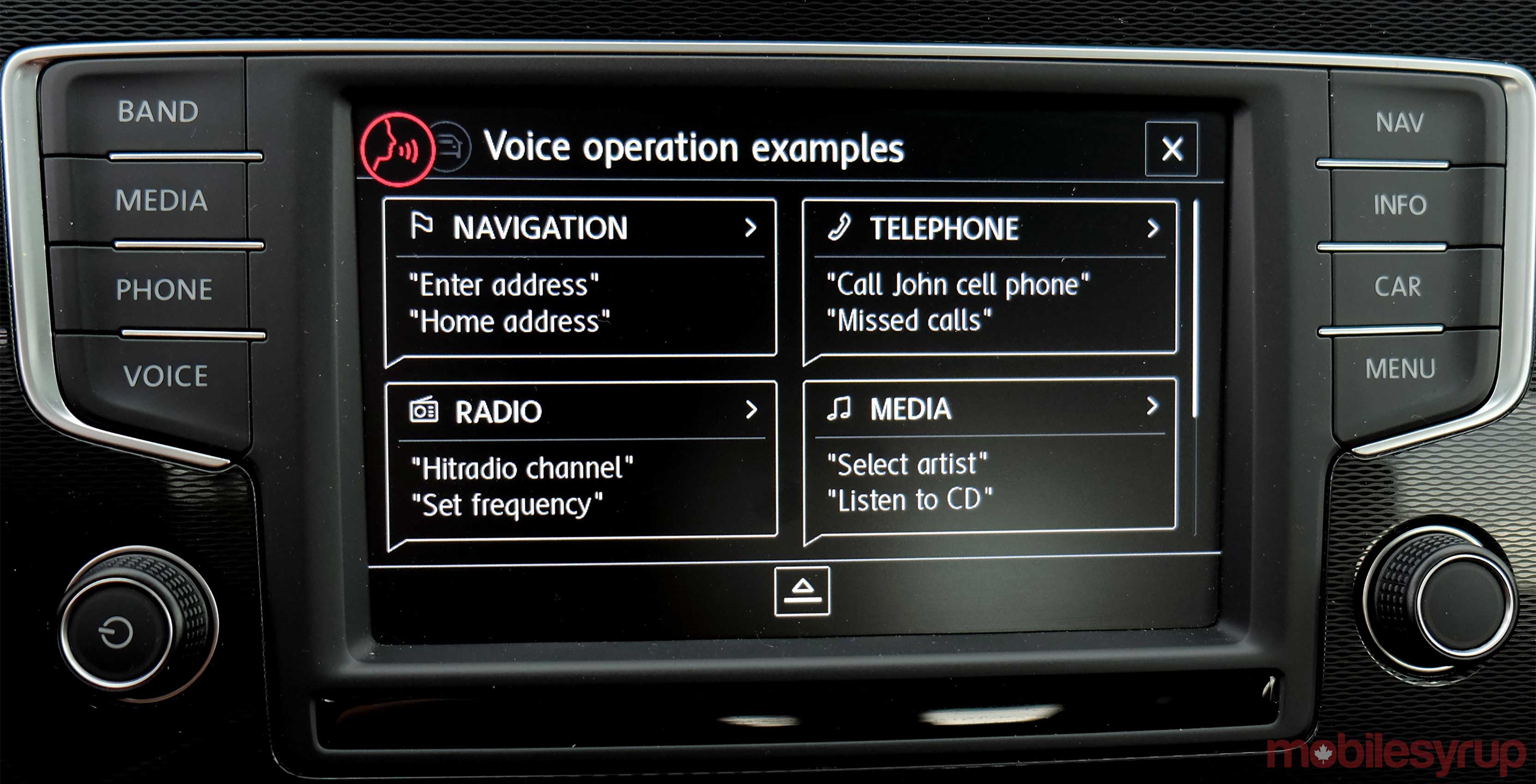 Volkswagen’s brand image may still be somewhat embattled from its recent scandalous past over emissions, but the infotainment side has been trucking along in the meantime.

VW’s Modular Infotainment Platform, or better known as MIB, has gone through some sweeping changes over the last few years, though this was my first time truly testing it out. Beyond moving to capacitive touchscreens and redeveloping the interface, it has tried to more than keep up with what competitors are offering.

In doing so, VW has ceded some control of its infotainment system to Apple and Google, by bringing in CarPlay and Android Auto, respectively. Along with MirrorLink, there are smartphone connectivity options out of the gate that help bridge the gap left over from the system’s other shortfalls.

The 2017 Golf GTI packs it all in, but how well does the full package play when put together? 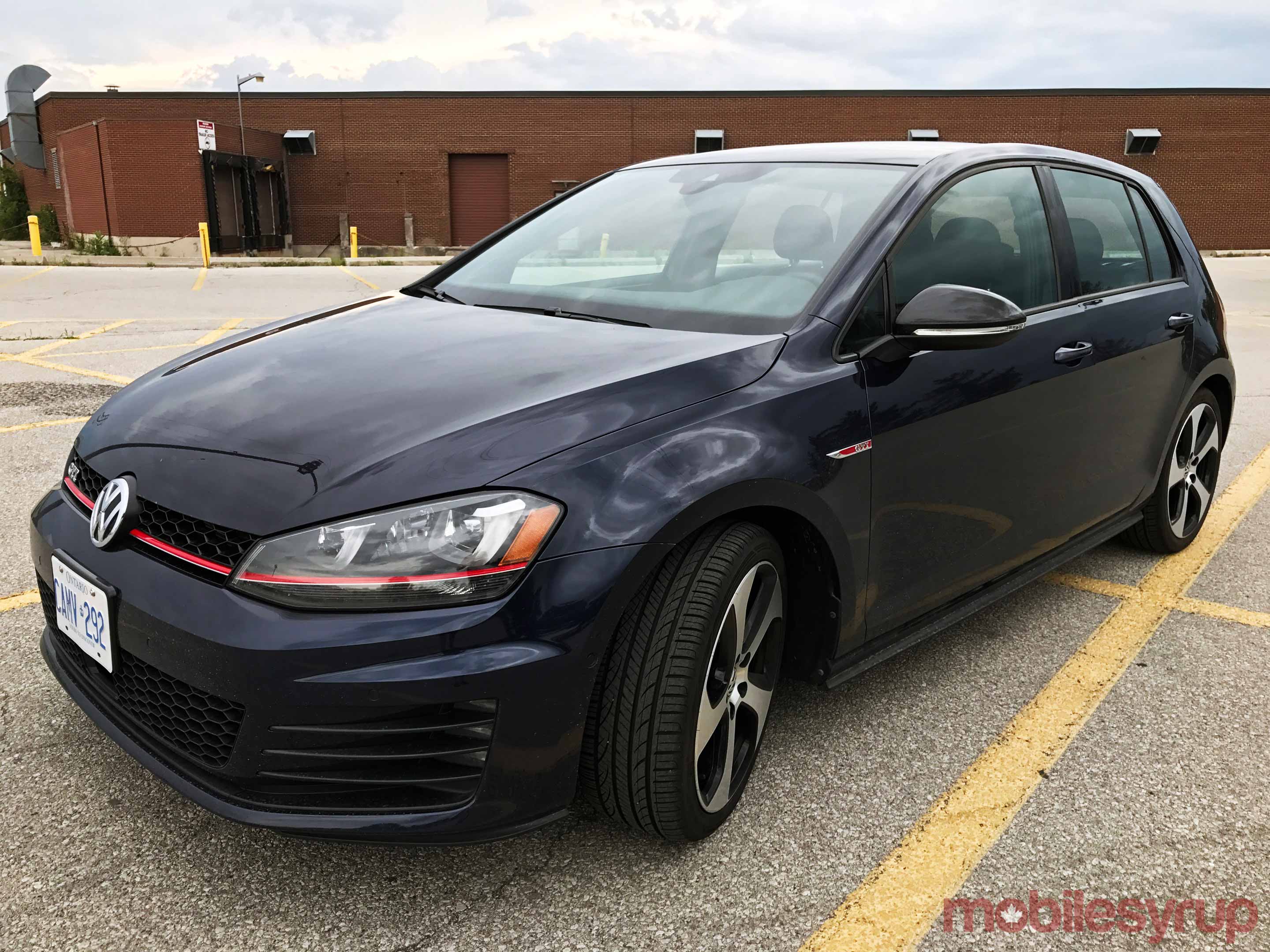 Among the German automakers, VW was one of the first to fully embrace the sea change that was taking place in infotainment. Clunky resistive (or non-touch) touchscreens have given way to easier swiping and tapping on capacitive ones. App integration is now, at least in part, being offloaded to other vendors to facilitate.

The word “modular” being included in the system’s name is a curious choice. Does it mean there are swappable components to keep the hardware current over time? No, but it is a veiled reference to the fact VW is designing its system at a faster pace to coincide with the devices it connects with.

That’s noble for an automaker because it’s an open acknowledgement that the industry-wide turtling pace of infotainment development simply can’t keep up with the consumer electronics world. The continuing development and evolution of autonomous and electric vehicles may cut the slack considerably, but for now, it’s always been a game of catch-up.

VW’s overhaul over the last few years has tried to simplify some of the complexities of the recent past. I never got to fully test MIB from the start, so don’t have a frame of reference within VW, but can attest to this renewed focus on blending simplicity with German-style efficiency. 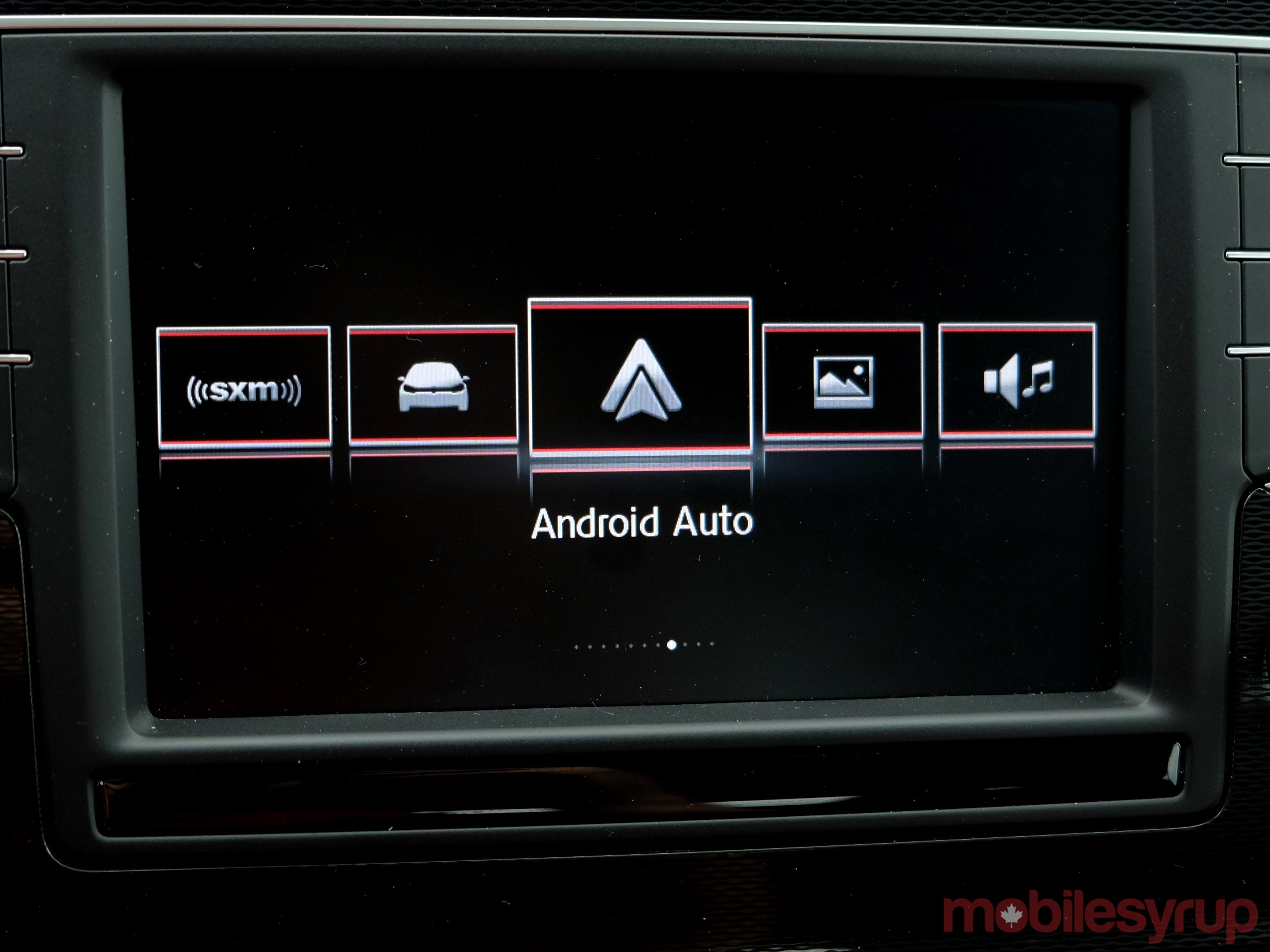 It helps when you make the layout as user-friendly as possible. The 6.5-inch display is flanked by shortcut buttons that get to their respective features faster. The dial to the left handles volume, while the one on the right helps navigate the interface, even though touch is always an option.

A lot of what you might expect from a modern vehicle is included. Bluetooth is a given, and the voice button on the steering wheel can also trigger Siri Eyes Free with a long press when an iPhone is connected wirelessly. One catch is that only one Bluetooth device seems to work at one time, meaning I couldn’t have a passenger stream music from his or her phone while I accepted phone calls on mine, for example.

No in-car Wi-Fi hotspot was available with this car. It is a feature made available in other countries, but apparently not yet in Canada, despite there being a SIM card inside.

There’s no wireless charging dock, either, though the USB port in front is the primary connection method because of the other platforms supported here. There is an Aux-In port, plus a 12-volt socket too.

VW has its own voice recognition platform with preloaded phrases, so that you can make calls or send texts without touching the phone, for instance. Built-in navigation is another one that responds to voice when asking for a destination address.

The menu layout is relatively straightforward, except it takes a little digging to find everything. This is probably one reason why VW separated things with the shortcut buttons. App-Connect is the conduit to which CarPlay, Android Auto and MirrorLink can initially be set up, but I didn’t find any particular app integration beyond those platforms. 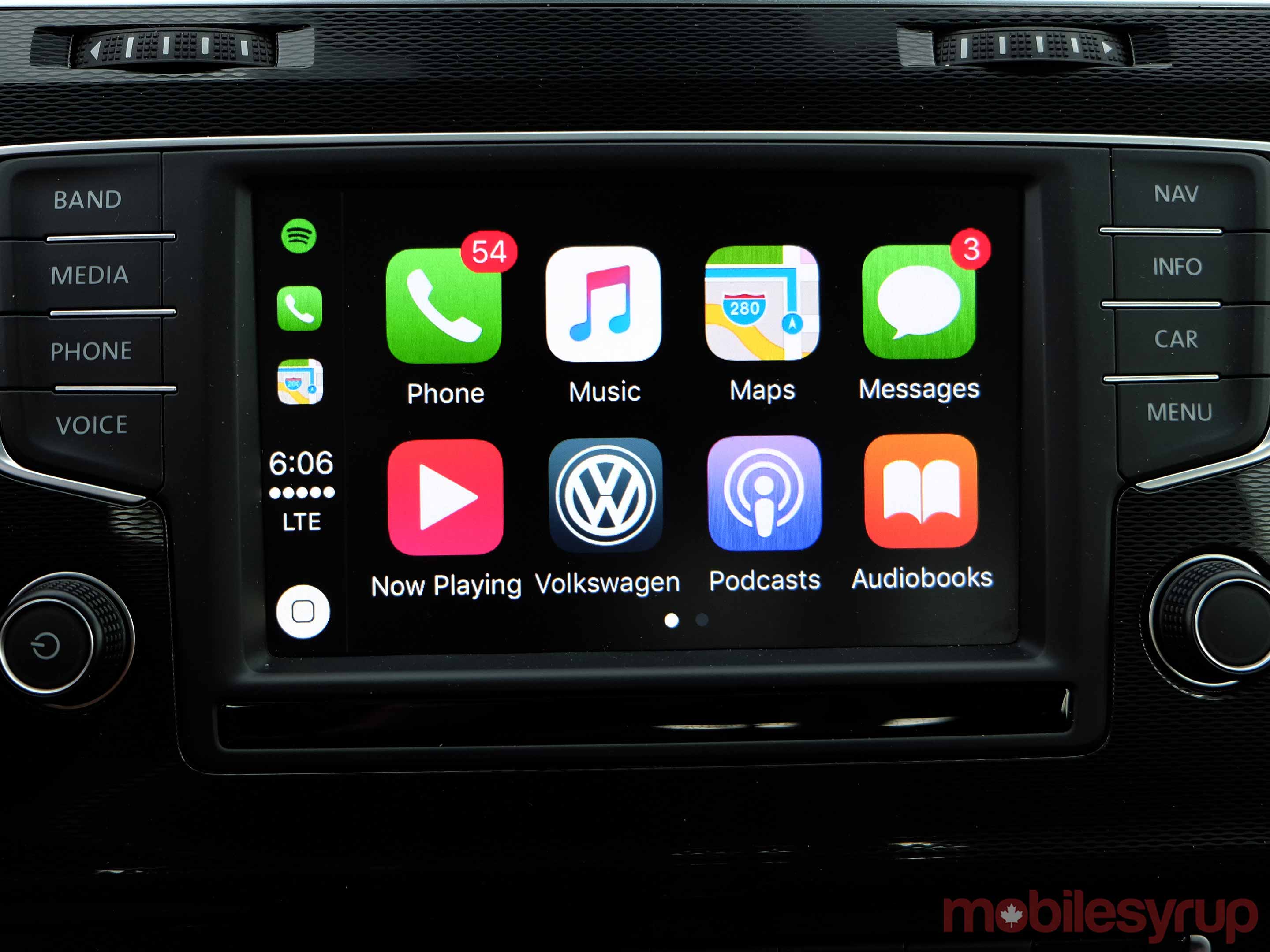 Bringing in CarPlay naturally changes a lot about how an iPhone interfaces with a VW vehicle, much like it does with other makes and models too. It only works with a wired connection via USB, and was an easy setup upon plugging in the phone the first time.

With CarPlay running, part of the MIB system adapts to work with the platform. Again, no surprises here. The voice button on the steering wheel defaults to Siri in this instance, thus silencing VW’s own. Pressing the navigation button switches over to VW’s map, which can stop audio playback.

MIB treats CarPlay a little like an app unto itself, which is why it can be overridden with the system’s other features. Pressing the navigation button moves to VW’s map, not Apple Maps. Pressing the voice button (next to the screen) will trigger VW’s own voice option. The voice button on the steering wheel is one exception where Siri is the default.

There were strange instances of interference that I couldn’t troubleshoot whenever I ran CarPlay. Getting a notification on my Fitbit cut off the audio. The track was still playing, but no sound was coming out of the speakers. This happened in other cases where I hit a small bump on the road. Restarting CarPlay usually solved this, but it was nonetheless a bizarre set of circumstances.

At first, I thought it might be specific to Spotify, which has been wonky on the platform in the past, but it happened to other apps as well, leading me to conclude CarPlay was the culprit. Listening to Beats 1 on Apple Music led to the same result. Arghami was very buggy, but it turns out that it can be with a home speaker over a Chromecast or AirPlay too.

I’m not sure if the iOS 11 update would fix this, or if it’s something VW would have to look at. It might even be specific to the vehicle I had. Either way, it happened too often not to notice. 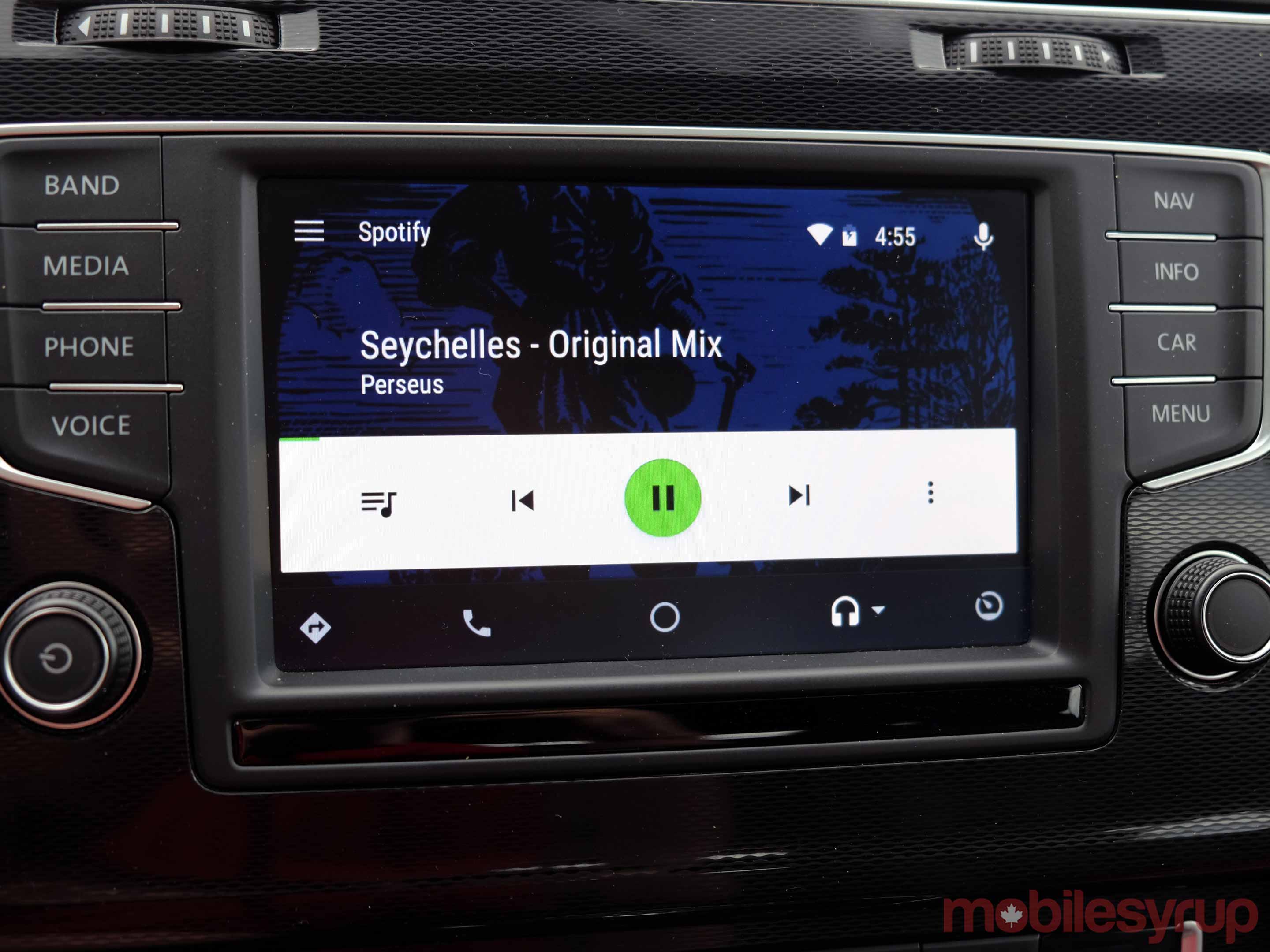 I found it interesting that the same issues that crept up with CarPlay didn’t affect Android Auto the same way. There was one instance where Spotify stopped playing, but it never happened again after that.

Here, too, Google Now would work through the voice button on the steering wheel, though I found it better to just tap the microphone icon on the screen to make sure. Until Google integrates Assistant into Android Auto, the lack of depth in Now’s voice platform will be noticeable.

Even so, the basics are still there. Making or taking calls, sending texts, launching apps, playing music and getting turn-by-turn directions via Google Maps are all standard. There were no real surprises in performance, other than that CarPlay seems to integrate a little better.

The Waze public beta for Android Auto is currently only compatible with head units that can run the platform, not on a phone by itself. That would make the MIB system eligible, but I couldn’t test it because it wasn’t made available to me in time.

MirrorLink is built-in here, which is nice to have. There is some fragmentation in how it works because not all Android devices are compatible. It’s also more app-focused. Plugging in a MirrorLink-compatible phone isn’t enough on its own — apps that work with it are required to use the platform.

That list isn’t necessarily a who’s-who of popular apps, and some of them are only useful to people in other countries. RockScout stands out as a conduit for popular audio apps, like Spotify, Stitcher and iHeartRadio. Most others, however, don’t stand out.

MirrorLink isn’t quite what it once was, where users could mirror a wide range of apps over to a compatible head unit. It was essentially screen mirroring more than anything else, but in the days of resistive touchscreens, navigating on the phone itself was the only way to make it work.

Now, controls are pushed to the dash or steering wheel, which explains why compatibility and functionality may feel a little more restrictive.

Bringing in CarPlay, Android Auto and MirrorLink gives VW drivers (in cars that have them) the chance to benefit from the main three smartphone integration platforms available. Not every automaker pays attention to MirrorLink, so the fact it’s included is a nod to those who rely on it on the road.

CarPlay’s shakiness was hard to discern. I’ve encountered app issues with the platform in the past, but even in a recent review of another vehicle, I didn’t have the same experience. Whether VW has to roll out a software update to stabilize it, or iOS 11 will do that on its own, only time will tell.

"Not every automaker pays attention to MirrorLink, so the fact it’s included is a nod to those who rely on it on the road."