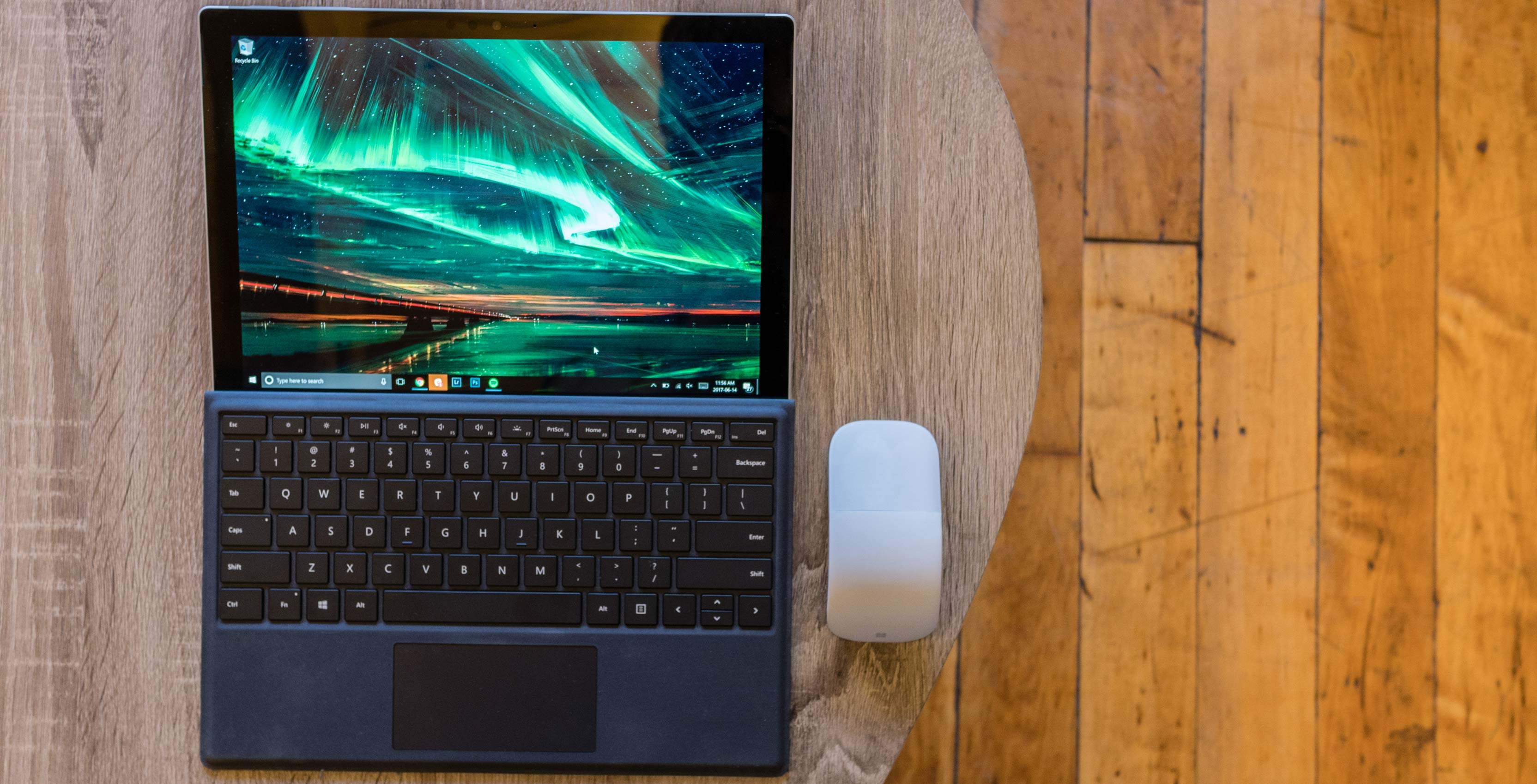 Not only does it not no longer feature a number in its naming scheme, it looks exactly like its predecessor, leading to the question: is the Surface Pro a substantial upgrade over the Surface Pro 4?

For its part, Microsoft says the inside of the Surface Pro has been completely redesigned and features more than 800 new custom parts. On the face of it, 800 is a number that sounds impressive, but make no mistake, this is an iterative update. However, it’s one that builds upon past Surface Pro iterations with smart new features. For the most part, anyway.

Full disclosure: this review was conducted using a Surface Pro model with a Core i7 processor, 16GB of RAM and 512GB of internal storage. Unfortunately, the first Surface Pro unit provided to MobileSyrup had a defective CPU. Microsoft quickly provided MobileSyrup with an additional review unit.

Unfortunately, by the time I diagnosed the problem, I only had one day with a fully working unit, so I was not able to sufficiently test certain aspects of the device like battery life and performance. I’ll update this review in a week’s time to offer more detailed impressions on those aspects of Microsoft’s latest 2-in-1. 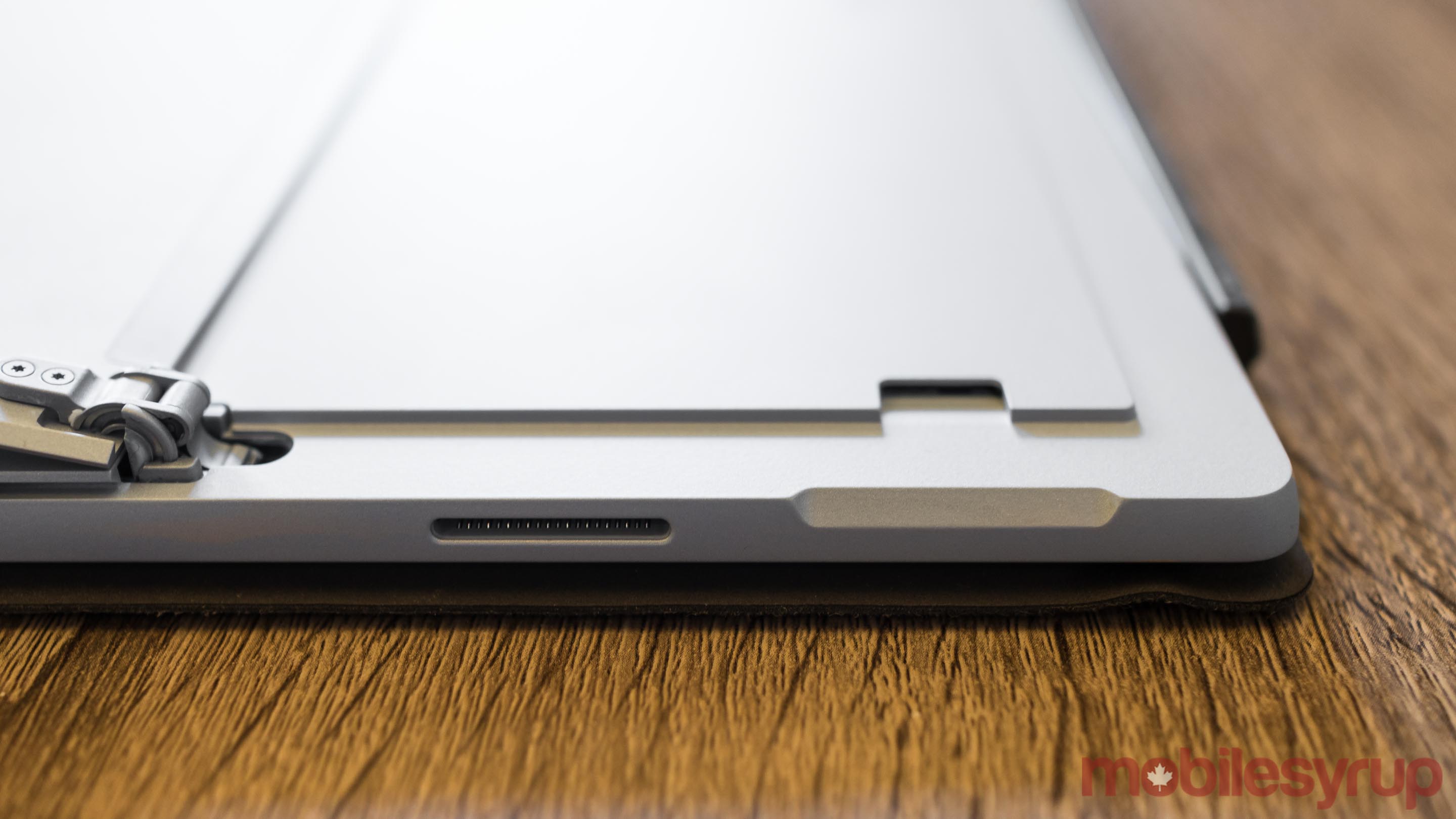 Leading the Surface Pro’s list of new features is one of Intel’s three new seventh generation ‘Kaby Lake’ processors. While not a significant improvement over the company’s sixth generation ‘Skylake’ CPUs (themselves not a major improvement over Intel’s previous Broadwell architecture), the new processors do offer several advantages over their most recent predecessors.

From the point of the average consumer, the most significant of these improvements is better 4K video playback. Each Kaby Lake processor ships with native HEVC and VP9 codec support. Both codecs were designed with 4K playback in mind. According to Intel, battery life when watching UHD content on one of its new chips is 260 percent better than when compared to on a Skylake CPU.

In short, with the Surface Pro you can watch 4K content on websites like YouTube and Netflix to your heart’s content, the 2-in-1’s CPU will make short work of any UHD content, and it will do so while draining relatively little battery power.

Intel’s new CPUs also offer native support for both USB-C and Thunderbolt 3 ports, which is something of a moot point as the Surface Pro adopts neither next generation connectivity standard. That is, users are left with the same set of ports that came with the Surface Pro 4: there’s one USB-A 3.0 port, one mini DisplayPort, a 3.5mm headphone jack and Microsoft’s Surface Connect for charging.

How you feel about the Surface Pro’s port situation will depend on whether you’ve become invested in USB-C. For the vast majority of consumers who buy this device, they’ll be happy to find their new computer works just fine with all their existing peripherals. For the much smaller group that has moved to USB-C, Microsoft plans, in something of a cheeky move, to release a dongle to meet their needs.

Once I had a model that worked properly, performance was excellent overall. My unit’s Core i7 made using programs like Adobe Lightroom and Photoshop a pleasure. I will note that Windows 10 is very aggressive when it comes to throttling the processor to eke out additional battery life. If you want the smoothest possible experience, you’ll need to take a more active role in telling Windows how much performance you want out of the processor by tapping on the battery indicator and selecting a desired level of performance.

All of that said, if you own a Surface Pro 4 or Surface Pro 3, then Surface Pro’s new CPUs on their own offer little reason to upgrade, as performance is not substantially improved upon what was available with those two devices. 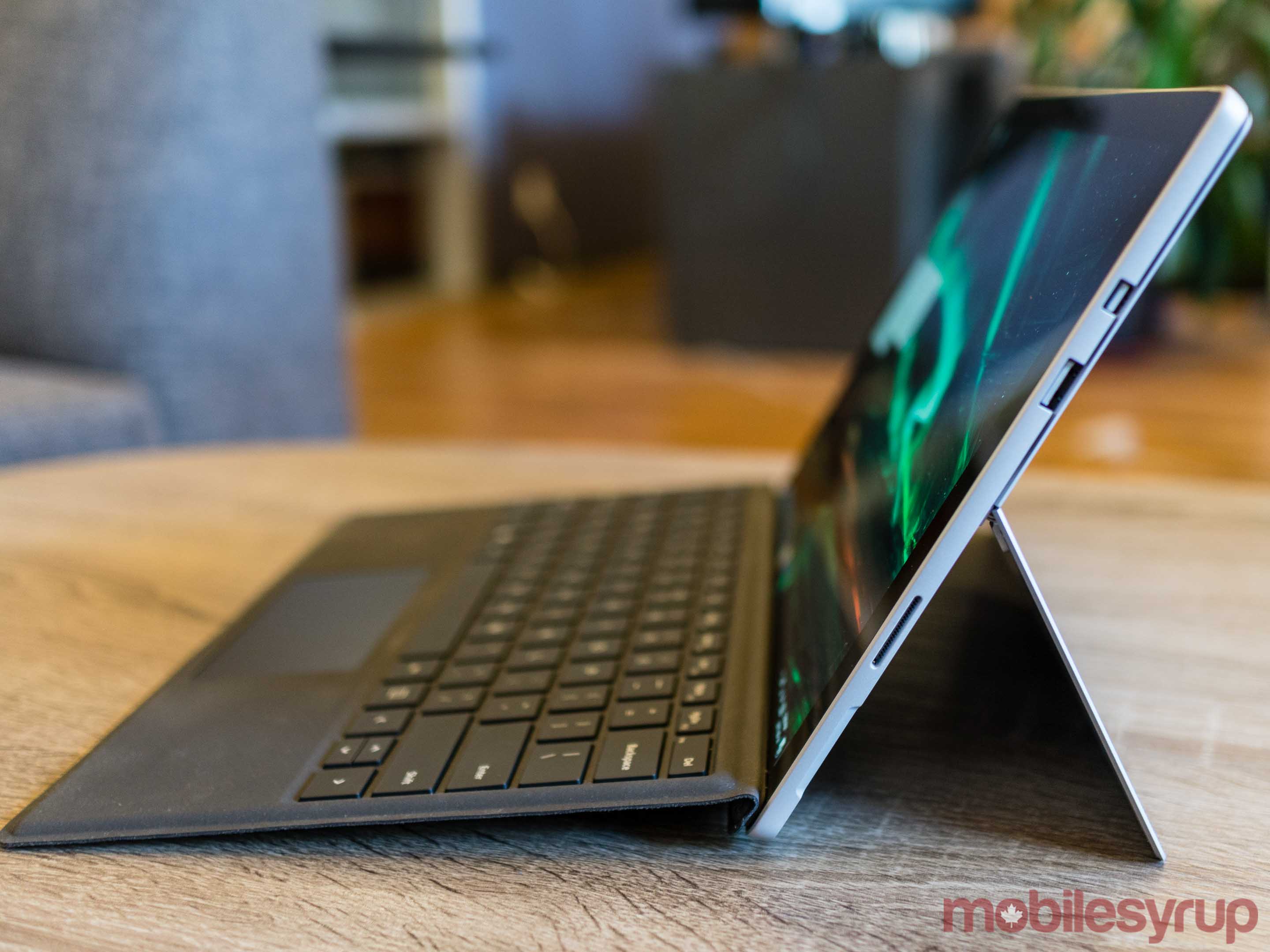 The more significant reason to buy one of these new machines is their new cooling architecture. Both the Core m3 and Core i5 Surface Pros feature a fanless design. The latter is a significant feat; the Surface Pro is one of the first Core i5 laptops to get away with eschewing a fan.

A passive cooling design presents two main advantages. The more obvious of the two is that the computer is quieter during operation. The second and more meaningful advantage is that the 2-in-1’s battery no longer needs to power a moving component, leading to improved battery life.

As I mentioned at the start of this review, I tested the Core i7 Surface Pro. It’s the one model that does not feature a fanless design — though Microsoft says the Core i7 model’s thermal design is “quieter than ever.”

On that point, the Core i7 Surface Pro lives up to Microsoft’s claims. While performing basic computing tasks like writing this review, my Surface Pro’s fan was inaudible. During more intensive tasks such as editing 24-megapixel RAW photos in Adobe Lightroom, I then started to hear the computer’s fan. However, even in situations like that, the fan was barely audible and Surface Pro’s stereo speakers, weak as they are, were easily able to hide any fan noise.

When it comes to battery life, Microsoft says the power cell on the Surface Pro should provide up to 13.5 hours of uptime, a 50 percent improvement over the Surface Pro 4. If you read the fine print, the company notes it came to this estimate with a Core i5 model with 8GB of RAM and a 256GB SSD. Moreover, like with most battery life tests of this type, the company says it ran a looping video until the device powered down.

Between the fact that Intel’s new Kaby Lake processors excel at video playback and the fact that Microsoft used one of the two fanless models to arrive at its estimate, 13.5 hours is a best-case scenario. That said, in the short time I’ve had a properly working device, battery life has been impressive. In his blog post introducing Surface Pro, Microsoft’s Panos Panay says “You can leave your charger at home” when using the 2-in-1. I’m not yet sure if battery life is that good, but it appears my review unit could certainly get me through something like a multi-hour press conference without issue. I’ll have more to say on this subject once I’ve spent more time with the device.

A beautiful display of your affection 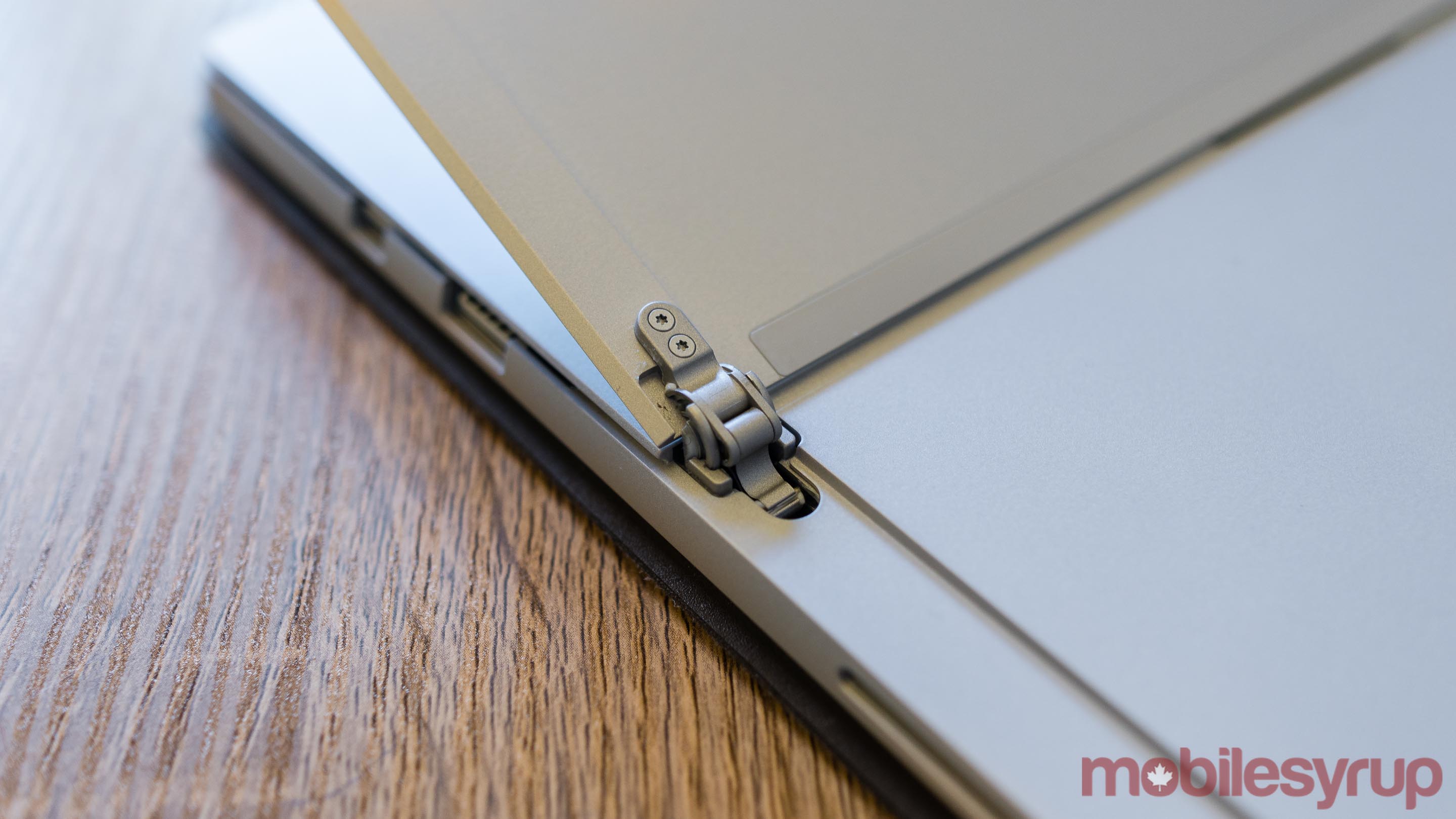 For better or worse, Surface Pro looks very much like its predecessor, with few standout new features to be found on the outside of the device.

The one major addition is a new kickstand mechanism that supports a much greater 165 degrees of motion. This allows users to put the Surface Pro in what Microsoft calls “Studio Mode,” essentially allowing them to use the device like a mini Surface Studio.

This mode is great for inking, but you don’t need a Surface Dial or even a Surface Pen to appreciate the new hinge mechanism, as it makes adjusting how the 2-in-1 sits on your lap a lot easier. 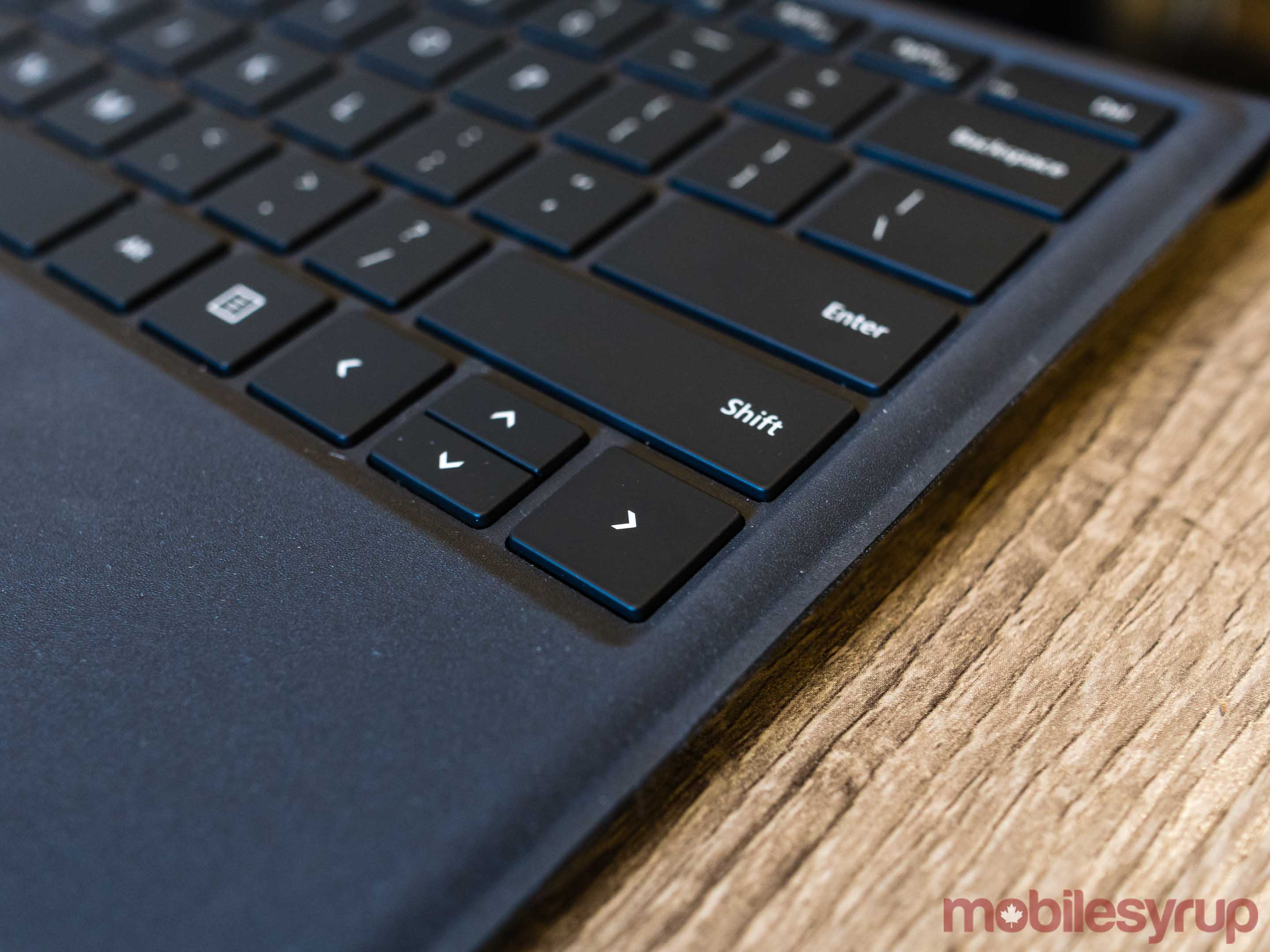 Like its predecessor, the Surface Pro’s 2736 x 1824 pixel, 3:2 aspect ratio display is gorgeous. Text, icons and lines are crisp. Moreover, out of the box and without any calibration, Surface Pro’s display is one of the most colour-accurate screens I’ve seen on a laptop.

However, I’m torn by the one new feature the Surface Pro’s display has over previous Surface models. Microsoft says the display supports an “enhanced” colour gamut. According to a company spokesperson I spoke with, “enhanced” in this case means a display that gets close but doesn’t quite cover the full DCI-P3 colour gamut.

Like Apple, it seems Microsoft is now intent on pushing DCI-P3 as the next colour gamut. I’ll admit I’m by no means an expert on colour gamuts, but it’s a move that makes little sense to me. Most often, when someone is colour grading in DCI-P3, they’re targeting high-end digital movie projectors, not other computer screens — not to mention the fact that actual professionals who need to work in DCI-P3 are buying monitors with built-in calibration tools that cost several times more than the Surface Pro. 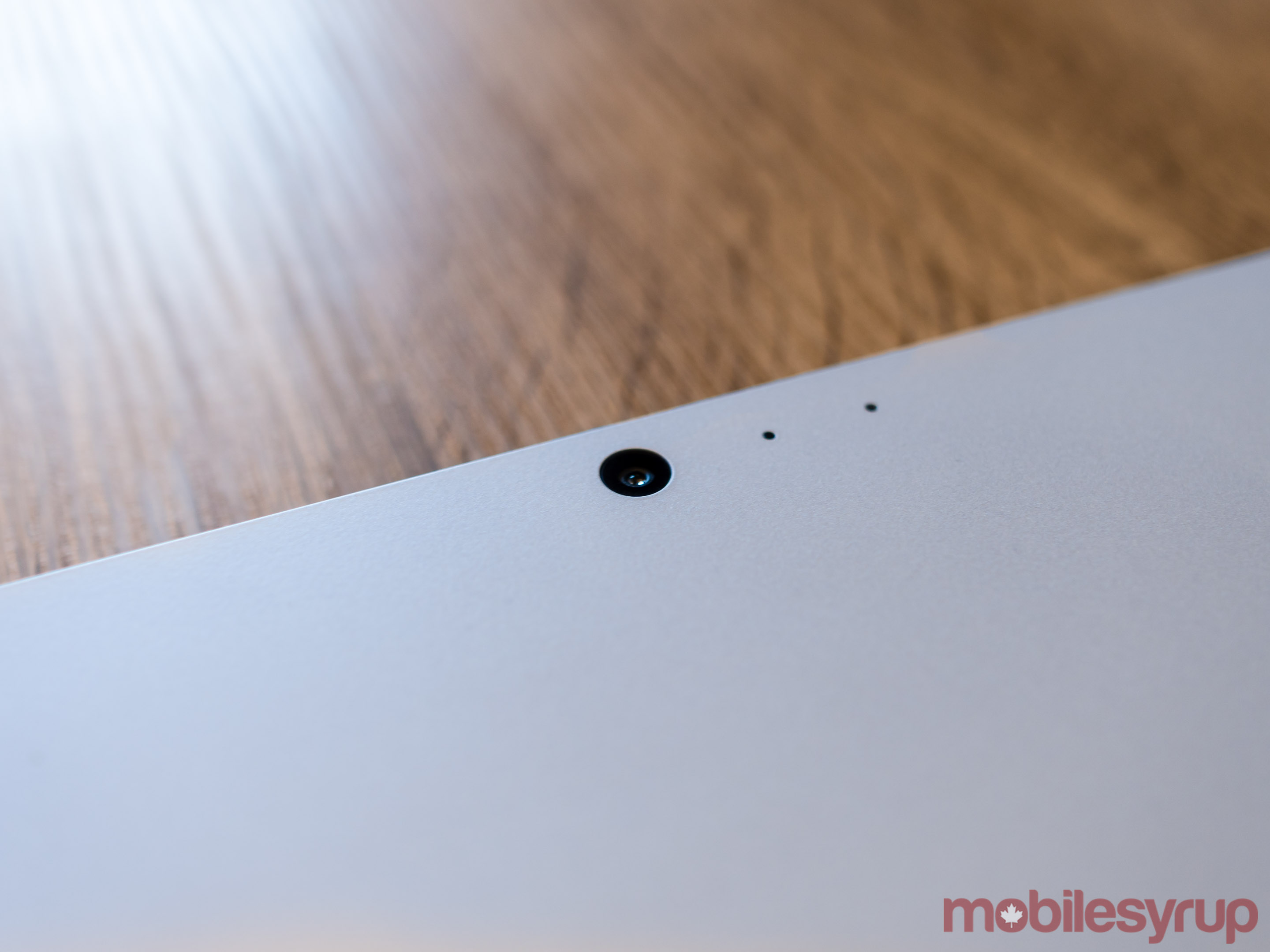 Then there’s the fact that, while we’ve seen computer, monitor and smartphones OEMs start to put out a greater number of devices with wide colour gamut displays, the vast majority of images and videos out on the internet are still colour-graded to adhere to the sRGB colour gamut. Unless an app supports colour management or an image or video is colour-graded to take advantage of the Surface Pro’s expanded colour gamut, the images you see while in this mode will look over-saturated to the point of appearing unnatural.

In most cases, this is what I saw when I used the enhanced colour gamut option on Surface Pro. Windows itself looked fine, but, at least to my eye, videos on YouTube and images on Instagram and 500px didn’t look right. Some will likely love the enhanced colour gamut option, but to those with a discerning eye or anyone that needs or wants to share their photography, videos and images online, they’ll look for a way to turn off this feature.

Thankfully, Microsoft makes it easy to do so. By pulling up Windows 10’s action center, Surface Pro users can quickly and easily switch between colour profiles. 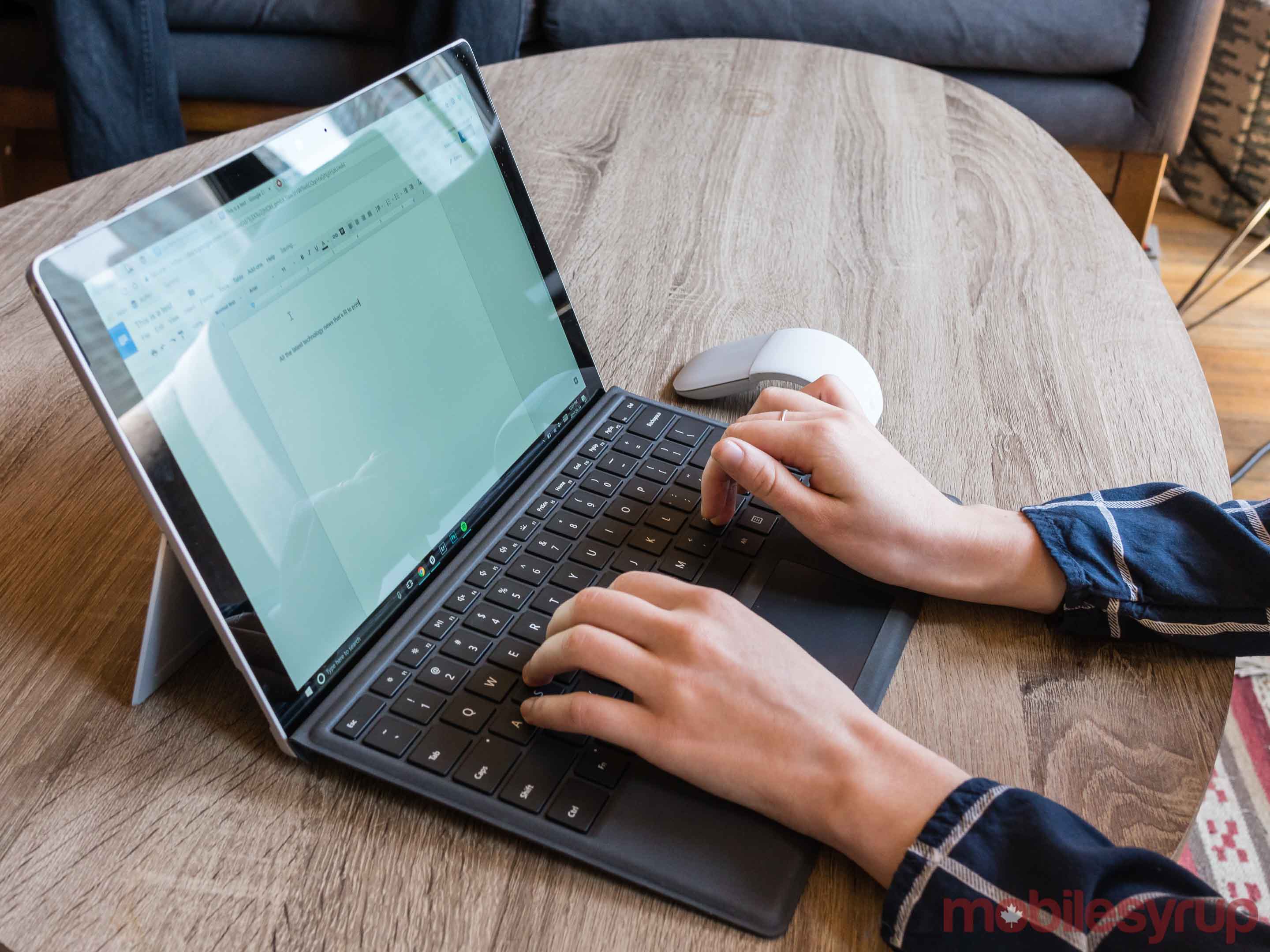 Like past Surface Pro updates, the new Surface Pro arrives alongside a refreshed Surface Pen and Type Cover.

The more substantial update comes in the form of the Surface Pen. From a performance standpoint, Microsoft says the new stylus, with 4096 points of sensitivity, is four times more sensitive than its predecessor. It’s now also twice as accurate and adds tilt functionality, allowing artists to use it for shading. Physically, it ditches the clip of past iterations. Replacing its battery is also easier thanks to the new design.

However, it does not come with Surface Pro. Microsoft’s reasoning for this move is that the Surface Pen now comes in four different colours — platinum, black, burgundy and cobalt blue. While this allows consumers to personalize their device to a greater degree, the unfortunate side effect is that first time Surface buyers will need to pay more to get the complete package, making the Surface Pro, which starts $1,049 in Canada, more expensive than its initial price would suggest. 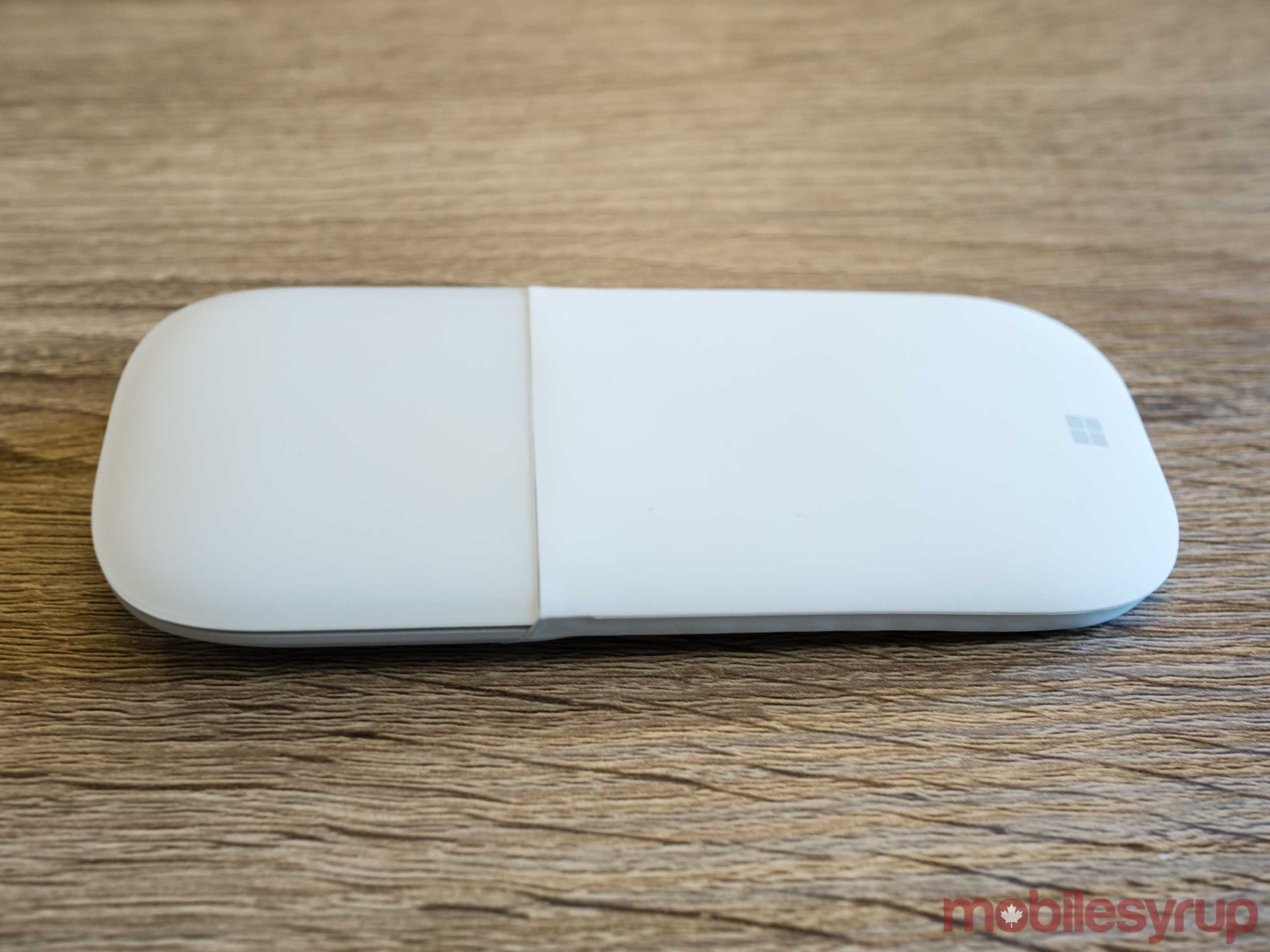 The new Type Cover is less exciting. It features a slightly reworked Microsoft key layout that moves the Insert key to make room for two dedicated display brightness function keys. If you must sabotage yourself with the Insert key, it’s still possible to do so — you just first need to tap the Function key and then press the Delete key.

Microsoft also recently updated Windows 10 to add support for a number of three-finger and four-finger gestures. These provide users another way to quickly switch between apps and virtual desktops. Overall, the new Type Cover is a joy to type on, but its track pad still leaves much to be desired. In Canada, the standard Type Cover in black costs $179.99. The Signature Type Covers, which feature Alcantara fabric, cost $199.99 and are available in platinum, cobalt blue and burgundy.

As it stands, Surface Pro is Microsoft's best take on the 2-in-1 form factor it invented almost half a decade ago.

That said, the irony of the Surface Pro lineup is that each iteration has served better as a laptop than as a tablet. The new Surface Pro does little to change that. Of course, that has almost nothing to do with its hardware and everything to do with poor developer adoption of the Windows Store.

Even in 2017, there are just far too few compelling apps that take advantage of the Surface Pro's versatility. It used to be that you couldn't do much about that if you wanted a Surface device. However, in the past two years, the Surface family has greatly expanded. Unless you really need and want that tablet functionality, I think the Surface Laptop is a much better fit for most people.