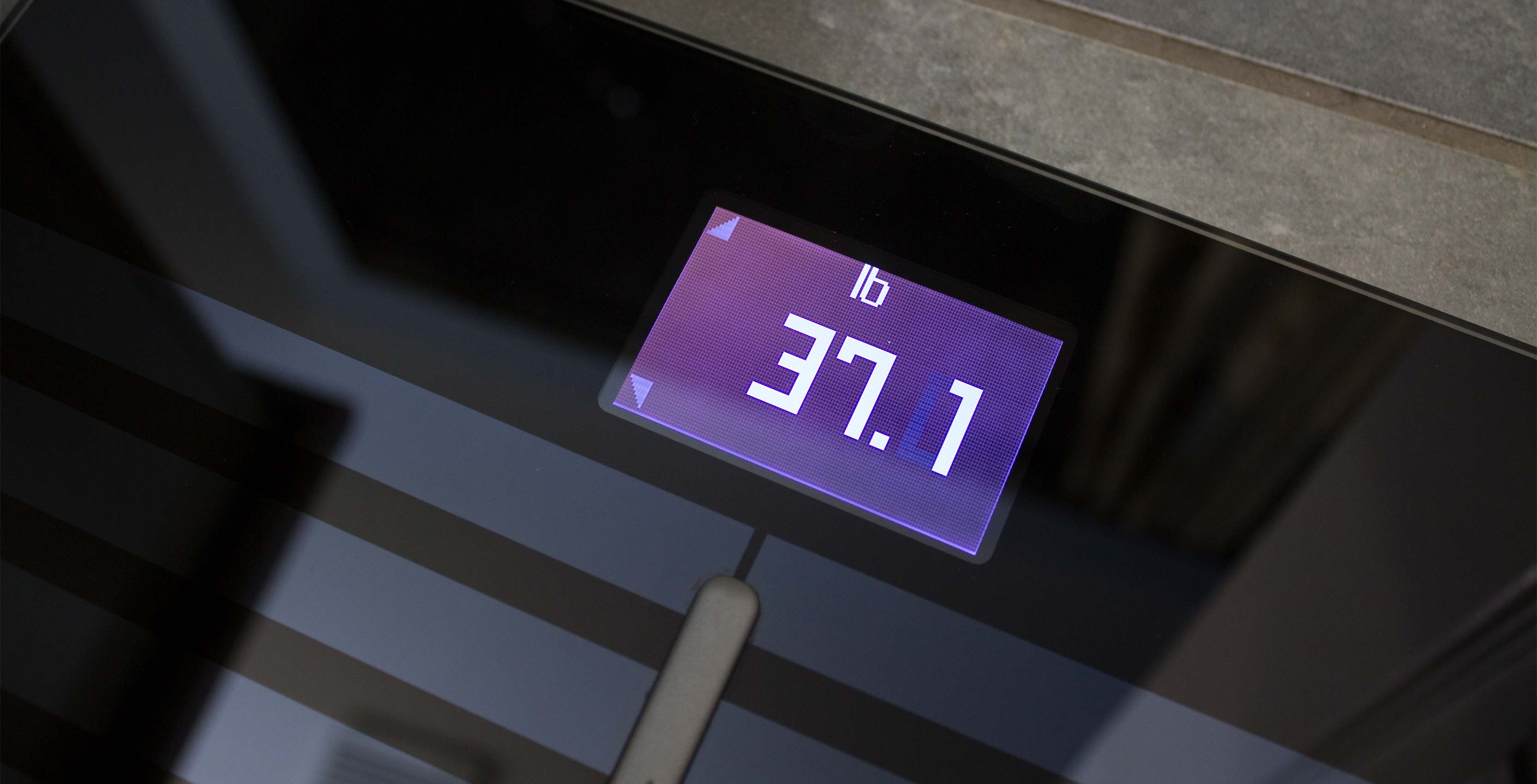 As the tech needed to connect products to the internet becomes more inexpensive, we are seeing more devices integrate connected functionality into their products.

Seven years ago you’d be hard pressed to find a Wi-Fi connected lightbulb or a thermostat that is able to analyze local weather forecasts to efficiently heat or cool your home. But fast forward to today, and all these connections are quite common.

Withings has been making connected devices for a number of years, with the company’s first device being the Withings Wi-Fi Body Scale. The product was a traditional scale, but also added features like a heart rate sensor and Wi-Fi connectivity. Once the user stepped on the scale the data was sent to the Withings app on their Android or iOS smartphone, allowing the user to analyze their overall body health. 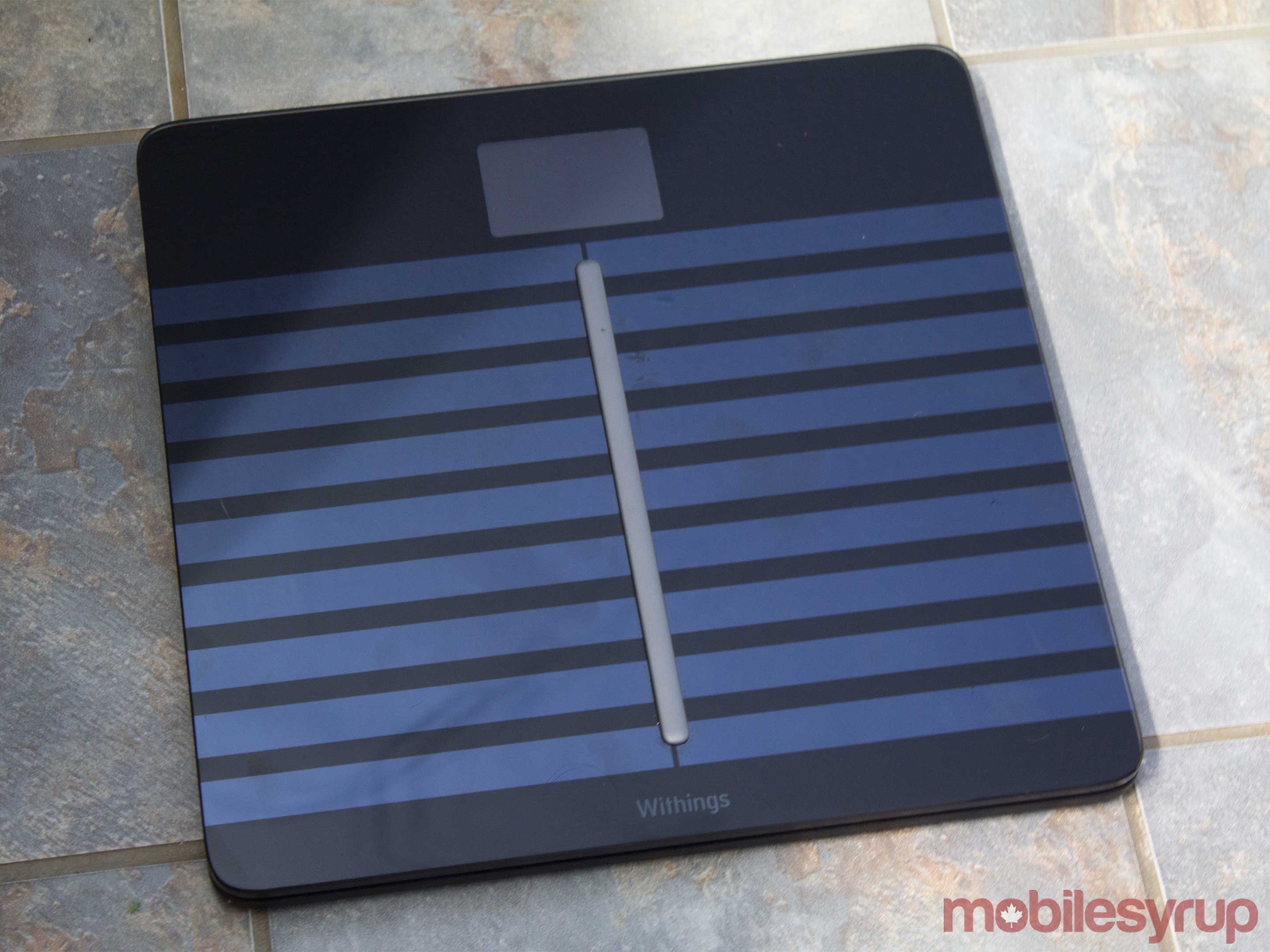 Between the introduction of the Wi-Fi Body scale and the company’s most recent Activité watch the Steel HR, Withings launched the successor to the company’s first scale.

The Withings Body Cardio Wi-Fi scale is the successor to the company’s first connected scale in many ways. But at the same time, it’s a new direction for the company’s connected products.

The new Body Cardio Wi-Fi scale takes many of the features of the first connected scale, like heart rate sensing, Wi-Fi connectivity and fat mass detection and cranks it up. The new scale includes all the same features but adds body water percentage, integrated rechargeable batteries, and pulse wave velocity (more on the last one later on in the review).

Most importantly, the new features could be the difference between being able to obtain a whole body health goal or not. 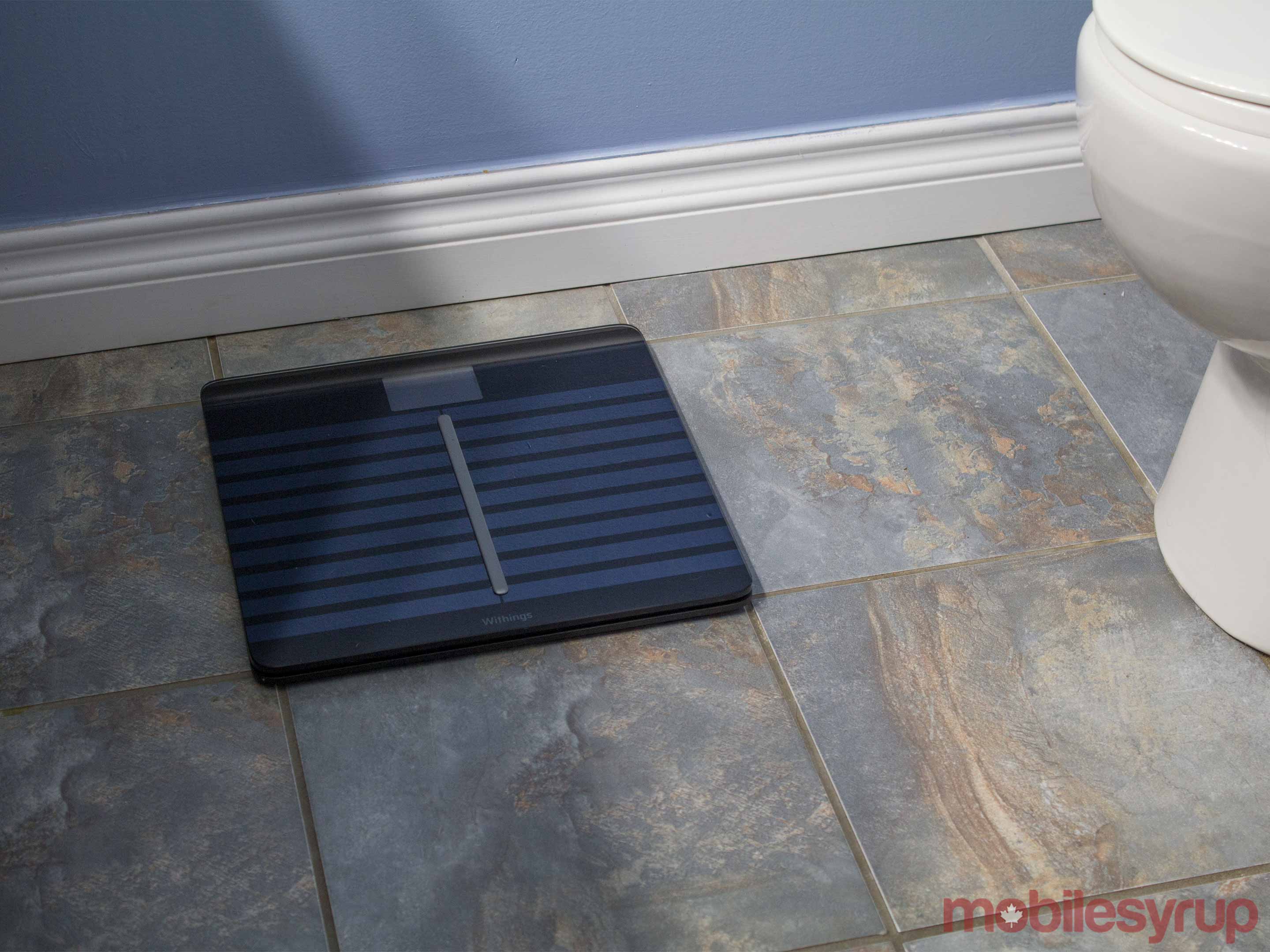 Since the new Body Card Wi-Fi scale is the first Withings scale to feature a rechargeable battery, I thought it was something worth pointing out in this review.

When I initially powered on the scale I ensured the device was charged to 100 percent. The scale was first charged on March 31st, and as of April 26th, the scale is at 87 percent. By calculating a daily discharge rate of 0.482 percent, I’m able to estimate that the scale should reach zero percent as of October 25, 2017, or about 208 days after the initial charge.

The discharge rate I calculated is based on daily weigh-in, as well as using all included features of the Body Cardio scale.

208 days falls a little short of Withings’ calculated 365 days of usage. It is worth noting that Withings has stated this is “up to” and not a guaranteed battery rating. Many things like number of weigh-ins, Wi-Fi signal strength and features used, can impact battery life. But considering the first Withings scale required standard AAA batteries, this is a huge improvement and a welcomed addition to the scale.

The Body Cardio is hands down a solid device. The scale is made up of an aluminium base and the top of the scale is made out of glass. Overall a well built and sturdy scale that makes weigh-in a breeze.

The previous Body scale was made of a plastic base which caused the device to feel a little cheap. I also found that the previous device didn’t calculate your weight as accurately when used on thick carpet due to the adjustable feet.

The glass top is just as one would expect, glass, but I did find that it easily collected any dust that was floating around. Cleaning the scale is a must to maintain its sleek looks. 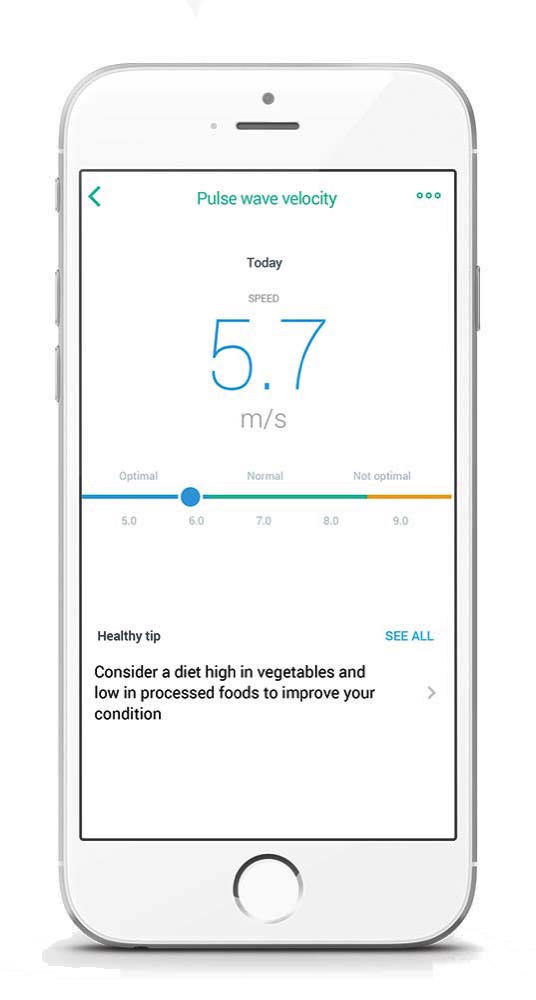 At the core of the Body Cardio Wi-Fi scale is just that, a scale, but the features of the scale are what make this device worth the purchase.

A top of the scale sits a monochrome display. With every weigh-in, the display lights up to show you your weight, fat mass, muscle mass, fat percentage, bone mass and most importantly, or at least the most notable feature for Withings’ new scale, a metric called Pulse Wave Velocity.

The Pulse Wave Velocity feature is what sets the Withings Body Cardio scale apart from other Wi-Fi connected scales like the Fitbit Aria.

For those who aren’t aware of what pulse wave velocity is, which is probably most — neither was I when I first picked up the Withings Scale — Pulse Wave Velocity, or PWV for short, is the measurement of the flow of blood through the arterial tree. 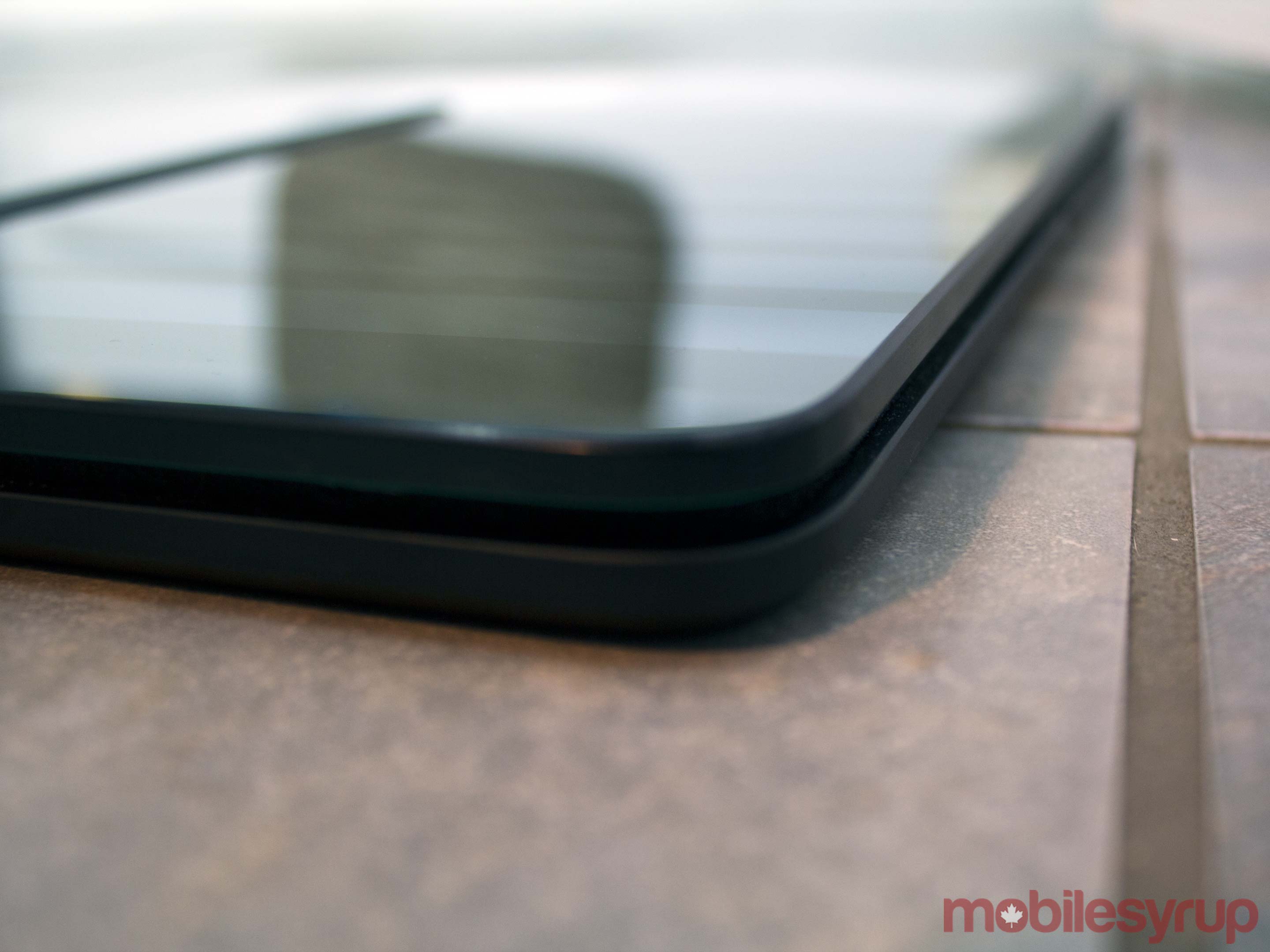 Someone with a fast wave of pressure along the arterial tree would be considered to have a ‘not optimal’ PWV, and someone with a slow wave would have an ‘optimal’ PWV. An optimal PWV means that a person’s overall cardiovascular health is in line with what a health professional would consider ‘healthy.’

Note: Of course, no home based medical product should or can be used to provide a definitive diagnosis on a person’s health, PWV is a standard in measuring arterial stiffness, which could be an indication of heart health. Always connect with your health practitioner to discuss health concerns. 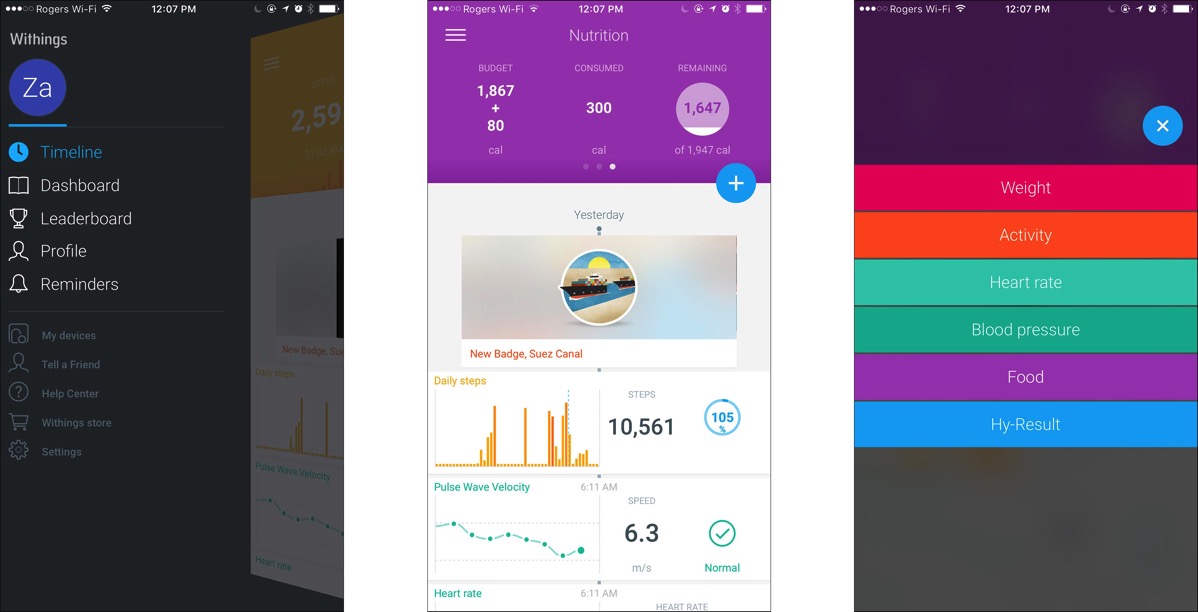 The application for the Body Cardio Wi-Fi scale left some things to be desired, however.

As a whole, the app provides you with a holistic view of your current health. Within the application, you’re able to see readings from the scale. Upon opening the application you can see your step count, most recent weigh-in, PWV reading and your food diary — if you’ve recorded that.

The application also becomes your hub for any Withings, allowing you to connect your devices, see battery life and customise the products to your liking.

What I didn’t like about the application was load times and interaction with graphs. At times I found the app slow to load new weigh-ins, as well as slow to refresh upon a swipe down to force refresh the application.

When using the more detailed graph view of the applications health metrics I at times found the pinch to zoom a bit cumbersome, with it not behaving exactly how I wanted.

Overall, none of the issues I experienced resulted in me disliking the overall scale experience. But, they are issues that Withings should investigate.

A great experience, with little to be desired

The Withings Body Cardio Wi-Fi Scale takes the successes from the company's original Wi-Fi connected scale and adds upon it. With the new Pulse Wave Velocity feature and built-in battery, users will be able to get a better view of their overall health and make improvements, seeing the cause and effect of their exercise in real-time.

I've spent over a month with the Withings Body Cardio Wi-Fi scale. At first, I was expecting to use the scale for a few weeks and call it a day, but I needed more time -- I needed to see my data over a longer period. With that being said, I can definitively say that I recommend this over other Wi-Fi connected scales I've tried.