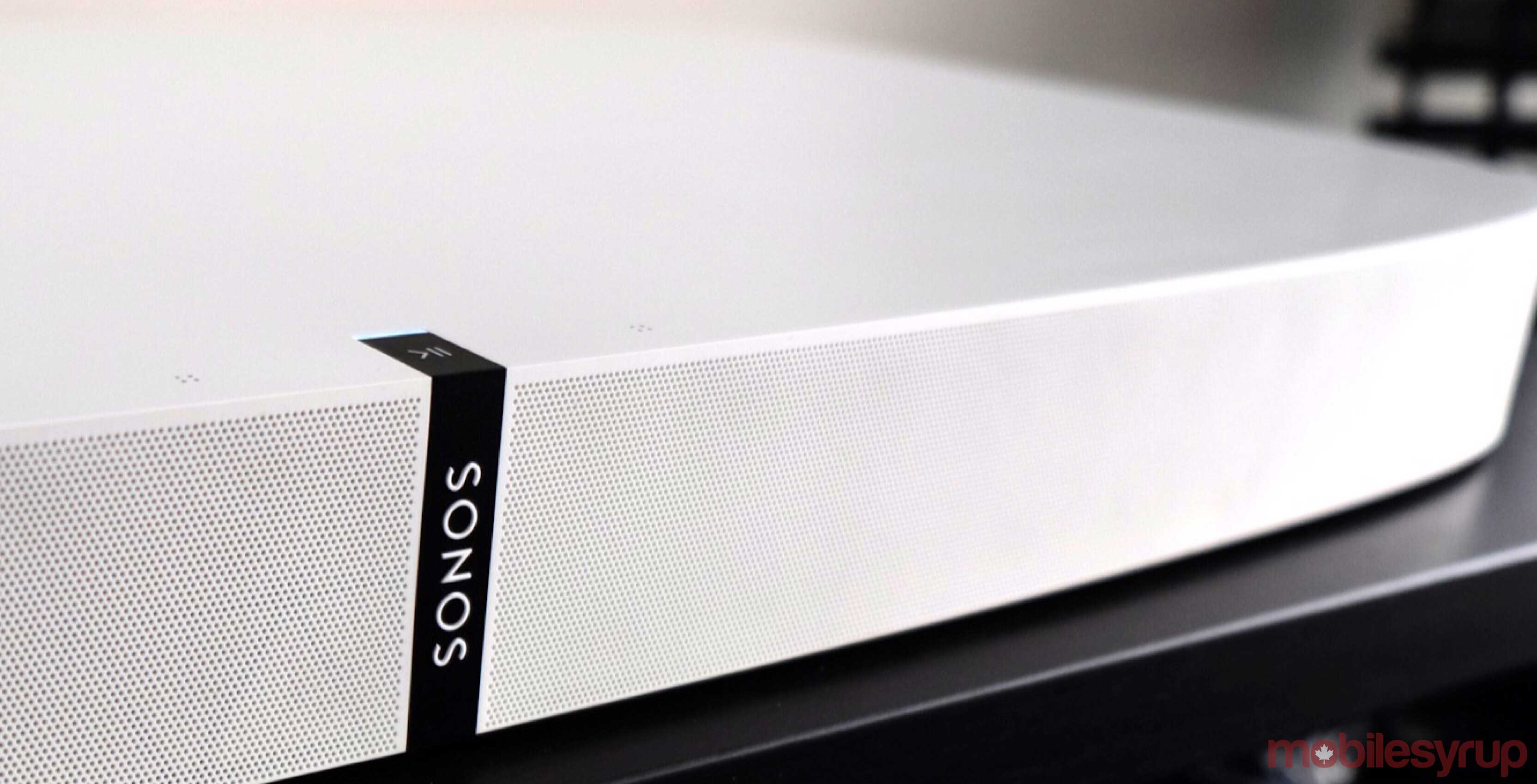 Flattening a speaker generally doesn’t end up sounding good. It’s one reason built-in TV audio has gone downhill as bezels erode and panels get impossibly thin. Sonos may have solved both the audio and space issues in one stroke with the Playbase.

In a hands-on with the new speaker, I came away impressed with the resonance Sonos was able to accomplish in such an unusual form factor. Unlike the Playbar, which looks every bit a sound bar, the Playbase is like a slab that may be more visually divisive. For a company that has openly marketed its merits sonically and aesthetically, the Playbase is something of a gamble.

Having it at home to test, away from Sonos’ controlled environments, I got to see and hear how much of a boost it really delivers.

Playing to the base 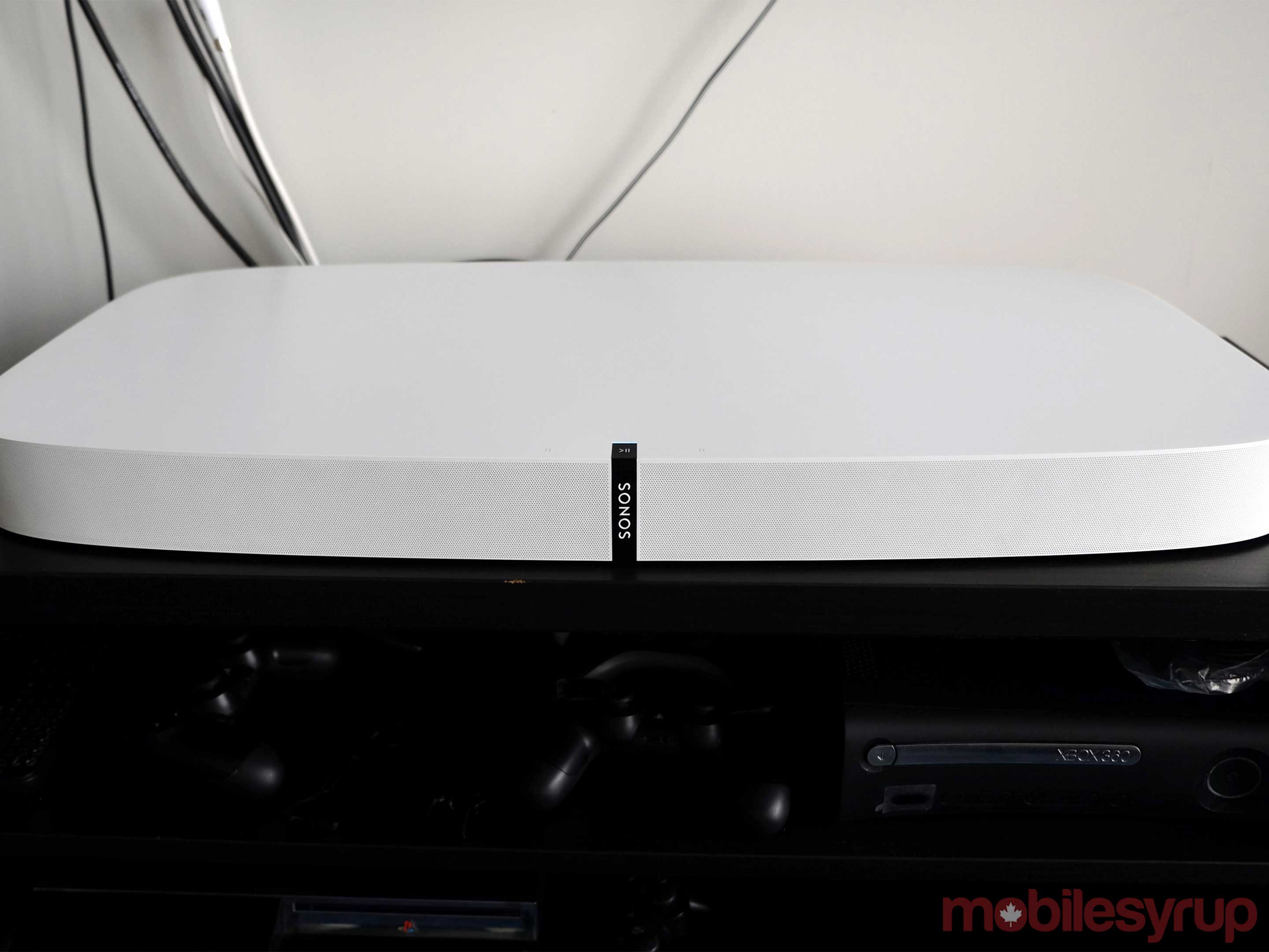 At only 2.3-inches thick, Sonos managed to flatten the Playbase enough to make it less conspicuous when the user wants it that way. It is 28-inches wide and 17-inches deep, so this isn’t a small product, but far from massive. It should ideally fit into any living room or basement. Weighing in at 19 pounds doesn’t make it too heavy either.

Sonos says it can fit nicely on a lower shelf in an entertainment unit too. That seems strange, given the speaker grill does wrap around the corner. If the bass response partially comes from those corners, would any of that be lost? Sonos says no, and I wasn’t about to find out because I’m was of the mind the Playbase is meant to be unfettered.

Besides, it’s able to handle up to 75 pounds of TV weight on top of it. If you aren’t interested in wall-mounting your flat-panel, this speaker can handle just about any model with a stand. The tricky ones may be the larger models of 65-inches or larger that use legs instead of a central stand. So long as there’s enough space for it to slide underneath, it can work.

I’m in a different situation where I have a wall-mounted TV, but would prefer not to have a sound bar. I had the Playbar for a year, and never bother to mount it because I had enough of invasive installations. Like previous speakers, I laid the Playbase on the unit in front. 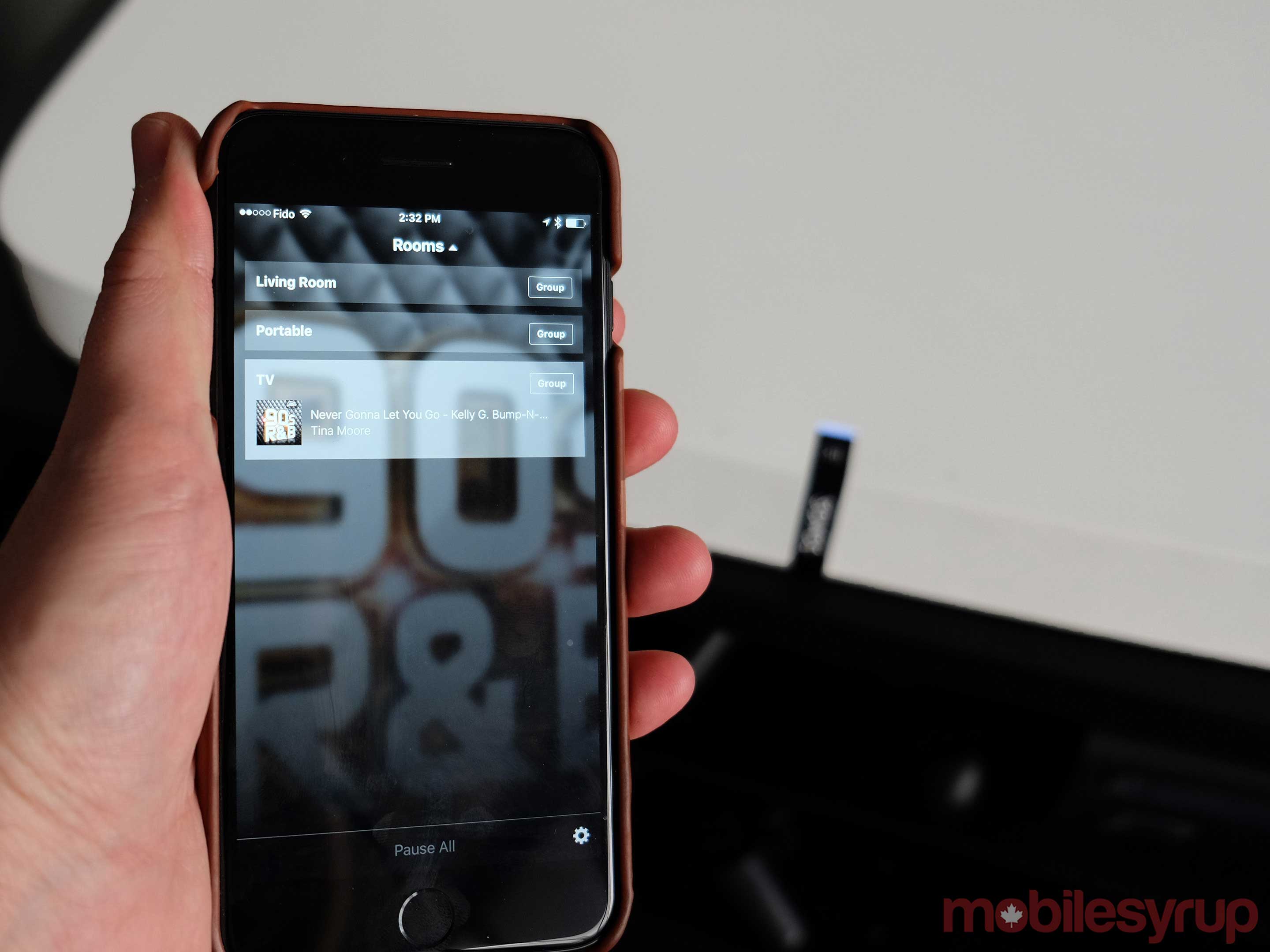 As per usual with Sonos speakers, the setup was fairly quick. The only rear ports are the power cable, Toslink optical audio and Ethernet. Built-in Wi-Fi rounds out a modest connectivity layout. There is no Aux-In port like the Play:5 has, so it’s not as easy to connect the Playbase with older TVs where adapters could bridge the gap. The lack of HDMI may also raise a few eyebrows, given the speaker’s intention.

Adding the Playbase was the same as adding any other Sonos speaker through the app. I ran through the steps and was up and running within minutes. In most cases, the TV’s own audio would have to be set to an external audio source, so that the internal speakers don’t respond to volume commands from the remote. Sonos smartly melds both together, allowing the TV remote to control the Playbase’s volume during playback.

Trueplay, which is still only available on iOS devices, is a feature in the app to calibrate audio performance by tuning the speaker to the room it’s playing in. Tuning the Playbase did make a difference in spatial separation, and I would recommend doing that no matter where the Playbase is placed.

Android users can get around the restriction by using a friend or family member’s iPhone to perform the tuning process. Once tuned, it doesn’t matter which device is then used to stream to the speaker.

The Playbase blended right in on the app, and showed up in Spotify as an option to stream music directly. Treating it like any other speaker in the Sonos ecosystem felt natural, much like it did with the Playbar. 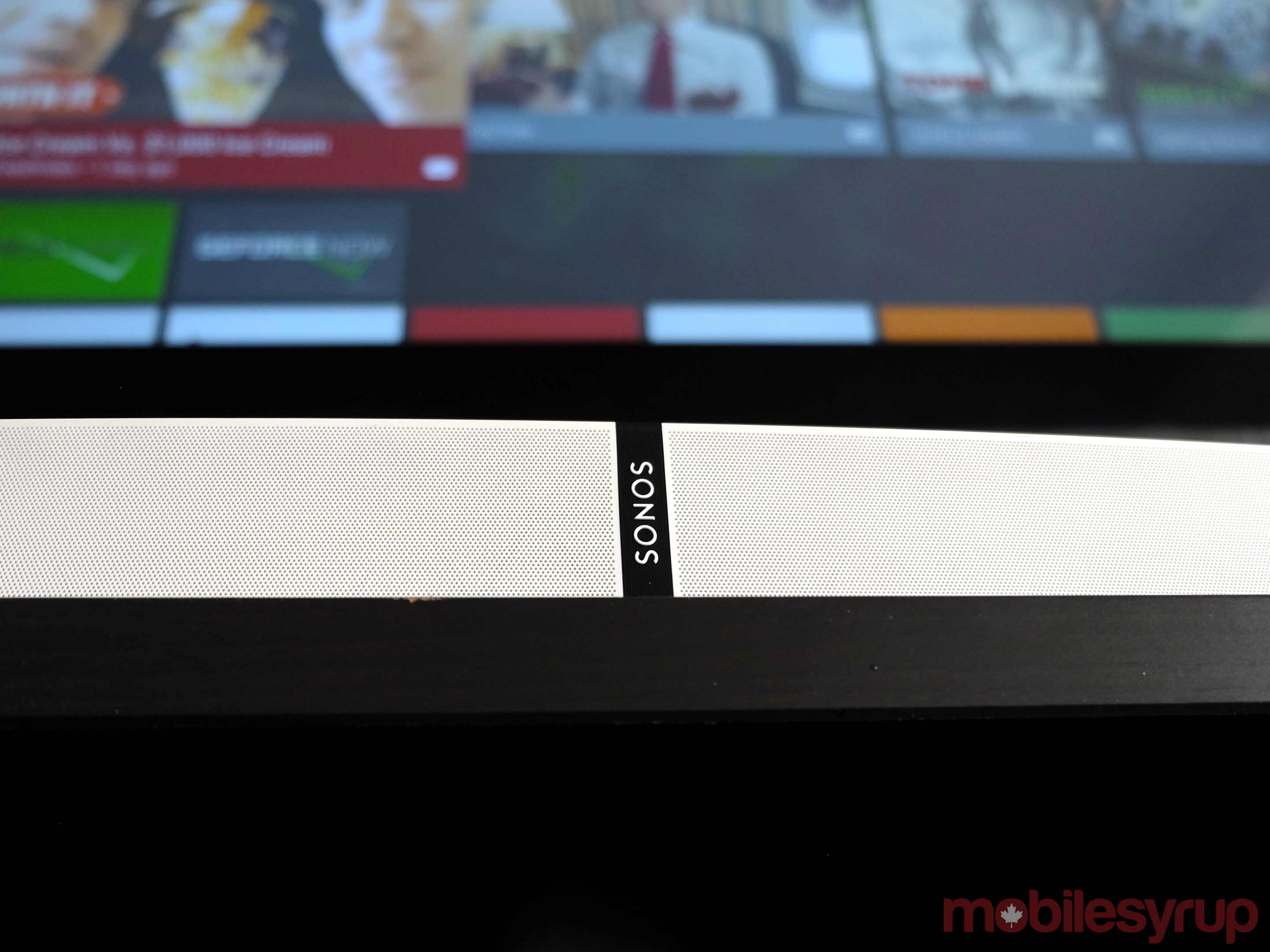 One caveat worth noting is how the speaker handles TV audio and music. By default, the Playbase is set to automatically accept a TV audio signal it receives through the optical port. This can supersede streaming music, potentially creating confusion on which audio signal takes precedence.

For example, I was streaming a hockey game on the TV via NHL GameCenter and Chromecast. I decided to listen to music and began streaming music from Spotify. The video signal remained, while the tunes were playing. Seemingly out of nowhere, the music randomly stopped and the TV audio returned.

Why? Because the intermission was commercial-free, the Playbase recognized the TV’s audio once programming recommended, thereby automatically bumping Spotify. This also happened while watching a show via an over-the-air digital antenna. The fix was to go into the Sonos app to ‘Settings’ > ‘Room Settings’ > ‘(Speaker name)’ > ‘TV Setup’ and ‘Control’ > ‘TV Autoplay Off.’

In other words, to create the scenario I just described of playing something on the TV, with music from a separate source, I would have to toggle that feature on or off manually. 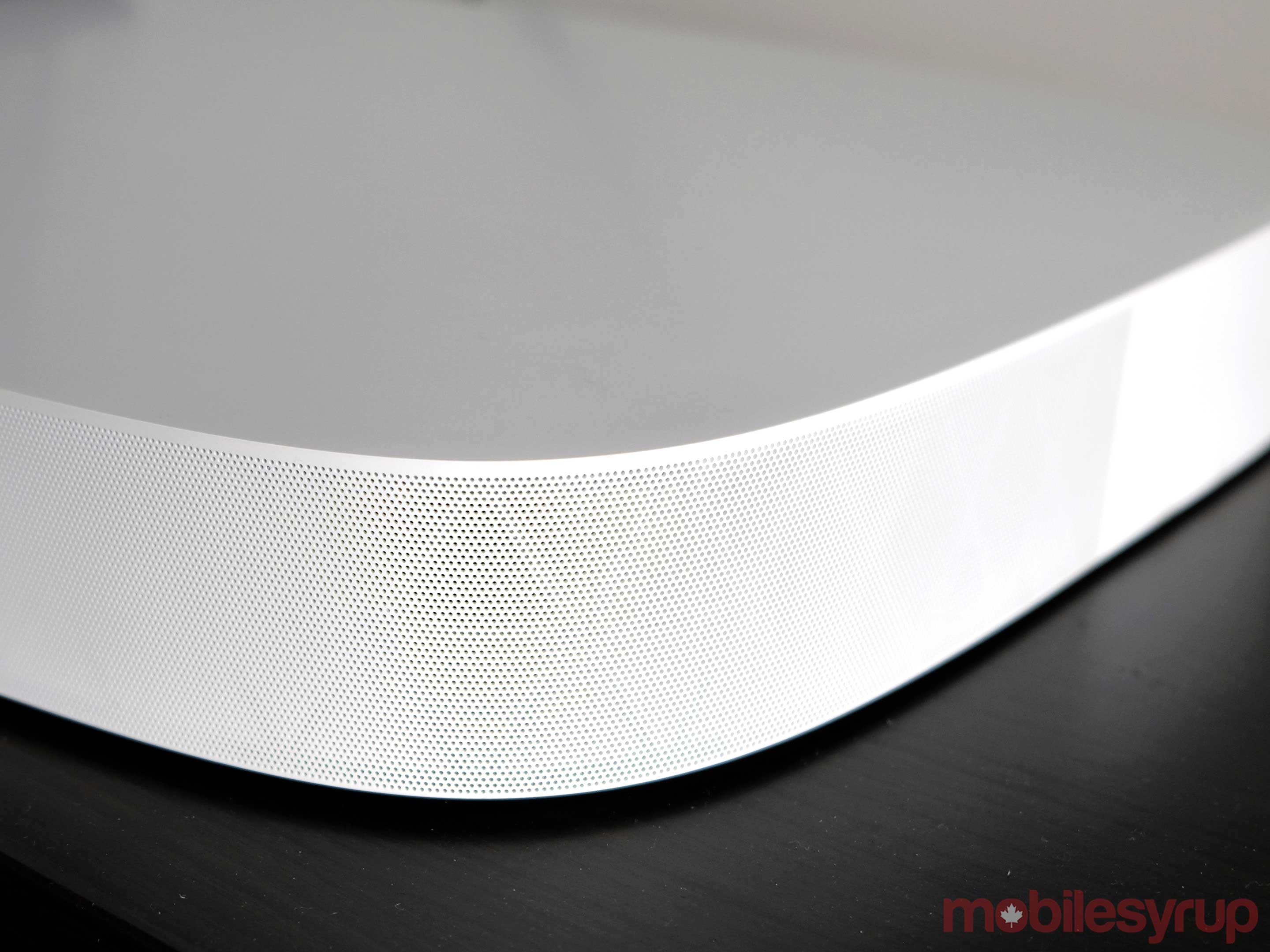 It was easy to view it as a minor inconvenience, simply because the Playbase sounds so dynamic. At 50 per cent volume, it was already loud enough. At 75 per cent, vibrations in the room were palpable. There is a lot of power packed into its flat frame, and I can confirm the bass is improved over the Playbar.

I didn’t have a Sonos Sub to test it with, but there is little doubt the Playbase would benefit from the extra lift in the low end. It’s probably overkill in a condo or apartment, where the Playbase alone more than does the job. Adding two Sonos speakers, be they Play:1s, 3s or 5s, for a surround setup is also probably not a necessity in a smaller space. If I were to do it, though, I would just get a pair of Play:1s. There are some limitations here, however. Not every set top box and TV has pass-through capability, so you could have a 5.1-surround system, yet not be able to use it all the time. Not only that, but DTS and Dolby Atmos aren’t natively supported either.

The beauty of the single setup isn’t just the way it takes advantage of the space below the TV, it’s how well it handles the differing audio sources running through it. Movies and TV shows sounded great, with clear dialogue and thunderous effects. It was a nice mix, with neither skewing too far, unlike some speakers that may be good at resonating explosions, yet terrible at dialogue.

Music was every bit what a Sonos speaker is expected to deliver. The loudness setting is on by default, and it shows. The clarity that comes in spite of it is what makes the Playbase compelling as more than just a TV speaker. For instance, if I had a Play:5 in the same room as my TV, I would move that and use the Playbase instead. It would be redundant to have them both in there together.

It also didn’t matter what the genre was. Hip hop, jazz, classic rock — the Playbase played them all with verve. Sonos likes to play up how its engineers and designers have varied musical tastes, and it shows. This speaker doesn’t favour one genre over another, like Beats has tended to do. 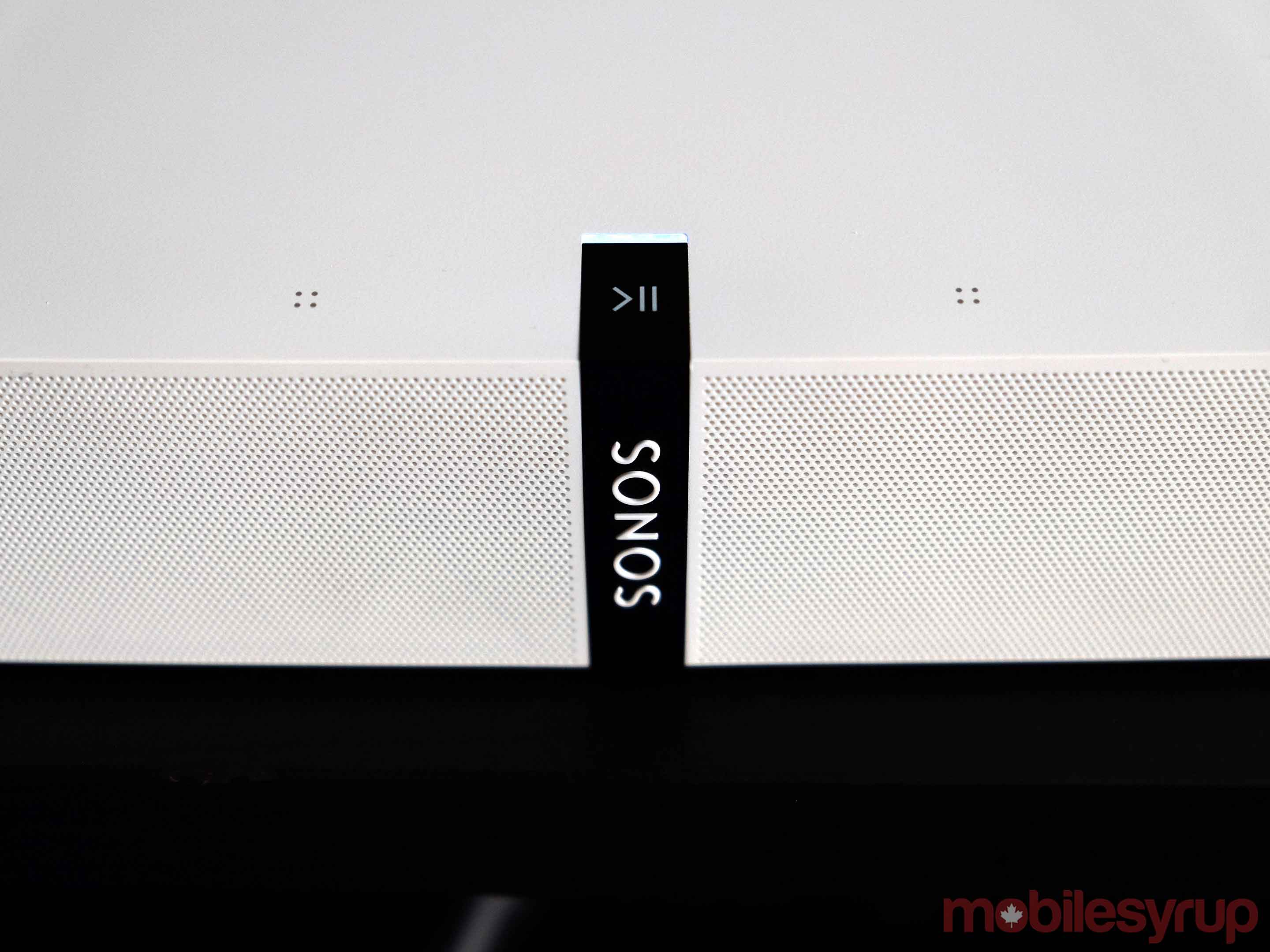 It’s an obvious question whether the Playbase supplants the Playbar. In some respects, I would say it does. Bass is definitely better, the touch controls (a la the Play:5) are convenient and the EQ on the app seems to be more responsive. Plus, I prefer the flatter form factor because in lieu of a TV, I can put set top boxes on it.

Sonos isn’t scrapping the Playbar, and apparently has no plans to, so it’s a binary choice for the foreseeable future. Wall-mounting or aesthetic preferences make it easy. They use the same software and are subject to the same updates, making most of the differences entirely subjective.

Given the Playbar came to market four years ago, I’m inclined to give the Playbase more of an edge for the internal components. It may have a better wireless antenna and improved airflow inside to go with the deeper bass response.

Both speakers benefit from having at least one wall fairly close based on how sound bounces off it and helps fill a room. The Playbar has more of a sweet spot and vertical resonance because of how it can angle up. The Playbase does better laterally, making the sweet spot wider by comparison.

Part of the appeal here is based on what’s to come. Sonos has already confirmed Amazon Alexa integration is coming. While not officially available in Canada yet, that is probably going to change sooner than later. Whether Siri, Google Assistant and Cortana are also integrated remains to be seen, but the likelihood is high that Sonos will at least try.

Either way, the Playbase is expensive. At $899.99 CAD, it is a hefty cost. Even more so if you start adding in a Sub and a couple of Play:1s. The longevity of Sonos’ speakers suggests a successor product won’t come out for a while, so this is a longer-term purchase, rather than an impulsive fix. Getting people to replace existing audio setups with receivers and sound bars already in tow may be tough to do at that price point.

As different as every pair of ears is, you would be hard-pressed not to like how it sounds. Especially when it can effectively kill two birds with one stone by bridging TV audio and music into one effective speaker.