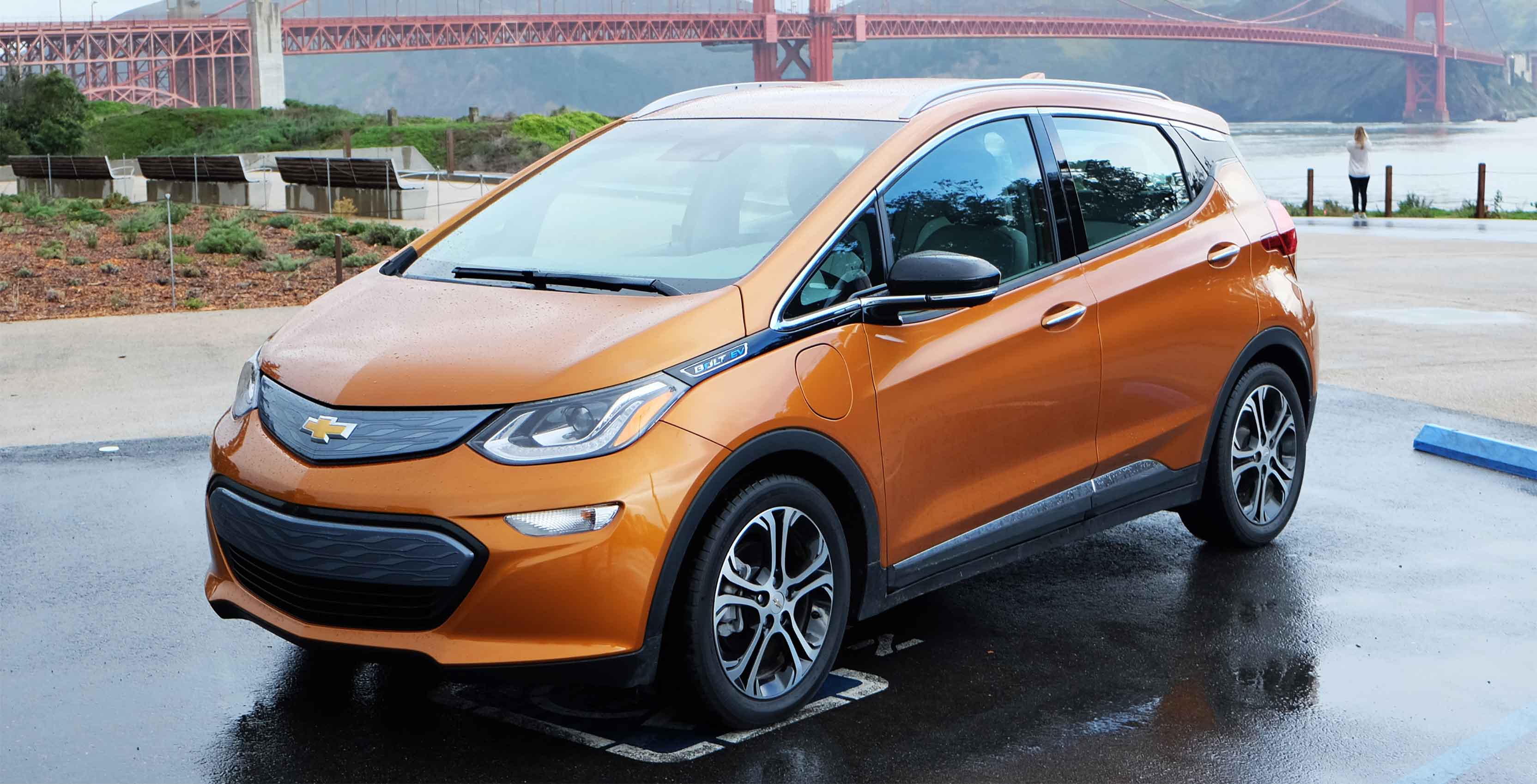 You would have to be behind the wheel to understand how driving an electric car is a different experience than a typical gasoline one is. The Chevrolet Bolt EV is on its way to Canada, and with a more affordable price tag, it’s within reach for many.

One of the unique traits about electric cars is that they are inherently more connected too. Some of the smartphone integration certain makes and models have today were influenced by the electric and hybrid vehicles that have hit the road going back at least five years. 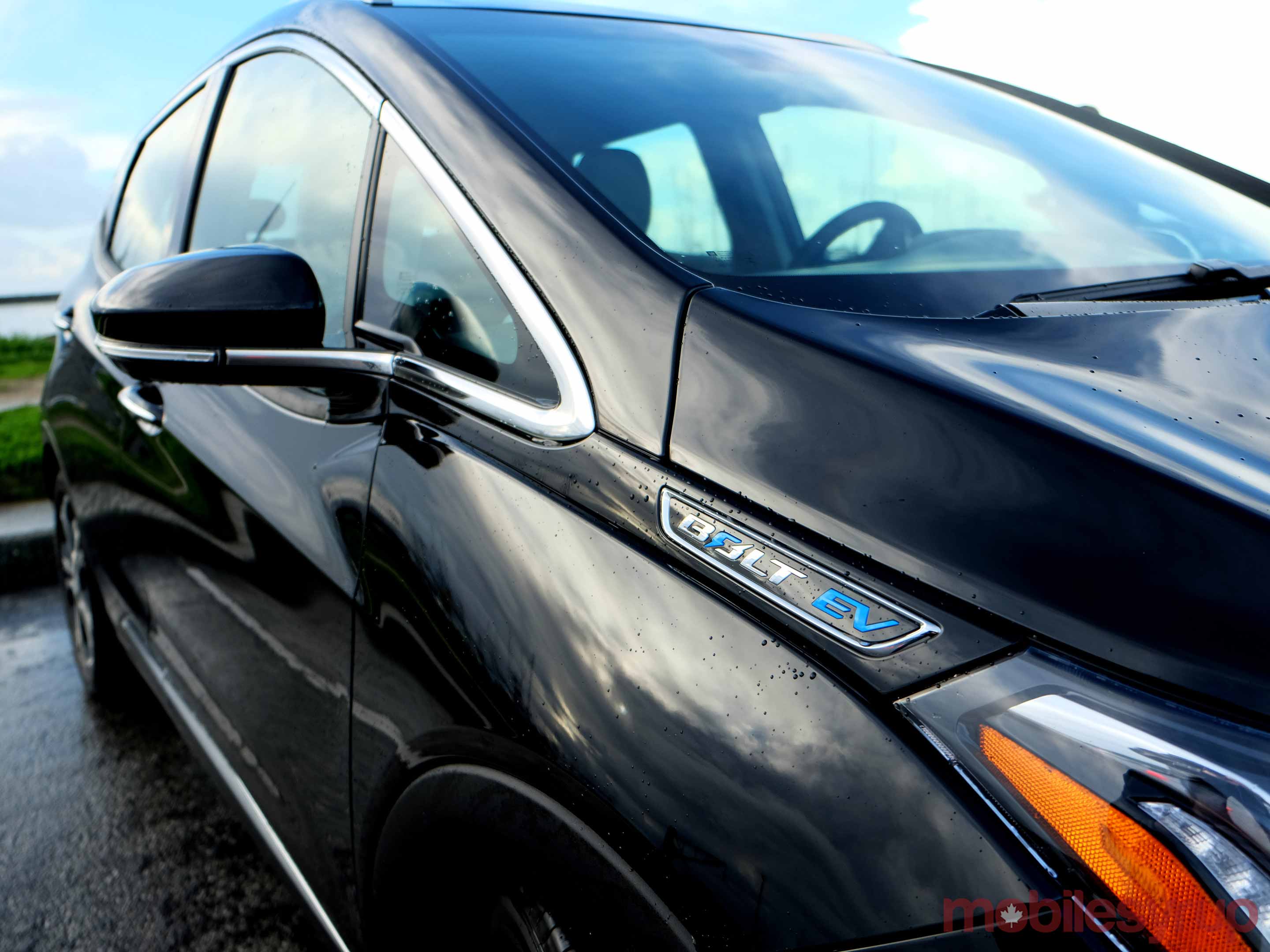 For example, remote start, door lock/unlock, in-car diagnostics — all of those features were standard when I first test drove a 2012 Ford Focus Electric for a week almost five years ago. I could log in on my phone and see everything, from the battery level, current range, odometer, diagnostics to even how quickly it was charging. The built-in SIM card didn’t offer in-car Wi-Fi or LTE at the time, but its feature set wasn’t unusual in the electric vehicle (EV) category.

Tesla has also focused on that area, having launched the Telsa Motors app for iOS and Android. EVE offers extra support for the infotainment system inside that also taps into that connectivity.

Which brings me back to the Bolt. In a way, it’s a circle that has completed itself. With the same connectivity many GM models have since adopted, coupled with the ability to understand more on how the car and its battery work, I came away impressed with the overall package during a media test drive in Northern California. 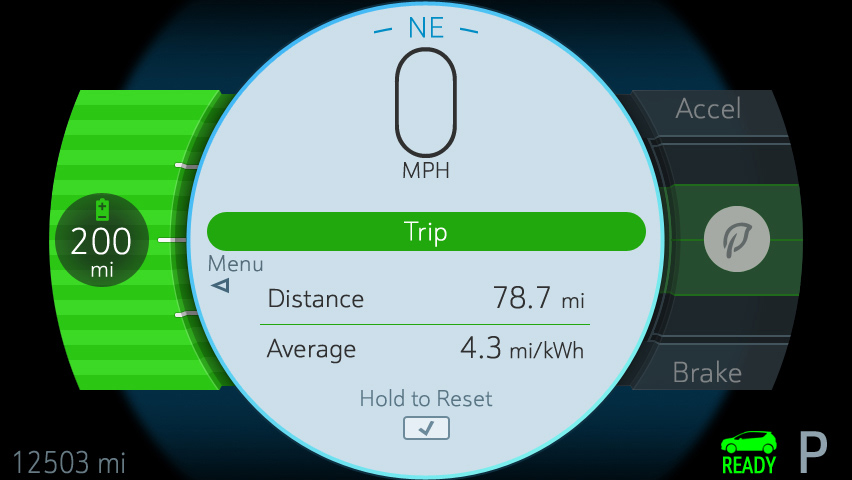 To my mind, the three biggest hurdles necessary to overcome in making EVs viable for the mass market were reducing range anxiety, building a supporting charging infrastructure and bringing the price down.

The first one is attained, for the most part. At a maximum of 383km per charge, range is much closer to gas. That is a fluctuating number, mind you, but a huge improvement from the 100 to 120km I remember being limited to with the Focus Electric back in 2012. I had never looked at an instrument cluster as often as I did then.

The second one is what will require the most patience. Finding places to charge still requires some searching, though that’s what the free MyChevrolet app (iOS and Android) can do on the fly. Even the infotainment system can help find one when utilizing a data connection.

DC Fast Charging at public stations will enable up to 145km of range in 30 minutes of charging. That’s not bad, especially if you can kill time with a cup of coffee or a meal. 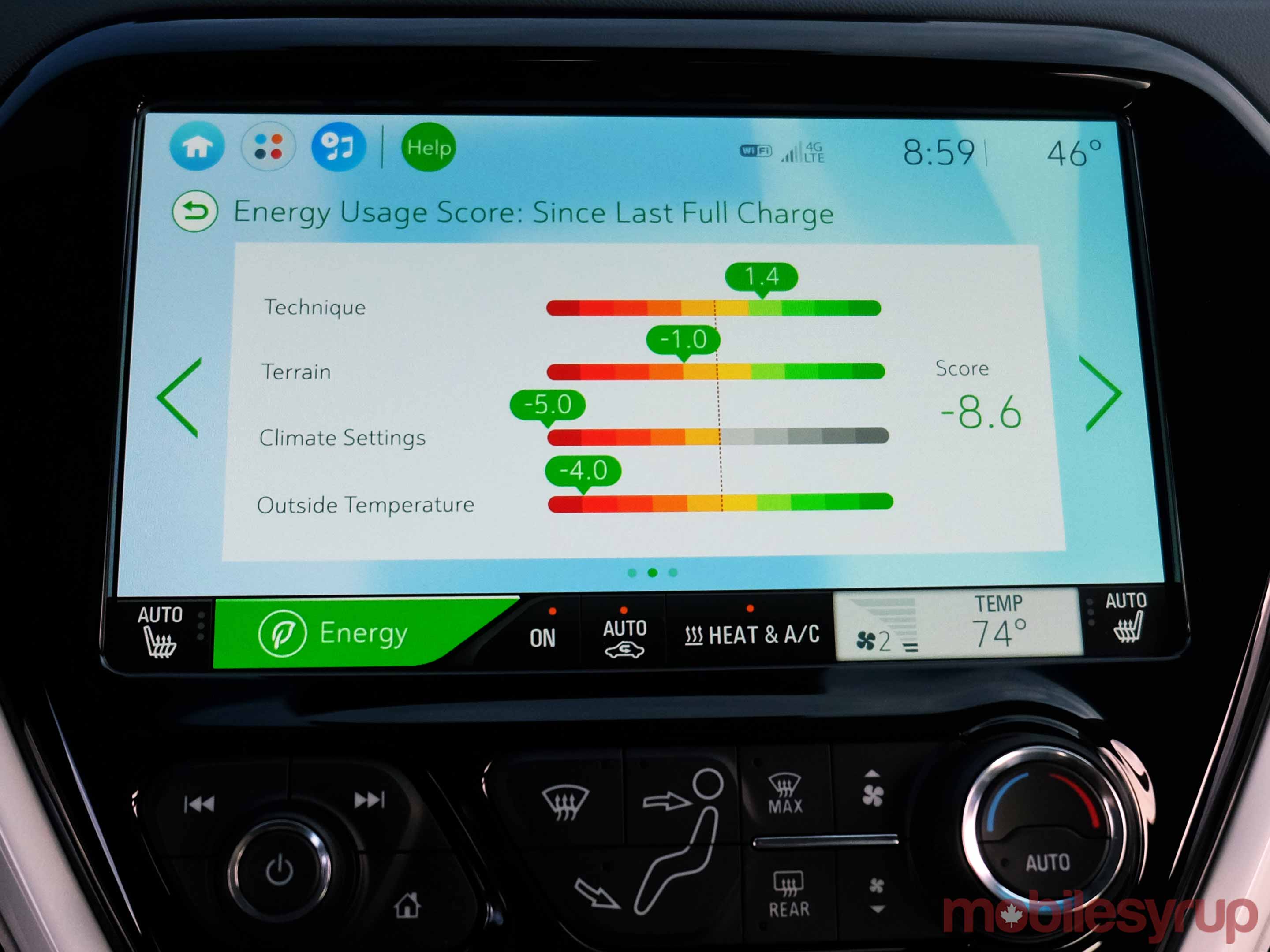 While charging the car’s battery from a standard 120-volt outlet at home is an option, it’s really a non-starter. Installing a 240-volt charger, like that used for washing machines and dryers, makes more sense. It can fill up to 40km of range per hour, meaning the Bolt can go from empty to full in 9.5 hours.

Chevy will roll that as an extra into the cost of the car, including installation. For the moment, this applies to homes, but condos are another story. Condo boards would have to approve any installation, and assuming only one or two people in an existing building may want to be EV owners, it’s hard to see most boards approving of something that doesn’t benefit everyone.

Since parking spots are officially property in most cases, paying to install one in your spot would probably still need board approval. Without that 240V charging station, however, owning the Bolt isn’t so easy. 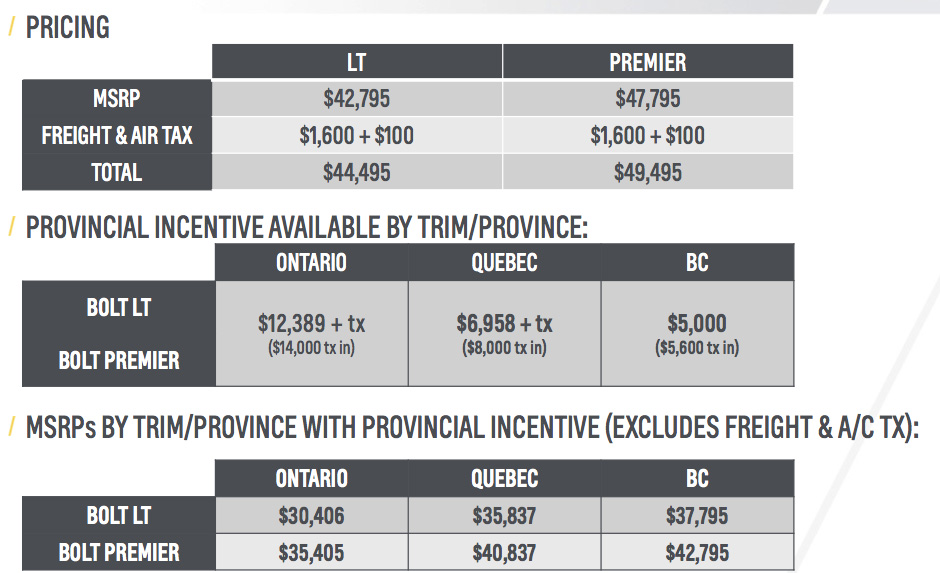 The last hurdle adds intrigue to all this. The Bolt comes in two trims, LT and Premier. The LT will be $44,495 with freight and tax in. The Premier will be $49,495 with freight and tax in. Provincial rebates can reduce the price considerably. Ontario leads the way with a 30 percent rebate on electric vehicles, meaning $14,000 would come back. In Quebec, which has led Canada in EV sales, it would be $8,000, and $5,600 in B.C. 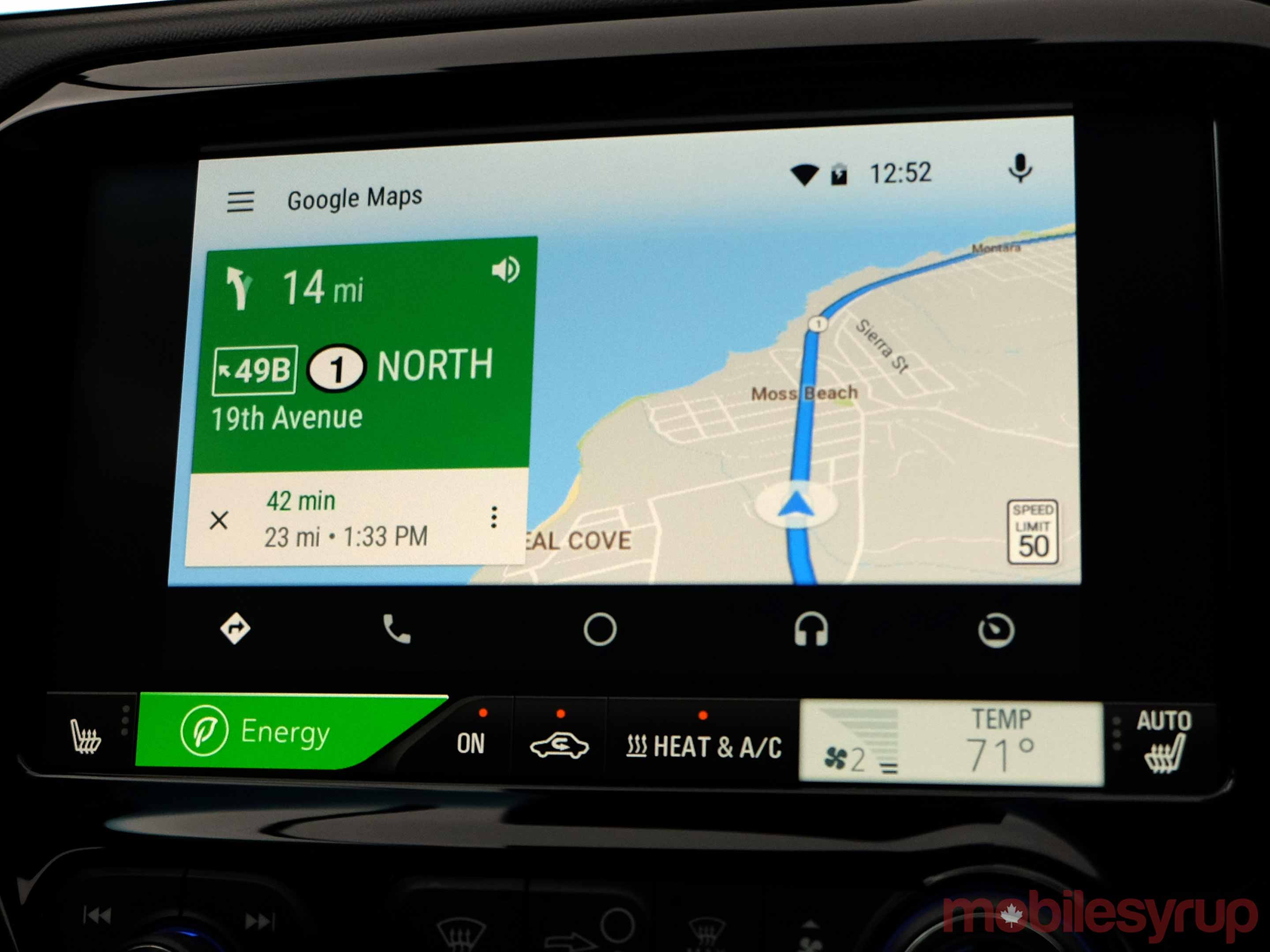 The Bolt falls very much in line with where other GM vehicles currently are in the cabin. In-car 4G LTE with the same data plans and packages. CarPlay and Android Auto both supported. Bluetooth hands-free with voice activation button on the steering wheel. Fully integrated diagnostics and battery information laid out in the dedicated “Energy” app on the main widget-based interface. The MyChevrolet app offers extra functionality, especially when away from the vehicle. With Apple Maps and Google Maps (and soon to be Waze) available through their respective projection platforms, Chevy doesn’t offer any other navigation option inside.

The 10.2-inch capacitive touchscreen bears all of it. The extra real estate enables CarPlay to have five icons on each row, instead of the usual four. Android Auto’s card layout looks big and highly legible. Even Chevy’s own interface is tastefully designed and makes great use of all the room.

Tapping Energy on the home screen took me to a series of diagrams and layouts itemizing the battery’s performance and how my driving impacted it. It’s how Chevy thinks it can gamify driving the Bolt to some extent. The biggest battery killers outside of actual driving are braking, heating/AC and lights. The infotainment system and six-speaker Bose car stereo aren’t battery hogs, apparently. 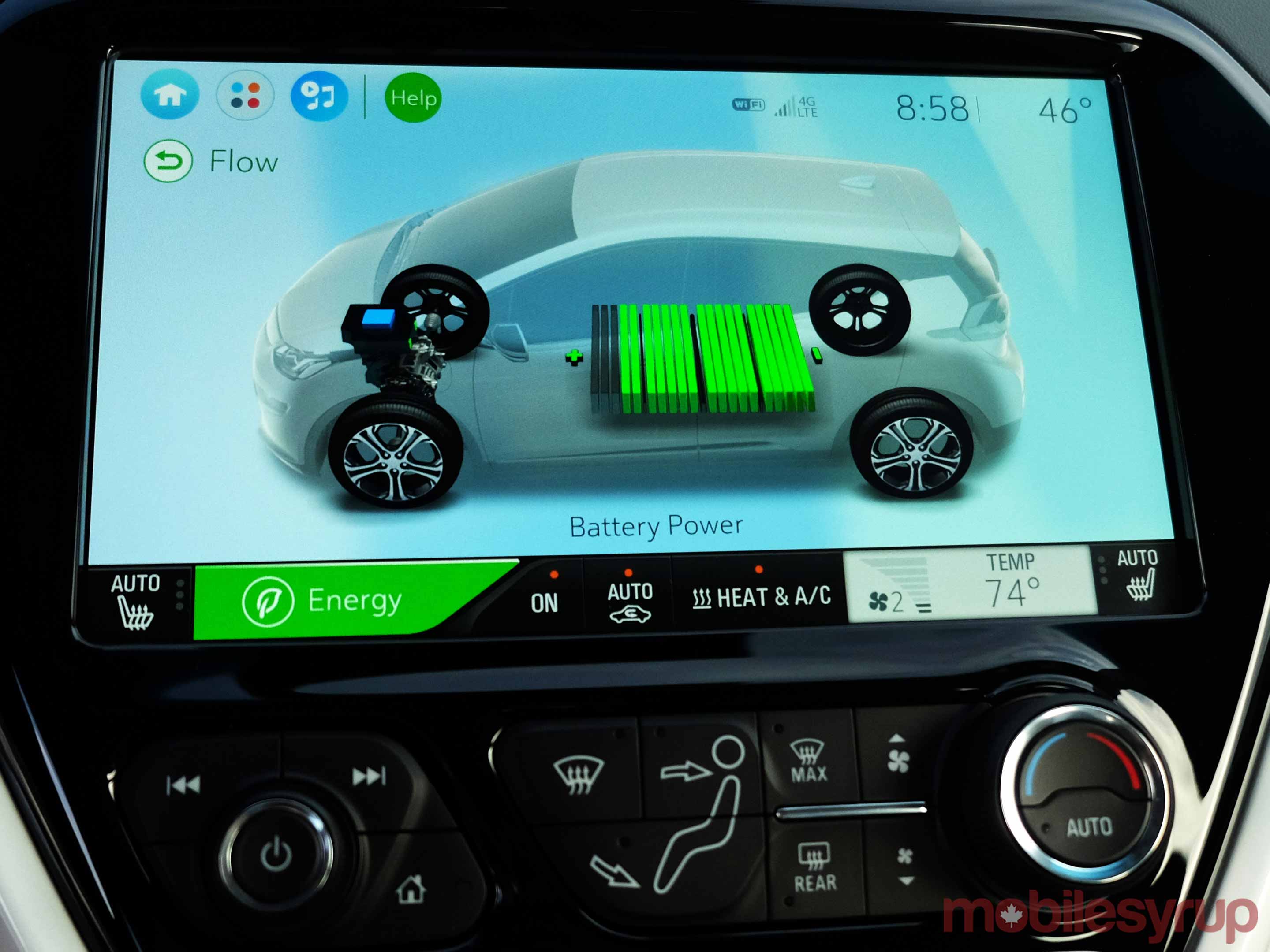 Regenerative Braking, or “Regen on Demand”, takes lost kinetic energy that would normally be lost when applying the brakes and routes it back to the battery. Chevy calls this “one-pedal driving” and it can be triggered from a paddle to the left of the steering wheel and putting the gearshift in Low mode.

What happens is the car decelerates and stops automatically without touching the brake pedal. At first, it was one of the weirdest things I’d experienced driving a car, but soon grew to like it, especially in stop-and-go and coasting situations where it served best. Until I touched the gas pedal again, the car didn’t move. It was as if I was holding the brake or in park.

The energy saved from not touching the brakes went back to the battery, which was noted in the instrument cluster in front of the steering wheel. It resulted in range being gained rather than lost. Mind you, the buyback is modest at best, amounting to 5 percent or 19km of range, overall. Not substantial, but in a pinch, it can make a difference. 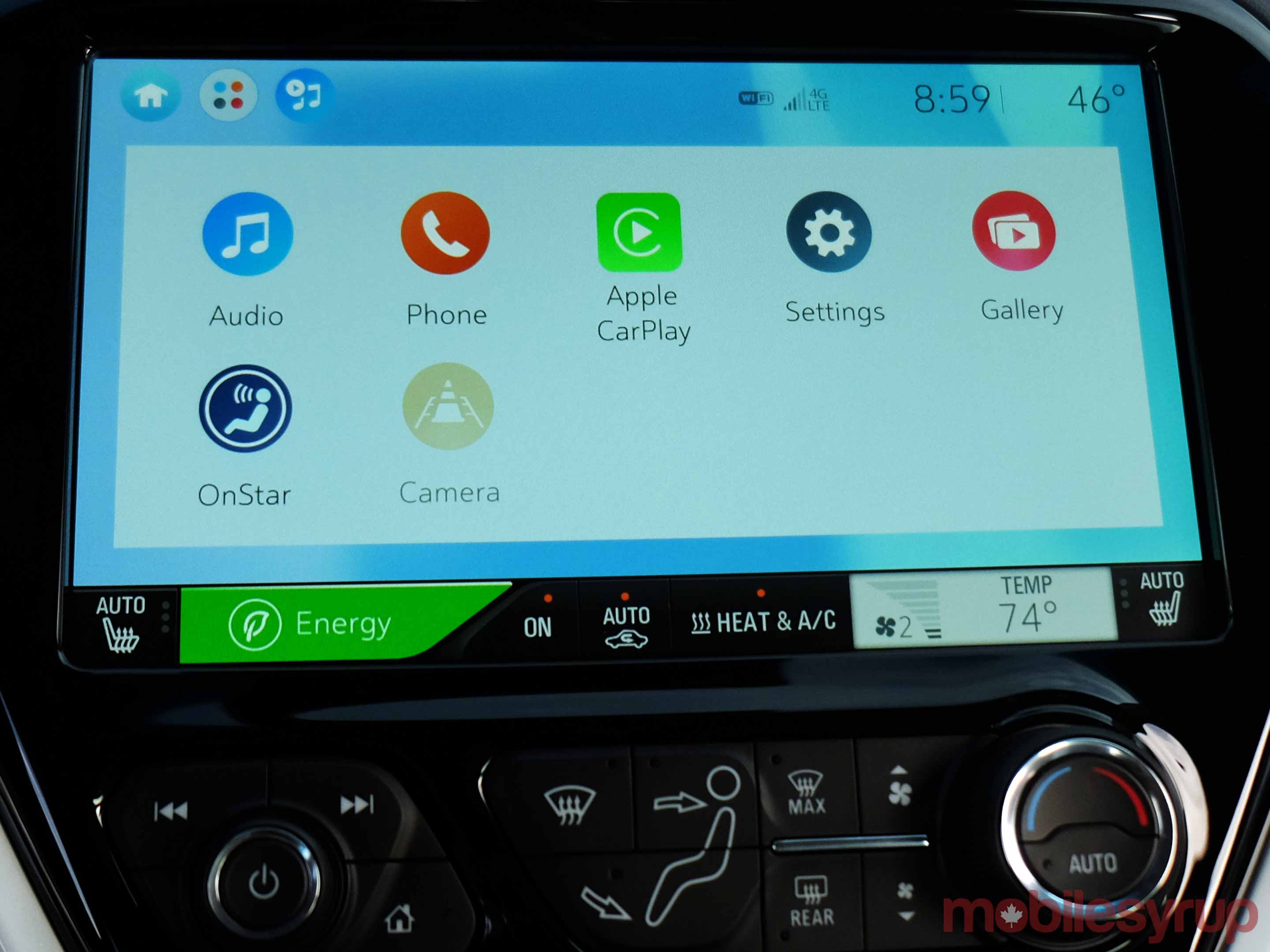 Much of this data is accessible in the app, presenting a clearer picture of the vehicle and your driving performance when you’re not even in it. While that’s not brand new, I can say there’s a connection I could feel knowing I could check in on the car with a simple tap. That pressing feeling of remembering whether I locked the doors or not doesn’t matter when I can do it from the app. Knowing where the car is located if it’s gone missing for any reason is another example.

I could send navigation instructions to the car ahead of time, though I didn’t get the chance to see how that would integrate with Apple Maps or Google Maps. There wouldn’t be much of a point since both of those apps can basically do the same thing. Finding charging stations was easy through the built-in map that points them out. At home, I could use the app to program the car so that it only takes in a charge at off-peak hours to lower hydro costs.

The car also has its own phone number, so in a case where your own phone is out of range or has a poor signal, callers can dial the vehicle’s number to get a hold of you. That’s not a new feature, either, as GM has rolled it out to several models already, but it’s neat to have anyway. 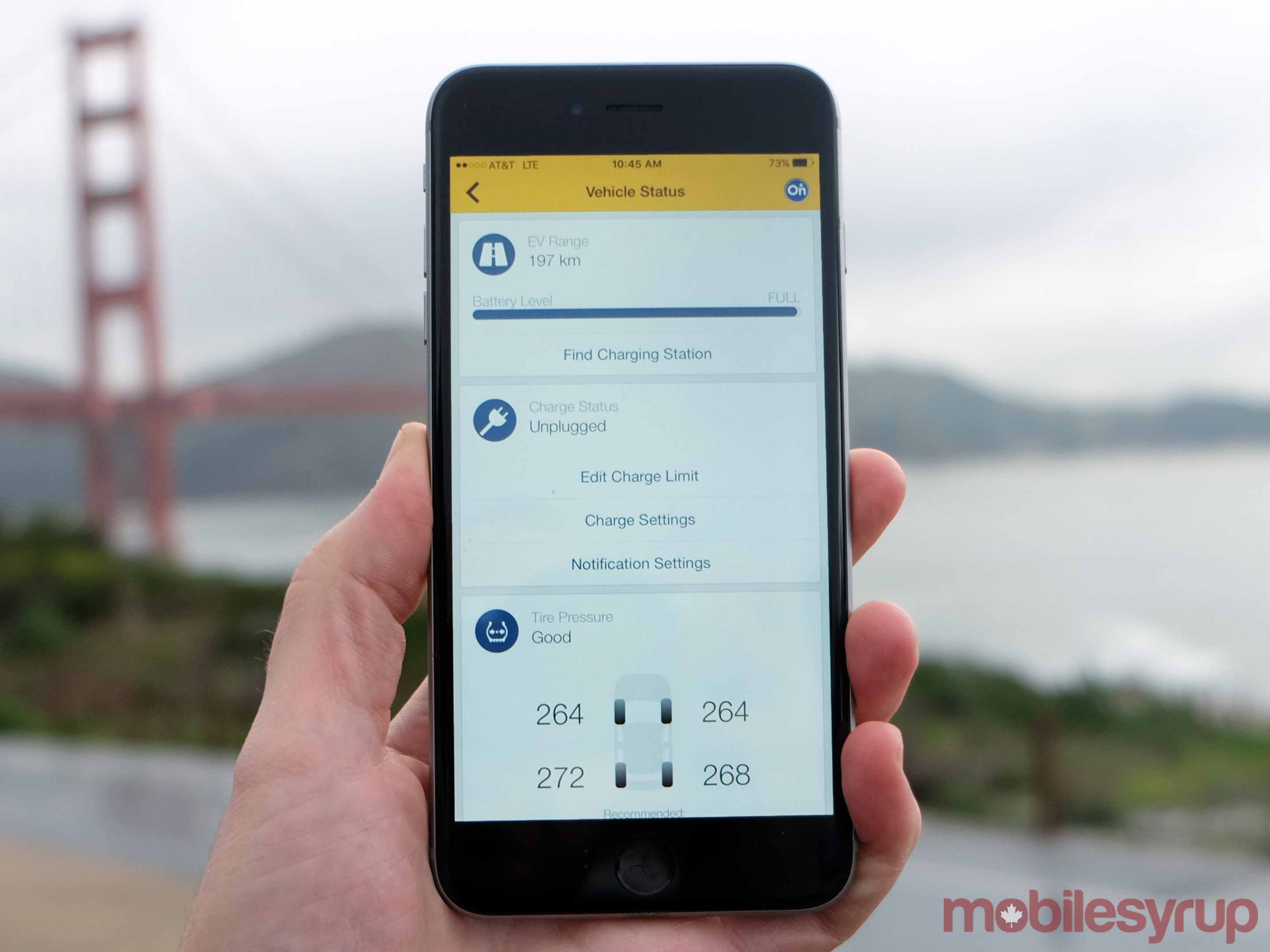 The Bolt isn’t revolutionary because of the connectivity it provides, but because it is the most affordable EV in Canada to date.

Driving an EV in the harsh Canadian winter will affect range, which is likely the case for the Bolt too. Still, even at an estimated 20 percent cumulative loss in winter months, there would still be well over 250km. Even with all that, this is a car I would consider buying. I like the idea of going full electric, and the infotainment mix inside is one of the best I have seen from GM, at least from a hands-on perspective. Only further testing would indicate if that would be a lasting impression.

From that connectivity standpoint, Chevy adds some extras to the Premier trim: rear camera, surround vision for a 360-view of the car while parking and a rearview mirror camera view. For an extra $565, you can get wireless charging (Qi and PMA), two extra USB ports for the back seats and the Bose 6-speaker system upgrade. The LT trim doesn’t offer any of those, unfortunately.

How much actual inventory will be available in Canada, particularly in those three provinces remains to be seen. If you want to go ahead and get one, earlier would probably be best after they begin hitting dealerships in February. The rest of Canada will get them by the end of the year.