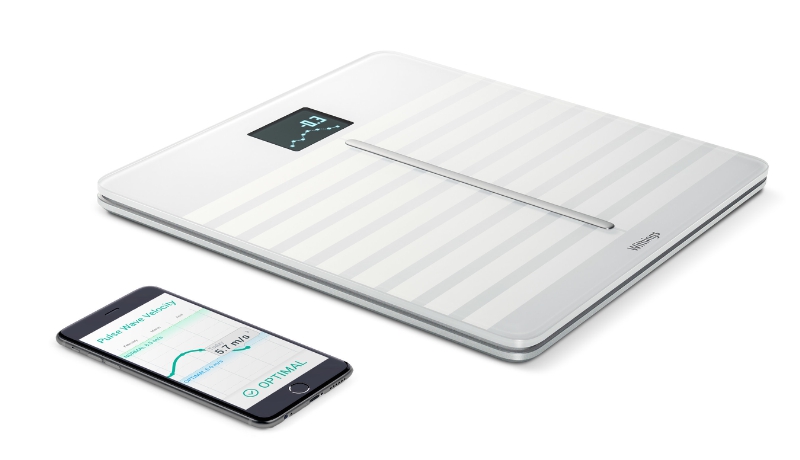 Most people have a scale in their bathroom and some weigh themselves as much as once or multiple times a day.

The French wearables company Withings has taken one the world’s most detested health products, the scale, and turned it into a tool that effectively measures a users health in several categories.

Withings, recently acquired by Nokia Technologies for $191 million USD, today announced the release of Body Cardio, a connected scale that measures your weight, fat mass, muscle mass, water and bone mass. While the company has released connected scales with health tracking capabilities such as these before, Body Cardio, priced at $179.95 USD (which can be purchased online for $199.95 CAD) is the first scale to measure cardiovascular health.

“Thanks to all-new sensors, Body Cardio can detect when blood is pumped from your heart, and it measures the rate at which pulse waves move along your arteries. The stiffer your arteries, the more quickly blood moves through your body. Conversely, a low pulse wave velocity indicates more flexible arteries and lower blood pressure.”

In addition to the Body Cardio, the newly released Body, priced at $129.95 USD, which is not available in Canada, was also made available today. The Body doesn’t include Pulse Wave Velocity, but does however include the majority of other fitness tracking features included in the Body Cardio. As an added bonus, both connected scales also tell users the weather.

Both scales deliver certain pieces of information just by standing on it. However, the corresponding app, Health Mate, delivers even more information about what those numbers mean. Body and Body Cardio will prompt users to connect the Health Mate app via WiFi or Bluetooth upon setting it up, which can be done by pressing a button on the right side of the scale.

Users can only see their Pulse Wave Velocity, as well as a variety of other health information by logging on to the app. Rather than simply showing users their own health data, however, the app curates suggestions for users on how they can work on the specific areas measured by the scale. Weight trend graphs and goal setting are examples of features that are only available through the Health Made app.

“Body Cardio is the most advanced device we have ever made. Body Cardio redefines how people use connected scales, providing them with a tool to manage their weight as well as heart health. It is like getting information from your annual physical every day,” said Cedric Hutchings, vice president of digital health at Nokia in a statement sent to MobileSyrup.

The Verge reports that the Withings, now a subsidiary of Nokia Technologies, will stop selling the 2009 Smart Body Analyzer scale and the 2013 WiFi Body Scale in favour of the new Body and Body Cardio.

Beginning today, the Body and Body Cardio from Withings are exclusively available at Apple Stores worldwide and through the company’s website, Withings.com. The corresponding app, Health Mate, is available for free on iOS and Android.