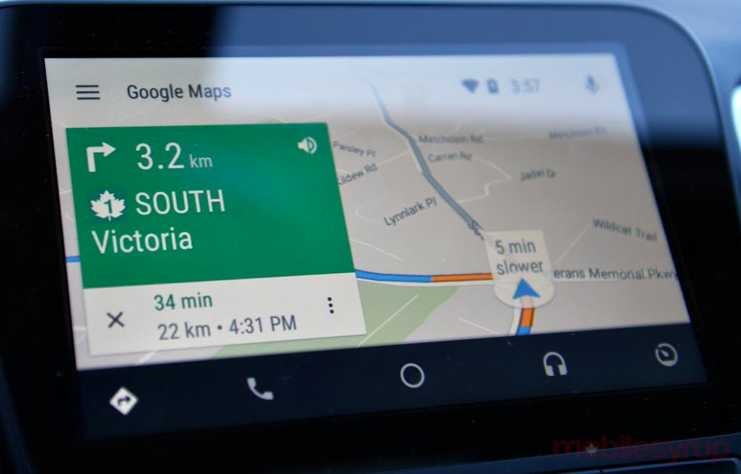 Like virtually every vehicle GM makes, the 2016 Chevy Malibu is getting an infotainment upgrade that will include Apple CarPlay, Android Auto, 4G LTE and a new feature called Teen Driver.

I got to try all of these on a long test drive in Vancouver Island, part of which included remote areas with no cellular connectivity at all. Unlike the low-priced and (really) compact Spark, the mid-sized Malibu doesn’t get its connectivity out of the gate on the most inexpensive base model.

The car is offered in four trims (L, LS, LT and Premier), plus another Hybrid model. The L doesn’t have the option for the infotainment features, so it’s the other trims that figure into this. The chart below indicates what is available and what isn’t. The entries marked with an ‘S’ come standard, the ‘O’ is optional and the ‘—‘ symbol means they’re not available at all. 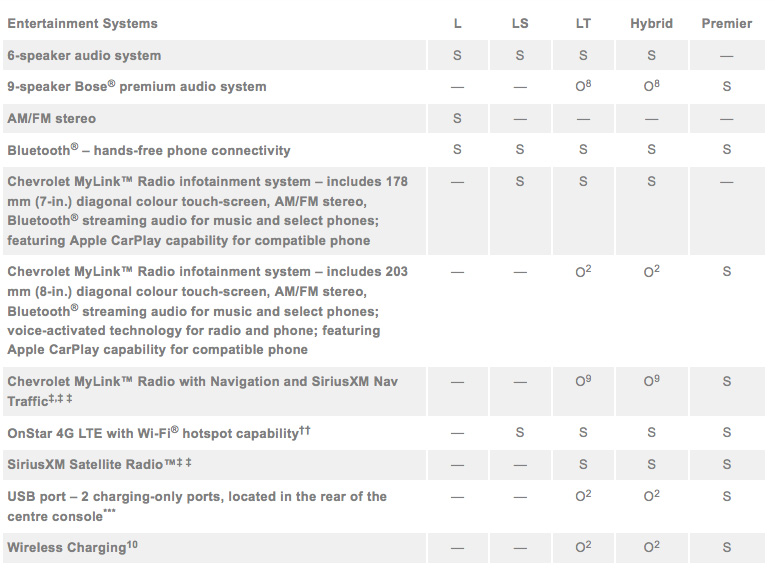 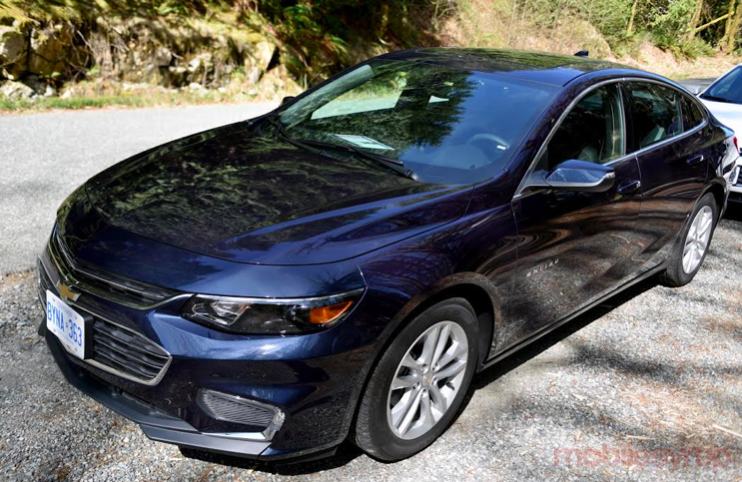 There is a difference between the 7-inch and 8-inch displays, though it’s not exactly indicated on the chart. The interface and layout differs depending on which size screen is in the vehicle. The feature set is essentially the same, but the look and feel is noticeably discrete.

The test Malibu LT I drove had everything in its infotainment system (with 8-inch display) except for wireless charging, which I wouldn’t have been able to try out anyway as I didn’t have a compatible phone or charging case in hand. What’s neat is that the charging pad the phone rests on is air conditioned, keeping the phone cool to regulate the temperature rise from filling the battery. This works much the same when the phone is plugged in via USB. Just resting it there can help keep it cooler. 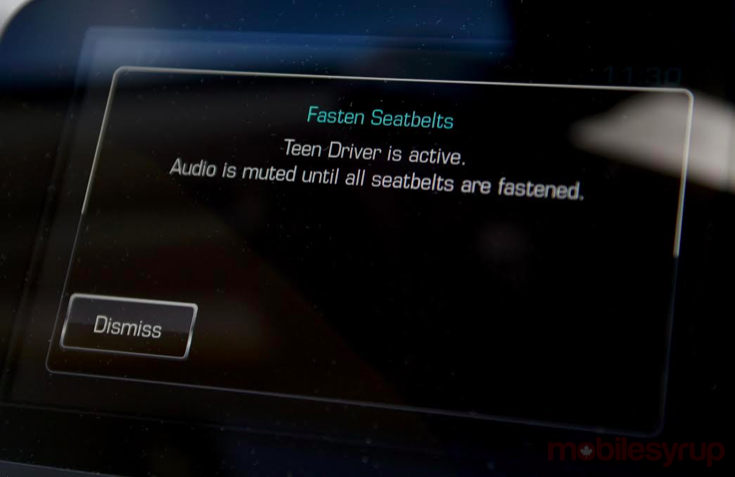 One of the advantages of having an antenna on the car is how it pulls in a better signal. I’ve experienced this before in vehicles with in-car Wi-Fi, when the phone itself struggled to get better reception.

The Malibu was limited in the same way a phone would be, however. When reception died out on the phone in a remote part of Vancouver Island, it did so on the in-car Wi-Fi as well. But when I got it back during the return leg of the long drive, it proved to be steady and consistent the whole way through.

When in-car 4G LTE was first launched with select GM vehicles in 2014, I found bandwidth speed to be patchy, at least in the Greater Toronto Area at that time. Granted, these are anecdotal cases, but the way the connection works, it’s supposed to latch onto whichever network is the strongest in any particular geography.

Up to seven devices can be connected to the hotspot at once, though data plans remain expensive. Having two users stream Netflix at once can drain that bucket quickly, so the connection can be both a serene blessing and financial curse for families with young children.

Automakers have tried in vain to disable or neuter drivers’ smartphones, while filtering through some of the functionality they would always want access to. In fact, the entire auto industry and aftermarket vendors have struggled to find effective methodologies in achieving the elusive balance between safety and convenience.

Teen Driver is, at least in part, a limited attempt to bridge the two together. There are two elements to it. First, the infotainment system is disabled and audio muted until seatbelts are fastened in the driver and passenger seats (assuming there is a passenger sitting there). It doesn’t matter if the phone is plugged in via USB, paired via Bluetooth or connected through Wi-Fi — nothing will pass through. 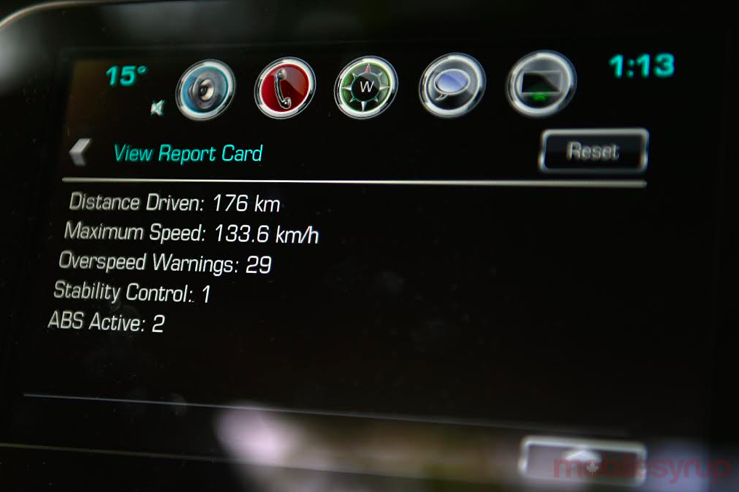 The second part revolves around a “report card” that collects data on how a teen has been driving. Helicopter parents will love this because they can set a threshold for speed and maximum volume for the car stereo. The numerous active safety features in the Malibu, like stability control and forward collision braking are on by default and can’t be turned off.

This works by programming a key fob through the Chevrolet MyLink screen. Parents can then set whatever thresholds they want and save it behind a four-digit PIN code. When the car is started by the programmed key fob, Teen Driver goes into action. The report card notes: distance driven, maximum speed reached, stability control events, antilock brake events, and if equipped, forward collision alerts and forward collision avoidance braking events.

The report card has to be viewed in the car using the PIN code, and manually reset for a new set of results. However long it’s left without resetting, it will tally up the results, but won’t break it down by day, so resetting will likely need to be done often.

The OnStar RemoteLink app doesn’t have a direct line to Teen Driver, so there is currently no way to view the report card from a phone or tablet and then reset it for the next time the teen drives the car.

It’s an interesting concept that is easy to use, and is exclusive to the Malibu this year, so GM is likely using the car as a test case to see how consumers take to it.

There are no surprises here. It’s the same experience you would get in the Spark or any other GM vehicle supporting the two projection platforms. The chart above notes that Android Auto support is coming later, but that wasn’t the case in the Malibu LT I was driving. It worked perfectly with an LG G5 (plugged in with a USB-C cable I brought along with me).

CarPlay was also smooth, with Spotify working fine, and all other core apps running normally. I did note that it booted up faster in the Malibu, a clear indication that iOS 9.3 did add that tweak when Apple released it. Compared to the Spark system I reviewed two months ago before the latest update, the startup time has been noticeably cut down.

If the car has two USB ports, only one can project to the dash screen, while the other is for charging only.

GM considers the Malibu to be “the most connected car in its class,” comfortably beating out others, like the Hyundai Sonata, Honda Accord, Volkswagen Passat and Kia Optima. The level of connectivity and safety features it offers are hard to match, but they do come at a price. The LT starts at $25, 242, which doesn’t come with everything included.

The less expensive LS doesn’t offer much as options, making the LT, Premium and Hybrid the most connected in this lineup. If you can get most or all of them, it’s a good set of features, though the longevity largely rests on CarPlay, Android Auto and 4G LTE.