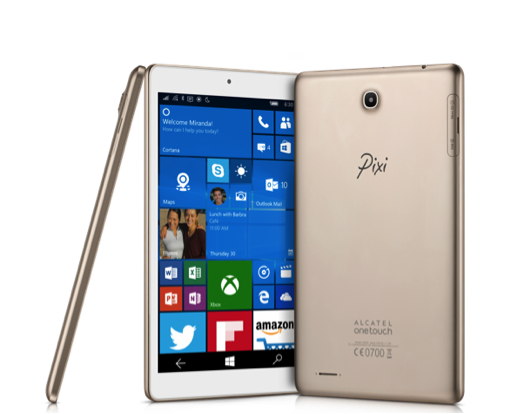 Following the lead of companies like Qualcomm, Samsung and LG, Alcatel OneTouch has teased part of its 2016 device lineup ahead of a full announcement at CES next week.

Among the variety of devices the company plans to bring to the annual consumer tech show, leading its 2016 device lineup is the revamped Pixi family of entry-level smartphones. The Pixi 4 family will include two new 3.5-inch and 4-inch smartphones, as well as a 6-inch phablet and a 7-inch tablet.

Unlike the Pixi 3 family, which was notable for allowing consumers to decide whether their smartphone came Android, Windows Phone or Firefox OS, the Pixi 4 family looks like it will only ship with Google’s operating system preinstalled.

However, that’s not to say Alcatel OneTouch is giving up on Windows altogether; in fact, the company is set to bring its first Windows 10 device to Las Vegas. The company’s new 8-inch tablet is set to carry on the Pixi 3 name, and while Alcatel OneTouch hasn’t said anything its specs, the press release it sent does mention the “entry-level” Pixi 3 will ship with features like GPS, voice call and TV remote control.

Alcatel is waiting until next week to talk about release dates, as well as pricing and availability for each device.

CES starts this Wednesday. Stay tuned to MobileSyrup for full coverage of the event.