After a couple of years spent in a downward spiral, BlackBerry has shifted to a steady if unsure incline. Under the leadership of CEO John Chen, the company has focussed on its core enterprise customers, and building out its security portfolio. It has also infiltrated the messaging market by making BBM available across the most popular platforms, iOS and Android. However, recent events have shown the company isn’t immune to the occasional PR gaffe. 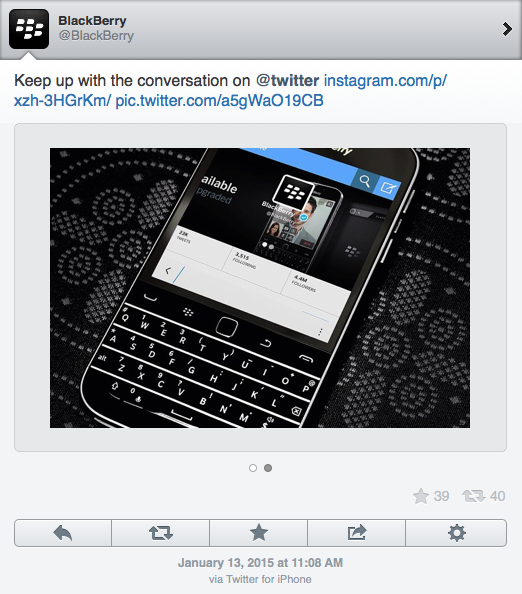 A portion of BlackBerry’s social feed is most likely outsourced, so this is just terrible timing but a blow to its own device strategy nonetheless.

Over on Twitter, BlackBerry is busy promoting the recently launched BlackBerry Classic, encouraging users to “keep up with the conversation.” However, a tweet sent on Tuesday was composed on a mobile device that wasn’t one of BlackBerry’s own. Instead of typing this tweet up on the very device it was promoting, BlackBerry sent this message into the world using an iPhone (or at least via the Twitter for iPhone client). While the tweet has since been deleted, the mistake will live on forever thanks to the wonders of the humble screenshot.

Alicia Keys, BlackBerry’s former Creative Director, once fell victim to a similar mistake, but she declared her Twitter account had been “hacked.”