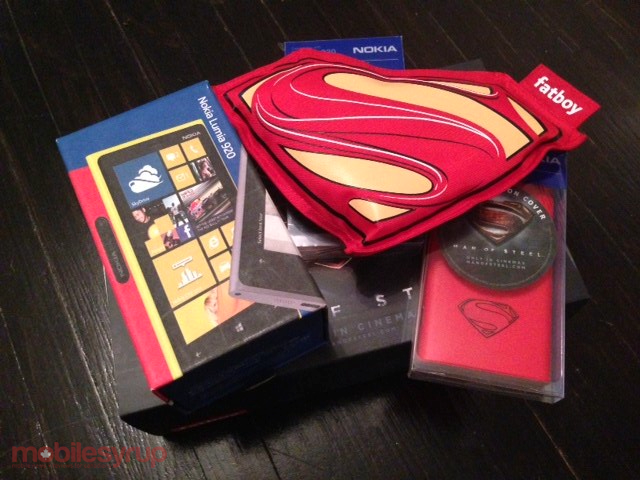 Update: This contest is now closed. We’re thrilled to announce the winner of this limited edition contest goes to Twitter follower realfatapollo. No worries if this isn’t you… our Rogers Samsung Galaxy S4 giveaway is happening now (enter here).

_______
This could be one of the coolest contests we’ve ever held. This is not the ordinary device giveaway, but a special edition of Nokia’s flagship smartphone. To coincide with the upcoming release of Superman ‘Man of Steel’ we’ve received a Superman-themed Nokia Lumia 920 prize pack. Here’s what this gem of a giveaway includes:

Yes, it’s awesome. The winner of the prize pack will also be able to download the exclusive Man of Steel application in the Windows Store, which has Superman content, wallpapers and character info.

To enter this contest all you have to do is either follow us and re-tweet this contest on Twitter (@mobilesyrup), “Like Us” on Facebook (Facebook.com/MobileSyrup), or join us on Google+. All current Facebook, Twitter and Google+ followers are automatically entered. This contest closes on June 14th and we’ll announce a winner shortly after!