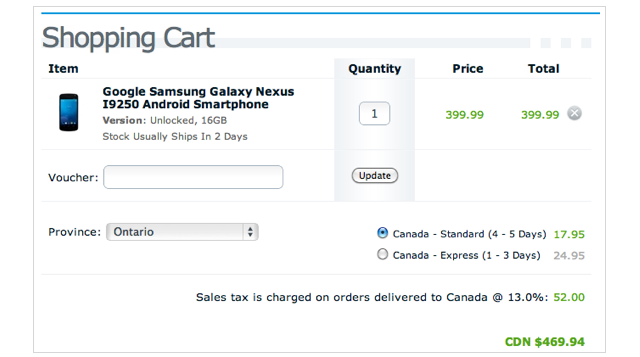 In lieu of the U.S. getting a version of the Galaxy Nexus for $399, many Canadians were understandably upset that despite being so close, they were unable to take advantage of the same offer from Google. Turns out that Expansys, an online retailer with warehouses in Canada, hear our prayers.

The company is selling an unbranded version of the Galaxy Nexus for $419.99. It also turns out that this version is the yakju build, which means it obtains its OTA updates directly from Google (and usually faster than the yakjux variety that Canadian carriers are selling).

Not sure how long this deal will last, but we figured we’d share it while it’s available. Happy hunting!

Check it out here at Expansys Canada.
Via: Frandroid
(Thanks Pierre!)