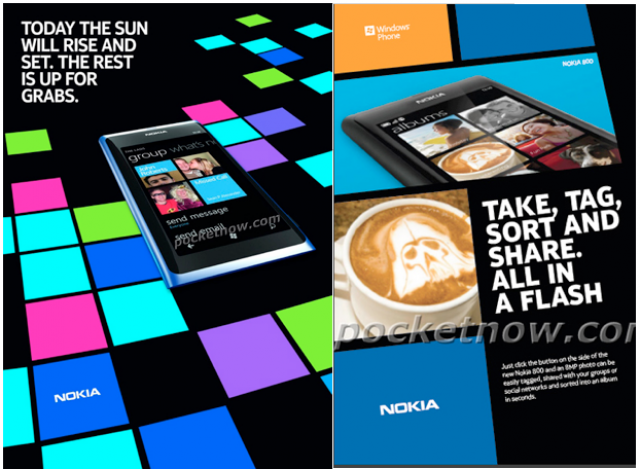 Well, what do we have here? While we don’t know what model the 800 corresponds to, a couple of ads have leaked for Nokia’s first Windows Phone.

Specs are not outlined except for the 8MP camera, but the render looks remarkably similar to the Sea Ray video that was leaked earlier in the year. The design resembles the MeeGo-powered N9, which is constructed from a smoothly-bezeled piece of aluminum. It’s likely the battery on the 800 will not be replaceable, and the screen will be affected separate from the bezel, in typical Nokia style. There is also the faintest hint of a curved glass screen, though they may just be our eyes playing tricks.

Like the N8 and countless Nokia devices before it, the 800 will likely be available in multiple colours. And, as with all Windows Phone devices, it will come with a dedicated camera shutter button on the right side for easy point-and-shoot capabilities.

We look forward to seeing more of the Nokia 800 and its ilk as we near the end of the year.